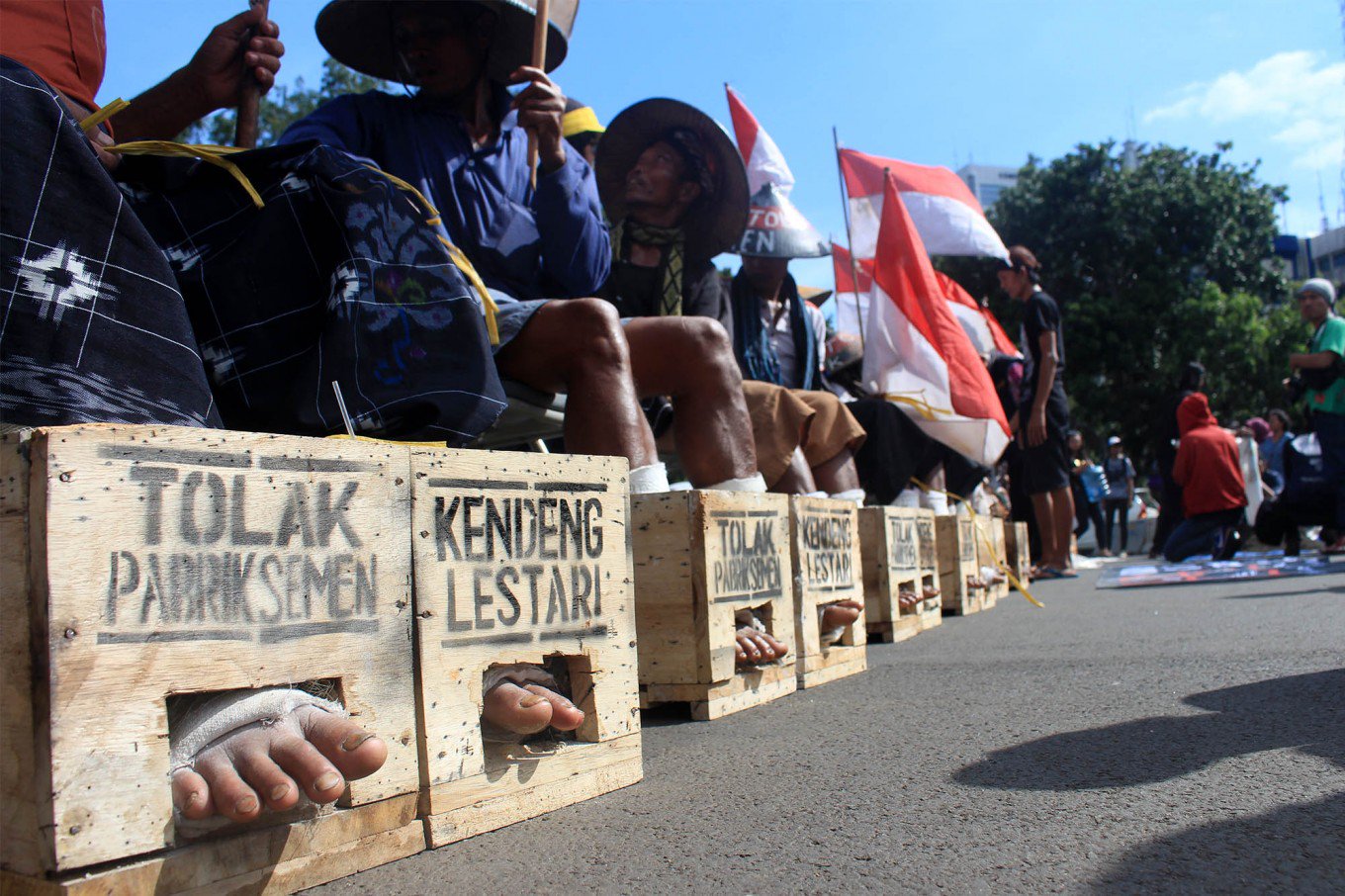 Kendeng farmers prepare to put their feet into concrete blocks in front of the Merdeka Palace, Jakarta, on March 15, to protest the construction of state cement manufacturer Semen Indonesia's factory in Rembang, Central Java. (JP/Bagas Rahadian)

Poverty eradication is high on President Joko “Jokowi” Widodo administration’s agenda. On his election campaign trail in Bandung, West Java, on July 3, 2014, he elucidated how he would address the acute poverty among 29 million citizens, 18 million of whom live in rural areas. A priority program he envisaged was provision of land to 4.5 million poor families.

Farmers would have their own banks and the business-minded would receive capital to start small and medium enterprises. The National Logistics Agency’s (Bulog) role would be expanded.

In short, Jokowi wished to make farming an attractive profession for the young at a time when farmers are aging: 8 million of them are older than 54 years and only 6.5 million are younger – a number that has dwindled over time. More than 56 percent of farmers own less than 0.5 ha of farmland. Jokowi pledged to redistribute 1.1 million ha of land for a million families every year.

This year, after almost three years in office, his administration has begun in earnest his much anticipated land reform program, starting with a plan to redistribute 9 million ha of agricultural land to farmers in rural areas and 13 million ha of forestland to customary communities.

Land reform is part of his effort to narrow the gulf between the rich and the poor, the classic problem that makes economic growth “useless” because the fruits are mostly enjoyed by the wealthy. In 2014, the Gini ratio – the most common statistical dispersion measurement of inequality – was 0.41 and in 2016 it lowered to 0.39. It was still high but better than that of China, the Philippines and Malaysia.

A basic issue that sits in the center of his supporters’ aspirations is the unequal holding of state land. Ever since Indonesia’s independence in 1945, land has been largely controlled by a few elites: politically wired entrepreneurs, the military and Islamic religious institutions.

Today, about 530 forest concession holders control an estimated 36 million ha of land. On the other side, farmers’ land holding has been petering out as tradition compels them to bequeath their property to their offspring. Often, they have to let go of their property to make way for public development projects.

The legal basis of land reform is outlined in Law No. 5/1960. Introduced by the administration of former president Sukarno, the law aims to 1) replace the colonial legal system 2) end land ownership and concession by foreigners 3) overhaul existing land ownership structures and 5) make the legal basis for the implementation of the 1945 Constitution’s Article 33, which asserts that the economy shall be organized as a common endeavor based upon the principles of the familial system; sectors of production that are vital for the country and affect the lives of the masses shall be under the powers of the state; and the land, the waters and the natural resources within shall be under the powers of the state and used to the utmost benefit of the people.

Thus, essentially, Jokowi’s intended land distribution strategy is only one element of “land reform,” as the 1960 law envisages. Rudimentary issues like land conflicts and land ownership restructuring have yet to be addressed.

Jokowi’s initiative has been hailed as a “daring move” that will likely meet fierce resistance from the numerous powerful political, religious and economic elites, many of whom have controlled most of Indonesia’s land long before Indonesia gained independence.

Iwan Nurdin of the Agrarian Consortium (KPA) notes that the agrarian reform has not taken place and the law has never been enforced. This has led to the deepening of land holding inequality, proliferating land conflicts and environmental degradation.

Centuries before Indonesia’s independence in 1945, people made their subsistent livelihood in land, notably forests, they considered their own. But when Soeharto came into power replacing Sukarno, forests were regarded as state land and divided among his cronies as “forestry estate.” Gone were the customary rights of tens of millions of people and so conflicts proliferated. But in 2012, the Constitutional Court reinstated the customary rights.

History shows that enforcing the 1960 Basic Agrarian Law has never been easy. The presence of the formidably powerful elites in control of resources is the hardest shell.

A world-class orator, president Sukarno would insist that the law was meant to end the monopoly of natural resources he sarcastically likened to “colonial practices.”

In the other corner, his political enemies exploited his land reform policy, saying it smacked of communism and linking him with the Indonesian Communist Party (PKI). After tumultuous years, he fell from power in 1965.

In Indonesia, which still nurses wounds from the 1965 massacre, which was blamed on the PKI, “land reform” retains what is perceived as a communist stink. It brings memories back of Lenin, who coined the phrase when he implemented his “land to the tiller” propaganda to win farmers’ hearts and minds. During Soeharto’s 32-year rule, “land reform” was rarely discussed publicly. Among his most remembered programs was “transmigration,” which resettled poor people from the densely inhabited islands of Java and Bali to other islands.

As the political climate leading up to the 2019 presidential election is beginning to heat up, political enemies have also begun firing salvos, renewing their attempt to stain Jokowi’s land reform initiative with the so-called dirt of communism. And the smear campaign is likely to escalate.

Challenges also come from within the government; the Environment and Forestry Ministry, for instance, has reportedly refused to participate in the implementation and rejected the idea of redistributing forestland to the people.

Redistributing 9 million ha of land as part and parcel of Jokowi’s food self-sufficiency goal and commitment to lift people in rural areas from poverty is a small step in agrarian reform.

The absence of a clear-cut government regulation on the implementation of the President’s agrarian reform leaves basic issues in the dark. The only thing the government has made clear is that the land is available in all 34 provinces.

To play it safe, Jokowi has begun to redistribute 9 million ha of “conflict-free land,” thus reducing the risk of further complications and theoretically increasing the probability of success. But fundamental issues such as who the eligible beneficiaries would be, the redistribution process and terms and conditions all remain a wild guess.

Jokowi has no grand plan to settle the countless land conflicts across the country resulting from poor law enforcement and forever posing a serious threat to national stability. Actors in the disputes include the government, private companies, state companies, local people/communities, the police and the military.

Obviously, Jokowi’s land reform has been prematurely launched. However, even though the regulation has yet to be made and the technicalities yet defined, the plan has been widely praised as a daring move and one that was not prioritized by most of his predecessors.

Despite the lack of a clear plan, narrow scope of reformation and poor coordination among related ministries, advocates have commended his scheme as a “daring” move. It is hoped that the initiative ushers in more comprehensive agrarian reform. However, the manifold discrepancies also raise fears that the project will fail, again.

Jokowi and supporters of land reform should join hands to make it a success.

For such reform to succeed, Jokowi will have to make it a social movement. Farmers and their associations should be involved in the decision-making process because as the receiving end, the farmers know what they need and what to do with the land they would obtain. The President also needs to join forces with pro-agrarian reform civic groups.