Banking business looks ready for a rebound in 2018 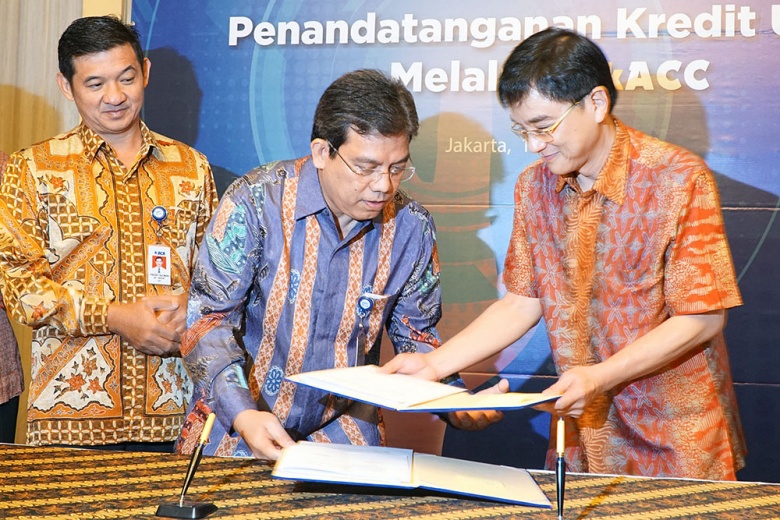 Entering 2018, the pressure on global liquidity is likely to come from the policy normalization process of global central banks. The Federal Reserve (Fed), the central bank of the United States, plans to scale back its US$4.5 trillion balance sheet, starting at the end of 2017 up to 2022, concurrent with further rate hikes.

Meanwhile, the European Central Bank (ECB) will begin to taper its asset purchases in early 2018, with a view to start raising rates possibly by the end of 2019. A parallel but distinct dynamic is also developing in China, where authorities are aiming to curb lending in a bid to facilitate deleveraging.
Given China’s status as a large market for Indonesian exports, especially commodities, and also a major source of investment, this dynamic could prove detrimental in the future, even if the trade and foreign direct investment (FDI) figures have not borne this out so far.

The expected tighter monetary conditions could filter through to the capital market, while a possible stronger US Dollar can also dampen commodity prices in the medium term, thereby depressing Indonesian export revenues.

Fortunately, all these downside risks are likely to be counterbalanced by the global economic recovery. Corporate earnings growth across the globe has continued to improve, which gives validation to the elevated asset valuation. In turn, this would imply a stable global liquidity, with increasing private money offsetting the expected decline in “official” liquidity.

Moreover, central banks in the West, but especially in China, are also likely to take a gradual path, in case asset prices became too volatile. The appointment of Jerome Powell as the next Fed chairman appears to signal less-aggressive tightening ahead, thus providing more room for liquidity growth — at least in the short-term.

Altogether, this means that the moderate influx of capital that we saw in 2017 might extend into 2018, with both exports and capital inflows contributing to a healthy balance-of-payments for Indonesia.
Domestically, the banking sector, indeed, ended 2017 in a less-than-ideal shape. Loan growth continued to slow, squeezed by weak demand and banks’ consolidation of lending capacity due to high non-performing loans (NPL). Deposits or third-party funds grew somewhat faster, but the fact that time deposits were the fastest-growing component indicates savers’ skepticism on the economic outlook.

One factor that might underline the private sector’s weak appetite for credit is the relatively low capacity utilization rates. In particular, the manufacturing industry has yet to escape the shadow of the protracted contraction of 2014-2016. Still, there is a good deal of variability in this respect, and some sectors may start to invest in a new capacity in the medium-term.

Furthermore, the “animal spirits” may be dampened by fears of uncertainty. One kind of uncertainty relates to tax enforcement, with the government’s ongoing intensification driving paralyzing private activities in a “crowding-out” effect of sorts.

The contentious Jakarta Election in early 2017 might also be casting a long shadow of uncertainty ahead of the next round of regional elections in 2018, and ultimately, even leading to the presidential and legislative elections in 2019.

Real borrowing rates could be another factor limiting loan growth. In the last two years, inflation has dropped faster than the nominal interest rates, making real rates relatively high. Bank Indonesia (BI) has been trying to stimulate borrowing by cutting its policy rate twice recently, but the impact of these cuts — as well as the earlier rounds of cuts — on actual borrowing rates may only be seen in early 2018 at the earliest.

One of the reasons for slower than expected monetary transmission could be the high NPL ratio, which forces banks to maintain a higher reserve and higher margins in order to stabilize profits, and at the same time, makes it more risk-averse in making new loans.

However, even with a slow loan growth, Indonesian banks remain healthy and actually still experience better profitability (Chart 1) and better capital adequacy than their peers (Chart 2). Experiences from the 1997-1998 Asian crisis have led to tougher banking supervision, and thus, a healthier industry. This good risk perception has helped maintain the valuation of Indonesian banks, thereby further contributing to their capital adequacy and liquidity.

This situation, plus the high NPL, is squeezing their volumes and net interest margins (NIM), even though profitability has actually improved during the past year. 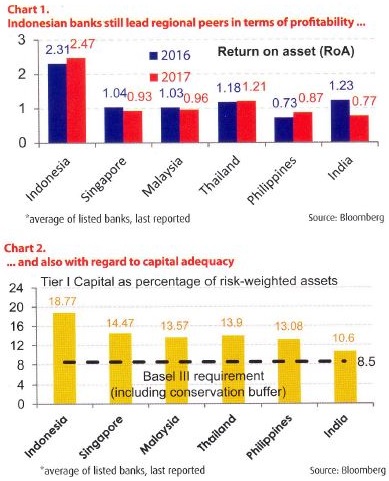 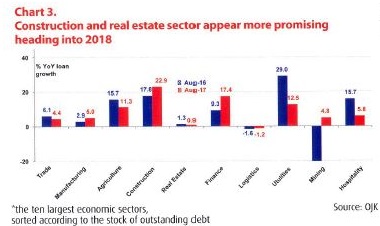 The smallest banks (BUKU 1) have had a much more drastic experience. Their loan disbursement dropped sharply, leading to a precipitous decline in LDR. This, combined with a simultaneous decline in NIM, has greatly hurt their profitability. The emerging competitive landscape, with the increasing migration of financial activities to online platforms, may exacerbate this trend further in the long run.
In contrast, the biggest (BUKU 4) banks continue to book the highest profits, comparatively. Their high loan loss coverage also gives them more flexibility, even as their NIM experience a similar pressure as mid-and smaller-sized banks.

High profits could also reflect greater success in loan restructuring or improving efficiency, which should put them in a decent position to capitalize on future recovery.

Of all loans to non-financial industries, construction was naturally the best-performing sector in 2017, given the government’s infrastructure drive (Chart 3). However, there are reasons to believe that the real estate sector would not be far behind.

For one, although consumer-facing activities (trade, real estate and hospitality) saw slower loan growth compared to 2016, loans to consumers are actually improving across the board. This indicates that consumers’ purchasing power has staying power indeed — despite the recent handwringing — and hints that households have generally kept better balance sheets compared to the business sector, amid the recent commodity slump.

The NPL ratio is stabilizing, as mentioned before, but most notably, the numerator (non-performing loans) is now growing much slower. Of course, the NPL ratio is a lagging indicator, so the mild improvement this year (compared to the previous three years) should translate to lower NPL in the next, giving banks more room to lend.

A few subsectors within the property industry may continue to struggle, nonetheless. The small office and home office (SOHO) segment still posts a very high NPL ratio, following the end of the speculative boom in previous years.

The continuing shift to online marketplaces is likely to further depress this segment (as well as commercial property), as sellers do not need a physical place to sell their products. The same trend, however, may boost the demand for warehousing space and other logistical facilities in the long run.
Overall, in spite of several downside risks, the global and domestic economic conditions should prove to be more genial for the banking industry in 2018. Domestic liquidity should get a boost from increasing exports and continued growth in investment. As such, we believe that loan disbursement may also pick up as confidence begins to return, corporate earnings begins to pick up and asset quality gradually improves.

So far, there are already signs of improving risk perception, as the NPL ratio has been slowly declining to just under 3 percent. Furthermore, economic indicators have begun to improve following their mid-year slump, and investment prospects should strengthen as Indonesia continues to improve with regard to ease of doing business, ranking 72nd from 106th in the last two years.

Moreover, next year’s state budget is smaller than previous years’, but still maintains its focus on infrastructure and maintaining purchasing power. The narrower fiscal deficit will begin to alleviate the “crowding-out” effect, and give greater room for private sector borrowing, so long as global conditions stay favorable.