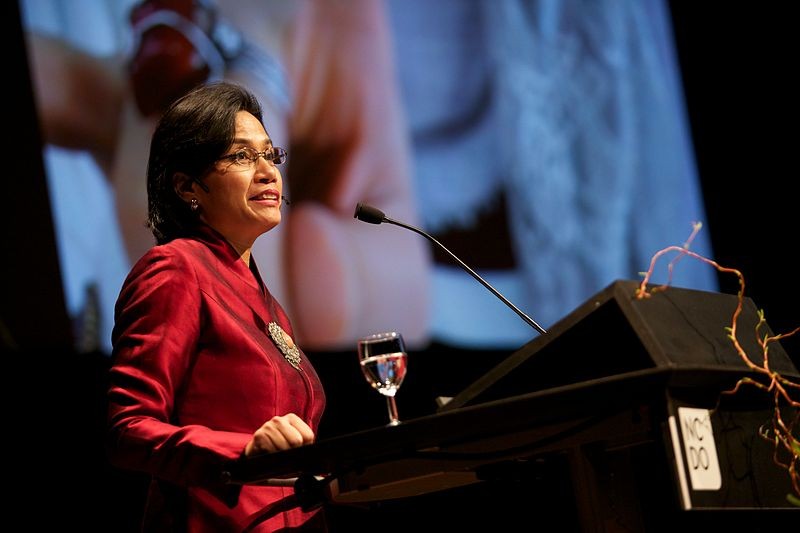 As we transition to a new fiscal year, this republic is presented with a credible 2018 state budget that aims to further strengthen economic resilience and promote inclusive growth. The global economic outlook is showing signs of an upswing.

Indonesia’s economy stands to further benefit from increased trade and improved commodity prices. Growth in global trade volume is expected to almost double compared with 2016. The International Monetary Fund (IMF) projects that global growth will accelerate to 3.6 percent in 2017, and to 3.7 percent in 2018.

The coast is not fully clear yet. Downside risks remain with China’s economic rebalancing, security and geopolitical volatility and threats of protectionism. The world also awaits to see how the United States, Eurozone, Japan and China will steer their monetary policies.

And the socio-economic impact of climate change, natural disasters and technological automation should not be underestimated in the long run.

In 2017, thanks to the government’s sound and prudent economic policy, Indonesia has consistently been posting healthy gross domestic product (GDP) growth of above 5 percent — better than most emerging economies. The budget deficit was kept to 2.67 percent of GDP — well below the constituted limit. Furthermore, Indonesia’s broader macroeconomic indicators are sound.

The country is experiencing solid growth in new jobs and real wages, and low and stable inflation of around 3.5 percent. Moreover, food prices are steady, consumer confidence is strong, interest rates are low and the exchange rate has remained consistent. Domestic and foreign direct investment have been picking up thanks to increased infrastructure spending. Partly attributed to the increased commodity prices, exports are becoming an increasingly reliable third engine of growth for the country.

Under the able leadership of President Joko “Jokowi” Widodo, the government will continue the reform efforts and ensure synergies in fiscal, monetary and real sector policies. This is aimed at promoting inclusive and sustainable growth to address Indonesia’s pressing development challenges. In addition, significant investments in our human capital and infrastructure are building the foundation of a more competitive economy in the future.

Around 25 percent of the 2018 national budget is allocated for education, health and social protection. Our young population is the fuel that will drive Indonesia’s future economic prospects. This can only be successful if supported by improved quality of health care, nutrition, education and vocational training. They will need to be ready for the jobs of tomorrow and the global competition that comes with it.

The flagship Indonesia Smart Card program ensures over 20 million children from the poorest and most vulnerable households remain in school.

Almost 30,000 classrooms are being constructed or rehabilitated. Over 320,000 students are being awarded the Bidik Misi scholarship to attend tertiary education. The Indonesia Health Card program provides over 92 million people with access to healthcare. Around 6 million households are benefiting from the Keluarga Harapan social protection program, which will be scaled-up to 10 million households.

Infrastructure building has been accelerated to make Indonesia’s economy more competitive. In the 2018 budget, over Rp 410 trillion (US$30.2 billion) will be allocated to continue these investments. Ports, housing, roads, railroads, airports and power plants are being constructed. Engineers and construction workers have never been busier.

In addition, the Village Fund has been supporting the development of basic infrastructure at the grassroots level.

This effort is aimed at improving connectivity among the islands and reducing logistics costs. The prices of basic goods in the outlying islands are becoming more affordable as a result. This will translate into improved efficiencies, thriving regional economies and lowering the development disparity among the regions.

At the end of the day, the government wants to ensure that development is felt irrespective of where we live, from Sabang in Aceh to Merauke in Papua.

In the three years since this government took office, signs of progress have been visible. The economic pie has grown and is more equitable. The poverty level has declined to 10.7 percent and the Gini ratio has improved to 0.39 from 0.41 last year.

We hope to reduce this further to 0.38 in the year ahead. The prevalence of stunting for children under 2 years old has gone down to below 28 percent. The unemployment rate has also decreased. Major infrastructure projects are being completed one by one.

The government is working hard to strengthen Indonesia’s institutions. We have introduced a comprehensive tax-reform plan to make collection more effective, and to broaden the tax base. And we are taking steps to ensure financial inclusion, and to improve trade and investment policies, all of which will further fuel competitiveness. In addition, political stability and security is also well-maintained as the world’s third-largest democracy gears up for the upcoming electoral process. 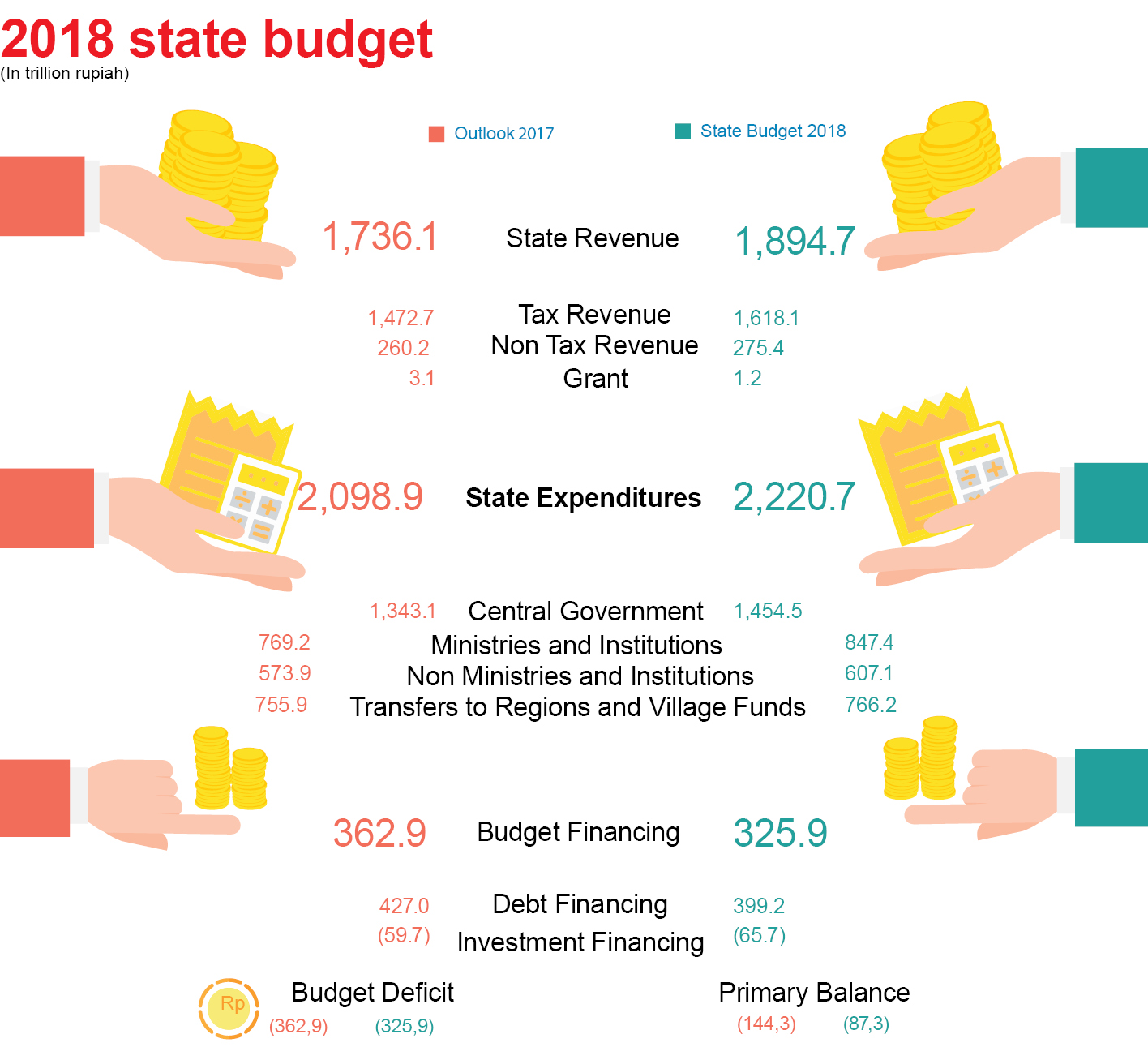 The various reform efforts initiated by the President are getting international recognition. Indonesia’s position in the World Bank’s ease of doing business report has jumped 34 points since this government took office and currently ranks 72 globally — better than most BRICS countries (Brazil, India, China and South Africa). All major rating agencies have accorded Indonesia investment grade.

Our standing in the Global Competitiveness Index has also improved. And according to the OECD-Gallup world poll, 80 percent of Indonesians have confidence in the national government — the highest among all countries surveyed.

In 2045, Indonesia’s population is expected to surpass 300 million people of which 52 percent will be of productive age. More than three fourths will live in urban centers and 80 percent will be thriving middle-class. By then, the income per capita will be more than $29,000.

The Indonesia of tomorrow will be formidable: its economy will thrive and its people will prosper.

To reach this stage will depend on the socio-economic policies we institute today. The political will is there, the President is committed to continued reform. This government is building the foundations for a thriving Indonesia of the future. The 2018 National Budget aims to further boost confidence that we are heading toward that direction.