Thomas Paterson
The writer is a Master’s candidate at the Australian National University’s Strategic and Defense Studies Center. He was a part-time research intern in the Australian Strategic Policy Institute (ASPI) in 2018 and conducted research on Indonesian cyberspace 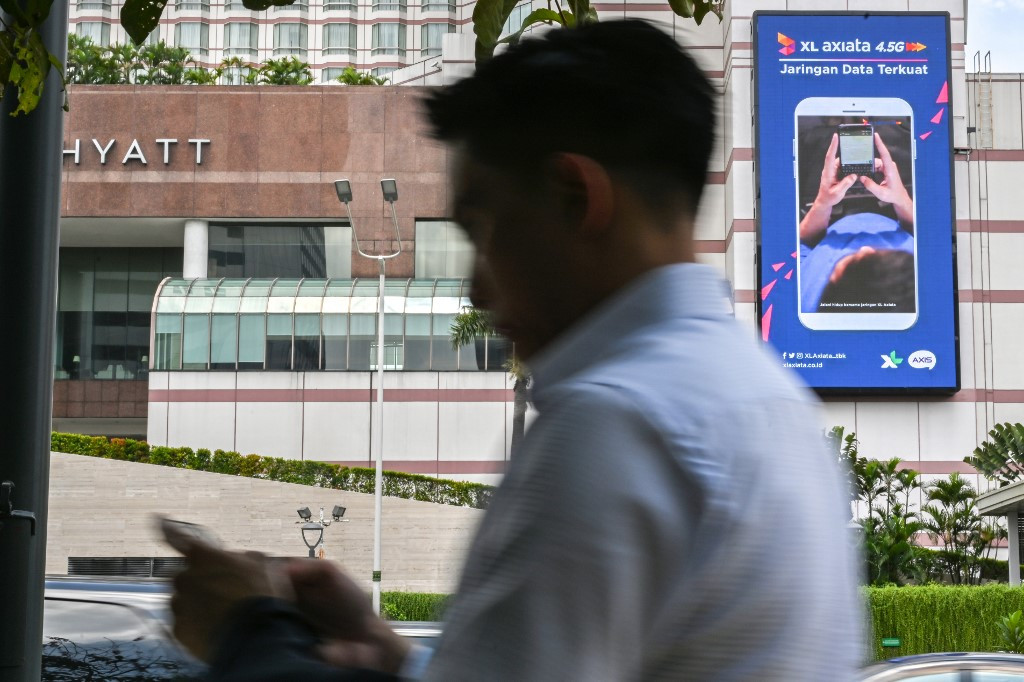 A pedestrian uses his smartphone while walking on a sidewalk in Jakarta on February 28, 2019, past an advertisement for one of Indonesia's top three mobile operators, XL Axiata. (AFP/Bay Ismoyo)

Thomas Paterson
The writer is a Master’s candidate at the Australian National University’s Strategic and Defense Studies Center. He was a part-time research intern in the Australian Strategic Policy Institute (ASPI) in 2018 and conducted research on Indonesian cyberspace

Now that President Joko “Jokowi” Widodo has secured another five years in the top job, it is likely he will continue to focus significant attention on infrastructure development. It is hoped that this will include more focus on digital infrastructure, so as to bolster e-commerce opportunities as a way to stimulate economic growth. E-commerce is seen as a good way that Indonesia could reach its 2025 target of seven percent annual gross domestic production (GDP)  growth. This target is not necessarily a pipe dream as some estimates predict Indonesia could account for 46 percent of Southeast Asia’s e-commerce in value by the middle of next decade.

Both Go-Jek and Singaporean rival Grab are in a race to become the biggest consumer technology groups in Southeast Asia by expanding first in Indonesia. Further large e-commerce investments by Chinese companies include Alibaba’s  US$1.1 billion investment in Indonesia's largest online marketplace Tokopedia, and a $2 billion acquisition of regional e-commerce leader Lazada Group. These landmark investments clearly indicate Indonesia’s growing importance as an emerging e-commerce market.

The growth has been enabled by rapidly increasing rates of internet connectivity in Indonesia –the proliferation of smartphones being particularly useful for Go-Jek and Grab. Access to relatively cheap data plans in the urban population centers, has also resulted in an explosion in the use of social media. The voracious appetite for this service meant that in 2014 Indonesian’s were the worlds most addicted smartphone users -- based on a daily average of 181 minutes of screen time. Even though average screen time has increased to 206 minutes a day, Indonesia has now retreated to having only the fourth highest rate of social media use in the world.

Not all Indonesians have equal opportunity in accessing the Internet. In urban areas 72 percent of people have access compared with just 48 percent of those in rural areas. An incoming Jokowi government will need to focus on further development of digital infrastructure to help lift rural connectivity rates. Indonesia lags behind its neighbors on this front, only investing 1.3 percent of its GDP compared to Thailand’s 2.4 percent, Malaysia’s 4.5 percent and Singapore’s 6.6 percent.

Low level of digital literacy also means under-utilization of good digital opportunities including platforms like Amartha, which helps rural women living in more remote locations to access the banking system. Applications and programs like this are vital because only 48 percent of Indonesian women are connected compared with 51 percent of men. The positive correlation between women participation in the economy and growth reinforces the need for further digital literacy, so that these opportunities can increase uptake.

Another good digital opportunity is a public reporting tool called LAPOR! This platform facilitates communication between the government and civil society, which helps promote accountability and transparency. Low digital literacy and knowhow preclude Indonesians from utilizing these platforms. This is unfortunate as digital innovations like these enable increased efficiency for individuals and public trust in government – a significant opportunity in a country still held back by corruption.

Catering to the needs of Indonesia’s young population will also be a major challenge. Twenty-four percent of Indonesia’s population are millennials of which 88 percent want to start their own businesses.  Indonesia’s government needs to develop the digital infrastructure and create opportunities for them also - not only to stimulate economic growth but also to satisfy them politically. A disenfranchised youth could be a destructive and destabilizing force if not satisfied – the potential of which was on show during the recent post-election riots.

To enable all this to occur, Indonesia desperately needs a national digital roadmap. This should be a central focus of a second-term Jokowi government, especially if Indonesia is going to fully realize the e-commerce opportunities that the digital economy could bring, and thus achieve the 7 percent annual GDP growth target.