Challenges for Indonesia in the Asia-Pacific region

Within the next 30 years, China will become a powerful country governed under socialism a la China in a new global environment

Jusuf Wanandi
The vice chair, Board of Trustees, CSIS Foundation 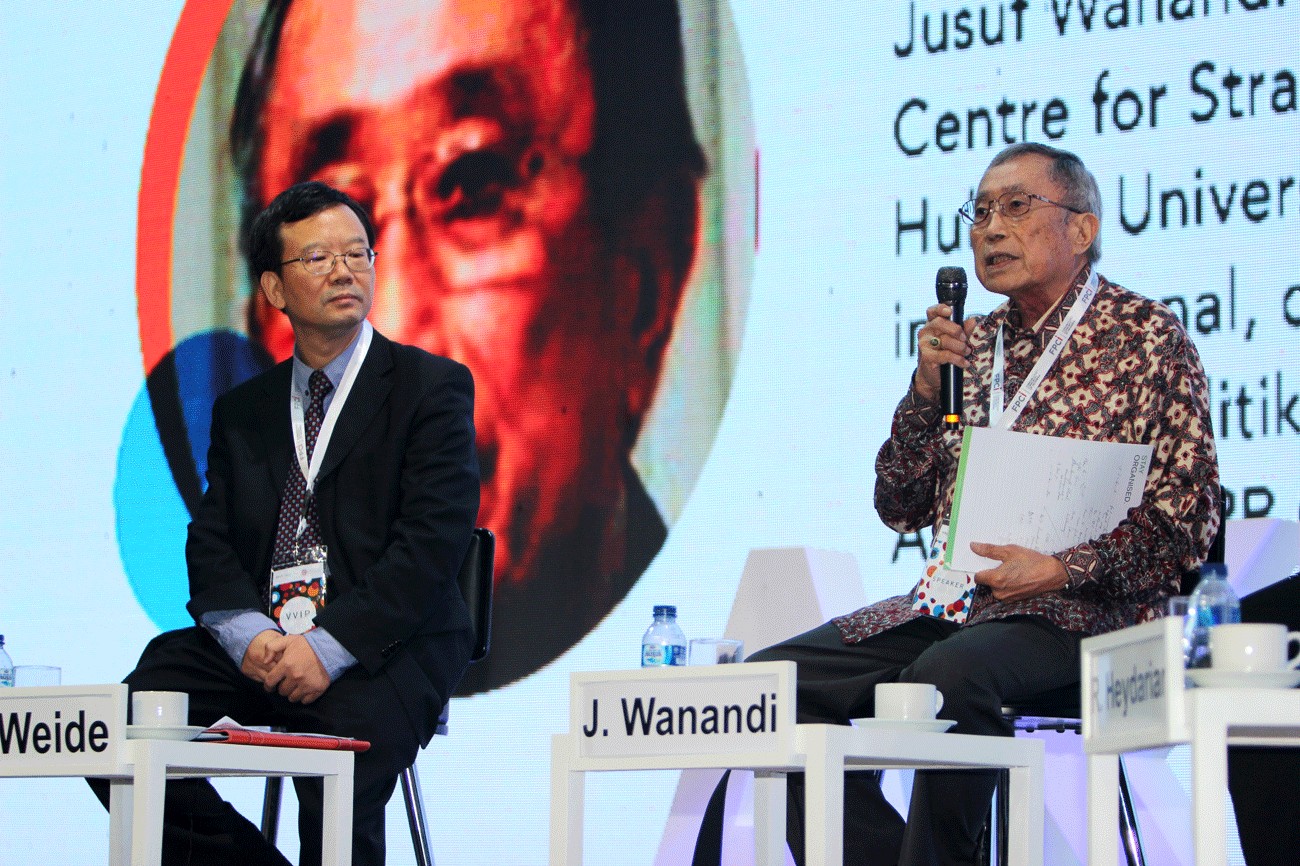 Within the next 30 years, China will become a powerful country governed under socialism a la China in a new global environment

Jusuf Wanandi
The vice chair, Board of Trustees, CSIS Foundation

Since the end of the Cold War in 1991, East Asia has gone through dramatic changes. First, it lived through a short era of one superpower reigning supreme, the United States. The demise of America’s chief nemesis, the Soviet Union, had paved the way for a unipolar world.

It did not last long.

The 2008 global financial crisis weakened the US economy so badly at a time when other powers, particularly China, were rising. That marked the beginning of a multipolar world.

The US failed to take advantage of its position to construct a world order that is based on liberal democracy and economic capitalism. Having won the superpower contest, she was too jubilant, but did little to create a system that could have sustained her position. There was just too much hubris.

China in the meantime was catching up fast. The changes in the last four decades have transformed the country, not only in the economic field — although here, it was nothing short of a miracle — but also in political, social and culture spheres.

This trend is continuing under President Xi Jinping, who in October was reelected the leader of the Chinese Communist Party. He is now seen as claiming his historical place alongside the founder of Communist China Mao Zedong and Deng Xiaoping, the father of China’s economic development.

It is no wonder that Xi’s thoughts have been incorporated into the constitution. If Mao is the founder and unifier of China and Deng is the father of China’s economic development, Xi is the “dream catcher” of China, someone who is transforming China into a powerful and prosperous nation with distinct Chinese characteristics that are consistent with Chinese traditional values, including Confucianism.

China is set to become a nation with a moderate per capita income level by 2020. By 2035, it should reach the level of a modern socialist country, with adequate strengths in all fields. By 2049, the centenary of communist People’s Republic of China, it should become a complete modern socialist state with global strengths.

China is also becoming more active in foreign policy, most particularly through regional organizations like the Belt and Road Initiatives (BRI), BRICS (Brazil, Russia, India, China and South Africa), Conference on Interaction and Confidence-Building in Asia (CICA), as well as through its cooperation with ASEAN.

Within the next 30 years, China will become a powerful country governed under socialism a la China in a new global environment. The strategic vision is to build socialism with Chinese characteristics, a nation that is moderate and prosperous in all fields, and one that is actively pursuing modernization. China will become a large modern socialist state, in all its dimensions.

Another noteworthy development is the kind of role that President Trump seeks for America, since there is the possibility of him continuing to lead the US for some years to come. Trump is creating a new challenge for East Asia with his policy of putting solely America’s interests ahead of everything else, and by effectively withdrawing his country from global leadership.

During his extensive trip to East Asia in November, which included China, Japan, South Korea, Vietnam and the Philippines, Trump showed that he was willing to follow on the advice of his aides to attend summits in Vietnam and in the Philippines, but there is no guarantee that he will not return to his early stance as the US leader who is only concerned with himself and his people (particularly his political supporters).

For East Asian economy and development, it is vital and critical that we see positive growth and stability that is based on shared economic prosperity. The US remains a powerful force, particularly in military terms, and still plays a major role in the region. There are clear and valid arguments why the US must maintain its presence in the region and take part in maintaining the strategic balance of power.

Still, in the end, East Asia must be able to protect itself and countries should join hands to fill in the vacuum if the US withdraws from international trade, climate change or in common security arrangements in East Asia. Uncertainties have become the new normal, at least for now.

This is why it is important for us to forge ahead with the Regional Comprehensive Economic Partnership (RCEP). It is also important that we support the efforts of Indonesian Foreign Minister Retno Marsudi in helping to resolve the conflict in Myanmar’s Rakhine state, for humanitarian reasons, for regional stability and for ASEAN’s own credibility.

ASEAN must be strengthened and its unity and activity enhanced. At this uncertain time, ASEAN must help preserve the “strategic equilibrium” in East Asia.

Americans are struggling to come to terms with China’s rising power, let alone the notion of it becoming an equal. The US always sees itself as the dominant global power, the “city upon the hill.” They are going to have even more difficulties in accepting China as the number one power, if and when it surpasses the US. That will not happen anytime soon, although in economic terms it might be sooner than they think, maybe as early as 2030.

In terms of military power, the US may remain unchallenged for the foreseeable future. But if Trump is to remain president until 2024, and he pursues his unilateralist policies, the thought of China leading the world in 2049 is not too far-fetched. China no doubt is entertaining this idea.

On foreign policy, China appears willing to take some leadership although she would need a lot more acumen. Alternatively, she could work in partnerships with other countries at different levels; with other great powers, with neighbors and more actively supporting developing countries.

In the meantime, we should be prepared to fill in the vacuum created if Trump pushes ahead with his unilateralist policies.

In economic terms, he seems much more consistent with his earlier belief. No more is this blatantly shown in his approach to international trade, giving preference to bilateral over multilateralism, abandoning the Trans Pacific Partnership (TPP), dismantling the North American Free Trade Agreement (NAFTA), and even undermining the World Trade Organization by withholding new appointments to represent the US in the body’s conflict resolutions committee.

Multilateralism remains important, and that’s why the BRI, existing trade arrangements between Japan and the European Union, and the RCEP in East Asia are important institutions to plug the holes that Trump’s trade policies are creating.

President Trump is clearly withdrawing the US from its global commitment and responsibility; he took America out of the TPP, he jettisoned the Paris Agreement climate deal and quit UNESCO because of a perceived anti-Israel bias.

Most dangerously, Trump is rejecting the 2015 Iran nuclear agreement already endorsed by other world powers.

Most recently, Trump announced his decision to move the US Embassy in Israel from Tel Aviv to Jerusalem, effectively giving legitimacy to the Jewish state’s claim that Jerusalem is its capital. Not surprisingly, the move that contravened United Nations resolutions was widely criticized as undermining the peace process.

ASEAN has to prepare itself. Philippine President Duterte as the ASEAN chair in 2017 has made it a priority to complete the East Asian Regional Comprehensive (RCEP) round of negotiations. The RCEP is a coalition of countries including China, India, Japan and the 10 ASEAN member countries.

Achieving this deliverable would send a strong signal amid uncertainty and provide a crucial strategic direction for ASEAN, which marked its 50th anniversary in 2017. The world has changed profoundly since RCEP was first conceived, with lots of uncertainties about trade, rising protectionism, technological disruptions and now, US unilateralism. These factors add urgency to closing the RCEP deal sooner rather than later.

The RCEP offers important benefits to deal with the challenges of the 21st century, but now also has the important purpose of helping curtail protectionism and boost trade policy certainty. The RCEP is the only game in town — and it comprises half of the world’s population and more than one-third of global gross domestic product (GDP) and trade. Asia has a bigger stake than anyone else in combating protectionism and securing the rules of the game.

RCEP has put ASEAN in the box seat on what the whole East Asia region can do to protect Asian interests. Without ASEAN’s initiatives, Asia collectively cannot step forward to defend its interests.

While a TPP sans the US remains on the table, it’s effectively a non-starter, while the RCEP is designed specifically to buttress regional trade and lift Asian growth. By some estimates, a sufficiently ambitious RCEP will lift regional incomes by 2-9 percent, with higher benefits from deeper commitments. The same simulation highlights the damage from increasing protectionism, with ASEAN countries standing to lose by as much as 9 percent of their GDP.

The RCEP’s benefits are not confined to market access; it will build confidence in ASEAN as a center of global value chains and global investment. It can help job creation and innovation as well. Most importantly, it stimulates a cooperation agenda, building capacity for economic reform and reinforcing regional development over time.

A strong ASEAN consensus within RCEP and East Asia will enhance ASEAN’s strategic and bargaining position with its larger East Asian neighbors, the EU and the US.

Southeast Asia’s economic ministers have agreed on “key elements” to accelerate talks on the mega-free trade deal at their Manila meeting in September. The ministers agreed that nations that join this mammoth deal should remove tariff barriers on at least 92 percent of their product lines over five to 10 years.

It is also for this reason that relations between China and Japan must always be kept stable. There will come a time when countries in the region have to keep and preserve stability by themselves, without the US. To achieve this, Sino-Japan ties are critical. The East Asia Summit and the ASEAN+3 (China, Japan and South Korea) must all be intensified.

ASEAN’s role is vital and must be thoroughly prepared. We saw some signs of this coming into realization at the November ASEAN Summit in Manila, something that will be continued by Singapore as ASEAN chair in 2018. One special task for ASEAN and one that can help unite ASEAN again, is in supporting Myanmar in solving the crisis in the Rakhine state.

Myanmar has been vilified by the international community, including the UN and the US. They are especially disappointed that Nobel Peace laureate and democratically elected leader Aung San Suu Kyi has not exercised her power and influence to solve the massive humanitarian crisis and the political and security problems. She did concur, but her authority is limited due to the political position and authority of the Myanmar military.

ASEAN in the past had defended and supported her efforts to open up Myanmar. It is now time for ASEAN to show its solidarity to the Myanmar people by offering assistance and support to the military and Suu Kyi.

ASEAN should first give humanitarian aid to support the hundreds of thousands of people displaced by the conflict, many now lingering in make-shift shelters in Myanmar’s neighboring countries. At the same time, ASEAN should assist and support the Myanmar government to find a political solution to this problem. The situation is urgent, ASEAN’s solidarity and assistance must be given immediately.