Dutch disease and the end of export-led Industrialization strategy 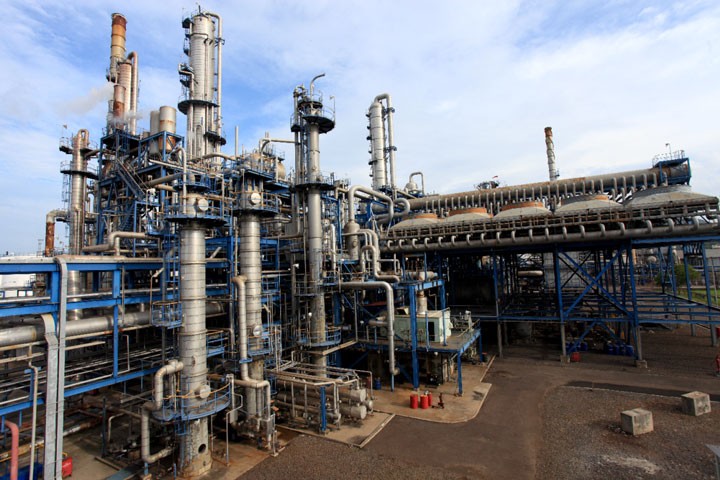 A styrene monomer plant owned by Chandra Asri, which consist of two trains using both mobil-badger technology and lummus technology. (Courtesy of https://www.chandra-asri.com//File)

Industrialization is central to the economic history of modern Indonesia. It began in 1950, immediately after Indonesia gained effective sovereignty over its territory from the Dutch. Nevertheless, the effort to industrialize the economy at that time failed, owing to deep political division and recurring armed conflict that exhausted the nascent Indonesian government.

The opportunity to industrialize the economy came during the New Order period. At first, the New Order government pursued import-substitution industrialization, financed by money from the 1970s oil bonanza. However, this strategy was short lived because trade protectionism in the 1970s resulted in the misallocation of resources toward the development of the capital-intensive rather than labor-intensive industry.

After the second oil boom in the early 1980s, the government changed its policy course to export-oriented industrialization that centered on labor-intensive textiles, garments, as well as the footwear industry and resource-intensive plywood industry

Since the 1998 financial crisis, Indonesia's manufacturing sector has performed poorly. In 2001-2017 it grew by an average of 4.6 percent per year, lower than average GDP growth rate at 5.3 percent annually, a total opposite to the performance in the three decades under Soeharto.

As a consequence, the share of manufacturing contribution to total GDP dropped 4.8 percent to 21.2 percent in 2017. Many economists interpreted this phenomenon as de-industrialization, creating a hypothesis that Indonesia's manufacturing sector lacked competitiveness to compete in the global market.

Although their explanation seems convincing, data and facts on the ground show that this is not the case. Rather, Indonesia's weakening manufacturing sector was caused by the global commodity prices boom that began around 2005 and ended in 2011.

During this period, Indonesia suffered from "Dutch disease", in which the development of the extractive industry, particularly coal and palm oil, predated export-oriented industries through exchange rate appreciation to the level of Rp 8,000 per US dollar.

The effect of Dutch disease was not only evidenced in the declining share of manufactured exports by 8 percentage points to 34 percent in 2011 but also observable in low output growth in textiles, garments and footwear industry as well as resource-intensive plywood industry.

Although Indonesia's middle-income segment is incomparable to those in developed economies, such as Europe, Japan, the United States or Australia, it is well off and consumptive by Indonesian standards.

Most of Indonesia's middle-income works in urban areas like Jakarta, but its members prefer to live in the suburbs like Tangerang, Bekasi, Depok and Serpong due to the cities' low cost of living. Because of the great distance between their workplace and home, they need affordable cars for a one- to two-hour commute -- on a bad day, it takes three to four hours.

The middle-income segment's demand for vehicles was the source of auto industry rapid growth in this
period. As shown by figure 1 below, domestic auto production is driven by domestic sales, which increased from approximately 300,000 cars in 2001 to 1.08 million cars in 2017. At its peak in 2013, the industry sold 1.23 million automobiles, the highest number in the history of the Indonesian auto industry. 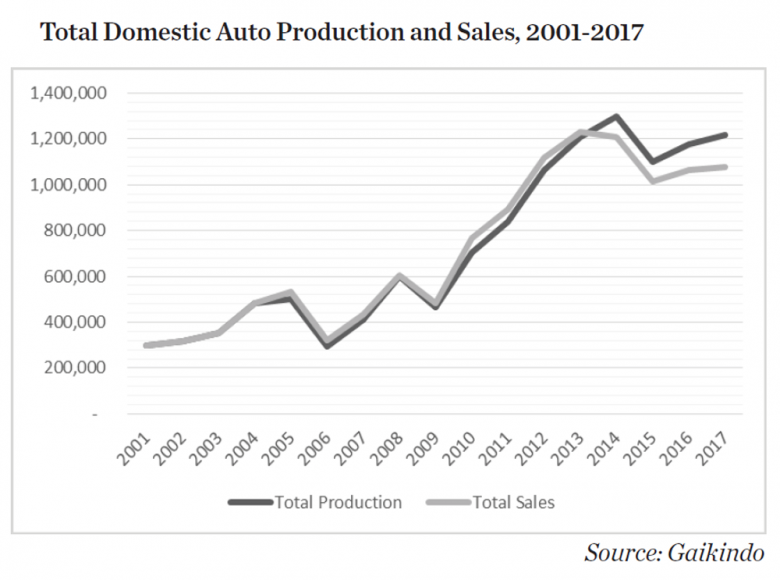 Besides demand for vehicles, the middle-income segment has an appetite for small luxuries by enjoying innovative food and beverage products from local as well as foreign brands. According to data from the Central Statistics Agency (BPS), the middle-income segment spends approximately 15 percent of its monthly per capita expenditure on food and beverage products, such as coffee,
ice cream, chocolate as well as healthy drinks and snacks.

Indonesia's industrialization in the New Order period was initiated through the government's central planning.

After the 1998 financial crisis, the government had neither the financial capacity nor the bureaucratic chain of command to execute such a plan. Rather, industrialization in the last two decades happened by accident.

The Dutch disease extinguished the foundation of the previous export-led industrialization strategy, and
formulated industrial development on its own through the creation of a consumptive middle-income
segment.

Yet, the country still needs export-oriented industry not only to engineer rapid catch-up growth but also to acquire the necessary foreign currency to finance the machinery and equipment imports that the domestic industry still struggles to mass produce.

Therefore, it is crucial to find a delicate balance between these two forces in the future.

Perhaps the government needs to consider moving export-oriented industry to places other than Jakarta and West Java, where cost of living is significantly lower but the infrastructure is capable to support industrial development.