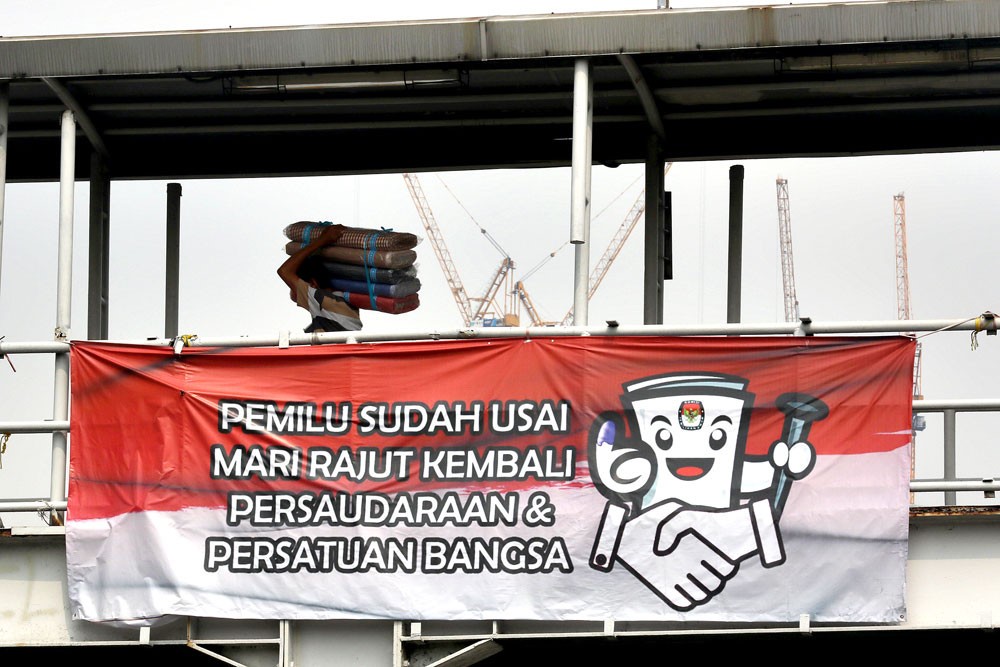 A sign on a footbridge, which reads “The elections are over, let’s bring back our brotherhood and nation’s unity”, is seen in Tanah Abang, Central Jakarta. (The Jakarta Post/Dhoni Setiawan)

Indonesian President Joko “Jokowi” Widodo is on course for a second term in office; quick counts of the April 17 ballots suggest that he won around 55 percent of the votes, while his long-time rival, former military strongman Prabowo Subianto, garnered some 44 percent.

This result is more or less similar to the 2014 presidential elections when Jokowi secured 53.15 percent of the valid votes, according to the General Elections Commission (KPU).

One question that arose from the recent elections is: What are the future challenges faced by the president-elect in dealing with the ubiquitous rise of identity politics that promotes the “holier than thou” narrative among disgruntled members of the Prabowo camp, as well as of those with differing concepts of national interests?

Identity politics here refers to political positions that are based on the interests and perspectives of ethnic, social or cultural groups; in the context of today’s Indonesian electoral politics, it refers to specific practices and traditions of Islam with which people identify.

If identity politics is not wellmanaged, it may lead to a frustrated and fractious society that would, in the long run, hinder the country from overcoming its deeprooted and acute internal and external problems, including abject poverty, inequality, radicalism and environmental degradation.

That said, identity politics is not new in Indonesia. It has been part and parcel of political contests in the country since independence. However, and more significantly, it is not uniquely Indonesian.

Think of the rise of Donald Trump in the United States or Brexit in the United Kingdom. Perhaps, Indonesian (and maybe Asian) politicians learned from the West that identity politics that promotes fear of “the other” and hateful sentiments, exacerbated by the rise of social media and online falsehoods, have successfully put its advocates into power.

Those against Jokowi argue that the frontrunner has a tunnel vision of economic development, especially on infrastructure.

In addition, they allege that to remain in power, he made compromises with corrupt politicians and flirted with intolerant religious leaders, claiming that these political moves have endangered the rights of minorities, as well as jeopardized human rights.

The mixing of religion and politics is among the challenges the president-elect must overcome.

This issue is far from simple. Ironically, Jokowi himself often conducts his state affairs with elements of identity politics.

This included his recent visit to Saudi Arabia during the three day “cooling-off period” before more than 192 million voters cast their ballots.

In addition to securing a string of business deals for Indonesia, and an increased quota of 10,000 more Indonesians for the annual haj, Jokowi received extraordinary treatment — getting access to the most sacred structure on Earth for Muslims — the Ka’aba.

It is hard for outsiders not to interpret Jokowi’s decision to go on umrah (minor haj) immediately before the balloting as part of Jokowi’s flirtation with identity politics. Did he succumb to the pressures and power of identity politics?

The official results of the elections are to be announced within days. Should Jokowi emerge victorious, he will need to consolidate his legacy as the “people’s President”, one who truly promotes respect and unity and practices inclusivity regardless of class or creed.

He must exercise his presidential mandate and send the clear message to weed out ethnic division and faith discord, for the simple sake of harmony, humanity and civic sustainability. To achieve this, he needs to summon and secure the “holier than thou” genie back into the bottle.

Incidentally, given that Indonesia is home to the largest Muslim population in the world and if Jokowi can successfully insulate and inundate majority exclusivism from politics while enlivening constructive and cohesive diversity, the “people’s President” legacy could possibly make him legendary.