Enormous possibilities of an improbable country 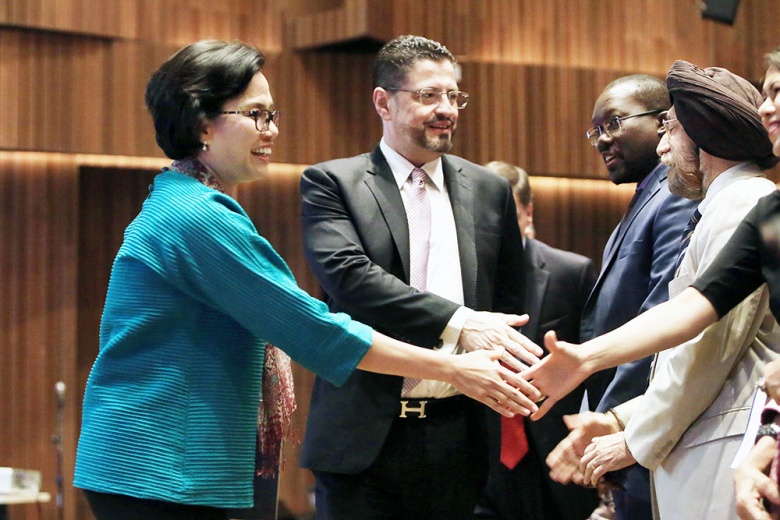 President Joko “Jokowi” Widodo recently passed the mid-point of his current term. This may be an opportune occasion to assess what has been achieved and the challenges and opportunities on the road to creating a predominantly middle-income class and prosperous society, to an Indonesia that has claimed its rightful place among the most prosperous countries in the world.

To start, the administration deserves praise for managing the economy well during a period of unfavorable global conditions. Keep in mind that Jokowi assumed office after the unprecedented global economic boom that took place between 2000 and 2013. In this period, the extraordinarily high prices of oil, gas, coal, and palm oil provided enormous natural resource rents to Indonesia.

The tail winds from commodity prices had already changed to head winds when Jokowi assumed office in October 2014. By 2015, natural resource rents had declined to nearly a quarter of what they had been in the boom years. By February 2016, global oil prices had plummeted by nearly two-thirds.
The price of Indonesia’s exports declined more than the price of its imports — causing a substantial and disadvantageous shock in the terms of trade. Throughout the administration, the global economy has experienced some turbulence following the United States’ Fed “temper tantrum,” Brexit, the rise of economic nationalism in some developed countries, and other geopolitical events.

The government has navigated these head winds successfully. In the last three years, the economic growth has averaged 5.0 percent — a rate that is the envy of most countries. Poverty declined from 12.5 to 10.9 percent of the population and the Gini coefficient declined from 40.6 to 39.3. The three-major sovereign debt rating agencies have given investment grade ratings to the government’s debt in recognition to substantial improvements in fiscal management.

These results are remarkable. They were brought about by several bold public policies, of which I would like to highlight two examples.

Second, the government has worked hard to improve the business environment, including issuing 16 policy packages aimed at accelerating investments. In 2014, Indonesia’s Ease of Doing Business ranking was 120. The country moved up to number 72 among the 190 nations of the world. There is no question that important reforms to improve the investment climate are still pending. Nonetheless, the progress in the World Bank’s Doing Business rankings reflects concrete actions by the government. Jokowi’s administration deserves credit for steering the country well within the challenging environment of the last three years. Yet, the ambitions of this great nation and its people are justly much greater. The Indonesian people want and deserve a much larger middle-class, well beyond the 20 percent of Indonesians who have made it there. The 7 percent growth rates that Jokowi envisioned are possible.

While these aspirations must be pursued and could be attained, many obstacles and risks lay ahead.
Possibly the largest challenges reside in the immense deficits in infrastructure and human capital. In the boom years between 2000 and 2013 Indonesia devoted only 3.6 percent of GDP in public investments and Public Private Partnerships in infrastructure per year, on average. Compare this to 17.7 percent in China, 11.3 percent in Malaysia, and 6.3 percent in Thailand.

We at the World Bank estimate that Indonesia suffers from an infrastructure deficit equivalent to US$1.5 trillion as a consequence of a long period of low investments, especially during the boom years.
Importantly, human capital is the pathway into the middle-income bracket. The middle-class jobs of the future, which require interacting with fast-changing technologies, need healthy workers with much better-quality education.

The human capital deficit is striking as, for instance, 37 percent of children under 5 years old in the 16th largest economy in the world are stunted due to chronic malnutrition — sadly, their futures may be already irreparably damaged. Although the government has allocated 5.7 percent of the central government’s budget for health, more work remains to be done. This situation has already reduced competitiveness as these children enter the future workforce with diminished cognitive ability. Stunting is a national emergency, which needs to be addressed immediately with massive government force.
Indonesia must also focus on the quality of its education system. With an allocation of 20 percent of the budget, the country should get better results. Vietnam, which allocates the same share of its budget to education is now among the top 10 achievers in the international PISA test — meanwhile, Indonesia still lies towards the bottom of the rankings.

Another important challenge comes from the end of the demographic dividend expected by 2030, when the share of working age people among the population will reach its maximum level before starting to decline. No country has ever become rich after it became old. The window of opportunity to become prosperous will start closing soon.

The government needs to continue working on structural reforms to attract more foreign direct investments (FDI). Among high and middle-income countries, Indonesia is the fifth most restrictive country for foreign investors. The country’s FDI to GDP ratio is around 2.5 percent; below its regional peers including Vietnam and Malaysia, with a ratio of 5 and 3.5 percent respectively. Indonesia can increase its share of FDI by removing constraints to investment, including foreign equity limits, reservations for small and medium enterprises, and local content requirements.

Finally, strong interest groups in business and parts of the bureaucracy will fight reforms to remove the ample and inefficient rents created through government policy and at the cost of the people. For example, restrictive trade policies in agricultural goods, including import monopolies and high tariffs, make food prices higher in Indonesia than its neighbors. For example, rice prices in Indonesia are 70 percent higher than its continental ASEAN peers. The large cost to consumers brings little benefit to farmers, whose productivity remains low, but entail large economic rents to some.

While these challenges are substantial, enormous possibilities exist. Global economic conditions are improving. The outlook for 2018 is favorable and commodity prices have recovered significantly since the President assumed office. Indonesia cannot afford to lose any opportunity.

The policy reform agenda is clear. Efforts by the Finance Ministry to collect more tax revenues beyond 10.4 percent of GDP must continue and should be supported by all Indonesians. Without more revenues, the country will not be able to close the immense gaps in infrastructure and human capital. Clearly, Indonesia cannot take her place among the rich nations while its government collects taxes at the level of the poorest countries in the world.

Related, the emerging middle class and the business community need to accept that paying taxes is an unavoidable element of the social contract in a prosperous nation. The government must, in turn, spend its budget transparently, effectively, and efficiently to deliver on its side of the social contract. In this sense, Jokowi’s administration has made progress by improving expenditure substantially as it has allocated a much larger share of budget resources to closing the infrastructure and human capital gaps. This said, there is a lot of room to improve the efficiency of expenditure from these larger allocations to infrastructure, human capital, and fiscal transfers to decentralized regional governments.

Continued reforms in these sectors will help Indonesia continue to reduce its poverty rate and promote equality among the population. A more prosperous Indonesia will put the country in a more prominent position in the global scene — a position that this great nation deserves by virtue of its territorial, economic and population size — but has not fully achieved yet. And Indonesia needs to be prosperous not only for its own sake, but also for the world community. As the country with the fourth largest population in the world, a prosperous and peaceful Indonesia benefits the entire globe.
Many have called Indonesia an “improbable country,” one that no one could have imagined without seeing it. This improbable country is also a country of immense possibilities: amazing natural resources, great and kind people, and enormous beauty. The World Bank has been serving Indonesia for the past six decades. We were privileged to be Indonesia’s partner when it became a middle-income country in 2003. We hope to see the country achieve its potential of great prosperity rather soon.

We realize that public policy action in the next decade will be determinant to how its future will unravel between the two choices ahead. Will Indonesia grow into a high-income country with little poverty and a large middle-class? Will Indonesia remain trapped into middle-income status as a country where only roughly one fifth of people will be middle class?

This wonderful improbable nation has enormous possibilities — its dreams are possible and within grasp as long as bold action is taken while there is time.