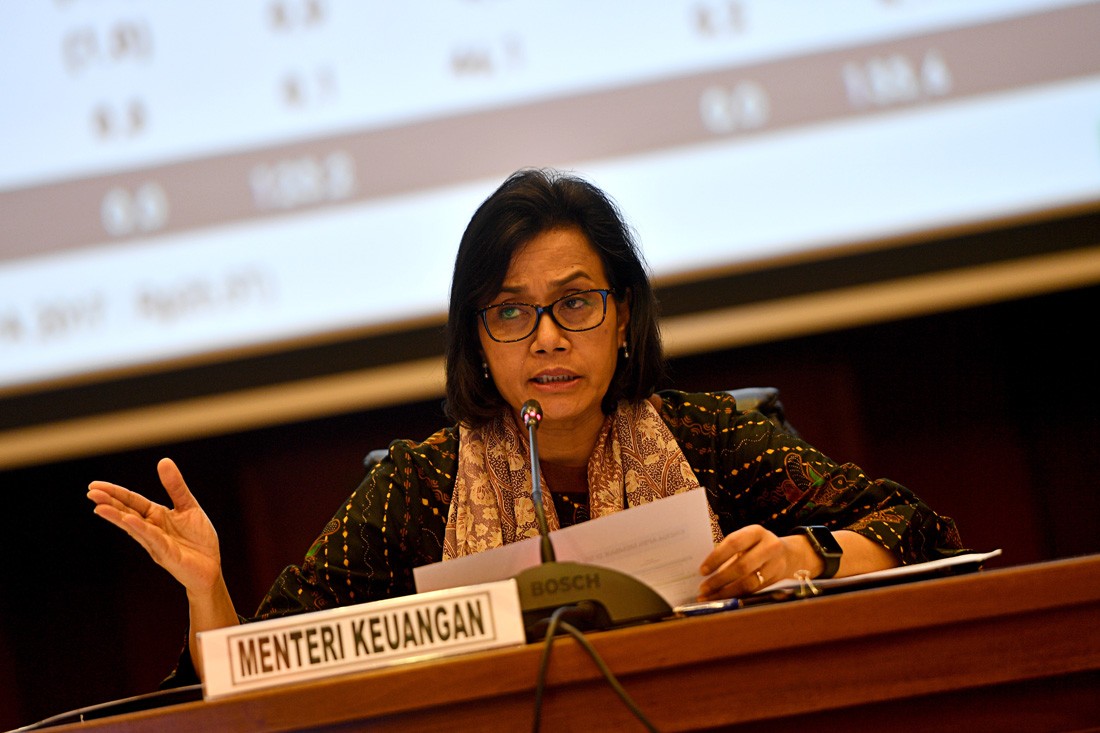 Finance Minister Sri Mulyani Indrawati gives a press statement on the performance of the 2018 State Budget at the Finance Ministry's office in Jakarta on May 17. (Antara/Sigid Kurniawan)

The digital economy has rapidly grown in Indonesia during the past several years, but its contribution to the country is still quite insignificant.

With the advancement of digital technology, foreign companies are able to reach foreign markets without a physical presence. On the other hand, with the existing Tax Law, the government is unable to tax them.

With the fourth largest population in the world, Indonesia is a big market for digital goods and services. According to Temasek’s estimate in 2018, the e-commerce market in Indonesia stood at US$12.2 billion and the digital media market was valued at $2.7 billion.

According to the Finance Ministry’s data, the total sales of foreign intangible goods and services stood at Rp 93 trillion ($6.6 billion) in 2018. Despite the large amount of money involved, the contribution of digital transactions in tax revenue remains insignificant.

Unfortunately, under the current tax principles, the government has no right to tax foreign businesses if they don’t have a phisical presence, or popularly called permanent establishment (PE), within the geographical boundaries of the country of sales.

The Organization for Economic Cooperation and Development (OECD)/Group of 20 Inclusive Framework on Base Erosion and Profit Shifting comprising over 120 countries is still working on resolving the tax challenges of the digital economy. There is still no sign of what will be the consensus-based solution until it publishes the final report in 2020.

Jurisdictions choose to pursue a unilateral approach. Some introduced new taxes other than income taxes that are specifically imposed on digital goods and services from abroad. Famous examples are India with the Equalization Levy in 2016 and France with its Digital Services Tax in 2019.

Other measures include the modification of PE principles in domestic legislation. The “presence” concept is modified to include “economic presence” other than just “physical presence”.

During a meeting in Osaka, Japan, in June, G20 finance ministers underlined the importance of an economic presence rather than a physical presence in deciding the right to tax technology companies.

The recommendation from the Osaka meeting inspired Indonesia. In early September, Indonesia's government began drafting a bill to enable it to get taxes from foreign digital technology companies using the concept of significant economic presence (SEP). With this concept, the income tax is based on sales of goods and services in the country without a PE.

The OECD mentioned that an economic presence can be referred to by several factors: First, revenue, or revenue generated on a sustained basis from a jurisdiction. Second, digital, such as local digital platforms, local domain names or local payment options. Third, user-based factors, such as active users, online contract conclusion and data collected. Those factors can be combined.

By applying the approach, Indonesia has made a big leap in taxing the digital economy and creating a level playing field. Once the criteria of a significant economic presence are met, a foreign business is deemed to exist in Indonesia. Thus, they have the obligations to pay income taxes just like local companies.

They also have to the obligation to obtain a tax identification number, filing and reporting a tax return and paying tax for all their income from Indonesia.

The SEP initiative has been applied extensively around the world, such as Turkey and Israel (both in 2016), Slovakia ( 2017 ) and India ( 2018 ). The European Union also proposed a similar SEP approach in 2018. Although SEP seems to be the long-awaited solution, the government should consider several challenges.

First, against the existing tax treaties. Indonesia currently has 68 tax treaties that regulate PE with a traditional “physical presence” concept. In Indonesia, the tax treaty is lex specialist to income tax law. Even though we have already adopted the SEP concept, we cannot apply it if the company is located in our tax treaty partners.

Amendments to the existing tax treaties are necessary to fully apply the SEP. However, amending the tax treaty requires the agreement of both parties for each treaty, and it perhaps requires considerable rounds of bilateral negotiations. The easier approach to amend all treaties is through a multilateral agreement. But, it is very unlikely, unless global consensus is concluded to adopt the SEP approach.

Second, defining a clear scope and definition. In applying the SEP, the government should give a clear definition of “economic presence”.

The total revenue approach may not sufficient to be evidence that a nonresident is subject to income tax payments. Thus, to define “economic presence”, revenue factors should be combined with other factors. For instance, digital and user-based factors that indicate a purposeful and sustained interaction with the economy of the country concerned.

The government needs to be careful in formulating this definition. A sophisticated definition might lead to precision of the nexus but would lead to compliance burdens for enterprises and resource demands for tax administrations.

On the other hand, too broad a definition leads to uncertainty. The government should be able to address questions such as: Which kind of transactions are covered and put into calculation? What characteristics constitute a “sustained basis”? or what factors will the government use to deem a transactions as “Indonesian transactions?”

Third, enforcement and administrative matters. Compliance costs, both for the business and the government should be kept at a minimum, so the small business will not be burdened. To address this situation, a certain minimum threshold should be set to determine from what point the “economic presence” is “significant”.

From a government perspective, enforcement of the SEP can be challenging. The government should have the capacity to identify and measure remote sales activities of foreign enterprises.

It could be difficult for tax authorities to know when transactions are taking place and at what scale, to identify remote sellers and ultimately ensure their compliance.

Furthermore, the SEP application requires an advanced IT system in collection and enforcement. The Finance Ministry should be ready by providing sophisticated IT infrastructure. Cooperation with other institutions such as the Communications and Information Ministry may be required.

The views expressed are their own.