Indonesia should benefit from US and European growth

Economic growth gives way to a recession because policymakers make a mistake, or because economies overheat and then correct 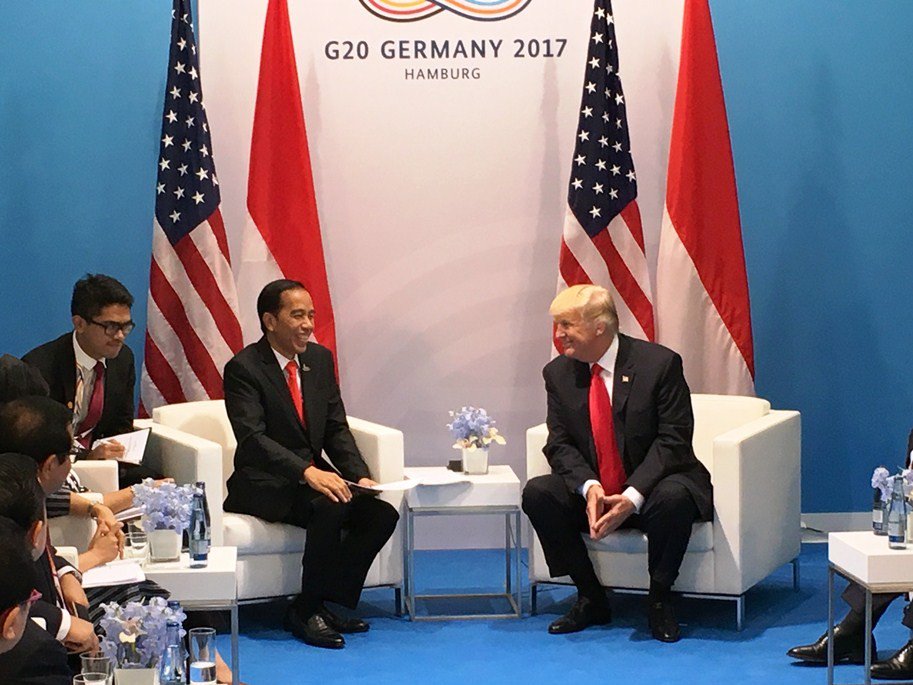 President Joko "Jokowi" Widodo (left) and US President Donald Trump share a chuckle before commencing their maiden bilateral meeting on the sidelines of the G20 summit in Hamburg, Germany on July 8. (JP/Fedina S. Sundaryani)

Economic growth gives way to a recession because policymakers make a mistake, or because economies overheat and then correct

The United States economy has entered the third-longest phase of economic growth in its history. The global economy has gone through a process of recovery after the 2008-2010 crises. About 70 percent of the world’s developed economies had faster growth in 2017 than in 2016. It is perhaps inevitable that when things are going right, people start looking for reasons things will go wrong. “When is the next recession?” is often asked in the financial markets.

Central banks are very far from raising rates too quickly. There is a simultaneous tightening of policy from many of the world’s major central banks, but this is hardly a rapid series of rate increases.
There is also very few signs of the sort of economic overheating that would suggest a major economic downturn. Capacity constraints are not pushing inflation rapidly higher. There is no sign of a major misallocation of resources.

The next recession, when it comes, may not be as recessionary as in the past. Over the past 10 years economists have noticed some big structural changes. These changes are collectively labelled “the fourth industrial revolution.” Changes in the way businesses do business have resulted in greater efficiency. One important area of efficiency has been the management of inventory — the stocks companies keep available.

More efficient inventory management reduces the need to cut inventory levels in a downturn. That lessens the demand impact all the way up the supply chain. That in turn reduces the power of the economic downturn.

The common (though not official) definition of a recession of “two quarters of negative economic growth” may be less likely to occur in the future.

If the risk of a downturn is limited, what is it that is driving global growth? Labor markets in the US and Europe are strong. The extent of this strength is not always shown in the traditional data.
The growth of self-employment is adding income and jobs. Out of date methods of capturing economic data may not pick up on this shift to self-employment. The stronger labor market and better self-employment mean better household incomes than many investors expect. Better household incomes turn into stronger spending power for consumers.

Indonesia should benefit from US and European growth. Global trade is supported by domestic demand in the European Union and the US. These are, after all the world’s largest and second economies. Better global trade helps Indonesian exports. Better exports are not the most important story for Indonesia, however.

Indonesia’s growth pattern is likely to follow other economies in 2018. Just like the US and Europe, it is Indonesian domestic demand that will really drive growth. Government consumption is expected to be a positive contribution to the economy. An expected increase in energy subsidies (for the first time in five years) should also help private spending.

The Federal Reserve has already clearly set out a process of reducing US money supply by tightening quantitative policy. Setting out this policy in advance offers some insurance against political interference with the Federal Reserve’s independence.

The European Central Bank (ECB) will also scale back its bond purchases. This is not the outright reduction in money supply that the US is undertaking. However the size of the ECB balance sheet (a proxy for money supply) should fall relative to GDP (as a proxy for money demand).

This is a milder form of quantitative policy tightening. The European tightening is likely to be softened by the rhetoric of ECB president Mario Draghi. Draghi appears less enthused by the tightening policy than other people at the ECB.

Quantitative policy tightening is, in many ways, more important than monetary policy tightening at the moment. Nonetheless there has been a shift to raise interest rates as well. Canada, the United Kingdom and the US all raised rates in 2017.

The bias is likely to be towards some modest interest rate increases in 2018. Any increase in inflation, even if just through administered prices, will help to support such central bank action.

Central banks may do little more than keep real interest rates stable, but that will mean some nominal interest rate increases. Indonesian central bank policy is modestly supportive of growth at the moment. However, the global tightening cycle probably limits the extent of future Indonesia monetary stimulus.

The economic outlook is therefore relatively benign in 2018. The political backdrop is likely to be less calm. Italian elections are likely early in the year. Anti-establishment parties have a history of support in Italy.

Investors may become worried about the trend of anti-establishment politics in Europe once again. Italian political instability is not exactly unusual, however. Domestic investors, who tend to dominate Italian asset markets, are less likely to overreact to political uncertainties. Domestic Italian investors are used to the instability.

The US mid-term elections in November may be a more serious risk. There is uncertainty over the outcome. This creates uncertainty about future US policy. A rise in the number of Republican members of Congress who intend to retire may also increase uncertainty ahead of the elections. A retiring member of Congress is less likely to prioritise party loyalty. Tax cuts, which should be voted on before the elections, may be less certain if a lot of people in Congress choose to retire.

Global geopolitical risks are currently focused on Korea and Iran. While extreme outcomes are always possible, the risks remain relatively low. Importantly, both in financial markets and the real economy, people continue to ignore these risks. The disruption from such political noise is currently low.

The economic outlook for 2018 is reasonably calm. This is a classic mid cycle position for the world economy. The recovery is passed, and it is far too soon to be thinking about a serious economic downturn.

The political outlook is a little less calm, but political noise should not upset the economic story. It is right to be cautiously optimistic on the outlook for the world economy, and for Indonesia.