Outside Java, there are established areas for industrial development, such as Batam, North Sumatra, Riau and East Kalimantan 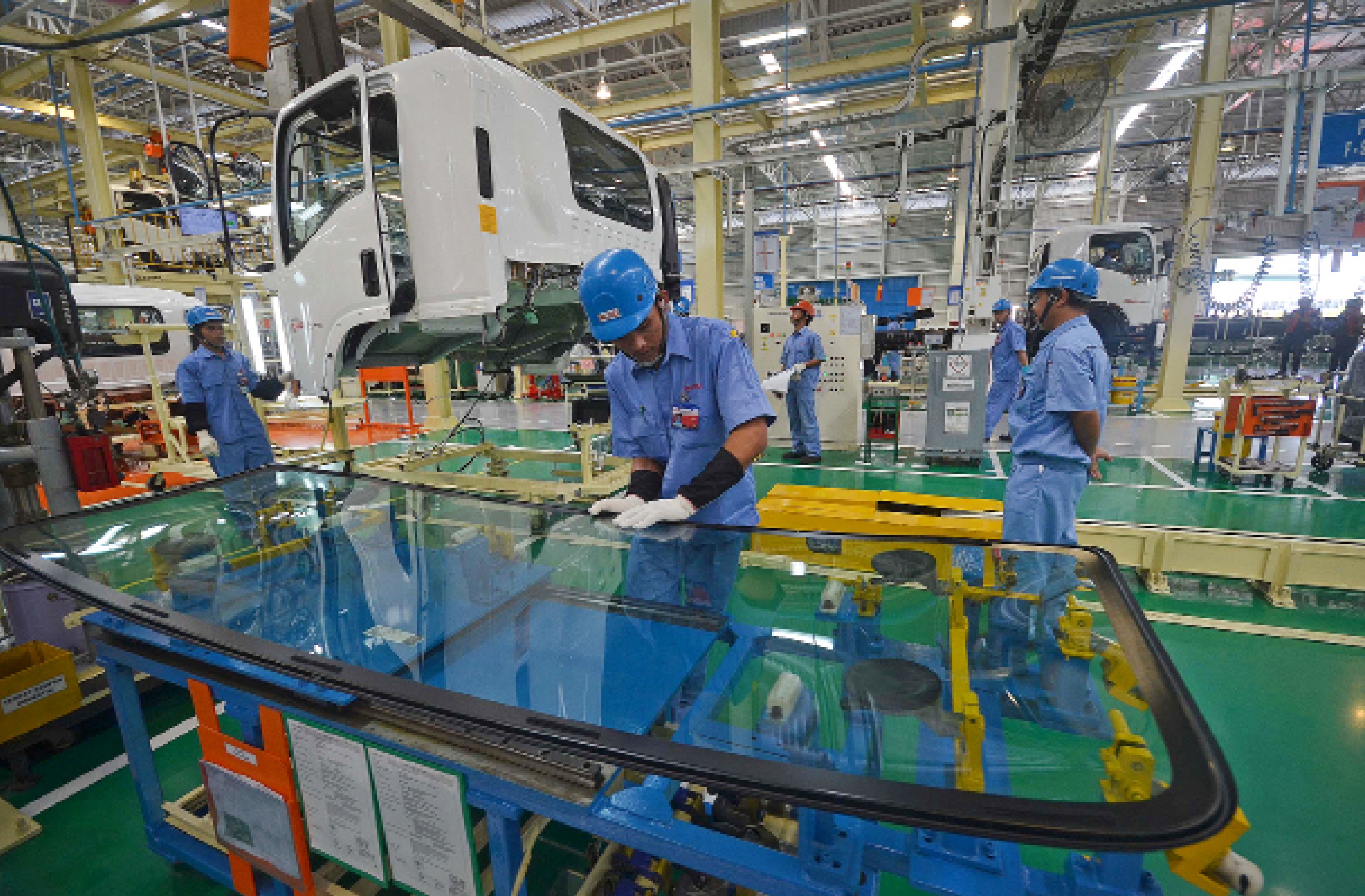 A worker is assembling a car'??s body part in a PT Isuzu Astra Motor Indonesia (IAMI) plant located in the Suryacipta Industrial Area, East Karawang, West Java, on Tuesday. The Rp 1.7 trillion assembly plant, officially launched on Tuesday by Industry Minister Saleh Husin, is set to manufacture Isuzu Elf and Isuzu GIGA trucks with a production capacity of 52,000 units per year, which could be expanded to 80,000 per year in the future. JP/Ricky Yudhistira

Outside Java, there are established areas for industrial development, such as Batam, North Sumatra, Riau and East Kalimantan

The industrial property market in Indonesia mainly focuses on selling land, rather than offering industrial building, and also leans more toward selling than to leasing.

This is particularly because our industrial property market still holds a substantial amount of industrial land for sales.

From landlords’ point of view, the industrial property market experienced a buoyant period that began in 2010, peaked in 2011 and started tapering off in 2013. This was typically a general trend for most property businesses, when all indicators showed increasing rent, prices and absorption rates during the boom.

Particularly for Greater Jakarta, where Colliers closely monitors the general market trend, industrial land prices rose almost threefold during the period. The challenging issue in expanding the area for industrial uses in Greater Jakarta is the high cost of land.

Greater Jakarta, stretching from Serang to Tangerang in the west, Bogor in the south and Bekasi to Karawang in the eastern part of the capital, has been the key industrial area in Indonesia.
Meanwhile, Greater Surabaya in East Java is the next main industrial area, including the city of Surabaya, Pasuruan, Mojokerto, Sidoarjo and Gresik. These two sizeable industrial areas in the western part and eastern parts of Java Island have recorded greater land transaction compared to the other parts of Indonesia.

The availability of ready-to-use industrial land started becoming a major issue in 2012, mainly after a remarkable sales volume was recorded in 2011. Many industrial estates did not anticipate brisk sales that year, and many of them had yet to develop their land stock (raw land) into ready-to-use land. This resulted in the reduction of land sales from potential industrialists who were either looking for a new location or to expand.

Areas with good transportation linkage or good infrastructure, such as those along the main toll roads in Bekasi or Karawang, will always be lucrative for developing or expanding new industrial locations.
Nevertheless, land availability in such areas is limited and in many cases, already in the hands of big corporations.

Meanwhile, for the past few years, we have witnessed the transformation of Central Java into a home for modern industrial estates, particularly in Semarang and its surrounding areas.
Outside Java, there are already established areas for industrial development, such as Batam in the Riau Islands, North Sumatra, Riau, East Kalimantan and some parts of Sulawesi.
Starting a new industrial area is not merely a matter of land availability, though it is a crucial factor. In particular, for non-domestic industrial areas with export-oriented products, the proximity and access to a port is of chief importance. The next immediate assessment is the availability of power sources, including electricity, gas and water.

The sequence of priority may come from different approaches. Industries with heavy use of energy such as smelter (metal extraction process) may take advantage from the abundance of energy sources, like the case of state-owned aluminium producer PT Indonesia Asahan Aluminium (Inalum) as the holding company of state mining companies.

Regions with energy resources including hydropower or coal can potentially be developed for industries that consume cheap energy. Furthermore, other natural supports should also be taken into account, including the ease for infrastructure construction such as roads and ports.

The latter needs a deep sea. Some potential industrial areas may not be suitable for export-oriented industries, if sedimentation in the sea is high and it will be much costly and inefficient to build a long jetty. Groundwater source will be another factor that should be examined to avoid the use of long piping.

Having great infrastructure and immense market, cities such as Jakarta and Surabaya have always been considered engines of industrial growth, as they offer residents opportunities for employment and prosperity.

However, the commercially high land price has pushed industrial activities to shift to greater areas of the cities, which are now having similar issues like the main city itself where land price soared particularly during the property robust in 2010-2013. Several industrial estates in Bekasi regency with limited available land have shifted to focus on building more commercial and residential components rather than expanding their industrial capacity.

All of these are mainly triggered by the growing business and human population that create their own market. Industrial focus is also transforming from selling industrial lands to selling or leasing industrial buildings for warehouse or logistics uses.

With regard to industrial development, when the land acquisition is economical and feasible for expansion, the next step is to carefully plan the market segment. The full export-oriented industry is always associated with the capacity and quality of the port.

The upcoming Patimban deep-sea port, located in Subang, West Java, and scheduled to operate in early 2019, will absorb part of the finished vehicle traffic in the existing facility at Tanjung Priok, which will lead to an accelerating automotive industry in Karawang and Subang.

The Japan International Cooperation Agency (JICA) signed a loan agreement with the government to finance construction and jointly operate the port.

The role of the government in driving the expansion of industrial estates in other parts of the country is of chief importance, because infrastructure needs huge capital. In Japan and China, most industrial zones are developed and maintained by the government, and therefore, they have control over land prices.

In Vietnam, state-owned enterprises control most of the commercial land to improve their productivity, competitiveness and efficiency in the eyes of foreign investors. They are aiming for industry growth, broader manpower absorption and tax revenue.

On the other hand, Indonesia has a legislation instrument to accelerate its industrial sector as stipulated in Law No. 3/2014 on industry, of which in Article 62 says that the central government and local governments must guarantee the availability of infrastructure for industry, including industrial areas and other necessary facilities.

In an attempt to enhance its investment climate, Indonesia has to focus on internal reform. Our Southeast Asian peers, including Thailand and Vietnam, have progressively cleared up issues on infrastructure availability and legal security.

Japan’s outward foreign direct investment (FDI) to ASEAN countries, as reported by the Japan External Trade Organization (JETRO), revealed that investment flow to Indonesia has continued to decline since 2014.

Other growing markets fueled by high economic growth, including Vietnam and the Philippines, on the other hand, have shown recoveries in Japanese investment flows.

In the meantime, the central government has promised to simplify bureaucracy and various business-related procedures, but the challenge remains in certain local governments.  Investors typically have a comparative analysis of countries, and therefore, will demand a transparent system and procedure with regard to timing and real costs.

Among reputable global institutions, Indonesia is expected to overcome a range of constraints on growth in the future, and thus, fully leverage its positive economic trends, offering investors a lucrative market opportunity from its natural resources and demographic bonus. Other captivating news comes from a recent report by the World Bank entitled Doing Business 2018: Reforming to Create Jobs, in which Indonesia ranked 72nd out of 190 countries in the ease of doing business.

This means Indonesia rose 19 positions from 2017, when it ranked 91. We certainly hope the country’s political situation and economic reform will be stable in 2018, and for infrastructure to progress as planned.

As such, we strongly believe that the industrial property market will gain enough momentum to recover in 2018 or in 2019, and continue to accelerate in the following years.