Nationwide student marches: A moral force despite the odds

Wijayanto
Director of Center for Media and Democracy, LP3ES and lecturer at the department of politics and government, Diponegoro University, Semarang 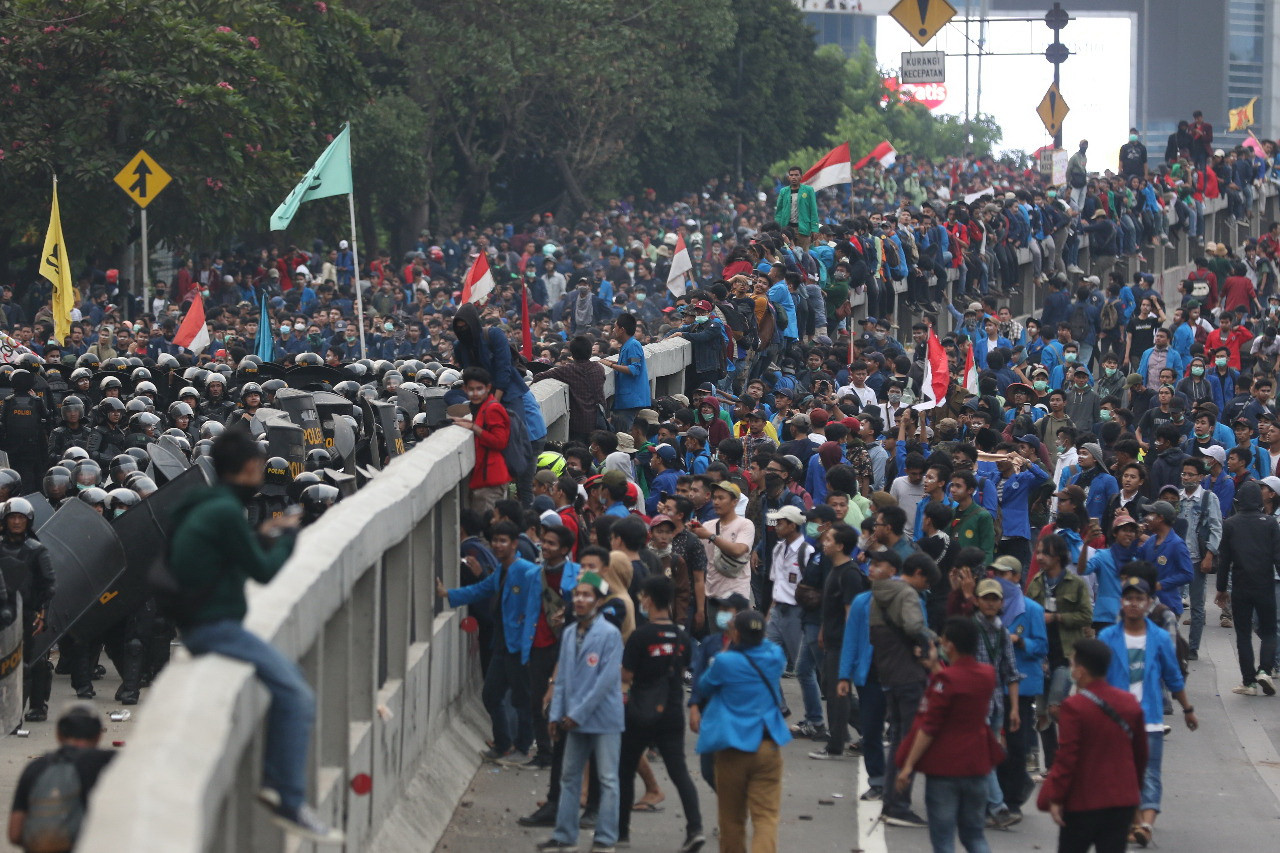 Students protest against the planned revision Criminal Code and the revision to Corruption Eradication Commission law in front of the House of Representatives building in Senayan, Jakarta on Sept. 24. (JP/Dhoni Setiawan)

Wijayanto
Director of Center for Media and Democracy, LP3ES and lecturer at the department of politics and government, Diponegoro University, Semarang

Student protests have erupted in major cities, including in Yogyakarta, Bandung in West Java, Surabaya in East Java, Surakarta, Semarang in Central Java, Balikpapan in Kalimantan, Banda Aceh in Aceh and Makassar in South Sulawesi, apart from the capital. As millennials and post-millennials — as many were perhaps under 21 years old — they displayed creative messages such as: “Today we empty the coffee shop. We will have coffee at Senayan.” Mobilization to rally included the use of hashtags, such as #GejayanMemanggil (Gejayan calls, in reference to a major street used for protests in Yogyakarta) and #Surabaya Menggugat (Surabaya accuses).

Some reactions have been positive, such as in a comment on social media, “All this time the future generation had appeared to have fainted and now they have woken up”.

Many, however accuse them of being manipulated by elites for their private interests. Images of students involved in violent behavior, such as smashing chairs at the Pare-pare Council in South Sulawesi, will worsen their credibility, whatever the cause.

Nevertheless, the latest nationwide student demonstrations should be seen as a progressive movement to save the future of Indonesian democracy. The following are a few factors that affect the movement’s growth and sustainability.

First, this wave of student protests reflect growing disappointment in democratic institutions, mainly the House of Representatives and the President, who have ignored the voices of civil society, including their own voters.

Today’s student movement follows a long process and earlier movements. Recently, more than 3,000 academics from more than 30 universities signed petitions to protest revisions to the Corruption Eradication Commission (KPK) Law. But the movements failed to stop the bill.

Other problematic bills feared to be passed in a rush with little public dialogue are a land bill and Criminal Code (KUHP) bill, the latter of which is perceived to limit civil liberties, press freedom and interfere too much in the private sphere.

Second, the protests are a moral force that push for corrections to state policies. Students seem to have perceived a serious threat to ongoing political reform and believe the country is on the brink of returning to the New Order Era.

Disillusionment widened, not only because the regime did not listen but also because of how the power holders responded to the criticism. For example, academics recently experienced intimidation and hacking of their cell phones. These including messages supporting the revision of the KPK Law apparently sent from individuals known for the opposing view. We strongly sense this involved the powers who wished to silence academics who were critical and resistant to the revised KPK Law, for instance.

Particularly, amid reports and surveys of “radicalized” academia, rectors and other leaders of state-run higher education institutions, signs are that the elected rector would have to gain approval by the president, taking into consideration the advisement of the higher education minister.

Thus, the elites in universities must stay close to the power holders to secure their position. This explains official bans from some campuses in Yogyakarta to prevent students from joining the protests, though such bans were ineffective in preventing the spread of the student marches.

It would indeed be difficult to tame students and academics as universities aim to find and speak the truth, though some might be reproducing the version of the truth provided from the regime in power.

The fourth is related to the independence of the student movement. For this, we need to review the issues being campaigned and the source of funding. In general, the students rejected the immediate deliberation and passing of the KUHP revision, aside from other controversial bills, and protested a revision to the Corruption Law. Where did the funds come from?

At least for the student movement in Semarang, students raised funding from among themselves. They just came and rallied together. No lunch boxes were distributed. Some elements of civil society and concerned lecturers cooperated to support them, but any funds raised would be insignificant compared to the students joining the movement in so many cities.

Finally, the effectiveness of the movement may depend on its ability to make the grass roots understand and relate to the issues. Just like the academic movement, the student movement will also fail if it is exclusive among themselves. In this case, the role of the media as part of civil society becomes very important.

As long as students are loyal to their initial intentions and idealism to save democracy regarding problematic bills, they will be able to influence the regime. In fact, the passing of several bills has been postponed.

Following the advice of prominent public figures on Sept. 26, President Joko "Jokowi" Widodo said he was mulling over annulling the already approved revisions to the KPK Law, by enacting a government regulation in lieu of law — among the students’ main demands. Despite the challenges, this protest movement will hopefully help encourage more meaningful change to the current state of Indonesian democracy.