No honeymoon for Jokowi and Ma'ruf after inauguration 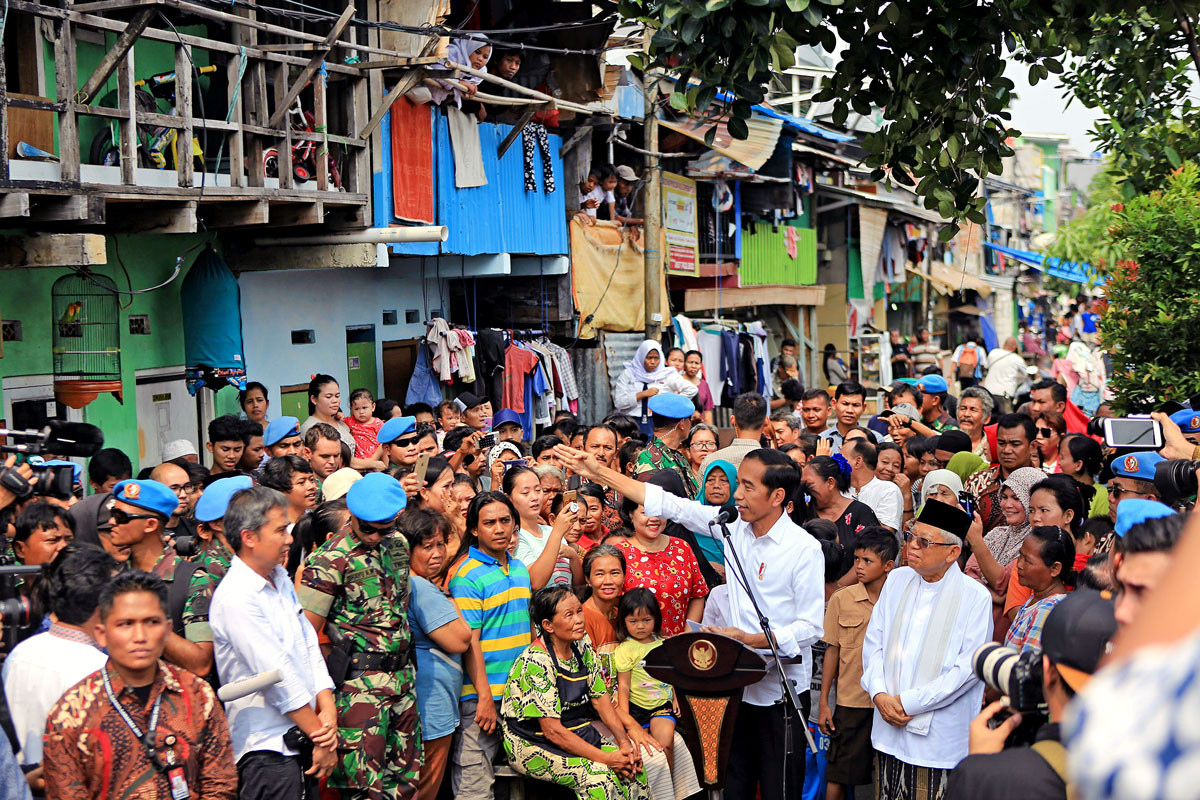 The People's Consultative Assembly (MPR) is currently organizing the inauguration ceremony for Joko “Jokowi” Widodo and Ma’ruf Amin. The pair won the presidential election in April 2019, and they are scheduled to be inaugurated on Oct. 20.

Some of their supporters have recently asked for the time to be moved forward to Oct. 19, but that request is likely to be dismissed by the MPR. Jokowi himself has said, the inauguration time is not up to him, but the MPR must follow the decision of the General Elections Commission (KPU). Regardless, the pair will be inaugurated, and they will begin to work together as a team.

The eyes of the public are on them awaiting their quick and sure moves to fulfill their promises during the pre-election campaign. When asked about the structure of his cabinet, Jokowi simply replied, that will be announced immediately after the inauguration.

Jokowi’s response implies that he isn’t planning to go away for a honeymoon with his vice-president after the inauguration. He is not even intending to slow down his usual busy routine. Simply no time to sit back and relax.

No surprise. Jokowi himself has been known as a man of hard work. During his first term, he worked tirelessly and for long hours. He even named his cabinet the Working Cabinet (Kabinet Kerja). Truly the name is a sign, or in Latin, nomen est omen; the name signifies his philosophy and commitment, a sign of appreciation of hard work.

As this is his second (and last) term in office, understandably some expect Jokowi to slow down in his approach to work. But that isn’t likely to happen. We may see the opposite; he will work even harder and longer than previously. Those who work with and for him in the next cabinet would thus be expected to work as hard as him. But are they prepared and ready for the challenge? Let us wait and see.

As noted, the first thing Jokowi would do after the inauguration is to officially announce his cabinet. Only then we will know who is in, and who is out. Following this announcement there would be meetings with the cabinet members, one to one or together.

The public reactions to the cabinet – positive and negative – are also to be anticipated following the announcement. And these reactions themselves could pose a challenge to Jokowi and Ma’ruf; something that cannot simply be ignored.

Without that unity, Jokowi could find himself a loner in the journey, and could become an easy target of antagonism. This sounds a little frightening though, but it should be seen as an anticipation in order to avoid disunity that could hinder success in implementing key promises.

The frequent street protests that we have seen over the last five months seem to suggest that there could be more similar types of demonstrations. This means Jokowi and Ma’ruf won’t be left undisturbed. It won’t be smooth sailing. The series of incidents after the April’s general election, if any, indicates just that.

It indicates that the Indonesian democracy post-1998 Reform Era remains fragile. It requires patience and hard work to establish a consolidated democracy. In particular, the recent attempt of the House of Representatives to weaken the Corruption Eradication Commission (KPK), one of the products of Reform, is a warning sign to Jokowi of more similar attempts to come.

The appointment of Muhaimin Iskandar of the National Awakening Party (PKB) and Aziz Syamsuddin of the Golkar Party as deputies of Puan Maharani as Speaker of the House, could compromise Jokowi’s strong anti-corruption position. Both Muhaimin and Aziz were once targeted by the KPK. La Nyalla Mattalitti, former chairman of the Soccer Association of Indonesia (PSSI), was also elected as speaker by the members of the Regional Representatives Council (DPD); and as we know he was once accused for corruption.

Looking closely at the current composition of the House for the 2019-2024 term, there are 14 actors and singers, and nearly half of the 575 lawmakers have backgrounds in business.

The return of Yahya Zaini, a Golkar politician, to the House, is also an interesting one. As we know, his career in politics was cut short in 2006 after the online circulation of his sex video with a dangdut singer. Whether the presence of these members of the House is going to strengthen or weaken Reform movements, such as the eradication of corruption, it is yet to be seen.

The challenge from the House particularly on the issue of corruption, I suspect, is going to be one of the key challenges during Jokowi’s second term in office. Heated debates on the issue in the House won’t be stopped, or at least cooled down, without Jokowi taking a firm stance on what he believes needs to be done to create a clean government free of corruption.

Partly for this reason, from day one onwards after the inauguration Jokowi would waste no time in ensuring that he remains committed to the effort of eradication of corruption. In order to have any hope for success in this endeavor, Jokowi will need to choose the right people for his cabinet; those who share the same vision and commitment. Without that, as said earlier, he will be left alone in the pursuit and with very little hope of success. Unity within the cabinet is key to its success.

Facing the challenges ahead, Jokowi won’t have a honeymoon with Ma’ruf after the inauguration. Truly, they don’t have the time to look at each other and absorb their new reality that they are in it for the next five years. They will need to start to work as a team.