Tangguh Chairil
Lecturer in security studies at the department of international relations at Binus University, Jakarta, and secretary in the working group on strategic and high-tech industry at the National Economic and Industry Committee (KEIN). 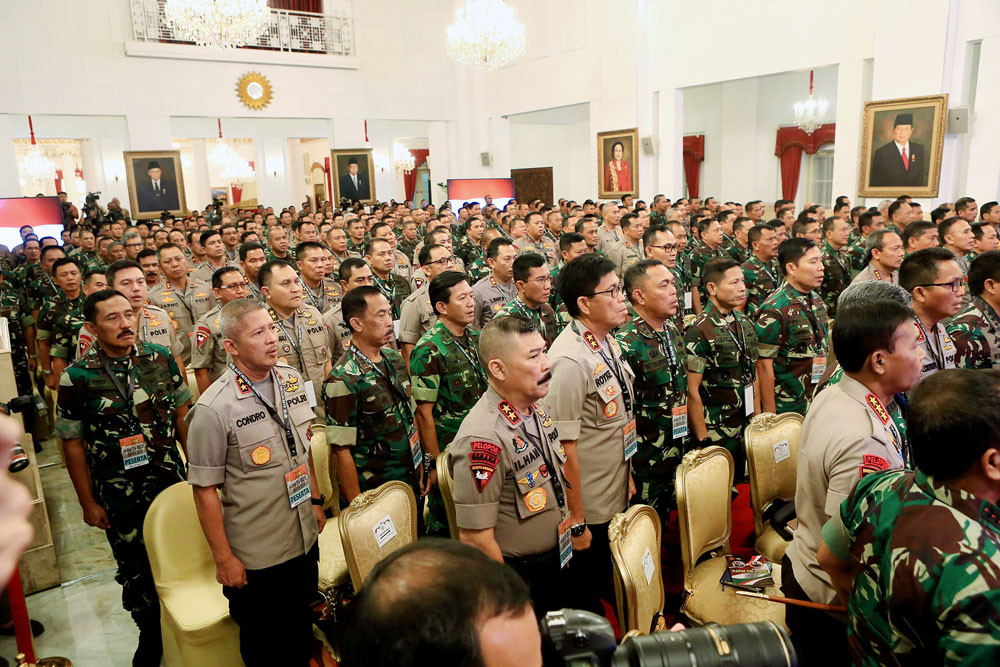 High-ranking officers of the Indonesian Military (TNI) and the National Police stand to attention at an annual meeting at the Presidential Palace. The meeting was attended by 198 TNI generals and 170 police generals. (The Jakarta Post/Seto Wardhana)

Tangguh Chairil
Lecturer in security studies at the department of international relations at Binus University, Jakarta, and secretary in the working group on strategic and high-tech industry at the National Economic and Industry Committee (KEIN).

In the spirit of mending relationships following the recent Idul Fitri festivities that ended the fasting month, it is worth revisiting the relations between the “old brothers” — the Indonesian Military (TNI) and the National Police — that emerged in the spotlight during the election-related protests and riots.

At least three cases of hoax related to both went viral shortly after the May 22 riots: A video alleged that a member of the TNI’s Strategic Intelligence Agency (BAIS) provoked the masses to resist the police; a captioned photo claimed that the commander of the Sungai Kakap military command, West Kalimantan, was shot by police in a security incident in Pontianak; another photo asserted that police Mobile Brigade (Brimob) personnel were disguised as Navy soldiers to defame the TNI during violence against the masses.

Other hoaxes slandered the police’s public image: There were allegations that some police members securing the protests were Chinese nationals; a doctored video claimed that National Police chief Tito Karnavian authorized the police to shoot at protesters; a captioned photo misled readers into thinking that a mosque in Sri Lanka was a Jakarta mosque after a raid by the police and Brimob.

Politicians also issued statements pitting the TNI and the police against each other: A political party’s official social media account suggested that police personnel in charge of the protests should imitate the TNI’s approach, which it claimed was more well-received by the public.

Fortunately, both services managed to avoid clashes against each other for now.

However, this phenomenon begets two questions: Why have there been numerous attempts to incite a feud between the TNI and the police? And why do the police seem to be more distrusted than its “elder brother”, which it was once part of?

To answer the questions, we need to look at the historical context of their relations, as well as the performance of security sector reform of the military and the police.

From 1962 to 1999, both services were integrated under the name ABRI, becoming the New Order regime’s violent instrument of power in ensuring complete control over society.

The military enjoyed primacy in ABRI, while the police was frequently dominated by the Army, which interfered into police work whenever it considered that the regime’s security was on the line.

After the New Order, the military and the police were separated again. Under the framework of security sector reform, both services underwent transformative changes.

The TNI is now basically only responsible for national defense, while the police are assigned internal security tasks. Both services were withdrawn from politics and pushed to institutionalize democratic control and improve professionalism, with mixed results.

Military reform succeeded in returning the TNI to the barracks; the lack of internal security tasks limits the chances within which it could be engaged in brutal violence against the people.

Reform efforts have also managed to achieve significant results regarding the TNI’s sociopolitical roles, despite gaps in other pillars of the reform. This reform has transformed the TNI into a more widely trusted state institution than before, erasing violent memories of the past.

However, police reform remains stagnant, especially in transforming the force into civilian police. Its internal security tasks mean there is a greater probability of police clashing with the people, such as during protests.

This often leads to a dilemma for the police, which could better enforce the law given its internal security mandate, but could risk human rights consequences. As the National Commission on Human Rights (Komnas HAM) reported, most human rights violations reported throughout 2017 were conducted by the police.

The Indonesian Survey Circle (LSI) also found public trust with the TNI was the highest, with 90.4 percent public trust compared to the police’s 87.8 percent.

It does not help that there has been bad blood between the TNI and the police. The online media outlet Tirto.id reported that from September 2002 to June 2018, 13 clashes and fights occurred between the TNI and police members, resulting in six deaths and at least 24 wounded victims.

Scholars and observers have also commented that after the New Order, jealousy of Army personnel against the police emerged regarding welfare, political opportunities and contacts with the community, fueling hostility between them.

Therefore, the police should address major strategic gaps in its reform, most importantly in transforming itself to have a civilian character. It should prioritize dialogue and a preventive approach in handling internal security issues, rather than a repressive approach.

The police have actually improved in recent years: Komnas HAM reported public complaints of human rights violations by the police declined from 2016 to 2018. The TNI should also further address the gaps in its own reform.

Public officials and politicians should also refrain from fueling sentiments between the TNI and the police by avoiding verbal provocation, as well as any forms of influence on both of the supposedly neutral state apparatuses.

The press should also correct its value bias in framing the TNIpolice relations. They should prioritize reporting cooperation between the TNI and the police, rather than focusing only on their disputes.

Lastly, the government needs to counter hoaxes and disinformation spread in blogs and social media that pit the TNI and the police against each other. Civil society assistance in countering hoaxes and educating society with the facts is also vital.