Ibrahim Almuttaqi
Head of the ASEAN Studies Program at The Habibie Center, Jakarta 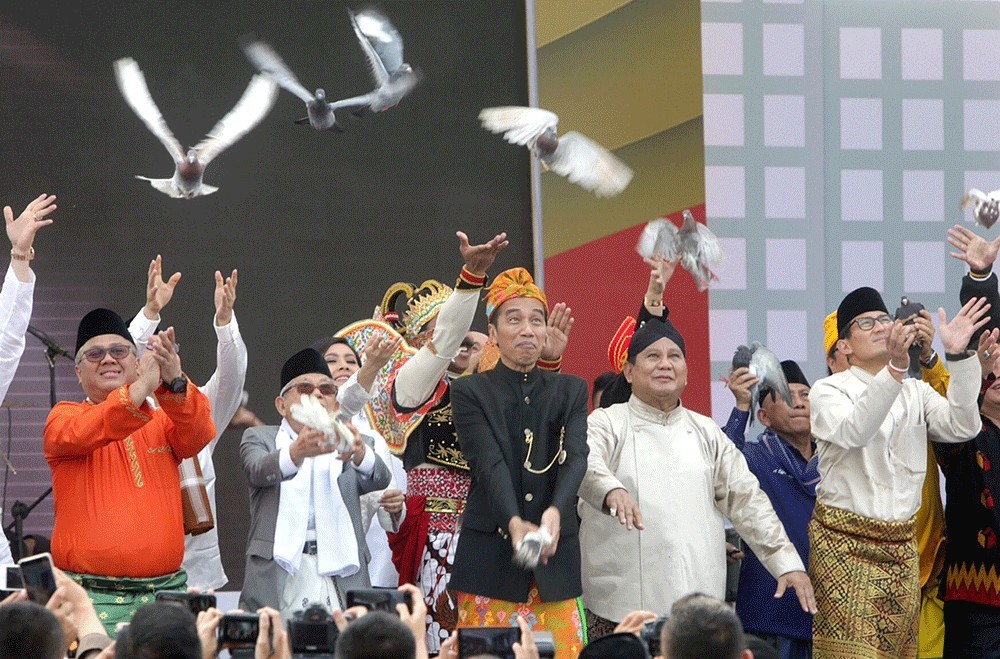 Give peace a chance: President Joko “Jokowi” Widodo (center), who is running for a second term, and his running mate Ma’ruf Amin (second left), along with presidential candidate Prabowo Subianto (second right) and his running mate Sandiaga Uno (right), release pigeons during a peace declaration for the 2019 election campaign at the National Monument in Jakarta. (The Jakarta Post/Wendra Ajistyatama)

Ibrahim Almuttaqi
Head of the ASEAN Studies Program at The Habibie Center, Jakarta

On April 17, a record 80 percent of the Indonesian electorate cast their votes at polling stations. However, to borrow the famous words of former United States president Bill Clinton: “The people have spoken, but it will take a while to determine exactly what they said.”

Certainly, the official results will not be known until the General Elections Commission (KPU) completes its month-long real count, which involves counting the votes manually at the subdistrict, regency/municipal, provincial and finally, the national, levels.

Fortunately, a number of pollsters have released quick count results for those impatient about waiting for the official announcement. Based on a sample of votes taken from a selection of polling stations across the country, these quick counts indicate the likely results of the official tally and have proven remarkably accurate in previous elections.

Interestingly, the pollsters have all reached very similar conclusions, with Joko “Jokowi” Widodo-Ma’ruf Amin securing 54-56 percent of the vote and Prabowo Subianto-Sandiaga Uno trailing at 44-46 percent.

Given that the different pollsters have all ended with similar quick count figures, we have a strong sense of certainty about the official result: a second term for the incumbent.

But his opponent has not given up the fight. As in the 2014 presidential election, Prabowo has refused to accept the quick count results and instead claimed victory. Shortly after voting closed, the former Army Strategic Reserve Command (Kostrad) commander declared that his own “internal data” was based on supposedly actual results from 300,000 polling stations that indicated he had won with 62 percent of the vote. The claim appears somewhat implausible for two reasons.

First, having trailed in preelection surveys with his electability ranging somewhere in the mid-30 percent, this would mean an unlikely swing of 30 percent in favor of Prabowo in the final days leading up to the election.

Second, given that the polling institutions have based their quick count on a sampling of 2,0005,000 polling stations across the country that required several days to complete, it is questionable how the Prabowo camp was able to tally the votes from 300,000 polling stations in mere hours.

Despite this, many seem to genuinely believe Prabowo’s claim to victory.

Perhaps in an effort to remain ahead in the battle of public perception, the Jokowi-Ma’ruf campaign team has declared the incumbent the winner and President Jokowi has abandoned his previous measured calls to wait for the official results.

Having won plaudits from around the world for the largely smooth and peaceful elections, the last thing the country needs is a disputed outcome with both candidates claiming to be the rightfully elected president.

Fortunately, the markets seem to be undisturbed by this unnecessarily manufactured uncertainty, with the Indonesia Composite Index (IHSG) closing the first postelection trading day at 6,507 points, up 0.40 percent.

Mention should also be made of the legislative election, which was somewhat overlooked given the intense focus on the race for Merdeka Palace.

Interestingly, for all the discussion on Indonesia becoming more religiously conservative, the quick count results suggest that Islamic parties only secured around 29 percent of the popular vote — similar to 2014. It would thus appear that alarmist headlines saying that Indonesia was descending into hardline Islam were off the mark. The quick count results of the race for seats at Senayan also indicate that proJokowi parties will dominate the new House of Representatives.

Of the seven parties that supported Jokowi’s candidacy, five appear to have passed the legislative threshold (4 percent) to claim House seats. Together, these five parties secured 54 percent of the popular vote in the quick count.

Jokowi should thus benefit from having a majority in the House to push through his legislative agenda, although it remains to be seen whether or not he will take advantage of it.

He certainly failed to do so in his first term, despite eventually controlling the House when Golkar switched camps during his second year in office. The President would be wise not to waste this golden opportunity and should take heed of the lessons from his predecessor, Susilo Bambang Yudhoyono.

Yudhoyono was widely regarded as having failed in fully utilizing the strong position in which he found himself at the start of his second term.

Jokowi should thus reflect on how to avoid a similar fate and ensure that his legacy remains intact beyond his second term.

To do so, Jokowi should reassess what went right and what went wrong during his first term. That the President barely improved on the 53.15 percent he secured in 2014 should be some cause for concern. A wake-up call is clearly needed to examine why Jokowi’s electoral figures did not improve significantly, despite his massive infrastructure push and bureaucratic reforms, as well as his choice of religious cleric Ma’ruf as running mate.

Perhaps a good place to start would be the rival Prabowo-Sandiaga pair, which raised some valid criticisms of Jokowi’s leadership during their election campaign. Problems in the BPJS Kesehatan (Health Care and Social Security Agency) program, wealth inequality and pervasive corruption, among others, remain issues for the new government to resolve.

Meanwhile, Prabowo would do well to remember his own criticisms of Jokowi — that the incumbent is surrounded by “yes men” — and reflect on those around him. Surely, there is someone in the Prabowo camp brave enough to speak the truth.

Following the success of the simultaneous presidential and legislative elections, Indonesia has arguably both maju (advanced) and menang (won). To rephrase Clinton: The people have spoken, now is the time for all — Jokowi, Prabowo, and the new House — to work together in delivering advancement and victory for Indonesia in 2019-2024.

The views expressed are his/her own.