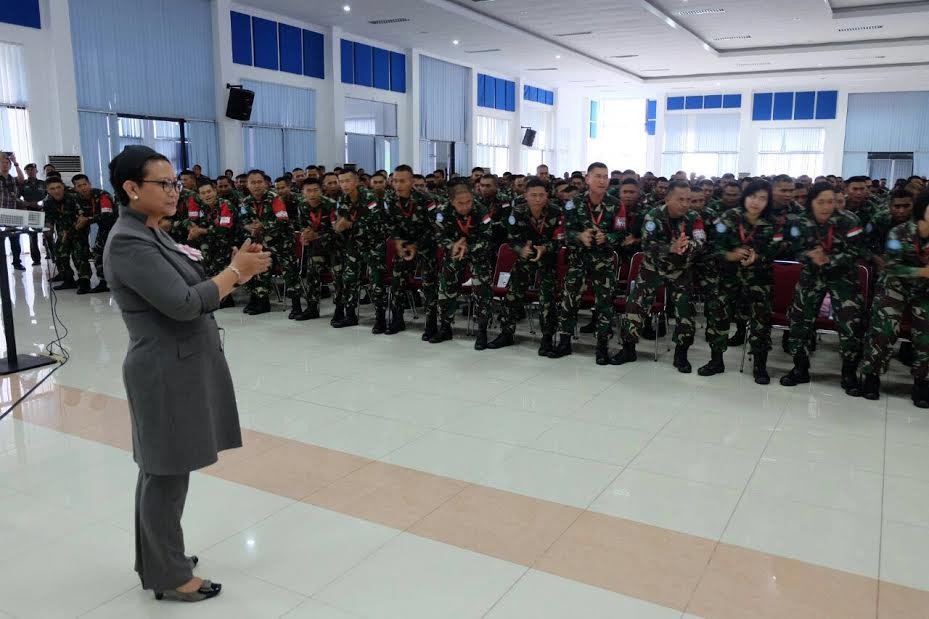 One week into 2018 and Indonesia’s diplomacy is in full swing.

I was also in Davao for a special ceremony that marked the handover of passports to around 1,000 Indonesians who have been living for generations in the southern Philippines. With the new passports, they have a clear identity, based on which they can now receive better services from the local government.

Their children can go to school and receive a better education. This is essential for a better future. They are recognized as Indonesian, and the government is present to protect them.
It is touching that, despite their years, even generations, of living abroad, they still love and are proud to call themselves Indonesians.

Second, on Jan. 5, I officiated the groundbreaking ceremony for the new ASEAN Secretariat building. ASEAN remains a cornerstone of Indonesia’s foreign policy. Echoing President Joko “Jokowi” Widodo in his speech celebrating the association’s golden jubilee last year, “with Indonesia, ASEAN is strong and with ASEAN, Indonesia continues to progress.”

Indonesia envisions a strong ASEAN, far stronger than what we have today. An ASEAN that can effectively cater to the needs of its people. An ASEAN united with its centrality, meeting today the great regional and global challenges.

Strengthening Indonesian-Indian cooperation on security and defense as well as trade and investment was high on the agenda in our bilateral meeting. Indonesia and India’s strategic role in the Indo-Pacific region was also a key point of discussion. Indonesia will work with India to continue to develop a regional architecture of peace, security and prosperity in the Indo-Pacific, including through strengthening IORA (Indian Ocean Rim Association).

These agendas are a taste of what will be another busy and challenging year for Indonesia’s diplomacy.
Fast-moving events will continue to attract our active participation and contribution. A world that continues to revolve around regional and global cooperation, where nations compete and cooperate simultaneously, crowded by big political personalities as well as instant and breaking news, will be the strategic landscape of 2018.

Where is Indonesia in this global strategic landscape? What is Indonesia’s foreign policy outlook in 2018?

For peace and humanity
As we know, 2017 was a year where many countries recognized and appreciated Indonesia’s peace and humanitarian diplomacy. The world of 2017 was also full of surprises and uncertainty. New tensions and old conflicts persisted in many parts of the world. Competition and cooperation continued to flourish especially in the economic area.

Even prior to the very end of 2017, Indonesia’s diplomacy was at work garnering the international community’s support for the Palestinians in their most recent trials and tribulations. Indonesia voiced its call through bilateral and international channels, including the Organization of Islamic Cooperation (OIC), Non-Aligned Movement and the United Nations.

Indonesia has always encouraged and supported Myanmar’s peaceful political transition to democracy.
Facing such a challenging situation in Rakhine state, which could well alter Myanmar’s path of development and even roll back its path to democracy, Indonesia is obliged to once again lend its steadfast support.  Thus, Indonesia, along with ASEAN and other partners, undertook constructive engagements, concrete initiatives and support to help resolve the humanitarian situation. Indonesia also played a bridging role to ensure effective cooperation between Myanmar and Bangladesh in dealing with refugees.

These two episodes reflect clearly Indonesia’s diplomatic activism in the area of peace and humanity. It is an area in which Indonesia — its government and people — marches forward in unison in its contribution.

Throughout countless communications I established with colleagues from Asia, Europe and the Middle East, it is heartening to receive appreciation and encouragement for Indonesia’s continued role and initiatives. Nevertheless, Indonesia’s diplomatic agenda at the bilateral, regional and global level in 2017 covered more areas and strategic issues. Let us take Indonesia’s initiative to elevate cooperation of IORA to the summit level.

Indonesia always regards the Indian Ocean as the future. There should be a strategic and inclusive mechanism that links both the Indian and Pacific Oceans. This is a strategic vision that Indonesia has been nurturing for the past two decades or so.

2018 global strategic outlook
No one has the crystal ball to tell exactly what the world will look like in 2018. My reading on 2018 is based on my observations on a number of salient issues and trends. The good news is that many predict continued global economic recovery in 2018. However, the same optimism cannot be applied to the security-political realm.

Here is the real challenge for us all: Seeking good and mutually beneficial global governance within a new international political landscape where some countries do not seem to have the same moral and political commitment toward international agreements and obligations.  Alas, the world will still confront global uncertainty, even instability, this year. We may still face competition among major powers that would manifest itself in many proxy conflicts around the world. The dynamics of world politics in just 280 characters of tweet-storms will also continue to exist.

Let us not forget also, the world remains vulnerable because of existing threats to security. They come in the forms of nuclear proliferation, terrorism, transnational crime and xenophobia. Fortunately, the world never lacked the strong global willingness to forge closer cooperation. The spirit for collaboration persists. It is also global collaboration that will sustain the momentum for economic recovery, while at the same time, contain it from any negative impacts of security-political shifts.

First, at the global level, Indonesia will intensify its partnership with like-minded countries with a view to maintain global peace, security, stability and prosperity. Our contribution to world peace is not only a constitutional obligation, but has always been the DNA of Indonesia’s foreign policy. To contribute more, Indonesia aims at being elected in June 2018 as a non-permanent member of the UN Security Council 2019-2020. It is part of the parcel of Indonesia’s commitment to become a true partner for peace, security and prosperity.

As the world’s largest archipelago, Indonesia will maintain its leading position in promoting maritime cooperation by hosting the Our Ocean Conference in 2018.  Second, high on Indonesia’s foreign policy agenda is nurturing regional mechanisms and architectures. While continue to ensure ASEAN’s unity and centrality, Indonesia shall encourage ASEAN to be more responsive to regional and global strategic circumstances.

Indonesia shall intensify its diplomatic efforts to nurture an effective and comprehensive regional architecture in the Indian and Pacific Oceans. It is an architecture that combines three continents and two of the world’s major oceans, which paves way for new centers of growth in our region. Events such as the Indonesia-Africa Forum 2018 shall be the building blocks to greater cooperation along with a number of bilateral initiatives including the President’s visit to a number of countries in the Indian Ocean Rim.

Foreign policy and diplomacy shall always be dedicated to advancing Indonesia’s national interests. That includes better service and protection for Indonesian nationals abroad by improving the system.
Moreover, diplomacy continues to be the first line of defense through intensive negotiations on land borders and maritime delimitation. After all, good fences make good neighbors.

There are many more items on Indonesia’s foreign policy agenda.

Finally, Indonesia’s foreign policy and diplomacy in 2018 shall remain focused on its ideals and activism. Each and every Indonesian diplomat understands and follows this call.
May 2018 bring more success and prosperity to Indonesia.

The writer is the Indonesian Foreign Minister.