Why fix KPK when it is not broken?

Sofie A. Schütte
Deputy director of the U4 Anti-Corruption Resource Institute at the Chr. Michelsen Institute in Norway 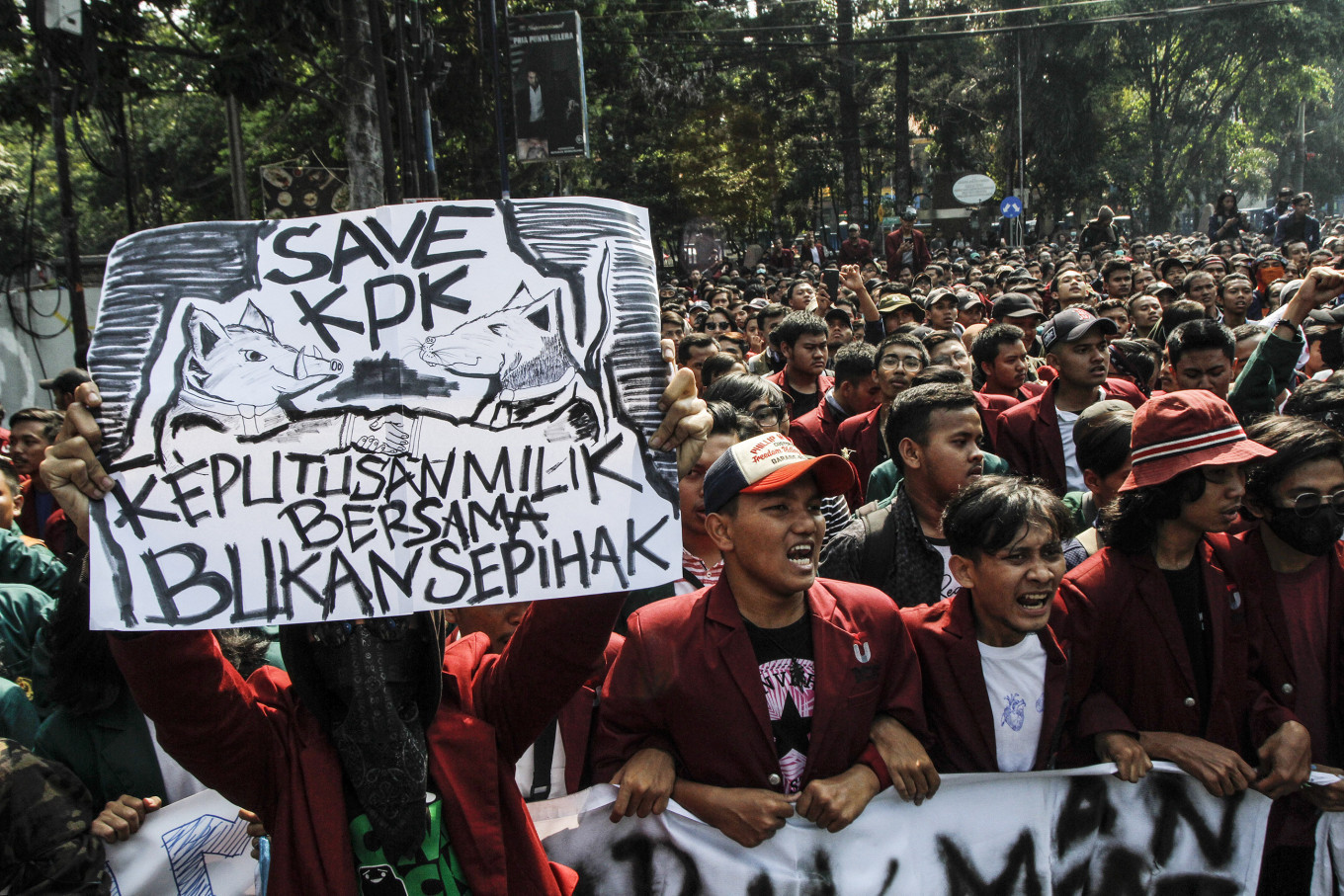 At least 1,500 students from 25 universities in the Greater Bandung region took to the streets to express their rejection of the discussion of the Draft Law on the Criminal Law, the Land Bill, and the Penitentiary Bill on Jalan Diponegoro, Bandung, Monday (9/23). These students also memento the government and the Parliament to cancel the Corruption Eradication Commission Act recently passed by the government. (JP/Arya Dipa)

Sofie A. Schütte
Deputy director of the U4 Anti-Corruption Resource Institute at the Chr. Michelsen Institute in Norway

Indonesia’s most promising attempt at controlling corruption and an inspiration for its peers internationally is about to lose a lot of what enabled it to be so effective and trusted because of changes in law that the House of Representatives just pushed through. In my native German, verschlimmbessern is a colloquial term for improving something for the worse. The new KPK Law does just that.

“Anticorruption commission needs support of public”, the title of an article I wrote in this newspaper in 2004, was published just three months after the first generation of commissioners of the Corruption Eradication Commission (KPK) was appointed and had taken up the challenge of building a new organization from scratch.

Then executive director of the Partnership for Governance Reform in Indonesia, HS Dillon, who passed away on Sept. 16, had entrusted me with the task of supporting the KPK and making its mandate better known.

I write this article in memory of Pak Dillon, who was very outspoken against corruption in Indonesia, yet optimistic it could be reduced by fostering “capacity from within and pressure from outside”.

Expectations were high that the KPK could achieve something that other law enforcement agencies and previous anti-corruption task forces had not been able to do: end impunity in corruption cases, in particular in cases involving trillions of rupiah and high-profile suspects. It did not disappoint and over the last 15 years the KPK received public attention and support of which other agencies in Indonesia and abroad could only dream.

When I heard that a bill to revise the KPK Law was tabled by outgoing legislators, I thought the President would never consent, that he was supportive of the KPK and owed outgoing lawmakers nothing.

But he did. I thought that with three weeks left in their term, the legislators would not dare and that — going by their track record — they would never get such a controversial bill passed so quickly. I also assumed that there would be mass demonstrations against it.

I am still shell-shocked, as I believe many in the Indonesian and international public arena are, that the House acted so swiftly that it outmaneuvered any meaningful public discussion, and that the President consented to this.

The KPK is very loosely modeled after the Independent Commission Against Corruption in Hong Kong, with a preventive and investigative, but also a coordinating and prosecutorial mandate. Its most crucial components of authority, such as wire-tapping, searches and seizures without warrants, however, have evolved from experience with previous anti-corruption initiatives in Indonesia and the fact that existing law enforcement agencies were “not effective and efficient in addressing corruption”, as stated in the 2002 KPK Law.

The KPK was created as a completely new state agency, “that will perform its duties and authority independently, free from any and all influence”.

After 17 years, the law suddenly must provide that the KPK is part of the executive family. Deliberation by the House only lasted a week.

Admittedly, its members (in fact several generations of them) have tried for years to reduce and revoke KPK’s powers, stalling the approval of important budget decisions, and selecting commissioners with dubious track records when more appropriate candidates were also on the shortlist.

But until recently, the KPK was able to overcome all these obstacles, most notably due to public trust and support and strong internal systems to monitor and maintain the integrity of its leadership and employees.

Time and again Indonesian civil society has taken to the streets in support of the KPK and protected it against backlash by vested interests. Among other instances there were the movements dubbed “gecko versus crocodile” and “Coins for the KPK”.

The KPK has won public trust, not just because it has put behind bars hundreds who have abused their powerful positions and who previously were considered untouchable, but also because it has undoubtedly portrayed a vision of an Indonesia where things can get done without corruption.

The KPK’s autonomy in managing its own human resources has allowed it to shield itself against the malpractices and distortive incentives that inflict the general civil service system. And it is not the level of KPK salaries that insulates against temptation, it is its simple and transparent structure and performance orientation.

Civil service reform has yielded some improvements in the general administration, but why change something that does not need fixing? Why subdue the KPK to a system that cannot offer the same level of scrutiny in recruitment, progressiveness in personnel development, transparency and performance orientation?

Indonesia could be proud for not only having initiated and hosted such a conference and the further promotion of the principles at various international events, but also for actually being home to one of the few agencies that comply with the principles.

One key principle is that “ACAs shall have the power to recruit and dismiss their own staff according to internal clear and transparent procedures”. By putting the KPK officers back under the civil service umbrella, a lot of the previous autonomy has been taken away from the KPK.

There may still be room to rectify some of the curtailments and protect against intrusion, by consulting with the KPK and other anti-corruption experts in crafting the implementing regulations of the new KPK Law.

The fixing needs some fixing, or Indonesia is likely to lose one of its most trusted institutions and the international anti-corruption community an inspiring role model.