13 more government agencies to be disbanded 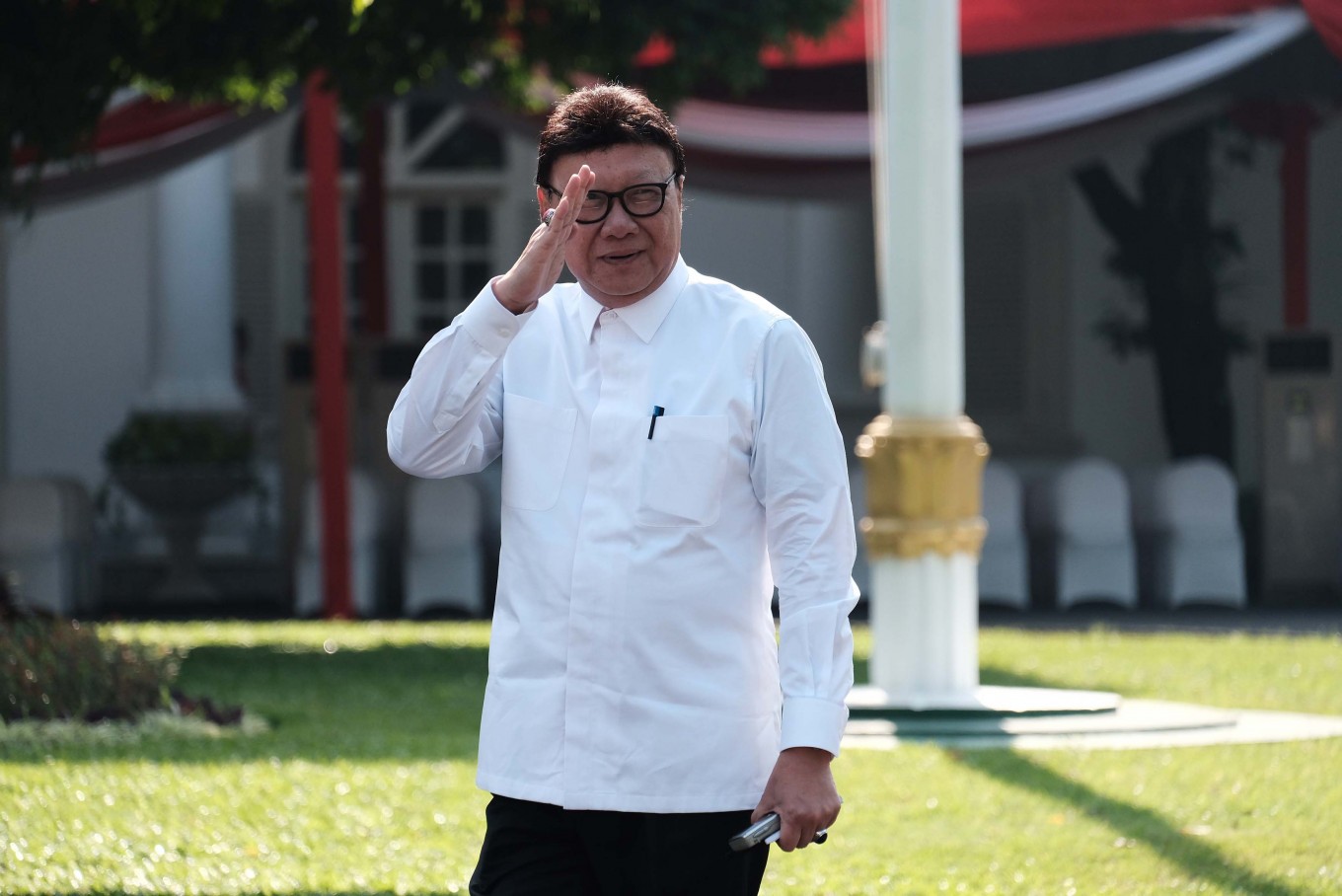 Administrative and Bureaucratic Reform Minister Tjahjo Kumolo said Monday that the ministry had selected 13 more government agencies that could be disbanded. Tjahjo said there were a lot of agencies, commissions and institutions that had overlapping responsibilities and were thus not entirely productive.

Moreover, Tjahjo also suggested disbanding several government agencies that were established through the issuance of a law. However, Tjahjo added, it would take more time as it required further coordination with the House of Representatives.

President Joko “Jokowi” Widodo disbanded 18 government agencies last month through the issuance of Presidential Regulation (Perpres) No. 82/2020 as part of his commitment to simplify the bureaucracy.

The House of Representatives is pressing ahead with its deliberation of the contentious job creation omnibus bill despite the submission of a legal notice from activists and organizations to halt the process. Lawmakers said they appreciated the notice and acknowledged it as part of the country’s democratic process. However, they will proceed with the deliberation as they deemed the issuance of the bill an urgent matter to cushion the economic impacts of the COVID-19 outbreak.

The government’s decision to allow more schools to reopen has drawn strong criticism from pediatricians and teachers who have been calling for schools to stay focused on distance learning to prevent children from contracting COVID-19.

Despite daily increases of infections in Indonesia, the government expanded on Friday a school-reopening policy for schools in COVID-19 yellow zones, or moderate-risk areas. The decision comes only a month after schools in green zones, or low-risk areas, were given the green light to reopen.

The Federation of Indonesian Teachers Associations (FSGI) said the change risked creating new infection clusters at schools. The group has received reports of at least 180 teachers and students from across the nation who have tested positive for the virus.

The FSGI said that while it was true that there were many limitations and technical problems hindering distance learning, reopening schools was not the answer.

Education and Culture Minister Nadiem Makarim has repeatedly said that the decision to reopen is optional and that schools and parents have discretion to decide what is best. But critics say the policy could see parents sending their children back to school prematurely without taking the proper safety measures.

House of Representatives Commission III member Arsul Sani said that the presidential regulation (Perpres) on the involvement of military forces to strengthen Indonesia's fight against terrorism was to follow up Article 43 of Law No. 5/2018 on terrorism, which stipulates that the Indonesian Military (TNI) may be deployed in combating acts of terrorism.

Despite wide criticism against the move, Arsul said he did not question the issuance of the Perpres. Arsul said it was more important to focus on how the regulation would affect the TNI’s stance and role in its involvement in the country’s fight against terrorism.

Arsul added that the House would review further the draft of the regulation, which was submitted on May 4 to the House to be ratified.

Erick said Jokowi had appointed Andika to assist him because the President thought the Indonesian Military (TNI) should be involved in handling the pandemic. The military would work to discipline the public in adhering to the strict health protocol, he added.

The minister added the TNI would also help ensure the vaccination process once a coronavirus vaccine was ready for mass production.

Govt to rework $37b stimulus
The Jakarta Post, headline

The government is looking to disburse Rp 534.98 trillion (US$37.04 billion) in COVID-19 stimulus funding in the remaining months of the year, through proposed new programs and streamlined bureaucracy in an attempt to rescue the pandemic-hit economy.

The new stimulus programs range from a continuation of existing programs such as fund placement in banks, electricity discounts and the Family Hope program, as well as new programs intended to spur economic growth and boost people’s purchasing power, according to Finance Minister Sri Mulyani Indrawati on Monday.

The new proposed stimulus programs, totaling Rp 126.2 trillion, will be financed from reserves and budget reallocations from the government’s COVID-19 stimulus package of Rp 695.2 trillion.

“We will redesign the stimulus to maximize its impact and to allow the economy to recover faster, while also simplifying the bureaucratic process,” she told reporters on Monday.

“The government would also redesign [the program] if the designed program does not improve in the implementation and faces obstacles because of several reasons,” she said during a virtual press conference on Monday.

Sri Mulyani explained that the total budget of Rp 695.2 trillion for COVID-19 and PEN program comes from the budget execution lists (DIPA), which is currently available for Rp 313.2 trillion. The DIPA for Rp 226.1 trillion is not available yet. Meanwhile, the remaining Rp 155.9 trillion is for tax incentives that are allocated in the budget without DIPA.

The prospect for state revenue amid the pandemic and threat of recession remains bleak. State revenue has fallen 9.8 percent year-on-year (yoy) to Rp 811.2 trillion (US$55.33 billion) in the first half, equal to only 47.7 percent of Rp 1.7 quadrillion targeted in the state budget.

Tax revenue, as the main source of state revenue, declined by more than 10 percent for all tax types. Income tax (PPh) fell by 12.49 percent, value added tax (PPN) and luxury tax (PPnBM) fell by 10.68 percent, while land and building tax (PBB) combined with other taxes fell by 18.89 percent. In total, tax revenue in the first half only reached Rp 531.71 trillion, falling 12.01 percent from last year and equal to only 44.35 percent of the Rp 1.2 quadrillion targeted in the state budget.

The wide gap between state revenue and expenditure allocation will increase the deficit in the state budget. However, it remains a necessary measure as the stimulus could potentially accelerate economic recovery.

Bankruptcy is still looming over issuers in the stock market, with property developer PT Sentul City (BKSL) being the latest to face a bankruptcy lawsuit. The bankruptcy lawsuit filed by the Bintoro family of the Olympic Group and is related to the sale and purchase agreement of ready-to-build land between the two parties. However, Afflan Munjani of Sentul City corporate communications insisted that the company was not bankrupt.

The lawsuit adds to the long list of issuers threatened by bankruptcy or having to go through debt restructuring as some businesses during the COVID-19 pandemic. Three issuers are facing bankruptcy lawsuits, including PT Golden Plantation, which could potentially face forced delisting as its subsidiaries declared bankruptcy last year. Furthermore, eight issuers are in the process of postponement of debt payment obligations (PKPU), five of which have had their stocks suspended for trading by the Indonesia Stock Exchange (IDX).

However, Avere Investama director Teguh Hidayat said investors do not have to panic in responding to the lawsuit because there is a possibility that the company is not guilty, such as in the case of media conglomerate PT Global Mediacom, which is facing a bankruptcy lawsuit filed by South Korean telecommunication company KT Corporation. Instead, he said investors should focus on the amounts stated in the lawsuit compared to the company’s assets. If the company is declared bankrupt, Teguh said the investors must cut losses.

Handy ensured that AP I had developed a number of airports planned to become super-hubs. For example, Sultan Hasanuddin Airport in Makassar, South Sulawesi has become an air transportation gate to East Indonesia. Kulon Progo Airport or Yogyakarta International Airport has 583 hectares of land and is ready to accommodate 8.8 million passengers per year. I Gusti Ngurah Rai Airport in Bali, a frontrunner to become a super-hub, has the potential to accommodate 24 million passengers per year.

President Joko “Jokowi” Widodo called for improvements in the air transportation and tourist sector because the two sectors had sub-par performance in the second quarter this year. Jokowi said there were too many international airports underperforming. He wanted the ministries to immediately determine potential locations for international hubs, with functions assigned appropriately to their geographical positions and regional characteristics.