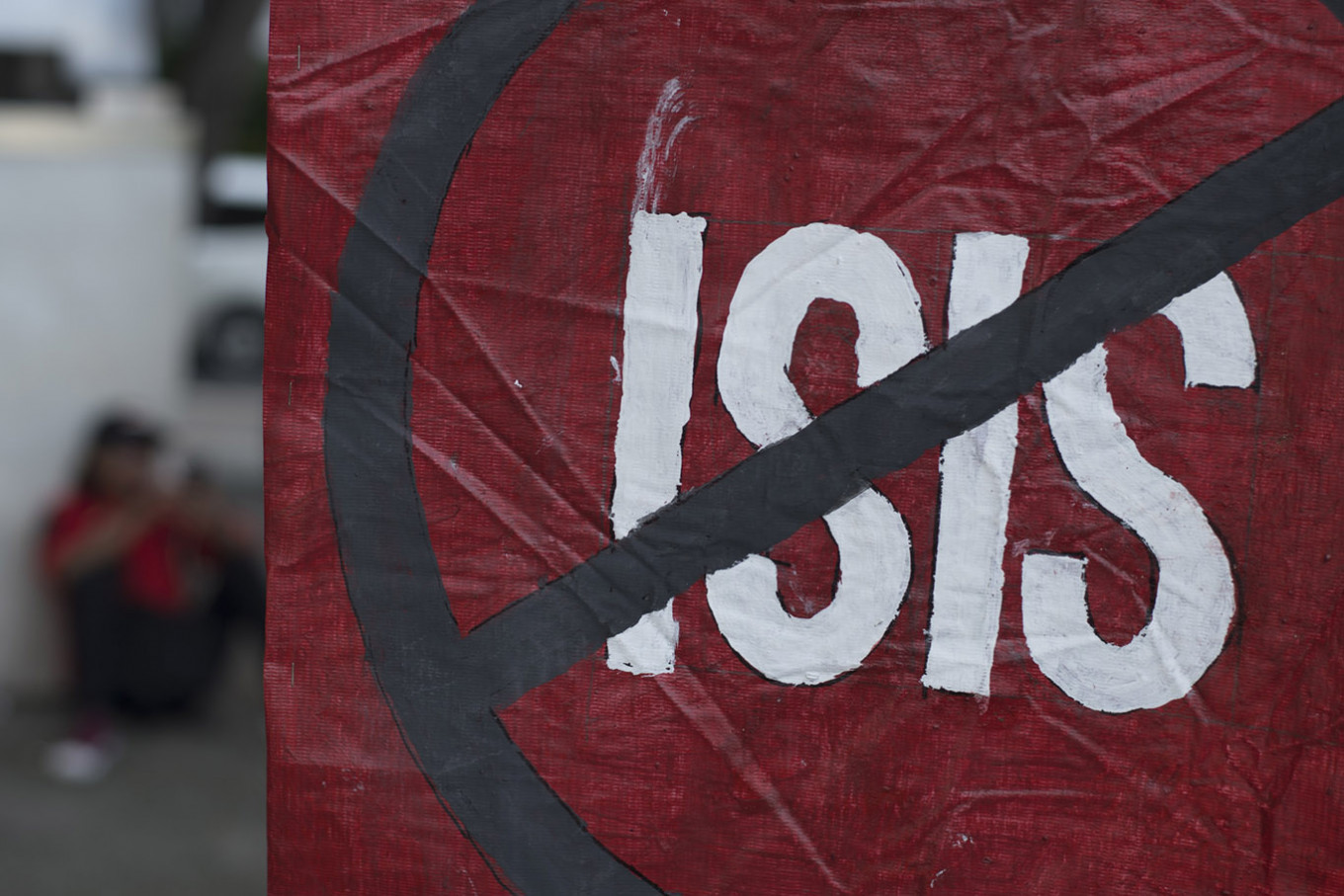 People involved in the Bhinneka Jaya Volunteer Line display posters in front of the Merdeka Palace in Jakarta on Monday to reject proposals to allow more than 600 Indonesian citizens who joined the Islamic State movement in the Middle East to return to Indonesia. (Antara/Wahyu Putro A)

Moeldoko stated that, as stipulated in the Citizenship Law, an Indonesian national could have his/her citizenship revoked upon his/her own will, and in this case, the burning of their Indonesian passports by IS sympathizers is perceived as an indicator of willingness to renounce their citizenship. Based on the law, Moeldoko asserted, their citizenship could be revoked automatically without trial.

Meanwhile, Moeldoko added that the government would verify those who had left the country for IS but still hold Indonesian passports. The results of the verification would then determine their citizenship status.

Following reports about a Chinese tourist who has tested positive for the novel coronavirus disease after his visit to Bali late last month, Bali health office affirmed that there were no tourists infected with the disease in Bali. The head of the Bali Health Agency, I Ketut Suarjaya, said his office was inspecting the locations that the infected Chinese tourist had visited during his stay in Bali.

“We’re conducting contact tracking. We’re checking where he went to when he was in Bali,” said Suarjaya.

National Intelligence Agency (BIN) chief Budi Gunawan said the intelligence body would not take part in an ongoing search for Harun Masiku, an Indonesian Democratic Party of Struggle (PDI-P) cadre who is being hunted down by police for allegedly bribing former General Elections Commissions (KPU) commissioner Wahyu Setiawan. Since he was named a suspect on Jan. 8, Harun has been at large.

Budi said he would let the Corruption Eradication Commission (KPK) fully bear the task of locating Harun. “It’s [locating Harun] within the scope of legal procedures. The KPK has the authority and capacity to do that,” said Budi.

Budi’s statement came after Democratic Party deputy secretary-general Andi Arif had urged the KPK to ask for BIN’s assistance in locating Harun. In his suggestion, Andi mentioned Budi’s alleged close ties with the PDI-P, alluding to the intelligence chief’s status as a former aide of PDI-P chairwoman Megawati Soekarnoputri.

The government is mulling over incentives for the tourism and airline industries to mitigate potential losses of US$2.8 billion from the coronavirus outbreak, which had already led to a decline in tourist arrivals. The Indonesian Hotel and Restaurant Association (PHRI) reported 40,000 room cancellations and 20,000 visitor cancellations in Bali since the rise of infections in early January.

Airlines have temporarily halted dozens of flights per week to and from mainland China in adhering to the government’s travel ban on all visitors from China, including all travelers who had been there within 14 days prior to arriving in Indonesia. Flag carrier Garuda Indonesia has halted 40 weekly flights to mainland China, while Lion Air Group has halted 30 weekly flights to China.

The tourism, transportation and finance ministries were finalizing the proposed incentives on Wednesday after meeting with industry stakeholders. The incentives under consideration include reduced tax, lower airport fees and an eased slot permit for airlines, as well as a travel discount for partnerships with all travel agents in the country.

The government and the House of Representatives have agreed to form a special committee on amendments to Law No. 4/2009 concerning coal and mineral mining. The decision to form the committee was announced by Commission VII head Sugeng Suparwoto. “There are 703 issues in the problem inventory list that need to be discussed,” Sugeng explained. The first committee meeting will begin on Monday next week.

State-owned oil company Pertamina plans to issue a US dollar-denominated global bond worth US$10 billion. The plan received a rating of BBB from Fitch Ratings, the same rank as government bonds issued by the Indonesian government in accordance with Fitch's criteria for government-related entities (GREs).

Home-grown ride-hailing company Gojek has announced that it has changed its strategy from cash burning to developing long-term business models. "In the past three to four months, there are some start-ups that have rapidly shifted their business strategy away from cash burning. However, our company has done that since 2018," Gojek cofounder Kevin Aluwi said on Feb. 11. The shift in business strategy has been pursued by OVO, Tokopedia and Bukalapak. Institute for Development of Economics and Finance economist Bhima Yudhistira hypothesized that Indonesia’s unicorns were shifting their business strategy due to growing pressure from investors to create a profit.