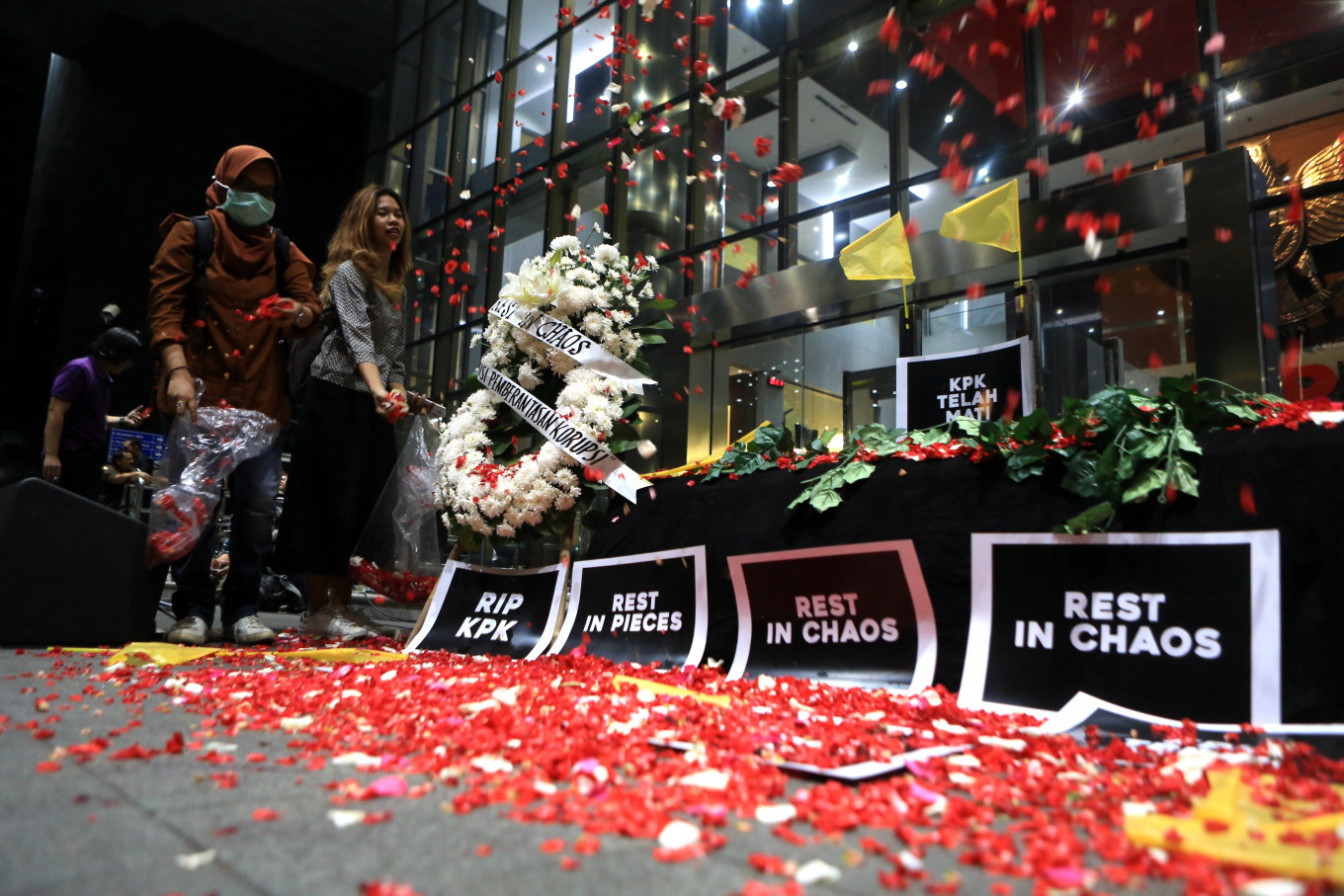 Employees at the Corruption Eradication Commission (KPK) lay flower and wreaths on top of a casket in front of the KPK's headquarter in Kuningan, Central Jakarta, on Sept. 13. Thursday marks the day when the controversial revision to the Corruption Eradication Commission (KPK) Law officially comes into effect, raising the question as to what will happen to the country’s leading corruption-fighting agency under the new legislation.(JP/Seto Wardhana)

“The composition of the new Cabinet has been finalized. I will announce it soon after the presidential inauguration on Oct. 20. The announcement might be made on the same day or the day after,” said Jokowi on his official Instagram account.

The East Kalimantan Police arrested four people after the brawl on Oct. 9 in which one person was killed and another was injured. In addition to the legal process, the people involved the riot want to enforce customary fines against the alleged perpetrators, based on the customary law of their ethnic group, leading to a riot.

In a bid to calm the protesters, North Penajam Paser Police chief Adj. Sr. Comr. Sabil Umar and Paser Police chief Adj. Sr. Comr. Roy Satya Putra came and negotiated with the angered group. The authorities offered to hold an open discussion at the North Penajam Paser regency administration office, but the group turned down the offer and burned ticket counters for klotok (traditional wooden boat) and speedboats at Penajam Ferry Port and hundreds of wooden houses around the port instead.
Police officers carrying firearms during student demonstrations appear at hearing
Detik.com, https://tinyurl.com/y4yj5bvu, Kompas.com, https://tinyurl.com/y6ogcveu
Five out of six police officers attended a disciplinary hearing on Thursday for allegedly violating the police’s standard operating procedure on patrolling student demonstrations in front of the North Sulawesi Legislative Council (DPRD) on Sept. 26, during which two university students were found dead with gunshot wounds and blunt injuries. The officers had reportedly brought firearms with them while patrolling the demonstrations despite National Police chief Gen. Tito Karnavian prohibiting them from doing so.

The five officers, identified as GM, MI, MA, H and E, are from the North Sulawesi Police’s criminal investigation and intelligence division. Meanwhile, the sixth officer, DK, has yet to to be called in for a hearing as he is from a different division.

In the hearing, it was found that the five police officers had not attended a police ceremony, during which Tito’s ban on firearms was announced. Three out of the five officers also reportedly fired one to two warning shots into the air during the protest.
BUSINESS AND ECONOMICS NEWS AND HEADLINES
Provincial minimum wage to rise 8.51 percent in 2020
Bisnis Indonesia, https://tinyurl.com/y4tng5ea; CNBC Indonesia, https://tinyurl.com/yxpmm4ee
The Manpower Ministry issued a circular on Oct. 15 raising the provincial minimum wage (UMP) by 8.51 percent in 2020, higher than this year’s increase of 8.03 percent. The calculation is based on the national inflation rate recorded at 3.39 percent and economic growth at 5.12 percent in line with Government Regulation (PP) No. 78/2015, which labor unions oppose. The Indonesian Workers Union Association (Aspek) and the Confederation of Indonesian Trade Unions (KSPI) had demanded an increase of 18 to 20 percent for this year.

85 economists reject revision of KPK Law in open letter
Bisnis Indonesia, https://tinyurl.com/y292ekqs; Bisnis Indonesia, https://tinyurl.com/y3p2kgq9; Tempo, https://tinyurl.com/y596ymrv
Economists have voiced concern over the controversial revision of the Corruption Eradication Commission (KPK) Law through an open letter sent to President Joko “Jokowi” Widodo. The economists consider the revised law worse than the previous one, arguing that it would weaken corruption prosecution and jeopardize the effectiveness of corruption prevention. The signatories of the letter note that corruption causes a suboptimal and inefficient allocation of resources. The letter was signed by Indonesian economists from reputable universities and institutions in the country, as well as from abroad.


Indonesia tries to outdo Vietnam in luring foreign investment
CNBC Indonesia https://tinyurl.com/yy65h7lc; CNBC Indonesia, https://tinyurl.com/yyrxdsyv; CNBC Indonesia https://tinyurl.com/y4uqaq5x
Following a presentation delivered by a World Bank representative in September – reporting to President Joko “Jokowi” Widodo that Indonesia had fallen behind Vietnam and several other Southeast Asian countries in luring foreign investors – Jokowi has held meetings every week to find ways to improve the country’s competitiveness in attracting more funds from abroad. According to the meetings, President Jokowi will focus on human capital development to improve labor productivity as well as on simplifying business licensing procedures, as reflected in the ease of doing business indicator, in his second term. Vietnam only requires two documents for anyone to start a business: investment approval and business registration.