AI to take over government jobs 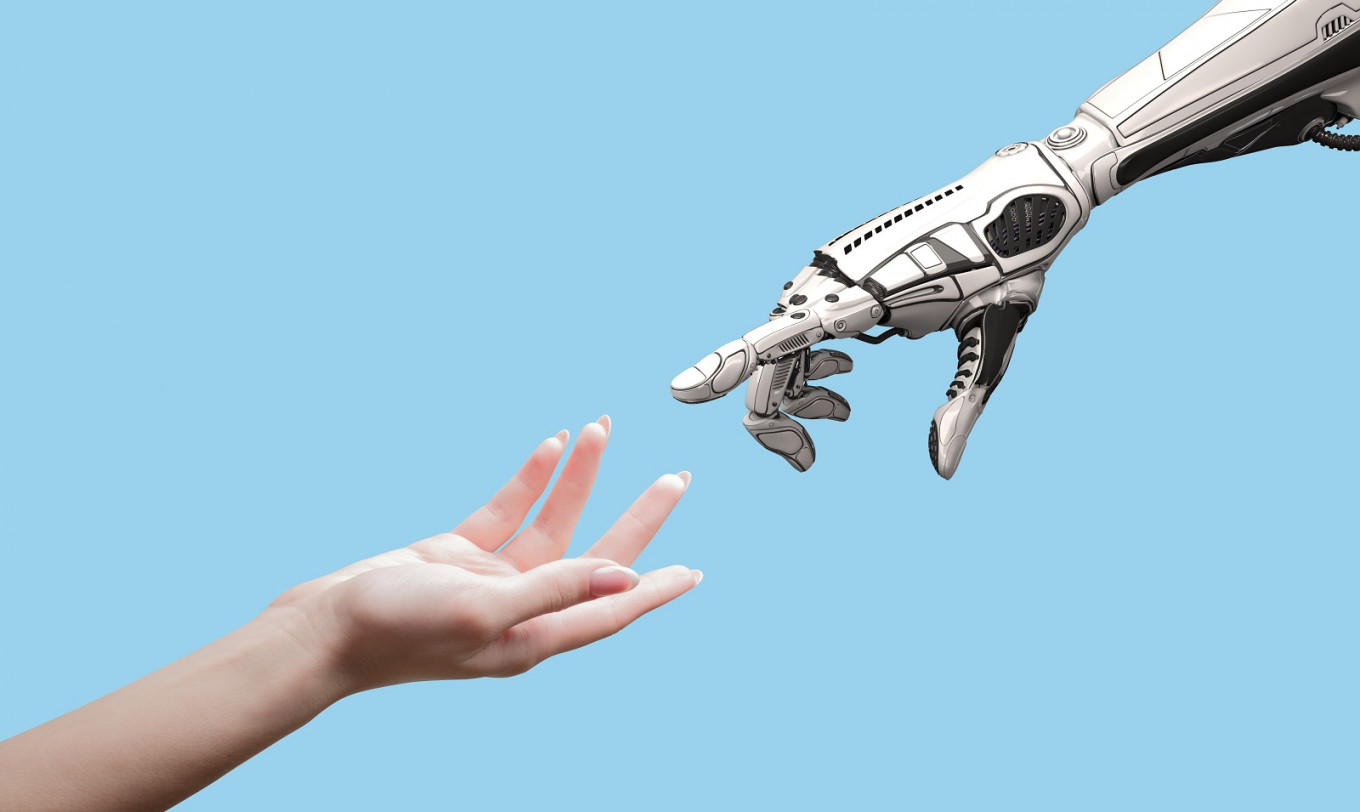 AI to take over government jobs
The Jakarta Post, headline

As president Joko "Jokowi" Widodo prepares to replace government jobs with artificial intelligence (AI) to cut red tape amid a big push for investment and bureaucratic reform, observers have raised concerns about the availability of reliable and secure public data.

Jokowi said on Thursday the government would replace echelon III and IV officials with AI to speed up the goverment's work. The legal umbrella for such a plan would be put forward as part of an omnibus bill that would eliminate inefficient regulations and bureaucracy.

"I have instructed ministers to replace echelon III and IV officials with AI [because] our bureaucracy will be faster with AI, but it will depend on the omnibus bill," the Presideny told business leaders attending the Kompas100 CEO Forum in Jakarta.

The omnibus bill, which would synchronize more than 70 overlapping laws and regulations deemed as unfavorable for investors, is expected to turn to Indonesia into a more attractive investment destination as the government pushes efforts to boost sluggish economic growth.

Three advisers to the Corruption Eradication Commission (KPK) have confirmed their resignation, as a consequence of the enforcement of Law No. 19/2019, which removes the posts of advisory council members. These roles have been taken over by the Supervisory Council (Dewas).

The Law and Human Rights Ministry has insisted on reviewing a number of articles in the draft Criminal Code (RKUHP) that have sparked public rejection, but the House of Representatives resists.

The wrangling surfaced in the inaugural meeting between the House Commission III overseeing law and legislation, human rights and security affairs and the ministry officials on Thursday.

Law and Human Rights Minister Yasonna Laoly said there were some articles in the draft law that needed reviewing, even though they had been approved in the deliberation during the previous legislative term. The House plenary delayed passing the draft law upon request of the government due to widespread public opposition to the draft.

As of Thursday no deal has been struck between the government and the lawmakers. Although the government has requested that the problematic articles be reviewed, House Commission III has optioned to limit the room for improvement of the article so that the subject matter will not have to change.

The zoning system is stipulated in Education and Culture Ministerial Regulation No. 20/2019 regarding admission of students, ranging from kindergarten to senior high school.

According to the regulation, students can enrol based on the zoning system, academic achievement and movement of their parents or guardians. The zoning requires schools to allocate 80 percent of seats for students living within its area, 15 percent for achievers and the remaining 5 percent to students who have to follow their parents’ relocation.

Doni warned that admission based on students’ achievement was prone to manipulation of applicants’ passing grade.

Ahead of the Golkar Party national congress on Dec. 3, three new contenders for the party's top post have entered the race. They face two candidates who have been competing fiercely from the contest's outset: Bambang Soesatyo and Airlangga Hartarto.

Indra Bambang Utoyo, Ridwan Hisjam and Agun Gunanjar announced their candidacy after Bambang's supporters recently threatened to hold a separate national congress. A similar rift emerged in 2014 when the nation's second-largest party held two separate congresses - one in Jakarta and one in Bali - to elect its chairman following a fierce battle between candidates Aburizal Bakrie and Agung Laksono.

"This is a reminder for Airlangga's supporters that history should not repeat itself," the Golkar deputy secretary-general said on Monday.

Of the three new candidates, Indra was the first to declare his bid. The former lawmaker and senior member of Golkar said he was worried that the Bambang-Airlangga rivalry could exacerbate an internal division within the party, which could affect votes in future elections.

State-owned oil and gas company PT Pertamina has increased its profit target by 10 percent to US$2.2 billion in 2020 from $2 billion this year thanks to the expected increase in oil and gas production.

The company’s president director Nicke Widyawati said Pertamina would spend at least US$3.7 billion, or about 60 percent of total expenditure next year, on financing oil and gas exploration and production activities.

"The allocation for upstream activities is very high due to the development of the new gas wells in the Mahakam block. As the decline rate of the gas production in the block is high, reaching  25 percent, we must drill 122 new wells,” she said in a hearing with House of Representatives Commission VII on Thursday.

However, Pertamina expects total revenue to slightly decline to $58.33 billion from $58.85 billion this year due to the drop in the Indonesia Crude Price (ICP) assumption in the 2020 state budget to $63 per barrel from $70 per barrel this year.

Lippo Group has sold 70 percent of its stake in digital financial services firm Visionet International (OVO) amid the growing competition in the country’s digital payment business.

Lippo Group founder Mochtar Riady said the reason for the sale of its OVO shares was because it was unable to keep burning money by giving free services, discounts and cash back to its customers.

Earlier this year, rumors circulated that Lippo Group would sell its stake in OVO as the company could no longer inject more funds into the fintech firm. Lippo Group had to spend Rp 700 billion (US$50 million) on OVO per month.

Multipolar president director and Lippo Group director Adrian Suherman said in an official statement on Thursday that they needed partners in fulfilling OVO’s vision and mission in developing financial technology in the e-money sector.

Adrian emphasized that the company was highly committed to supporting OVO growth and development as an Indonesian digital payment company.

Indonesia booked business transactions worth about US$20.38 million, equal to Rp 287.38 billion, during a business matching event in Busan, South Korea on Wednesday.

The event was a business activity held during Trade Minister Agus Suparmanto’s visit to South Korea from Nov. 25 to 27.

Prior to the business matching, Minister Agus also encouraged Indonesian and South Korean businessmen to make the most of the Indonesia-South Korea Comprehensive Economic Partnership Agreement (CEPA), which would be signed early next year after years of negotiations.

Based on Investment Coordinating Board (BKPM) data, trade value between the two countries reached US$18.62 billion in 2018. Indonesia’s export amounted to $9.54 billion and import totaled $9.08 billion, giving Indonesia a trade surplus of $460 million during the year.

Businesses are working hand-in-hand with local farmers in capacity-building programs to promote good agricultural practices in a bid to ensure sustainability in the production of various commodities ranging from palm oil and coffee to cacao and spices.

The Sustainable Trade Initiative Indonesia (IDH) has been working with companies, including French tire manufacturer Michelin and agribusiness company Wilmar, to train producers of rubber and palm oil, among other commodities, to adopt good agricultural practices.

In bridging the gap between the corporate and farmers’ needs, the IDH offers practical solutions that will allow companies, the government and other parties in public-private partnerships to finance and create sustainable agricultural projects.

The cofinancing projects are not only useful for the farmers, who are mostly smallholders, but also provide benefits for the companies, said the foundation’s Indonesia country director, Fitrian Ardiansyah.

“They [the projects] can increase farmers’ productivity, which will support [the companies’] supply chain. The cooperation with farmers will also increase their mutual trust and simultaneously reduce the risk of social conflict,” he wrote in an email correspondence with The Jakarta Post on Nov. 22.
Download PDF