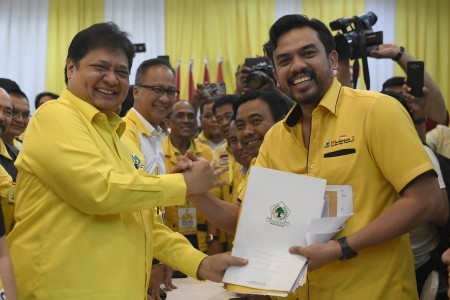 With the two leading candidates for the Golkar Party's top posts primed to duke it out at the party's national congress on Tuesday, incumbent Airlangga Hartarto seems to have gained the upper hand over his main challenger Bambang Soesatyo.

Airlangga, who is also the coordinating economic minister in President Joko “Jokowi” Widodo’s second-term Cabinet, has claimed to have secured 90 percent support, equal to 514 of the 559 votes in the congress. For the past few days, he has been visiting various regions to gather support, with candidates required to obtain written statements of support from 30 percent of the party's regency and provincial-level branches.

He also held a meeting with Regional Representatives Council leaders and several senior party figures on Monday evening, including Aburizal Bakrie, Agung Laksono, Akbar Tandjung and former vice president Jusuf Kalla, as well as a fellow minister in Jokowi’s Cabinet, Luhut Pandjaitan, which observers say is another sign that an Airlangga win is all but assured.

For his part, Bambang reiterated on Monday that whatever happened, the party would remain committed to "supporting the Jokowi-Ma'ruf Amin government."Despite Airlangga's seemingly insurmountable lead, Bambang said he remained optimistic."I believe more in fate," he said. "Whatever anyone does, if fate says differently, nothing can stop it."

President Joko “Jokowi” Widodo has asserted the government’s impartiality in the internal affairs of the Golkar Party, saying he and his ministries have nothing to do with the party’s congress, which he is slated to open on Tuesday. Jokowi said on Monday it was impossible for Golkar, which is a major party, to succumb to outside intervention.

Supporters of an aspirant for Golkar chief job, Bambang Soesatyo, have accused some Cabinet members of having their hands in the party’s chairmanship race. One of Bambang’s supporters, Syamsul Rizal, said State Secretary Pratikno had pressured Golkar regional representatives into supporting the incumbent Airlangga Hartarto, who is also the coordinating economic minister.

“[Pratikno] must be powerful if he could interfere in Golkar. What could a state secretary do with Golkar’s congress?” Jokowi said, responding to the accusation.

Pratikno said reports that he had gathered Golkar’s regional executives were unsubstantiated.

Mahfud’s remarks have again reopened the possibility for Jokowi to “save” the antigraft body, which many said had lost its power because of the controversial revision of the law. However, despite Mahfud’s statement, the selection of the KPK’s supervisory council, which is part of enforcement of the new KPK Law, goes ahead.

President Jokowi said an internal team from the State Secretariat was responsible for the selection process. “It has yet to be finalized. We will definitely pick those with good track records and integrity,” said Jokowi.

President Joko “Jokowi” Widodo expressed wrath and disappointment over a plan to amend the 1945 Constitution for the fifth time. He said he opposed the amendments and urged people to focus more on developing the country.

“I think those who want to extend the presidential tenure to three terms of office [from the current two] are trying to slap me in my face. They only try to win public attention or cheat me,” Jokowi said on Monday.

“It will be better if there is no amendment,” said Jokowi.


212 rally goers back away from Prabowo, turn to Anies
The Jakarta Post, p.1

Standing out from a crowd of people who were mostly wearing white, Jakarta Governor Anies Baswedan took centerstage while wearing his khaki-colored civil servant uniform during the “reunion” of hard-line Muslims who call themselves the “212 alumni” on Monday.

At the event, held at the National Monument (Monas) square in Central Jakarta, Anies seemed to be presenting himself as the new hope of the 212 movement after Prabowo Subianto, a 2014 and 2019 presidential candidate, joined President Joko “Jokowi” Widodo’s Cabinet as defense minister. Anies, however, claimed he was there only to celebrate Prophet Muhammad’s birthday, which fell on Nov. 9 this year, and that as the governor, he wanted to ensure that Monas was for “everyone”.

Sirojudin Abbas, program director for Saiful Mujani Research and Consulting, said Anies had long been linked to the 212 rally as the group's main goal had been to ensure Ahok’s defeat. As reunion participants came from various Islamic groups across the country, maintaining a good relationship with them would be politically beneficial for Anies, he added.

Syarif Hidayatullah State Islamic University political analyst Adi Prayitno expressed a similar opinion, saying that aside from Anies' status as Jakarta governor, his presence at the rally was a way to stay on good terms with the 212 alumni as they had contributed to his gubernatorial win.
BUSINESS AND ECONOMICS NEWS AND HEADLINES
Erick to further restructure SOEs but drops ‘super holding’ plan
Bisnis Indonesia, headline, Investor Daily, headline, Kontan, p.18

During a hearing with Commission VI of the House of Representatives on Monday, State-Owned Enterprises (SOEs) Minister Erick Thohir reiterated his plan to continue to restructure the country’s state enterprises.

Erick, however, said that he would drop his predecessor’s plan to establish a super holding company that would oversee all state enterprises. Eric said he would instead create a sub-holding company in each business sector.

Erick said SOE subsidiaries should be based on their business activities. For example, PT Gapura Angkasa, PT Garuda Indonesia’s subsidiary for airport handling services, should be managed by PT Angkasa Pura I and II instead.

He also proposed the revision of Government Regulation No. 41/2003, by which SOEs are owned by the Finance Ministry. The regulation, according to Eric, often hampered the merger of state firms because it requires the approval of the finance minister.

Speaking at the Bank Indonesia (BI) annual meeting on the evening of Nov. 28, President Joko "Jokowi" Widodo said that his priority was to unleash a structural reform agenda beyond the fiscal, financial and monetary sectors to ensure the effective achievement of the government's economic goals.

Jokowi said infrastructure development would remain one of his signature policies in his second and final term. He added that one of the government’s immediate priorities was to seek ways to improve Indonesia’s trade balance and current account, such as the development of import-substitution and export-oriented industries.

The government was also working to improve the country's investment climate as it prepared to introduce an omnibus bill on job creation, which would effectively remove barriers to investment identified in 74 existing laws.

Meanwhile, the BI governor called for greater synergy between fiscal and monetary authorities, noting that the monetary policy “should not be the only game in town” amid an increasingly gloomy global outlook.

Monthly inflation rose slightly in November to 0.14 percent from 0.02 percent in the previous month, driven by an increase in food prices, Statistics Indonesia (BPS) reported on Monday.

With monthly inflation of 0.14 percent in November, inflation rose by 3 percent year-on-year (yoy) in the month, within the central bank’s targeted range of between 2.5 percent and 4.5 percent for 2019. Meanwhile, the inflation rate rose by 2.37 percent year-to-date.

BPS head Suhariyanto said the November inflation was driven primarily by price hikes in food commodities, which increased 0.37 percent and contributed 0.07 percent to the headline inflation.

Shallots, red onions, tomatoes, chicken meat and eggs were among the commodities that drove November’s inflation, while deflationary pressures were also recorded in the prices for red chillies, fresh fish and bird’s eye chillies.

Nationwide, of the 82 cities overseen by BPS, 57 recorded inflation and the other 25 experienced deflation.

The government has apparently decided that it would not provide any capital injection to the financially ailing stated-owned PT Asuransi Jiwasraya.

The government will allocate Rp 18.7 trillion (US$1.32 billion) in the 2020 state budget for capital injections for state enterprises. However, Asuransi Jiwasraya was not included on the list of companies to receive one.

One of the schemes to save Jiwasraya, Isa said, would be to establish a subsidiary called Jiwasraya Putra, which would be expected to generate Rp 5 trillion in funds to cope with Jiwasraya's liquidity problem.

SOEs Minister Erick Thohir said he was optimistic that there would be local and foreign investors who would want to invest in Jiwasraya Putra.

Gold sales in Indonesia have increased sharply this year as many people still believe that bullion remains a safe haven in times of financial or political uncertainty.

“We are seeing a rise in public awareness of gold as a safe haven, as we recorded significant sales growth this year,” he said, adding that the company had sold 31 tons of gold year-to-date, up 19 percent from the 26 tons of gold sold in 2018.

“Exports account for 60 percent of the total gold sold this year as it gave us more profits due to better prices abroad,” said Iwan, adding that the domestic buyers were mostly retail investors while gold exporters were mainly businesses.

He said he expected the company would sell about 35 tons of gold next year, citing the increase in public awareness, which could potentially boost sales.
Download PDF