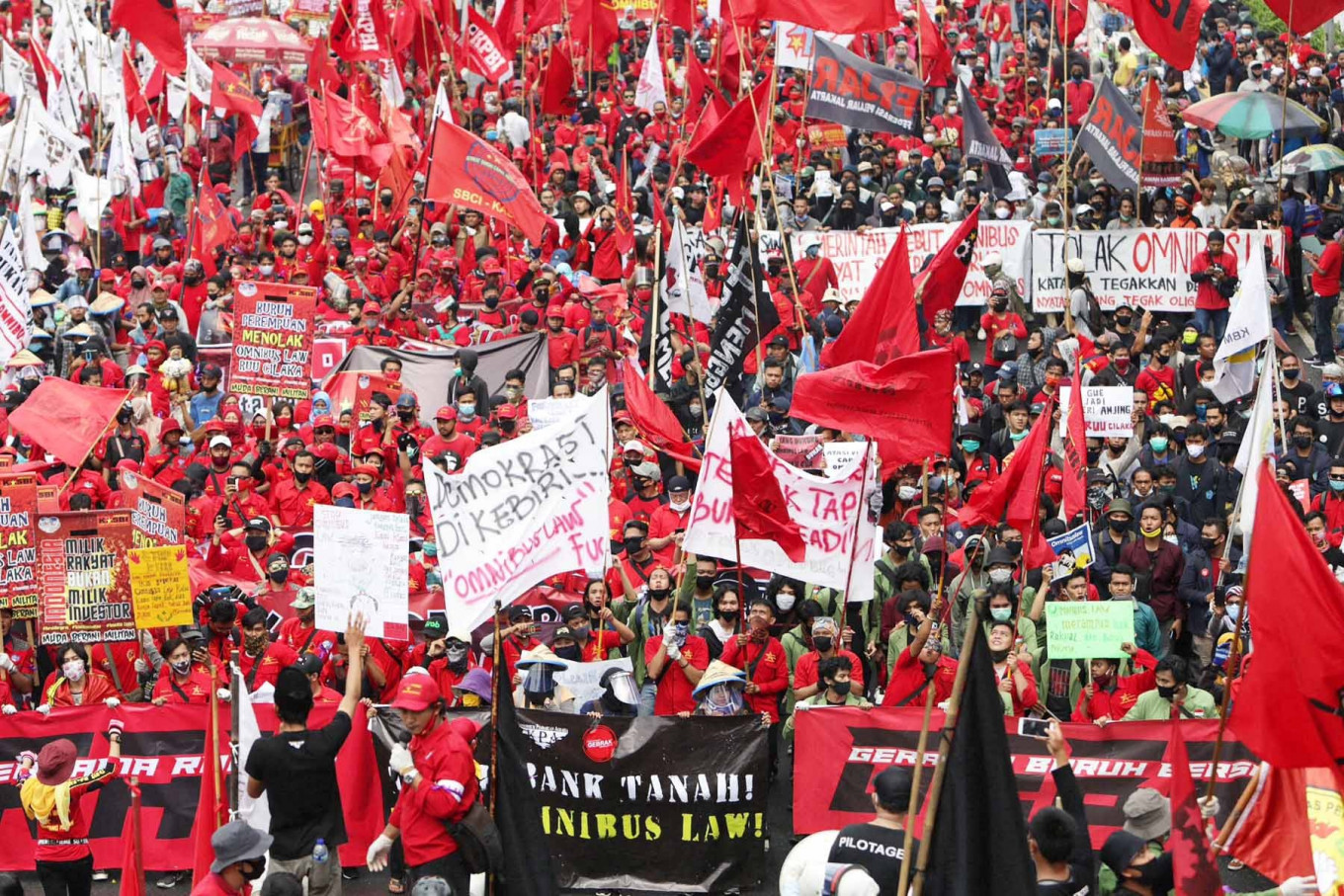 Thousands of people join a protest on July 16, 2020 at the House of Representatives in Jakarta to urge lawmakers to stop deliberating the omnibus bill on job creation. (JP/Wendra Ajistyatama)

Amnesty International Indonesia has lambasted the newly passed Omnibus Law on Job Creation, calling it a threat to human rights that could harm labor rights and exploit workers in the country.

He said that the new law might also breach the prohibition of retrogression principle in the International Covenant on Economic, Social and Cultural Rights (ICESCR), especially because the law’s unclear provisions on minimum wage and working hours did not meet ICESCR requirements.

An online petition to "Reject the omnibus law on job creation and [lodge] a motion of no confidence in President [Joko Widodo] and the House” has been launched on change.org to demand the resignation of the President and House Speaker Puan Maharani for failing the aspirations of the Indonesian people. The petition had garnered more than 24,000 signatures out of its 25,000 targets at the time of publishing.

People’s Consultative Assembly Deputy Speaker Syarief Hasan of the Democratic Party has questioned the House of Representatives leaders’ decision to reschedule their plenary session to Monday, during which they passed the controversial omnibus bill on job creation into law, from its initial schedule on Thursday.

Syarief said that the House’s decision to expedite its plenary session could set a bad precedent for the legislative body itself, especially considering the mounting resistance from labor unions, environmentalists as well as the general public.

Syarief also reasserted the party’s opposing stance against the law, which is expected to bring radical changes to the country’s labor system and natural resources management.

Luhut, who also serves as COVID-19 Response and National Economic Recovery Committee deputy chairman, said that the government had collected the data on COVID-19 drug prices based on the Free on Board (FoB) system from exporting countries such as India, China and Germany. "I ask Pak Terawan to monitor this matter closely," said Luhut.

Furthermore, Luhut also asked the Health Ministry to ensure the availability of COVID-19 drugs at least until the end of this year.

Bank Indonesia has announced that consumer confidence has weakened in the last month. According to BI’s survey, Indonesia’s consumer confidence index (IKK) fell to 83.4 points in September, from 86.9 in August. An IKK reading below 100 signifies consumer pessimism, while above 100 reflects general hopefulness. Consumers are still upbeat on the economic prospects of the next six months, but their optimism declined as indicated by falling consumer expectation index (IEK) from 118.2 to 112.6.

State-owned construction company PT Waskita Karya has paid the principal and interest of its Phase I Sustainable III bond due yesterday. The bond was issued in 2017, and the total principal and interest payments were Rp 1.43 trillion (US$96.8 million). Waskita still has another bond that will mature on Oct. 16, namely Phase II Sustainable I bond, totaling Rp 1.15 trillion. Previously, Waskita had prepared cash worth Rp 2.5 trillion to pay the matured bonds.

The Law and Human Rights Ministry is developing a web-based application called PRISMA to assess companies’ operational risks related to human rights abuses, from land affairs to deforestation and forced eviction to labor rights. PRISMA will be a voluntary self-assessment that cover 11 indicators, namely a company’s profile, human rights policy, grievance mechanism, supply chains, manpower, labor condition, labor union, discrimination, privacy, environment and social responsibility. The app is issued in partnership with the Institute for Policy Research and Advocacy (ELSAM) and business groups. The app development is taking place at a time when labor unions and advocacy groups are worried about the omnibus bill on job creation’s impact on labor rights.