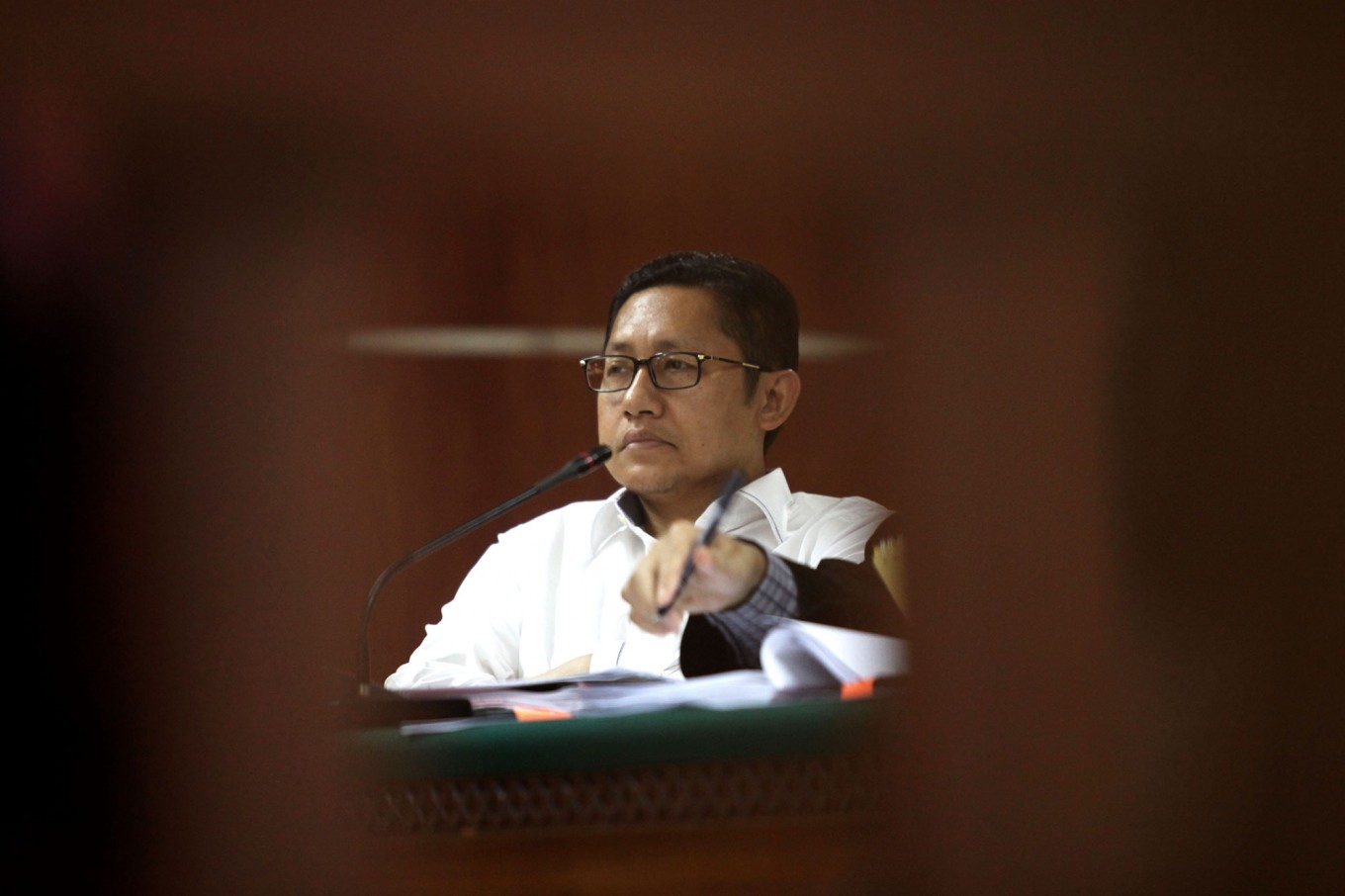 The Supreme Court has once again come under fire for undermining the antigraft movement, this time for reducing the graft sentence of former Democratic Party chairman Anas Urbaningrum in a recent case review, setting another precedent for other graft convicts to methodically seek reduced sentences.

On Wednesday, a panel of three Supreme Court justices led by Sunarto reduced Anas’ prison sentence from the initial 14 years to just eight years, according to a copy of the ruling obtained by The Jakarta Post.  The justices also demanded Anas, who served as party chief between 2010 and 2013, pay a fine of Rp 300 million (US$20,164), which, if not paid, would see him serve an extra three months’ imprisonment.

He was found guilty by the Jakarta Corruption Court in 2014 of accepting Rp 20 billion among other gratuities in relation to the construction of the Hambalang Sports Complex in Bogor, West Java, a project that also entangled other Dems officials.  Anas was sentenced to eight years in prison, but the Corruption Eradication Commission (KPK) later successfully appealed for a tougher sentence at the Supreme Court, which increased his term to 14 years.

Anas has now become the 23rd graft convict to be granted leniency by the Supreme Court in the past year.  Just a day prior to the issuance of the ruling, the KPK said 22 graft convicts had received lighter sentences after their case reviews were approved by the court between 2019 and 2020. The KPK said it had yet to receive copies of any of those rulings from the court.

Critics were quick to point out the leniency of the court’s decision, accusing it of doling out reduced sentences to graft convicts with ease. They also say the move will pose a bigger threat to Indonesia’s anticorruption efforts in the future.

Patients with comorbidities to be prioritized
Koran Tempo

The government is involving the Health Care and Social Security Agency (BPJS Kesehatan) in drawing up a priority list of COVID-19 vaccine recipients. BPJS Kesehatan spokesperson Iqbal Anas Maruf said the agency had coordinated with the national economic and COVID-19 recovery team to gather data on potential recipients of the first batches of COVID-19 vaccine. One of the groups targeted is people with comorbidities.

“We have comprehensive data pertaining to comorbidities and the location of health facilities. This will facilitate the vaccination process,” said Iqbal on Thursday. Iqbal added that BPJS Kesehatan would present data based on which prioritized recipients of COVID-19 vaccine would be selected. “Regarding the technicalities of the vaccination process and the distribution of the vaccines, they are completely under the government’s authority,” asserted Iqbal.

Meanwhile, secretary to the Coordinating Economic Minister, Susiwijono Moegiarso, said recipients of BPJS Kesehatan’s contribution assistance, which reportedly amounted to approximately 96 million people, would be included as well on the priority list. “But we will lay out further details on the criteria [for prioritized COVID-19 vaccine recipients] as we have received input, including prioritizing people with comorbidities,” explained Susiwijono.

Previously, Health Minister Terawan Agus Putranto said medical workers and frontline workers would be prioritized to receive the first batches of COVID-19 vaccine. Furthermore, those considered to be at high risk of COVID-19 infections, namely workers between the ages of 18-59, would also be prioritized. To date, the total amount of COVID-19 vaccine needed in the country is predicted to stand around 320 million doses.

Campaign behaviors have yet to change
Kompas, Headline

The first week of the 2020 regional elections’ campaign period indicates that the COVID-19 pandemic has not prompted significant changes in electoral candidates’ campaign behavior. In-person meetings are still the most used method employed by candidates’ campaign teams, despite the high risk of COVID-19 transmission during such meetings due to low compliance with health protocols.

According to the Elections Supervisory Agency’s (Bawaslu) data, there were 582 campaign activities recorded between Sept. 28 and 30 in 187 regencies/municipalities. 43 percent of these activities comprised face-to-face and limited meetings, while only 11 percent of them were online campaigns.

In-person campaign activities amid the pandemic have continued as campaign teams believe they are more effective in winning votes. In certain regions, online campaigns have proven ineffective as voters are still relatively unfamiliar with the use of smartphones and the internet.

Bawaslu official M. Afifuddin asserted that in-person campaign activities must be complemented by strict health protocols to prevent the emergence of new COVID-19 clusters throughout the campaign period. He warned, however, that there had been an increase of health protocol violations during campaign activities in the past days. Between Sept. 28 and 30, for instance, 35 violations were detected in 35 regencies/municipalities.

Three ministerial offices in Jakarta have become hotbeds of COVID-19 transmission, emerging as the largest virus clusters in the country's government and commercial hub, according to the latest official record.

Data published by the Jakarta administration shows that the Transportation Ministry had 319 confirmed cases as of Wednesday, the highest among other clusters across the capital, including government offices, private companies, traditional markets and houses of worship.

The offices of the Health Ministry and Defense Ministry recorded the second- and third-highest numbers of cases, with 262 and 147 infections to date, respectively.

The data is available on the administration’s official website for COVID-19 handling, corona.jakarta.go.id.  The Corruption Eradication Commission (KPK), the Food and Drug Monitoring Agency (BPOM) and Jamii Taman Sari mosque in West Jakarta have also recorded some of the highest numbers of COVID-19 cases, with 116, 89 and 80 cases, respectively.

Following the Saudi Arabia’s announcement of its plan to gradually re-allow Muslims from around the world to go on umrah (minor haj) starting Nov. 1, the government has been lobbying the Saudi royal family to include Indonesian Muslims among those permitted to participate.

The Religious Affairs Ministry’s director general of haj and umrah, Nizar Ali, affirmed that as of Thursday, there had yet to be any official information from Saudi Arabia regarding the possibility of Indonesian Muslims acquiring the permit to go on umrah. “We are still waiting and coordinating with our representatives stationed at the Indonesian Consulate General in Jeddah,” said Nizar.

Saudi Arabia has imposed a temporary travel ban on Muslim pilgrimages from various countries, including Indonesia, since Feb. 27 to prevent the spread of COVID-19. Airplanes departing from Indonesia have been also prohibited from landing in Saudi Arabia since March 13.

The government has extended the scope of recipients for housing mortgage and car loan interest stimulus through Finance Ministerial Regulation No. 138/2020 effective from Sept. 28.

The Finance Ministry’s macro economy and international economy expert staff, Suminto Sastrosuwito, said the regulation aimed to maintain the productivity of micro, small and medium enterprises (MSMEs) and the application process was simplified to not require any tax ID. The budget for this subsidy is part of the MSMEs component in the national economic recovery (PEN) program, with an allocation of Rp 3.7 trillion.

This stimulus has gained mixed responses. Indef executive director hopes the banking sector supports the initiative while Core economist Piter Abdullah argued that the stimulus would be better allocated for productive instead of a consumptive loan.

Domestic industry players are facing more pressure as market demand continues to slow down. The slow demand due to decreasing household purchasing power is reflected in the Consumer Price Index, which shows 0.05 percent deflation for September 2020. This is the first time Indonesia has faced several deflations in a row since 1999.

The year-to-date inflation rate per September is recorded at 0.89 percent while the year-on- year rate is 1.42 percent.

On the production side, the Purchasing Managers’ Index (PMI) fell again to 47.2 in September after growing to 50.8 in August. A PMI index below 50 shows that the manufacturing sector is facing contraction, while a score above 50 shows expansion.

According to HIS Markit, one of the drivers for this decrease is the second large-scale social restrictions (PSBB) in Jakarta, which affects the activities of some companies and creates pessimism among industry players.

Factory expansions are also on hold as consumer confidence has not yet recovered. Economists believe the government should work on managing the pandemic first and start focusing on economic recovery at the beginning of next year.

Bank Indonesia (BI) has pumped up a vast amount of liquidity into the market through the banking sector, but most of the liquidity ends up in government bonds as banks could face difficulties to disburse them as productive loans due to low demand.

Commercial banks allocated their idle funds into government bonds (SBN) amounting to Rp 1.29 quadrillion by Sep. 30, which was even higher than SBN owned by foreign investors totalling Rp 933 billion.

Bank Permata chief economist Josua Pardede explained the source of the problem actually lied with the remaining lower consumer demand. People in the middle-and upper-income segments, which contribute 45 percent to national spending, are holding off on spending because they cannot spend on travel.

Indonesia is likely to see a deeper economic contraction in the third quarter as the country has recorded a decline in three consecutive months for the first time since the 1999 Asian financial crisis, signalling weak purchasing power.

The consumer price index (CPI) fell 0.05 percent in September from a month earlier, driven by lower airline fares and food prices. Deflation stood at 0.05 percent month-on-month in August after 0.1 percent monthly deflation in July, according to Statistics Indonesia (BPS) data.

On that basis, Indonesia’s annual inflation stood at 1.42 percent in September, far below Bank Indonesia’s (BI) target of 2 to 4 percent this year.

“The supply side is strong enough but unfortunately, purchasing power remains weak,” BPS head Suhariyanto told reporters during a virtual presser on Thursday.   “The COVID-19 pandemic has delivered a blow to the demand side as social restrictions to curb the virus’ spread has reduced purchasing power.”

Household spending, which accounts for more than half of Indonesia’s gross domestic product (GDP), fell 5.51 percent yoy in the second quarter, compared with annual growth of 5.18 percent in the same period last year, BPS data shows.

As a consequence, the country’s GDP shrank 5.32 percent in the same period and is widely expected to enter recession in the third quarter. A recession is marked by annual economic contractions in two consecutive quarters.

The government now projects the economy to shrink by 0.6 percent to 1.7 percent this full year, which would mark the first economic contraction in two decades.

Govt to disburse Rp 3.3 trillion in grants to hotels and restaurants
Kompas, p. 1

The tourist industry is one of the most affected sectors by the pandemic as visits dropped significantly. To help the industry, the government will disburse Rp 3.3 trillion (US$220 million) to help hotels and restaurants in 85 regencies and municipalities from October to December.

The Tourism and Creative Economy Ministry’s tourist industry management director, Henky Manurung, said the grant would be disbursed through local governments that knew which hotels and restaurants to help.

According to Statistics Indonesia (BPS), the number of foreign tourist visits to Indonesia dropped 68.17 percent to 3.4 million tourists from January-August, from 10.7 million in the same period of last year.

For the month of August only, tourist visits dropped 89.22 percent year-on-year to 165,000. The majority of tourists  came from Timor Leste (54 percent), Malaysia (35 percent) and China (2.2 percent). They visited Indonesia mostly for business purposes, not for leisure.