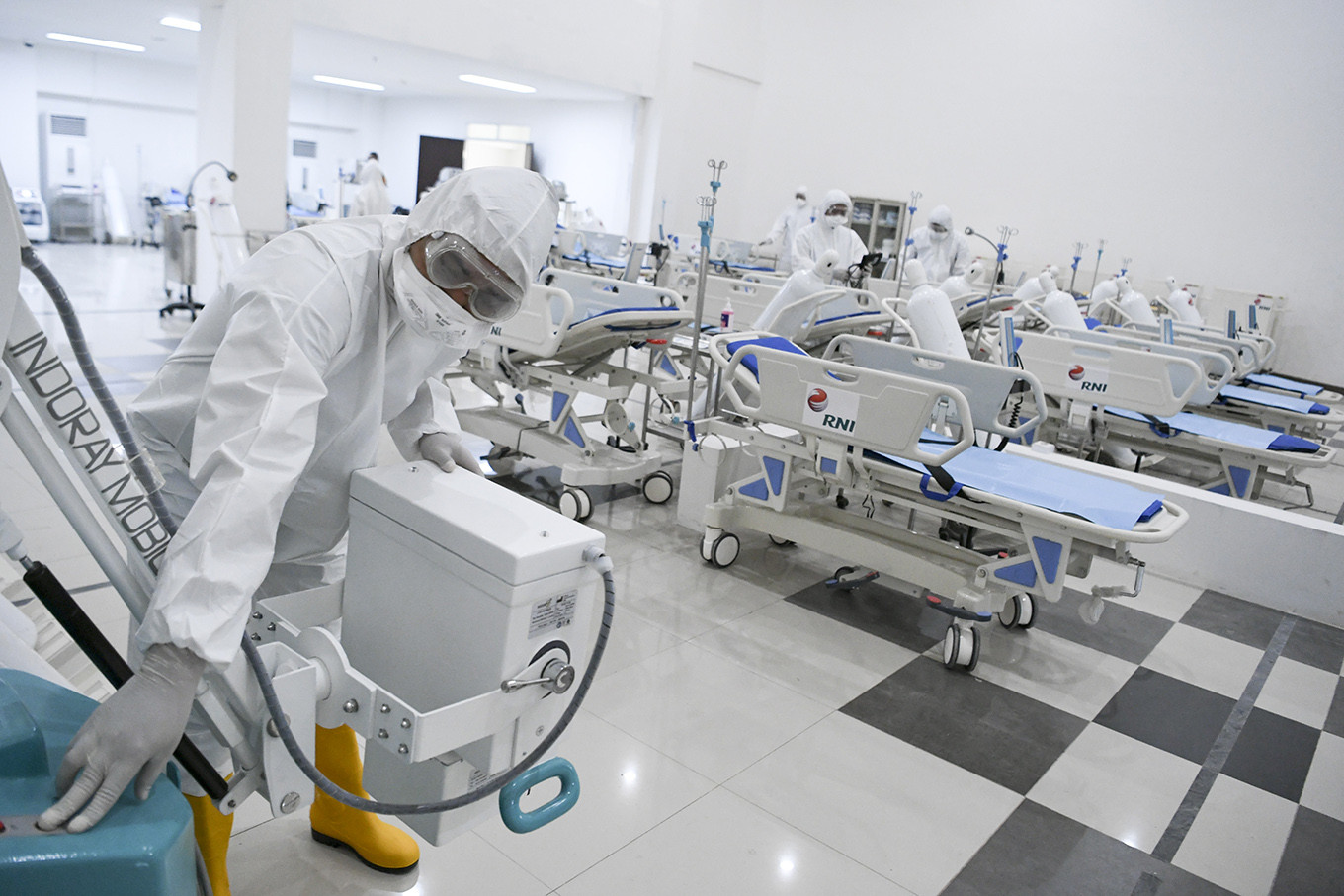 Medical workers inspect equipment at the former athletes village in Kemayoran, Central Jakarta, which has been converted into an emergency hospital to treat COVID-19 patients. (Antara/Pool/Hafidz Mubarak A)

The General Elections Commission (KPU) has announced that the extended registration for 28 regions that only had a single candidate pair contesting in the year-end poll, has closed. KPU commissioner Ilham Saputra stated that although the poll body had extended the registration period, there were still 25 regions that would see uncontested races, including Semarang, Central Java; Kediri, East Java and Balikpapan, East Kalimantan

Ilham went on to remind all regional head candidates to adhere to the health protocols to prevent the emergence of new COVID-19 clusters.

“The Kemayoran athletes village emergency hospital still has room for 2,581 patients with mild symptoms,” Jokowi said during a meeting with the COVID-19 handling and national economic recovery committee. Jokowi went on to say that towers 4 and 5 of the emergency hospital combined still had 4,863 rooms available for self-isolation.

With this many rooms still available, Jokowi said that overcrowding in COVID-19 referral hospitals could be handled. The President then said that information related to the availability of isolation rooms must be conveyed to the public.

Previously, Jakarta Governor Anies Baswedan announced the decision to return to full large-scale social restrictions (PSBB) for the next two weeks due to the increasing number of daily new COVID-19 cases and a decreasing number of free hospital beds.

Pondok Ranggon cemetery in East Jakarta has recorded the highest number of funerals in a week since its establishment as a COVID-19 burial location in March. Nadi, the cemetery's management officer, said 213 bodies had been buried under COVID-19 protocol at Pondok Ranggon last week.

However, Nadi said he did not know how many of the deceased had been confirmed to be COVID-19 positive.

Nadi explained that his team had buried 29 bodies on Monday last week, 32 on Tuesday, 30 on Wednesday, 40 on Thursday, 27 on Friday, 27 on Saturday and 28 on Sunday. Thursday also saw the highest number of bodies buried under COVID-19 protocol in a day at the cemetery since the pandemic was first confirmed in the country in March.

Nadi said Pondok Ranggon cemetery was expected to run out of space for COVID-19 graves in October because of the recent increase in the number of burials.

President Joko “Jokowi” Widodo has appointed Muhammad Lutfi as Indonesian Ambassador to the United States, replacing Deputy Foreign Minister Mahendra Siregar. Following his inauguration today, Lutfi vowed to make the generalized system of preferences (GSP) extension his policy priority. “We will start negotiations immediately; that is a priority,” Lutfi said in a statement. Previously, he served as trade minister and Investment Coordinating Board (BKPM) chairman.

Renewable energy investment only 29.4 percent of target in first half
CNBC Indonesia (https://tinyurl.com/y5jbnxom)

The Energy and Mineral Resources Ministry’s renewable energy director general, FX Sutijastoto, said the realization of renewable energy investment in the first half of this year was only US$500 million, or 29.4 percent of this year’s target of $1.7 billion. Sutijastoto explained that investment in the sector had slowed due to the COVID-19 pandemic. Nevertheless, he remains optimistic about the prospects of renewable energy, saying solar power could push electricity prices down. “The current electricity price is, on average, Rp 1,400 per kilowatt hours (kWh); with the price of solar energy at 6 US cents or Rp 700 to Rp 800 per kWh, there is still room for efficiency improvements,” he said.

The Financial Services Authority is currently preparing a draft regulation for Indonesia’s oldest insurance company AJB Bumiputera. Through the draft regulation, the OJK aims to clarify issues that have not been addressed in Government Regulation No. 87/2019 concerning mutual insurance companies – meaning they are owned by policyholders. OJK spokesperson Sekar Putih Djarot said the OJK would seek feedback on the draft from the general public within next two weeks. To ensure its survival, Bumiputera must submit its financial restructuring plan to the OJK by Dec. 23 at the latest.

Garuda: Domestic market to be driver of recovery
The Jakarta Post (https://tinyurl.com/y43er3h4)

National flag carrier Garuda Indonesia expects the domestic market to drive its business this year, which is showing signs of recovery despite the blow dealt to the aviation sector by COVID-19. Garuda president director Irfan Setiaputra told The Jakarta Post that the company was currently exploring new opportunities in the domestic market, such as in the freight business, as it provides better opportunities than the international market during the ongoing health crisis.

The airline enjoyed an increase of 58.1 percent month-on-month (mom) in the number of domestic passengers to over 110,400 passengers in July. However, it saw an overall 61 percent drop year-on-year (yoy) in the total number of passengers as of July this year, down to 3.6 million passengers. The airline posted a US$712.73 million loss in the first half of this year after booking a net profit of $24.11 million in the same period last year.