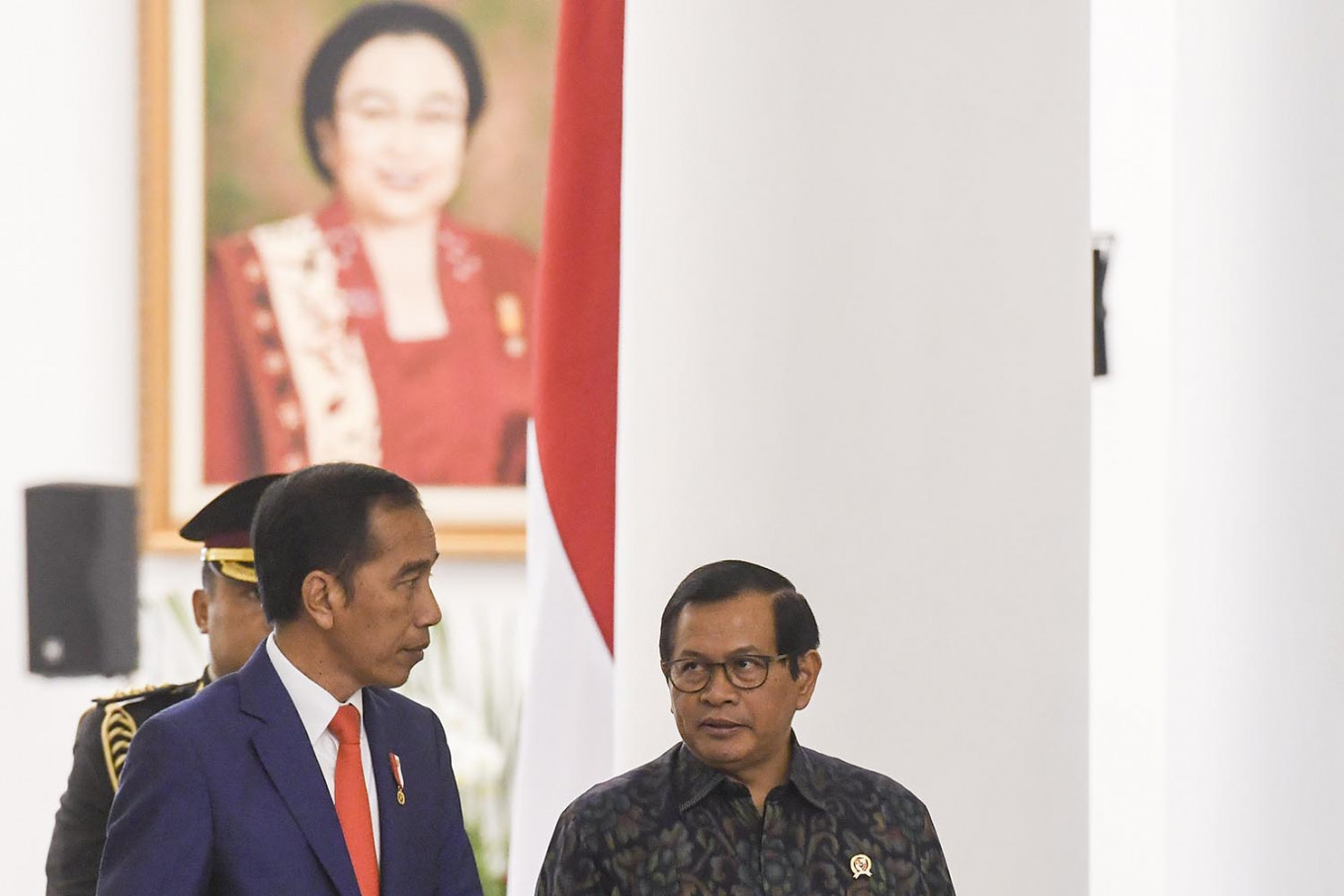 President Joko Widodo (left) accompanied by Cabinet Secretary Pramono Anung prepares to lead a limited meeting (ratas) at the Bogor Palace, West Java, on Tuesday, Feb. 2. The discussion was on the country's readiness for the impact of the coronavirus on the economy. (Antara/Hafidz Mubarak A)

Cabinet Secretary Pramono Anung affirmed that he would back the regency candidacy of his son, Hanindhito “Dhito” Himawan Pramana, in the 2020 Kediri regency election, should the Indonesian Democratic Party of Struggle (PDI-P), of which Pramono is a member, decide to officially back Dhito’s candidacy.

“Initially, Dhito did not register his regency candidacy at either the PDI-P’s Kediri chapter or the PDI-P's central executive board (DPP). His candidacy, however, is deemed necessary because of [the PDI-P's] organizational needs. As Dhito was assigned [to participate in the Kediri regency election] directly by the party, he, as a PDI-P member, does not have any choice [but to accept],” explained Pramono.

On a separate occasion, Dhito also declared his readiness to participate in the 2020 Kediri regency race. “So far, I am still coordinating with other political parties, as well as [the PDI-P’s] regional executive board in Kediri,” said Dhito.

Defense Minister Prabowo Subianto is among the most popular members of President Joko “Jokowi” Widodo’s Indonesia’s Onward Cabinet, according to the latest survey conducted by Jakarta-based pollster Indo Barometer. The survey also shows that the respondents deem Prabowo’s ministerial performance to be the best as compared to his counterparts, with as many as 26.8 percent of the survey’s respondents calling Prabowo the best-performing minster.

In responding to questions about the survey, Indonesian Democratic Party of Struggle (PDI-P) politician Trimedya Pandjaitan said that Prabowo’s popularity proved that President Jokowi had assigned “the right man to the right place” despite the public’s initial skepticism toward Prabowo’s ministerial appointment considering his status as Jokowi’s former rival in the last two presidential elections.

The omnibus bill on job creation has sparked mounting criticisms from the public. Article 170 of the bill, in particular, has been subjected to public scrutiny as it stipulates that presidential regulations could revoke or amend laws, sparking concerns over power centralization into the central government.

Echoing Airlangga’s affirmation, House deputy speaker Aziz Syamsuddin said that it would be impossible for a law to be revoked by a presidential regulation. Aziz suspected that the government had made an error while drafting the bill. “Maybe there was a typo,” said Aziz.

Indonesia recorded an US$864 million trade deficit in January on the back of plummeting oil and gas exports, Statistics Indonesia (BPS) announced this noon. Indonesia’s oil and gas exports experienced the largest decline, falling 34.7 percent year-on-year (yoy) in January to $805.9 million, resulting in a deficit of $1.18 billion, while the non-oil and gas sector booked a surplus of $317 million. “The government has implemented various policies, such as increasing the use of blended biodiesel to 30 percent [B30], which we hope will create a surplus,” BPS head Suhariyanto said.

Industry Minister Agus Gumiwang Kartasasmita has pushed for the creation of an industrial development fund agency, as mandated by Law No. 3/2014 on industry. According to Article 48 paragraph 2 of the law, the industrial development fund agency should function as an agency that finances investment in the manufacturing sector. “We believe, through the creation of this agency, domestic players can manufacture products to substitute imports,” Agus stated today.

Gojek's digital payment platform GoPay can now be used to pay for school tuition through its GoBills feature. The service is connected to 180 educational institutions such as pesantren (Islamic boarding schools), madrassa (Islamic schools), other schools and learning centers in Indonesia. GoPay’s senior vice president of sales Arno Tse said GoPay could also be used to pay for related educational expenditures such as buying books, uniforms and paying for extracurricular activities. "This new service allows parents and guardians to pay for their children's education anywhere and anytime without having to come to the school. Busy parents can focus on other things such as work without worrying about missing payment deadlines," said Arno in his press release.