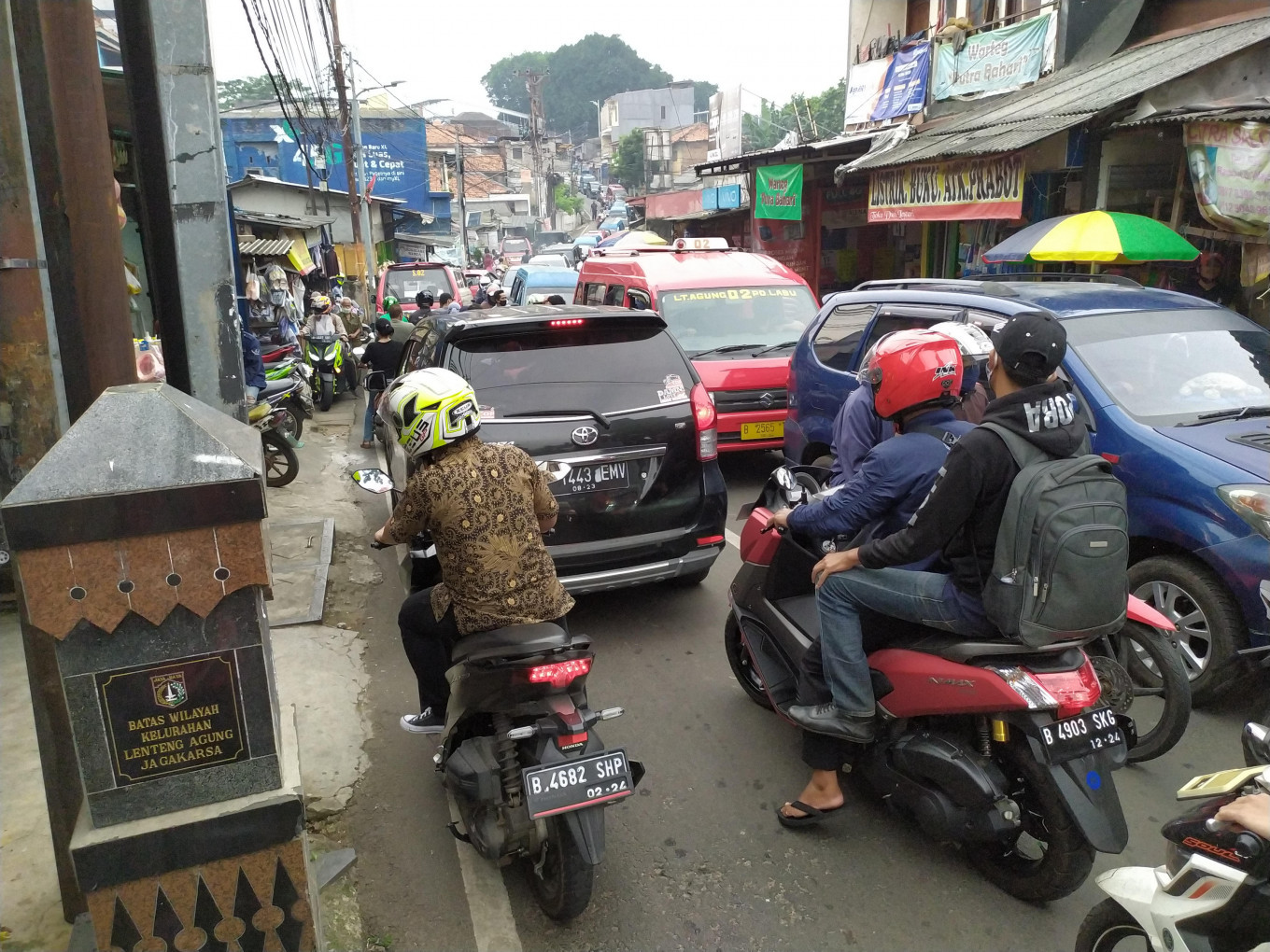 The Jakarta administration plans to extend its large-scale social restriction (PSBB) policy from May 22 to June 4. This two-week extension is expected to be the final one in the capital city.

Jakarta Governor Anies Baswedan stated that the PSBB was extended to further reduce the transmission rate of the novel coronavirus, known as the effective reproduction rate (Rt).

“These two weeks will act as a decisive phase, whether [the effective reproduction rate] will flatten, increase or decrease.”

“This means that one person will infect four people on average,” Anies said.

Ideally, the effective reproduction rate of the virus should be less than 1. However, last week, there were 107 new confirmed COVID-19 cases in Jakarta.

According to Anies, the PSBB policy extended over the next two weeks will be the key to suppressing the effective reproductive rate of the virus in capital city. Anies has asked residents to remain disciplined, stay at home, keep their distances and avoid crowds.

“This could be the final PSBB extension,” Anies said.

The COVID-19 crisis has exposed fundamental problems in the distribution of social assistance, particularly the lack of reliable recipient data, as the government scrambles to shield the most-affected parts of society from economic pains.

The root cause of the problem, left unresolved for years, was the slow pace at which regional governments update their list of beneficiaries, said Athia Yumna, a researcher at Jakarta-based SMERU Research Institute.

The disbursement of all state-sponsored social assistance falls under the purview of the Social Affairs Ministry’s Integrated Data for Social Welfare (DTKS), which was built upon a 2015 Statistics Indonesia survey that sought to map out the distribution of wealth in the bottom 40 percent of the population.

The survey was the last of its kind to date, with the central government opting to give regional administrations the mandate to regularly update the database for their respective areas. However, they proved to be too sluggish in the database upkeep, and the current health crisis has become its unraveling.

The Corruption Eradication Commission’s (KPK) deputy for prevention, Pahala Nainggolan, said the antigraft body had urged regional authorities to use citizenship identification numbers (NIK) to clamp down on mistargeted aid disbursement, which he also said was the result of outdated DTKS data.

Pahala argued that a lack of urgency among regional authorities to update their datasets had resulted in mistargeted distribution.

“We see huge inefficiencies [in aid distribution], with stories of poor people [not getting their share of relief] because of inaccurate data,” he said.

The KPK is working with various stakeholders to monitor aid distribution and disbursement. It issued a circular on April 21 instructing relevant ministries and regional officials to use the DTKS database as their first reference for distributing aid.

Resumption of regional head elections depend on pandemic
Kompas, p. 3

The central government, House of Representatives and General Elections Commission (KPU) have decided to use data and information provided by the COVID-19 rapid-response team and health experts as the underlying basis for decisions regarding the 2020 regional head elections. This is so that the elections, including their preliminary stages, do not aggravate the spread of COVID-19.

According to the plan, the House Commission II will be holding a consultation meeting with the central government and the KPU to discuss the preliminary stages and schedule for the upcoming elections, which have been postponed until December. The meeting was originally scheduled for Wednesday but was postponed as not all participants could attend.

However, for the meeting scheduled next week, the government will only be represented by the Home Ministry. There will be no representative from the COVID-19 rapid-response team and no health expert attending the meeting.

Judicial and constitution watchdog Kode Inisiatif chairman Veri Junaidi deemed the upcoming meeting to be inadequate in decision-making for the upcoming elections.

Veri argued that the meeting must be attended by a task force representative and health experts so they can explain the current conditions of the pandemic and provide suggestions on the best time to hold the elections.

In a limited meeting led by President Joko “Jokowi” Widodo, Religious Affairs Minister Fachrul Razi said the final decision regarding new haj departures would be announced on June 1, but is also subjected to further postponement as the decision would be confirmed on Wednesday.

“After we reported to the President, he communicated with King Salman and discussed how the decision-making has progressed. So, [his decision] is delayed until early June. We will revisit [the issue] later,” Fachrul said.

According to the initial plan, the departure of the first haj group was targeted for June 26. However, the Religious Affairs Ministry is still waiting for news from the Saudi government regarding the pilgrimage.

“Either everyone departs for haj, only some depart or no one departs at all.”

Pademangan district in North Jakarta has become the latest densely populated area in the capital to be declared a COVID-19 red zone after local authorities recorded a high number of confirmed cases.

As of Tuesday, health authorities have reported 150 confirmed COVID-19 cases in the neighborhood, with 72 more people waiting for their swab test results. The Pademangan district administration responded to the situation by imposing stringent measures to flatten the infection curve.

Pademangan district head Mumu Mujtahid said the COVID-19 transmission in the area started when a resident, a member of the worldwide Islamic missionary movement Tablighi Jamaat, returned from India after attending a tabligh (Islamic mass gathering) there.

Authorities started contact tracing the case to identify the people he had been in contact with and may have contracted the disease as a result. They also decided to hold mass rapid testing. However, the event was largely ignored by local residents, as only 14 showed up to be tested on the first day.

“They were afraid they would be alienated [if they tested positive for COVID-19]. I told them to write a statement agreeing that the government would not take care of them if they turn out to be sick and rejected to participate in rapid testing,” Mumu said on Tuesday as quoted by kompas.com.

Residents were eventually willing to get tested, he added, and it was discovered that 593 out of 1,445 people were “reactive” to the novel coronavirus. Of the 593, 150 people tested positive for COVID-19.

Public activity increased lately with Idul Fitri approaching, even though the large-scale social distancing (PSBB) measures have not been lifted. Crowds have been spotted in Soekarno-Hatta Airport Terminal 2, after limited flights were permitted, and in markets across Jakarta, especially in Tanah Abang.

Meanwhile, the rate of COVID-19 cases has not seen any sign of declining, with an additional 486 positive cases bringing the total to 18,496 cases as of May 19. The Jakarta provincial government stated that the still increasing number of positive cases had prompted the administration to extend the PSBB period to June 4. Jakarta governor Anies Baswedan said that if the people were disciplined in social distancing for the next two weeks then the pandemic reproduction number should fall.

Crowds in traditional markets along with packed roads during busy hours can still be seen in Surabaya, while outside of Java similar sights can be seen, such as in Pekanbaru, where PSBB restrictions have been extended thrice. In response to these events, President Joko “Jokowi” Widodo ordered health protocols to be ensured before and during Idul Fitri. The government also affirmed that the homecoming exodus (mudik) ban was still in effect.

Indonesian Employers Association (Apindo) chairman Hariyadi B. Sukamdai advised the government to focus on managing the pandemic before loosening PSBB measures. On the other hand, Indonesian Shopping Center Association (APPBI) Jakarta chairwoman Ellen Hidayat stated that shopping malls were prepared to operate according to health protocols.

Indef economist Bhima Yudhistira said the government had not been firm in implementing PSBB and in fulfilling its obligations on the public’s basic needs.

Bank Indonesia plans to inject a total of Rp 1.15 quadrillion into the banking system and financial market to stabilize and support the government’s effort to jumpstart the economy affected by the COVID-19 pandemic. Of the total, the central bank has injected Rp 583.5 trillion, and plans to inject another 563.6 trillion later this year.

Then, in May, the central bank injected an additional Rp 110.8 trillion into the banking system and spent another Rp 79.7 trillion in the form of a quantitative easing policy.

The government is also managing the maturities of each bonds so that it would not burden state budgets. This year, the government will issue about Rp 1 quadrillion in bonds. Meanwhile, the total principal and interest servicing in this year’s budget would reach Rp 105.8 trillion.

Finance Minister Sri Mulyani Indrawati said that most of the new debt the government will issue will be used to finance efforts to alleviate the impacts of the COVID-19 pandemic on the people and businesses.

According to Kontan research, there are only 32 listed companies with free float shares of 40 percent or more. The new tax rates are contained in the Finance Ministry’s director general of taxation regulation PER-8/PJ/2020.

Tax analyst Danny Darussalam said the lower tax rates would encourage business expansion, especially after COVID-19. Moreover, if the government was committed to further cutting the corporate tax rate from 22 to 20 percent in 2020, it would help businesses thrive. He said when businesses were expanding, it would expedite the process of economic recovery from the pandemic.

Indonesia’s readiness to shift toward a clean-energy economy took another step back last year because of fossil fuel subsidies and faces a monumental hurdle this year as a result of the coronavirus pandemic.

Indonesia fell seven ranks to 70th of 115 countries surveyed in this year’s Energy Transition Index (ETI), down from 63rd last year. The index is compiled annually by the World Economic Forum (WEF) think tank, which also described this year as a period of historically “unmatched economic instability” due to COVID-19.

Vijay Singh, WEF project head for the future of energy and materials, said Indonesia’s slip in the latest index was mainly driven by setbacks in economic development “specifically due to the distortions created by the presence of energy subsidies”.

WEF’s index report acknowledges the necessity for governments to prioritize spending on health care, social welfare and business continuity amid the pandemic but also argues that “the risks to the future of human civilization from climate change remain”.

Energy economist Alloysius Joko Purwanto separately said that coal and oil-related subsidies were likely the main contributors to Indonesia’s energy transition setback. Oil is mainly consumed by the transportation sector and coal by the power sector.