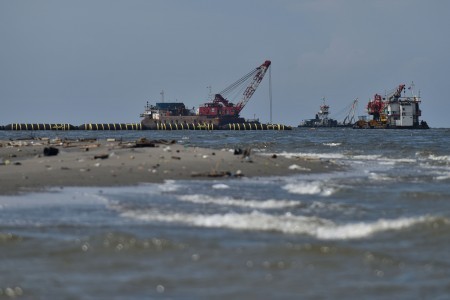 The photo shows construction activities in one of reclaimed islet in Jakarta Bay in North Jakarta on April 5. Jakarta Governor Basuki Tjahaja Purnama questions the City Council's decision to stop the deliberations of two bylaw drafts of reclamation.(Antara/Wahyu Putro)

Indonesian Anti-Corruption Community (MAKI) coordinator Boyamin Saiman has revealed that graft convict and fugitive Djoko Soegiarto Tjandra was granted a permit to travel in Indonesia by a government agency.

Boyamin said his party had acquired a photo of a letter issued by a government agency from a credible source. In the letter, Djoko was titled as a consultant and granted a permit for a Jakarta-Pontianak round trip.

Boyamin did not divulge the name of the government agency.

Jakarta Legislative Council (DPRD) member Gilbert Simanjuntak has criticized Jakarta Governor Anies Baswedan for his claim that the city administration had granted a land reclamation permit for the expansion of Ancol to prevent the annual floods. The Indonesian Democratic Party of Struggle (PDI-P) politician also questioned the river naturalization program, which is part of Anies’ key election campaign promises.

According to Gilbert, the governor was inconsistent with his promise. In his election campaign, Anies had said that river dredging was not the solution to the city’s recurring floods, but now Anies himself had given the nod for a reclamation project in the city’s popular tourist spot of Ancol in North Jakarta, which included river dredging.

Anies has defended his decision to grant Ancol a permit for the reclamation project as part of the city’s efforts to tackle the annual floods.

Surakarta in Central Java has turned into a so-called COVID-19 black zone, as the region recorded 18 new cases on Sunday, bringing the total number of infections to 63, according to Surakarta COVID-19 task force head Ahyani.

Ahyani said he did not expect the number of confirmed cases in the region to surge. He explained that 15 of the 18 new cases were infections among resident doctors from the region’s Sebelas Maret University (UNS) who were currently training at Dr. Moewardi General Hospital.

Due to the surge, Ahyani said, he would prohibit mass gatherings, including face-to-face learning activities in schools in the region.

Bank Indonesia (BI) recorded a large drop in its Prompt Manufacturing Index (PMI) to the level of 28.55 percent in the second quarter of 2020, from 45.64 percent in the first quarter. The index is at its lowest point in the past three years. Nevertheless, BI predicts a swift recovery in the third quarter following the relaxation of large-scale social restrictions (PSBB). As a result, the PMI in the third quarter is expected to increase to a level of 47.98 percent.

The Association of Indonesian Automotive Manufacturers (Gaikindo) recorded a 78.8 percent year-on-year (yoy) drop in car sales to 29,862 units in June. However, car sales in June were better than in May at 17,083 units, following the relaxation of large-scale social restrictions (PSBB). Gaikindo secretary general Kukuh Kumara told CNBC Indonesia that car sales in the wholesale market increased from 3,551 units to 12,623 units.

Private lender Bank Mayapada International owner Dato Sri Tahir has said Taiwan-based Cathay Life Insurance Co. Ltd., which currently holds a 37.33 percent stake, is considering a capital injection into the bank. Since early this year, Tahir has injected Rp 4.5 trillion (US$312.5 million) into Bank Mayapada, in the form of Rp 1 trillion in cash and property worth Rp 3.5 trillion. Although Tahir denied that the capital injection by Cathay insurance would dilute his shareholding, the Financial Services Authority (OJK) deputy commissioner for banking supervision, Slamet Edy Purnomo, said Cathay’s capital injection would make the insurance company a majority shareholder of Bank Mayapada.

A TikTok Indonesia representative said on Friday that the Chinese video-sharing platform wanted to capture as many of Indonesia’s 6 million small and medium enterprises (SMEs) as possible with its new advertising service for businesses. The timing is ideal for TikTok as many Indonesian SMEs have flocked to online platforms to market their products as the COVID-19 pandemic continues, said TikTok Indonesia direct sales leader Pandhu Wiguna. TikTok owner, Beijing-based ByteDance, plans to take a US$100 million loss this year to provide free advertising to SMEs worldwide, amounting to $300 each. With Friday’s announcement, TikTok added to a list of tech heavyweights, including photo-sharing platform Instagram and e-commerce platforms Tokopedia and Lazada, taking part in Indonesia’s plan to digitize 2 million small businesses this year.