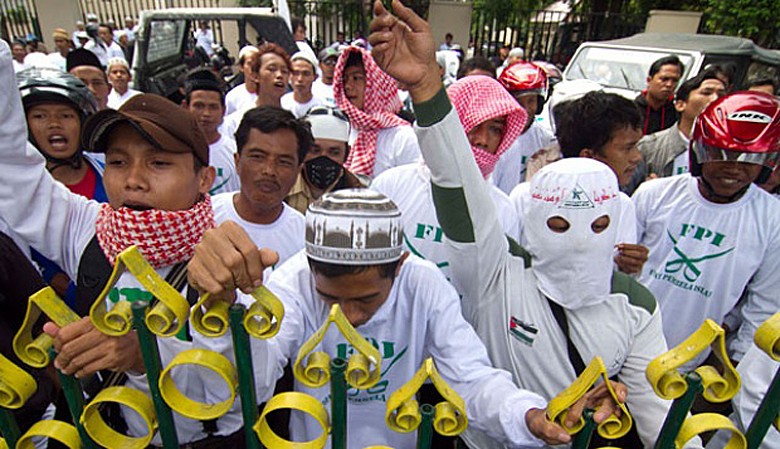 The government’s mixed messages regarding its fight against radicalism have drawn criticism, even from supporters of President Joko “Jokowi” Widodo’s administration.

In the past weeks, the government and various ministries have issued a regulation that sets out criteria for those “vulnerable to being exposed to radical views” and a joint decree that prohibits civil servants from posting, “liking” or sharing opinions that “contain hate speech against Pancasila, the 1945 Constitution, Bhinneka Tunggal Ika [Unity in Diversity], the NKRI [Unitary State of the Republic of Indonesia] or the government”.

Religious Affairs Minister Fachrul Razi in particular has been in the headlines for a number of controversial statements – including a canceled plan to ban the wearing of niqabs in government institutions. Most recently, his issuance of a ministerial regulation that requires majelistaklim (Quran study groups) to be registered with the ministry caused a backlash, including from political parties within the ruling coalition.

Golkar Party lawmaker Ace Hasan Syadzily said the regulation was “over the top”. At the same time, Fachrul’s recent statements in support of renewing the permit of a controversial mass organization, the Islam Defenders Front (FPI), has made some members of the public question the government’s commitment to combating radicalism, resulting in the hashtag #JokowiTakutFPI (Jokowi is afraid of the FPI) trending nationwide on Twitter on Thursday.

According to Helmy, such a regulation is unnecessary given the peaceful state of religious activities. Helmy said there was nothing to worry about with majelistaklim as it is merely a regular forum to recite Quranic verses or pray for the dead or yasinan, tahlilan (mass prayer) and other spiritual activities.

Likewise, Muhammadiyah chairman Haedar Nashir said that the government did not have to take excessive measures to regulate religious activities. “Do not generalize and paint all Muslims as the target for deradicalization and discriminate against them using a monolithic regulation,” Haidar said.

The Indonesian Military (TNI) and the National Police said they ensured peace prevailed in Papua during the anniversary of the Free Papua movement (OPM) on Sunday. Cendr?awasih Military Command spokesperson Lt. Col. Eko Daryanto said security authorities did not detect any movement of armed criminal groups. “The situation is under control,” said Eko on Sunday.

Eko said he expects peace and order could be maintained until Christmas and the new year.

A week ahead of Dec. 1, the Indonesian Military and the Police sent more than 1,300 personnel to several conflict-prone areas in Papua. TNI commander Air Chief Marshal Hadi Tjahjanto and National Police Chief Gen. Idham Azis have been in Papua since Nov. 27 to directly oversee the operation.

The Constitutional Court selection team established by President Joko “Jokowi” Widodo is finalizing its work and will complete the selection of candidates to replace Justice I Dewa Gede Palguna by the end of this month. Palguna is to retire on Jan. 7 next year.

Indonesia must find a panacea for the “hot peace” simmering as a result of growing tensions among the world’s strategic rivalries, foreign policy experts said on Saturday as the government called for global collective leadership to maintain peace in the community of nations.

Foreign Policy Community of Indonesia founder Dino Patti Djalal defined “hot peace” as a 21st-century condition of geostrategic rivalry between countries with a zero-sum mentality, a clear reference to the ongoing competition between superpowers China and the United States.

“The Cold War is behind us, but there is something new coming that will [destabilize] the peace. This is indeed the consequence of the hot peace,” Dino said in his opening remarks at the Conference on Indonesian Foreign Policy in Jakarta on Saturday.

Delivering a keynote speech afterward, Foreign Minister Retno LP Marsudi mostly concurred with the assessment, saying that Indonesia would at the very least make every effort to “cool the hot peace”. However, she insisted that the country would not be able to do it on its own. Retno has for the past year set out to promote an ASEAN outlook on the Indo-Pacific, a region that is increasingly becoming a new battleground for exerting geopolitical influence.
BUSINESS AND ECONOMICS NEWS AND HEADLINES
Reforms to boost economy taking shape
The Jakarta Post, headline

The government has begun to flesh out supporting rules for Indonesia’s sweeping regulatory reforms that will open up the economy and ease investment to boost sluggish growth and create jobs.

The new regulations are to open up sectors previously closed to foreign investors by revising the negative investment list (DNI), streamlining all business licenses under the Investment Coordinating Board (BKPM) and reducing taxes on corporate income, expatriates and dividends, among other changes.

Indonesia has struggled to attract foreign investment, with economic growth remaining sluggish at 5.02 percent in the third quarter, the lowest rate in more than two years.

The government will include 38 new business sectors in the list of business fields that are eligible for the deduction of income taxes by up to 30 percent of their investments.

However, unlike in the previous program, this year nickel mining companies will no longer be eligible for the tax allowance program.

In general, businesspeople welcome the new regulation, as it not only allows more businesses to benefit from tax incentives, but it also simplifies the processes of applying for the incentives, Indonesian Chamber of Commerce and Industry (Kadin) deputy chairwomen Shinta Widjaja Kamdani said.

The monthly inflation rate is expected to increase by 0.2 percent in November this year, a slight increase from 0.02 percent in the previous month. However, the November inflation is slightly lower than the average of 0.29 percent during the last four years.

Private lender Bank Central Asia (BCA) economist David Sumual said the rise in inflation in November was due to the rising prices of consumer goods, transportation, fashion products and foodstuffs, which annually go up at the end of the year.

In addition to seasonal effects, food prices also rose because of a prolonged dry season, which delays the growing season.

PGN’s director for strategy and business development, Syahrial Muktar, said China’s demand rose sharply after the government encouraged the use of LNG to replace coal. Syahril estimated that China would need to import 50 metric tons of LNG to meet its needs for a year.

PGN will send six shipments of LNG to China starting January next year following the recent signing of the sale and purchase agreement between PGN and China’s Sinopec.

PGN hopes it will be able to sell more LPG to other Chinese companies in the future.

To avoid exceeding this year’s subsidized diesel distribution quota, the government has moved to increase the limit from 14.5 million kiloliters to 16 million kl.

State-owned oil and gas holding company Pertamina president director Nicke Widyawati told lawmakers in Jakarta on Thursday that the government had increased the subsidized diesel quota as the initial limit was expected to be surpassed this month.

She said the company saw diesel consumption spike this year because of growing mining and agriculture activities in certain regions and the expansion of the trans-Java and trans-Sumatra toll roads.