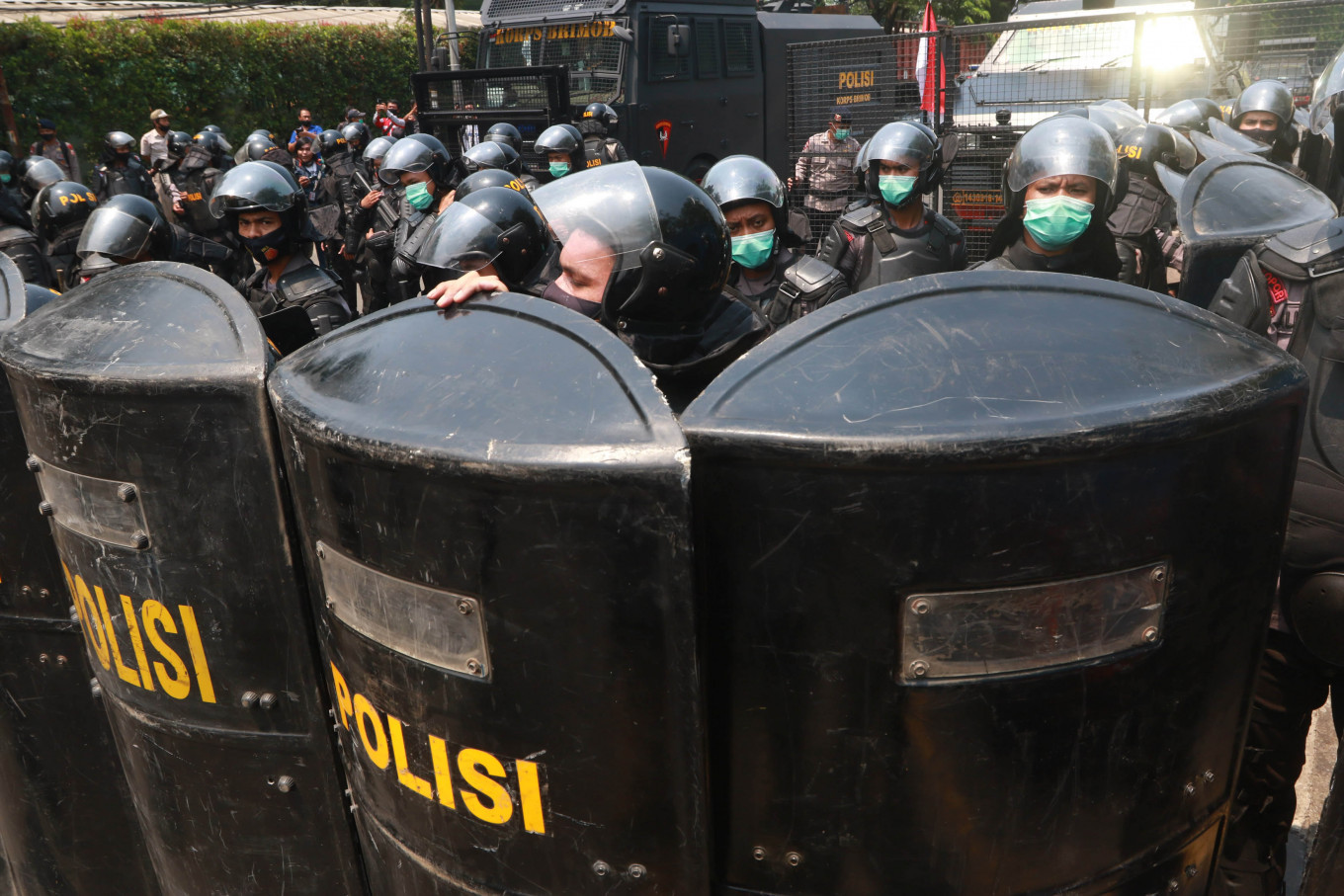 Police officers use their shields to form a riot line during a protest organized by the Tangerang Workers Alliance on Jl. Daan Mogot in Tangerang, Banten, on Oct. 7, 2020. Three days of nationwide protests were held after the House of Representatives passed the job creation omnibus bill on Monday. JP/Dhoni Setiawan (JP/Dhoni Setiawan)

Constitutional Court spokesman Fajar Laksono has insisted that the court will remain neutral in the case of a judicial review of the recently passed Job Creation Law, which is expected to be submitted by labor unions.

Even though President Joko “Jokowi” Widodo had submitted a request for the court to support the jobs law, Fajar gave an assurance that the court’s stance would not be affected.

The court will process the petition for a judicial review, ensuring transparency with the public. The public was also asked to actively participate and monitor progress in the case.

President Joko “Jokowi” Widodo has appointed Vice President Ma’ruf Amin as chairman of the steering committee for the integrated coordination team for welfare development acceleration in Papua and West Papua.

The committee was formed through Presidential Decree (Keppres) No. 20/2020 and is tasked with coordinating the implementation of policies to accelerate welfare development in both provinces.

Defense Minister Prabowo Subianto has been invited by United States Defense Secretary Mark Esper to visit the US from Oct. 15 to 19.

“This invitation is intended to discuss bilateral cooperation in the defense sector” said Defense Ministry spokesman Dahnil Anzar Simanjuntak in a written statement on Thursday.

Dahnil said that Prabowo’s planned visit to the US had nothing to do with military alliances but sought only to maintain diplomatic relationships.

Credit rating agency Fitch Ratings has downgraded state-owned construction company Waskita Karya’s rating to CCC+, from the previous B. The downgrade reflects Waskita’s liquidity problems and financing risks, which have been exacerbated by the COVID-19 pandemic. Even though the company has secured financing to pay back its bonds that mature this month, Fitch believes that Waskita will face challenges in financing its operation and investment. Furthermore, Fitch predicts that Waskita’s new construction contracts will contract by 35 percent. “Waskita has the second-largest order book compared with other state-owned construction companies, in which around 70 percent of the company’s contracts are national strategic projects,” Fitch said in a statement.

State-owned lender Bank Tabungan Negara (BTN) has signed an agreement with peer-to-peer (P2P) lender KoinWorks to disburse a total of Rp 75 billion (US$5.1 million) to micro, small and medium enterprises (MSMEs) in the property sector. BTN president director Pahala Nugraha Mansury said each MSME would receive loans up to Rp 1 billion. KoinWorks CEO and cofounder Benedicto Haryono explained that the provided loans were short-term with one to three months’ maturity date. Pahala hopes this collaboration would help MSMEs in penetrating the supply chain in the property sector.