Defense budget could be casualty of COVID-19 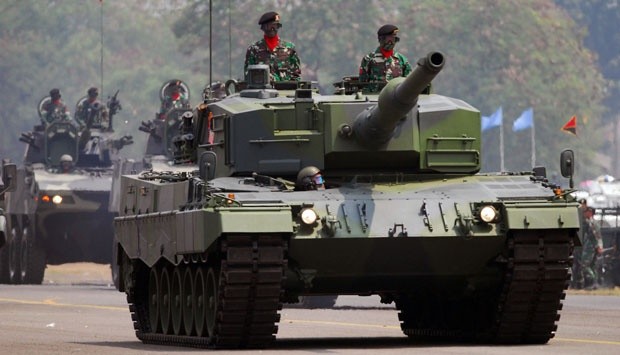 Defense budget could be casualty of COVID-19
The Jakarta Post, headline

As it is almost certain that the COVID -19 outbreak will put a squeeze on Indonesia’s defense spending, the government must confront the two-pronged challenge of rethinking its defense strategy priorities while also shifting its attention to non-traditional security threats, an expert has said.

With the COVID-19 outbreak continuing to take a toll on the healthcare system and the economy, the government will have to prioritize spending on relief efforts, a move that will put a strain on the defense budget and affect the Minimum Essential Force (MEF) target, defense analyst Curie Maharani of BINUS University told The Jakarta Post.

Under current circumstances, Curie said the government could look to “cost-effective alternatives” to maintain the level of readiness set under the MEF scheme. Faced with the current budget constraints, she added, the government could explore the option of leasing defense equipment from other countries, as purchasing secondhand equipment could incur high maintenance costs.

Fellow defense analyst Anton Aliabbas of the human rights and security reform watchdog Imparsial also called for a review of the primary weaponry system’s modernization target in a post-COVID-19 scenario.

Defense Ministry spokesman Dahnil Anzar Simanjuntak said to deal with the budget constraints, the government would prioritize the procurement of defense equipment from local manufacturers.

The Corruption Eradication Commission (KPK) is currently investigating an alleged link between a recent bribery case pertaining to several infrastructure projects in East Kutai, East Kalimantan, and the main suspect’s campaign budget in the upcoming regional election. The case has served as a warning that abuse of power may become more rampant nearing the 2020 regional elections slated for December.

KPK spokesperson Ali Fikri said on Sunday that the antigraft body was still intensively investigating the case and would summon a number of witnesses.

The KPK arrested on Thursday East Kutai Regent Ismunandar and his wife, East Kutai Legislative Council (DPRD) speaker Encek UR Firgasih, and 13 other people for bribery pertaining to several infrastructure projects in the regency. Ismunandar and Encek have been named suspects and accused of accepting at least Rp 2.6 billion from businesspeople Aditya Maharani and Deky Aryanto, whose companies had been working on several infrastructure projects across the regency.

Aditya reportedly transferred Rp 125 million to a bank account owned by an individual identified as Aini, who is allegedly involved in Ismunandar’s campaign for reelection in the upcoming regional elections.

Researcher Oce Madril of the UGM Center for Anti-Corruption Studies said that generally there was always a connection between local political contestations and corruption cases at the regional level.

“Regional election might be one of the factors [prompting corruption] as candidates need a large budget [for campaign purposes],” said Oce.

Legal experts are suggesting that President Joko “Jokowi” Widodo send the House of Representatives a letter objecting to the deliberation of the Pancasila Ideology Guidelines (HIP) bill to reaffirm the government’s stance toward the controversial bill.

Previously, the government rejected the plan to deliberate the HIP bill initiated by the House amid outcry from members of the public who questioned the urgency of the bill as well as some problematic provisions in the bill.

Constitutional law expert Bivitri Susanti said according to Law No. 12/2011, a letter must be issued within 60 days to stop the deliberation of a bill.

Parameter Politik Indonesia executive director Adi Prayitno suggested that the government should gather input from experts and the general public before deciding whether to drop or continue the deliberation of the bill.

A number of ministers are under scrutiny following President Joko “Jokowi” Widodo’s recent threat to reshuffle the Cabinet. A recent survey by Indonesia Political Opinion (IPO) named several ministers that were most vulnerable to be reshuffled.

Dedi noted that some of the vulnerable ministers were deemed “close” to the President, such as Luhut and Yasonna.

Domestic workers in Indonesia may see a light at the end of the tunnel as lawmakers move to advance a domestic worker protection bill that has been in limbo for over a decade.

Activist Lita Anggraini from the National Network on Domestic Worker Advocacy (Jala PRT) said she hoped all House of Representatives factions would approve the bill and that the government would respond positively to the initiative.

Lita’s comments followed a House Legislation Body (Baleg) decision on Wednesday to endorse the bill in an upcoming plenary session. Baleg will later deliberate the bill itself — even though the body has yet to schedule the discussion — before the legislation can be passed into law by the House.

The bill includes provisions regarding the recruitment of domestic workers and ensures their legal rights, such as the right to education provided by their placement agencies and administered by the government. The bill also details criminal penalties in cases of discrimination, exploitation, harassment and violence by employers and placement agencies.

Companies in the health sector are growing amid the COVID-19 pandemic. Financial reports in the first quarter show that 15 health companies saw an increase in their yearly revenue. The companies are planning to expand their business to maintain the positive financial performance this year.

Chain hospital PT Mitra Keluarga Karyasehat will open a new hospital in Surabaya, East Java. The construction of the hospital is 80 percent complete.

Positive sentiment in the health industry is supported by the government’s local product requirement. Industry Minister Agung Gumiwang Kartasasmita said he would issue regulations and policies supporting the sector’s growth.

The government is planning a burden sharing scheme to pay COVID-19 mitigation debts worth Rp 397.6 trillion (US$27.44 billion) for public goods and Rp 505.86 trillion for non-public goods.

Assuming a 7.36 percent interest rate for the 10-year period government debt papers (SUN) from January to June this year, the government will have to pay Rp 66.5 trillion in interest per annum. The burden sharing scheme requires Bank Indonesia (BI) to pay 53.96 percent of the interest worth Rp 35.9 trillion.

The scheme has received a negative response from foreign investors. The rupiah fell to Rp 14,566 per US dollar after the scheme was announced last week.

According to Institute for Development of Economics and Finance economist Bhima Yudhistira, the burden sharing scheme has raised doubts from foreign investors because it shows that BI is under pressure from the executives.

The Investment Coordinating Board (BKPM) projects that the integrated industrial area (KIT) in Java will remain attractive for foreign companies relocating from China.

BKPM investment committee member Rizal Calvary said investors would examine all aspects of a business location, including connectivity and market potential, before deciding to relocate their factories.

The government is intensively offering the KIT in Batang, Central Java, to companies planning to relocate their business from China. The industrial area is offering eased investment such as a long-term land lease scheme. It is also connected to the trans-Java toll road.

The Industry Ministry’s director general for international industry, Dody Widodo, said there was a total of 12,500 hectares of industrial area available to offer. There will be thousands more prepared in the long-term. In the 2020-2024 National Medium-Term Development Plan, the government is planning 27 new industrial areas.

The relaxation of large-scale social restrictions (PSBB) has generated optimism in business. Indonesian Chamber of Commerce and Industry (Kadin) chairman Rosan Roeslani said business movement had started to show in June, but the public remained prudent as the fear of a second COVID-19 wave looms.

“Supply and demand are not normal yet. From the supply side, the government stimulus has not worked, which resulted in slow economic activity. Demand is still weak because the public is still holding back on spending,” said Rosan. He also stressed the importance of government support to improve business optimism.

Indonesian Employers Association (Apindo) deputy chairman Shinta Kamdani said the PSBB relaxation had stimulated economic activity. She said the Purchasing Managers’ Index (PMI) of Indonesian manufacturing had increased by 10 points from 28.6 points to 39.1 points, which shows that manufacturers will up their performance.

Furthermore, bankers welcome the PSBB relaxation since it will increase consumption, thus pushing up demand for lending. Bank Mandiri president director Royke Tumilaar said even the property sector was seeing an increase in demand, indicating that the public had started to invest. He recommends that the government accelerate spending, especially in sectors that would yield a high multiplier effect.

The government has collected more than Rp 40 trillion (US$2.82 billion) in dividends from five major state-owned enterprises (SOEs) alone this year, while concurrently throwing a lifeline to ailing SOEs in a bailout program worth more than Rp 150 trillion.

The five state firms paid out Rp 40.36 trillion in dividends to the government, a 16.72 percent year-on-year increase from last year’s figure of Rp 34.58 trillion.