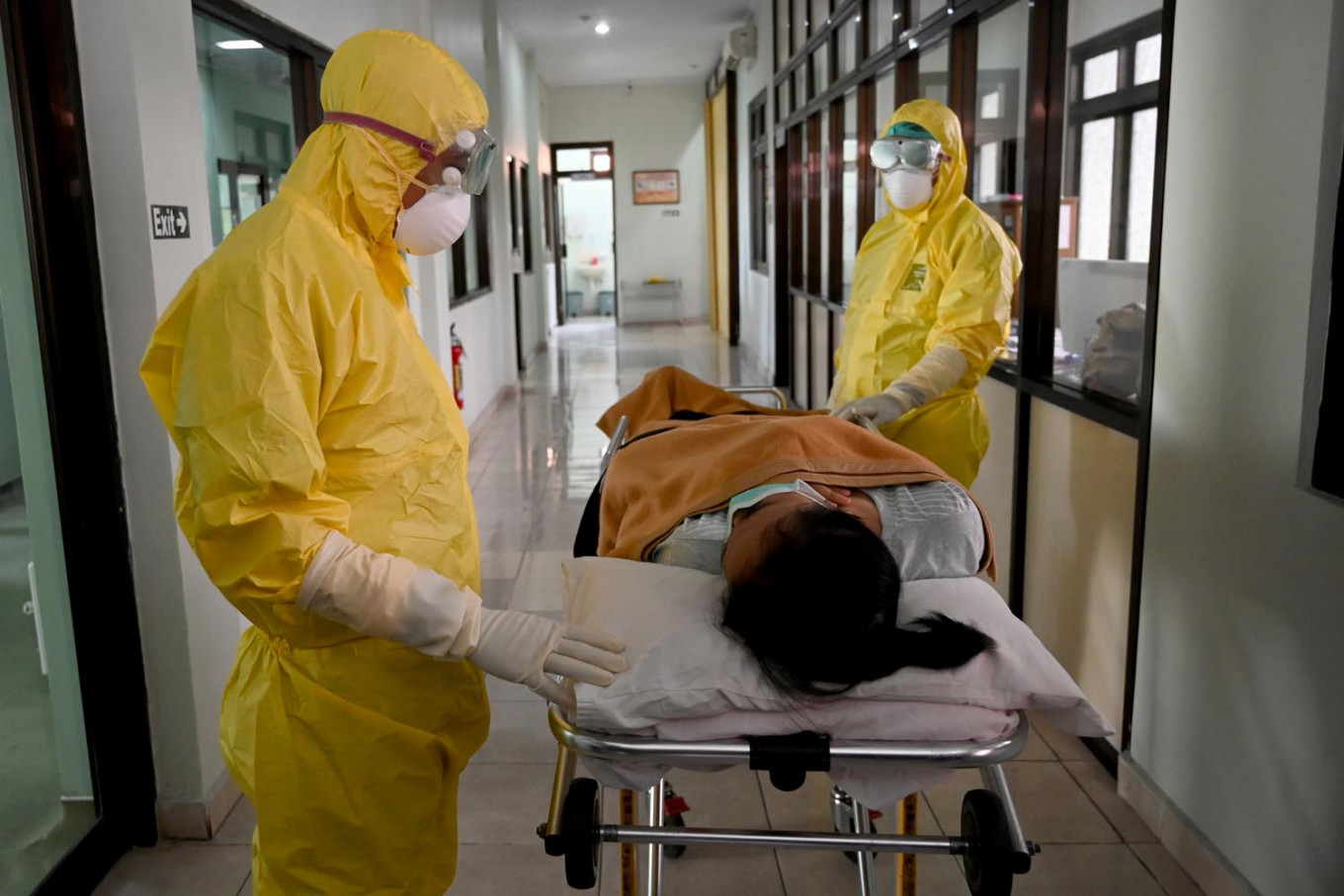 The COVID-19 pandemic has put a massive strain on Indonesia’s healthcare system, with reports of inadequate medical supplies and the deaths of hospital workers as patient numbers continue to surge.

A hospital crisis looms as reports indicate that the combined capacity of the 132 referral hospitals designated to treat COVID-19 patients is far from adequate. Protective gear for medical workers is in short supply in both referral and regular hospitals across the country.

While the system is inadequate, the government still maintains a lack of transparency over releasing information about patients and its preparedness, a policy that it has maintained since the emergence of the outbreak in January. This often leaves medical workers in the dark about whether they are treating a COVID -19 patient and it puts their lives at risk.

The frustration of medical workers is emerging in many provinces as medical supplies are depleted.

Yani Muchtar, a radiologist at Harapan Kita Hospital, urged the government to devise a system that enabled seamless cooperation between hospitals should any of them fail to function because of short supplies of resources at the height of the public health crisis.

The General Elections Commission (KPU) decided to postpone three preliminary stages of the 2020 simultaneous regional elections during the rapid spread of the COVID-19 coronavirus in the country. The three stages are the inauguration of voting committees, verification of independent candidates and voter data updating.

KPU commissioner Viryan Aziz said the three stages were delayed indefinitely. However, the KPU has yet to decide whether the scheduled day of the regional election itself would be postponed as well, perhaps choosing to wait for further developments in the COVID-19 outbreak.

Meanwhile, an election watchdog, the Association for Elections and Democracy, has requested the KPU prepare and stage a more detailed alternative arrangement for the regional elections to anticipate the worst case.

Public Works and Housing Minister Basuki Hadimoeljono said on Sunday that construction work on the apartments had been completed and that the COVID-19 hospital would start operating on Monday.

“One hundred percent [of the construction work] has been completed; all that’s left is the installation of equipment, which will be organized this afternoon,” Basuki said.

Health Ministry’s disease control and prevention director general, Achmad Yurianto, said the rapid test kits, which were procured from China, would be first distributed to areas with the highest infection numbers, which are Jakarta and its satellite cities.

“They will not be distributed to regional areas yet. We will [first] focus on Greater Jakarta,” said Yuri.

Jakarta Governor Anies Baswedan has declared a two-week state of emergency in the capital and has urged offices to suspend operations as a COVID -19 containment effort, but questions persist over whether companies would comply with the directive given the lack of enforcement.

Anies urged Friday that all corporations close down their offices and operational facilities and arrange for their employees to work from home for the next two weeks. The governor said all entertainment venues would be closed starting Monday, following the closure of tourist spots last week. Passenger numbers and operational hours of public transportation would also be limited.

Jakarta is now the epicenter of the outbreak in the country, with 307 confirmed cases and 29 deaths as of Sunday, although experts believe the real number could be higher since there is a lack of testing.

There are doubts, however, over whether companies would comply with what Anies described as an “appeal” to all stakeholders to have “the moral responsibility” of helping to suppress the spread of the deadly virus.

A number of regional leaders have started to enforce a work-from-home (WFH) policy that would begin on March 23 and last 14 days until April 5. However, the policy is likely to get extended as the National Disaster Management Agency (BNPB) issued Decree No. 13 A/2020 prolonging the COVID-19 emergency status that was supposed to end on Feb. 29 until May 29 because of the rising number of infected cases.

The WFH policy has shifted consumer behavior from making purchases at shopping centers to online, increasing demand for logistics services, especially for food and beverages. However, the sales increases from online purchases have not offset the number of traditional sales, despite shopping centers having formed partnerships with online marketplaces.

According to Indonesian Shopping Center Tenant Association (Hippindo) chairman Budihardjo Iduansjah, the government needs to give support to the retail sector, especially in Jakarta, Bogor, Depok, Tangerang and Bekasi, because together the areas take a 50 percent share of the national retail market.

Banks have to suffer from falling credit growth and fee-based income amid the economic slowdown induced by the COVID-19 pandemic. Bank Indonesia has cut the benchmark interest rate by 25 basis points to 4.5 percent and revised its credit growth projection to between 6 and 8 percent from previously between 9 and 11 percent.

The credit growth projection revision follows the economic growth target that was revised from between 5 and 5.4 percent to between 4.2 and 4.6 percent. The pandemic has disrupted the economic supply chain, which lowers demand for credit. Furthermore, with a lower benchmark interest rate, banks’ net interest margins are reduced.

Banks have also revised their credit growth because of the changes in the economic growth projection. PT Bank Rakyat Indonesia, which previously set its credit growth target at 10 to 11 percent, is now calculating a more moderate target that might only be a single digit. The bank is focusing on distributing credit to small and medium enterprises, while trying to lower the growth of its credit for corporations.

The 45 stocks in the LQ45 index have together lost Rp 1.72 quadrillion (US$80.81 trillion) of market capitalization since January, falling 37.1 percent year-to-date to Rp 2.92 quadrillion from Rp 4.65 quadrillion. Most of the stocks now have price-to-earning ratios (PER) of below 10 times, some only one to four times, with price-to-book value (PBV) of zero to one time.

Analysts consider the LQ45 stocks valuation to have gone too low and recommend investors to start cumulative buying before the market rebounds. The fiscal, monetary and financial incentives offered by the government have not been effective in pushing up stock prices amid the negative sentiments caused by the COVID-19 pandemic. However, more stimulus and buyback programs from the state-owned enterprises are expected to support the capital market.

Instead of bearing operating costs, businesses prefer to close down their businesses from March 29 to April 5. However, the businesses would still have to pay employee salaries and rent. Therefore, Hana hopes that the government could give them tax breaks.

The cinema industry has also closed down temporarily. Although cinemas have been checking all customers for their temperatures when entering the premises, stopping operations was inevitable. They are refunding tickets that customers have already purchased.

President Joko “Jokowi” Widodo has rallied ministers and regional administrations to refocus their budgets on health care, the disbursement of social funds and economic stimuli as economists call for a flexible state budget to help the country cope with the COVID-19 pandemic.

The government is to reallocate Rp 62.3 trillion (US$3.9 billion) of state spending from the 2020 budget to carry out the President’s instructions for tackling COVID-19, Finance Minister Sri Mulyani Indrawati said after the Cabinet meeting.

The allocated sum is a significant increase from the previous estimate of Rp 27 trillion – on top of the Rp 120 trillion of stimulus packages – as the government prepares for worst-case scenarios, including the possibility of zero percent economic growth, ministers said.

The government’s baseline scenario had been for Indonesia’s gross domestic product (GDP) to grow more than 4 percent this year, Sri Mulyani said. Under the assumption that the pandemic would last for six months, that global trade would slump by 30 percent and that the country would go into lockdown, economic growth could fall to between zero and 2.5 percent, she added.

Sri Mulyani asked ministries to delay big-check spending to allow more room for fiscal intervention in light of uncertainties surrounding the pandemic this year. The Finance Ministry would move quickly to facilitate other ministries’ spending priorities, she added.