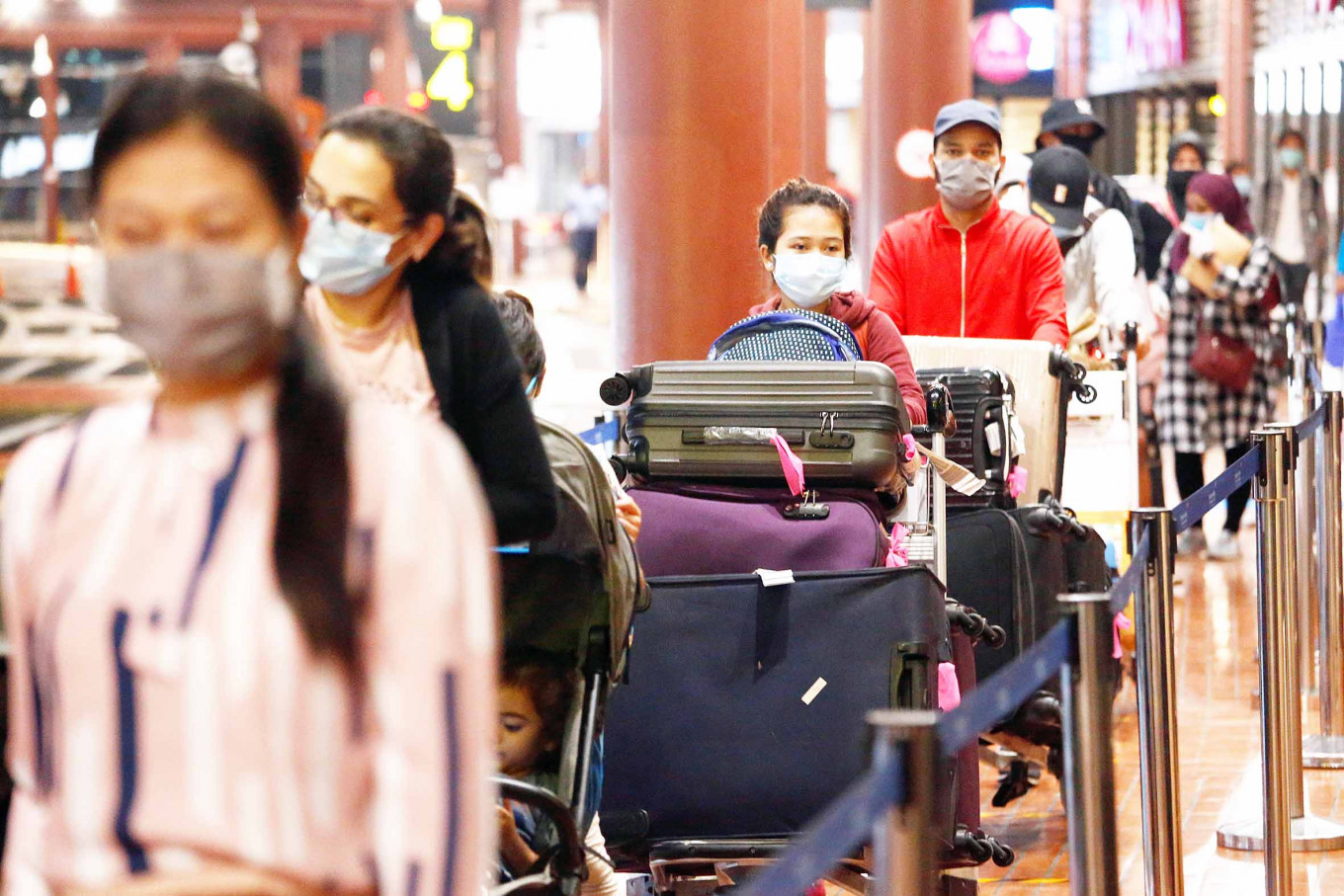 Passengers maintain a safe distance while in line for their health and immigration check at Soekarno-Hatta International Airport in Tangerang, Banten. (Reuters/Ajeng Dinar Ulfiana)

As Indonesia now leads the tally of COVID-19 cases and fatalities in Southeast Asia, with the total number of confirmed infections nationwide reaching 41,431 with 2,276 deaths as of Wednesday, it appears to be showing an interest in following steps taken by its neighboring countries to ease cross-border travel restrictions.

The country has now begun easing restrictions and is seemingly looking into creating a “travel bubble”, which refers to an agreement wherein countries that are successfully containing the outbreak can open their borders to each other to allow free movement within the bubble.

Earlier this month, Singapore said it would announce a "fast lane" arrangement with China, while Thailand was in talks to create travel bubbles for tourism that would allow the quarantine-free flow of people between Bangkok and a few cities in China, Japan, South Korea and Vietnam.

Foreign Ministry spokesperson Teuku Faizasyah said Indonesia was paying close attention to such a trend, but officials were still discussing ways to have such a "travel corridor". The Office of the Coordinating Maritime Affairs and Investment Minister has been discussing the issue with the Foreign Ministry, as well as the Tourism and Creative Economy Ministry, with an official saying that they had specifically looked to China, South Korea, Japan and Australia to boost Indonesia’s tourism recovery.

“The four countries were chosen because many tourists and foreign investors in Indonesia come from those countries,” the office’s undersecretary for tourism and creative economy, Odo Manuhutu, said on Friday.

Epidemiologist Dicky Budiman said, however, that Indonesia was not up to par with China, Australia, South Korea and Japan in terms of its COVID-19 response, let alone creating travel corridors. "The idea of travel bubbles, or COVID-19 corridors, is actually opening borders or entrances between countries that are equal in terms of pandemic control while having strong economic and tourism relations. There's a certain level of trust there," he said on Tuesday.

Though the preliminary stages of the regional head elections (Pilkada) began on Monday, their implementation is shrouded in uncertainty as issues persist over the budget and regulations. The uncertainty reflects the government and House of Representatives’ lack of seriousness in holding the elections safely amid the COVID-19 pandemic.

In order to guarantee that the preliminary stages are held in accordance with COVID-19 health protocols, the General Election Commission (KPU) and the Elections Supervisory Agency (Bawaslu) proposed an additional budget of Rp 5.2 trillion. In a meeting between House Commission II overseeing home affairs and election organizers, an agreement was made to realize the additional budget of Rp 1.02 trillion. Meanwhile, the next phase of realizing the budget target is to be discussed no later than June 17.

“Until now [the budget] is not available. There is still a rather complicated administrative process. It is likely that the revision of the budget execution list will take place tomorrow [Thursday], as soon as the additional budget is approved by the Finance Ministry,” KPU commissioner Pramono Ubaid said on Wednesday.

Bawaslu member Fritz Edward Siregar added that the additional budget for the Bawaslu had not yet been disbursed. The Bawaslu requires an additional Rp 478.9 billion, which will be used to procure equipment to meet COVID-19 health protocols as the next Pilkada preliminary stage, namely factual verification of individual candidates, will begin on June 24.

Though the government’s decision to postpone the deliberation of the controversial Pancasila guidelines bill has been welcomed, it is still deemed not enough to calm the public. A number of groups were of the opinion that there was no reason for this bill to be discussed ever.

Indonesian Ulema Council (MUI) advisory council deputy Azyumardi Azra has asked the public not to be careless concerning these matters as there has been a tendency for discussions to carry on once protests have subsided.

“We have to stand guard and continue to observe [the bill]. We cannot let the bill suddenly become legalized,” Azyumardi said in a virtual press conference on Wednesday.

Azyumardi cited the enactment of Law No. 19/2019 concerning the Corruption Eradication Commission (KPK). At the time, the House of Representatives and the government had discreetly continued to discuss the revision of Law No. 30/2002 and then passed the law despite strong opposition from the public. “Therefore, I think we have an obligation to continue overseeing [the Pancasila guidelines bill],” Azyumardi added.

As schools in “green zones” (free of COVID-19) are allowed to reopen ahead of the new school year and conduct regular face-to-face instruction in accordance with COVID-19 health protocols, parents may still refuse to let their children attend if they deem it unsafe.

“Currently, teaching and learning activities are adjusted according to the conditions found in each region. Therefore, parents are justified for disallowing their children from attending school,” national COVID-19 task force chief Doni Monardo said in a hearing with House Commission X on Wednesday.

Furthermore, he said that only about 6 percent of the total number of students in Indonesia would be allowed to attend schools that will reopen in July.

Separately, the Education and Culture Ministry emphasized that distance learning was not the same as online learning. According to the ministry’s early Childhood and Community Education Directorate General, online learning was characterized by the use of video conferencing applications, such as Zoom or Google Meets, and that both teachers and students can take advantage of learning features provided by the ministry.

As for distance learning, or offline learning, the ministry explained that this method was intended for students and teachers who had difficulty in accessing the internet, did not have the appropriate devices and were still not trained to integrate online learning materials.

A recent study by the Corruption Eradication Commission (KPK) shows that poor management, including a lack of coordination and ineffective financial management, is hampering Indonesia’s research and development (R&D) efforts.

The KPK found that Indonesian researchers did not use their research funds effectively, particularly researchers at universities, community cooperation and empowerment institutions (LKPM) and government research institutions at ministries, state agencies and regional administrations.

Many of the products that were produced from research and supporting facilities were nonaccountable, especially university research products, the findings revealed. Furthermore, the antigraft agency had received many reports on fictitious and overlapping research projects, as well as large amounts of unused research funds.

“For the KPK, it was important to study the research sector, as there are many research institutions across ministries, agencies and regional administrations [that have no] coordination. They are widely scattered and unorganized, without any direction on Indonesia’s research focus,” KPK commissioner Nurul Ghufron said at a press conference on Tuesday.

He added that the lack of coordination hampered the process of approving proposed research budgets and that the absence of a coordinating body meant that the nation's research efforts had no clear direction.

Publicly listed Bank Bukopin (BBKP) plans to hold a general shareholders meeting on Thursday, during which shareholders will decide whether to inject fresh capital or allow Kookmin Bank of South Korea to increase its ownership in the bank from 22 percent to over 51 percent.

The Financial Services Authority (OJK), through a letter dated June 16 signed by OJK banking supervision executive director Heru Kristiyana, has given the greenlight for Kookmin to control more than 51 percent shares at BBKP. However, the plan needs to be approved by shareholders as Kookmin wanted to do it through private placement, not a rights issue, at the price of Rp 180 per share.

The decision would be in the hands of state-owned lender Bank Rakyat Indonesia as Bosowa Corp., the current controlling shareholder of BBPK with 23.39 percent, and Kopelindo, another BBKP shareholder with 5.26 percent shares, had entrusted BRI to represent them. Another decisionmaker is the State-Owned Enterprises Ministry representing the government, which owns 8 percent shares in BBKP.

Erwin Aksa, chief commissioner of Bosowa, said Kookmin could not increase its shares at BBKP through private placement without shareholder approval because it would be against the Limited Liability Law.

Commercial banks are cutting their deposit rates as they face problems in extending loans to corporations impacted by the COVID-19 pandemic. This will likely drive big depositors out of banks and instead place their funds in instruments offering better returns such as bonds.

In June, bank deposit rates for one-month to one-year placement range from 4.51 to 6.29 percent per annum, down from 5.72 to 6.73 percent in the first quarter of this year. State-owned Bank Mandiri, the country’s largest lender by assets, has announced that it will cut deposits rate to 4.24 to 5.25 percent per annum for deposits in the rupiah and 0.4 to 1.25 percent for deposits in foreign currencies.

Bina Nusantara University banking analyst Dody Ariefianto said banks with high liquidity had no other choice but to cut rates as they could not extend more credit to corporations as a result of the pandemic.

The Indonesian government is issuing global Islamic bonds (sukuk) totaling US$2.5 billion to finance this year’s budget deficit. To date, the orderbook has increased by 6.7 times, reaching $16.66 billion from both local and global investors.

The underlying assets for the sukuk are national assets, including land and property accounting for 51 percent and the government's 2020 projects as the remaining 49 percent. Based on the investors' profile, this sukuk is mainly aiming for global sharia investors, followed by Asian investors.

The government claimed the rates the sukuk carried were the lowest coupons it had issued. For the 30-year series, the amount is the largest ever issued by an Asian country. Furthermore, all series have been rated Baa2 by Moody's Investor Service, BBB by S&P Global Ratings Services and BBB by Fitch Ratings.

According to Statistics Indonesia (BPS), the number of informal workers as of February reached 70 million people, or 56.5 percent of Indonesia’s total workforce.

Center for Reforms on Economics (CORE) Indonesia executive director M. Faisal said that even without an economic crisis, the increase of workers in the informal sector was higher than that in the formal sector.

Valuation, entry point and market knowledge are key in strategies for investing in stocks during volatile times as COVID-19 risks will likely persist throughout the year, fund managers and brokerages have said, expecting a drop of 15 to 20 percent in benchmark stock prices this year.

Lilis Setiadi, president director of major Indonesian fund manager Batavia Prosperindo Aset Manajemen, said that virus-related matters would continue to cause a lot of volatility in the country’s capital market, at least until the discovery of vaccines.

Steep falls in domestic stocks this year had been unprecedented, with the local stock index falling into a bear market sooner than previous declines, which were more gradual, Indonesia Stock Exchange (IDX) development director Hasan Fawzi said during the webinar.

During this year’s first quarter, the JCI fell 37.33 percent to a historic low of 3,937.63 on March 24, the lowest it had been since 2012. From that lowest point, the index rallied 26.67 percent to 4,987.78 at the end of Wednesday’s trading. The accumulated fall throughout the year was recorded at 20.82 percent, whereas the market gained 10 percent in the past month, indicating high volatility.

“This is like a discount in the stock market,” said Irwanti, investment director of Schroders Indonesia, which had Rp 61.1 trillion in assets under management as of the end of May. “If you invest in the future, if you look far into the horizon, you shouldn’t be afraid [of short-term volatility].”

The stock market still offered bigger returns in comparison to other assets, such as property, gold and time deposits, she added. For this year, Schroders did not have an official JCI target set out given the high market volatility, however Irwanti estimated a best-case scenario of the stock index losing 15 percent this year.