Epidemiologists say transitional PSBB period in Jakarta must be extended 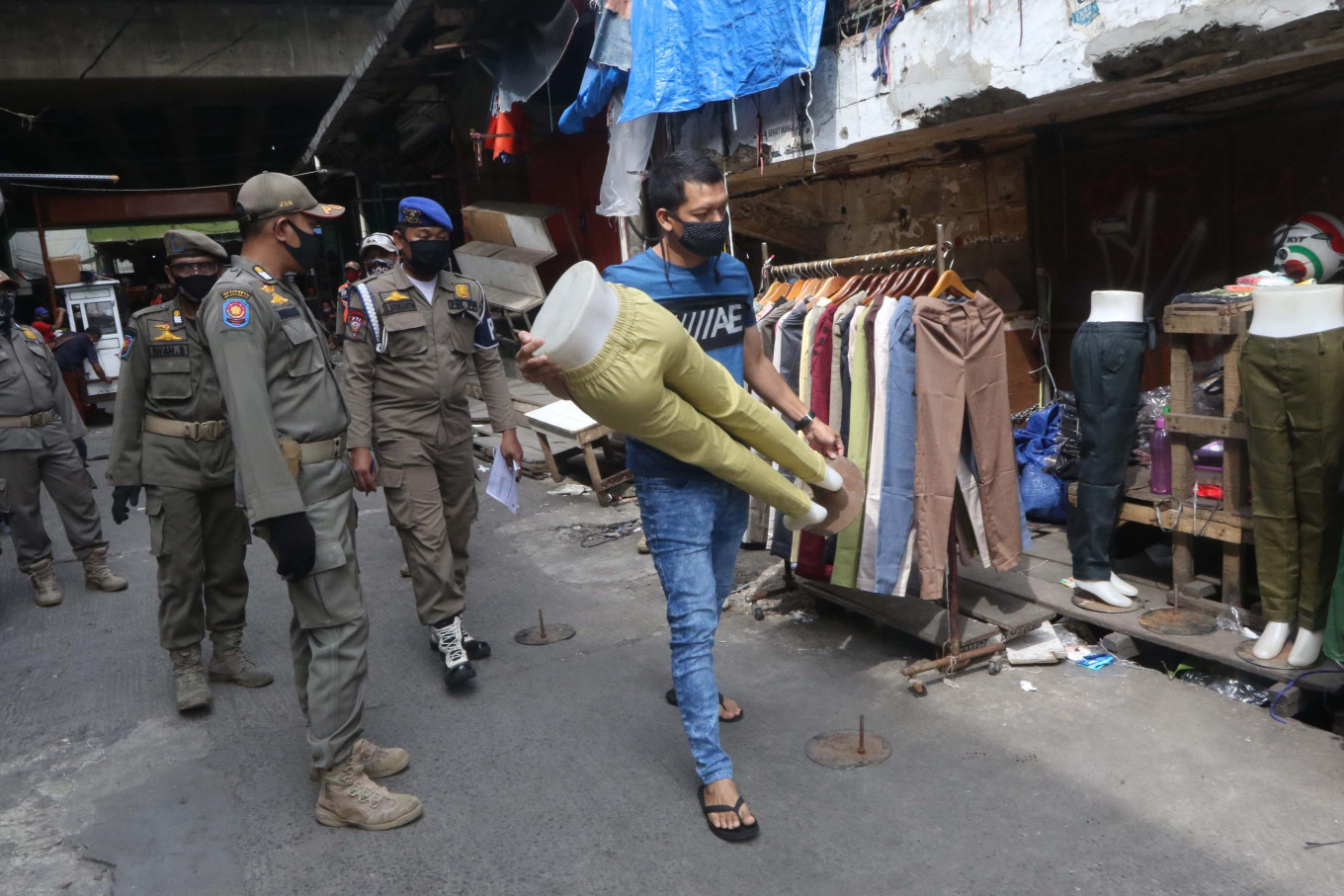 Public Order officers tell traders at Tanah Abang Market to close their stall to adhere to the large-scale social restrictions (PSBB). On Thursday, Jakarta Governor Anies Baswedan decided to extend the PSBB but at the same time ease some of the restrictions. (JP/Dhoni Setiawan)

Epidemiologists from the University of Indonesia’s (UI) health faculty have stated that COVID-19 conditions in Jakarta are worsening. Experts have suggested that the transitional large-scale social restrictions (PSBB) period, which ends today, must be extended.

“Our team provides input to the Jakarta administration every Monday. In last Monday’s analysis, COVID-19 conditions in Jakarta had not improved and had, in fact, worsened,” said epidemiologist Iwan Ariawan on Wednesday.

In extending the transitional PSBB period, Iwan advised that the implementation of health protocols be monitored more systematically. Moreover, he added, case tracking and isolation of confirmed carriers must also be improved.

A new regulation signed by President Joko "Jokowi" Widodo has created a new position of undersecretary responsible for performing intelligence work related to the state apparatus within the State Intelligence Agency (BIN) structure.

Enacted on July 20, Presidential Regulation (Perpres) No. 79/2020 on BIN replaced a previous regulation issued in 2012 on a similar matter.

According to Article 28 of the new regulation, the undersecretary for the "Apparatus Security Intelligence" department, will be responsible and answer directly to the BIN chief.

“[The undersecretary] will draft regulations and implementations for activities and/or the operation conducted by the Apparatus Security Intelligence,” the article reads.

Prosecutor that allegedly met with Djoko Tjandra must be dismissed: MAKI
Kompas (https://tinyurl.com/y6abv6e2)

The Indonesian Anticorruption Community (MAKI) has urged the Attorney General’s Office (AGO) to dismiss the prosecutor who allegedly met with graft convict and fugitive Djoko Tjandra.

“Sanctions are not enough, [the prosecutor] should be dismissed from the prosecutor’s office,” said MAKI coordinator Boyamin Saiman through a written statement on Thursday.

A photo of the prosecutor, Pinangki Sirna Malasari, with someone suspected to be Djoko and his lawyer Anita Kolopaking, previously circulated on social media. The meeting allegedly took place in Malaysia.