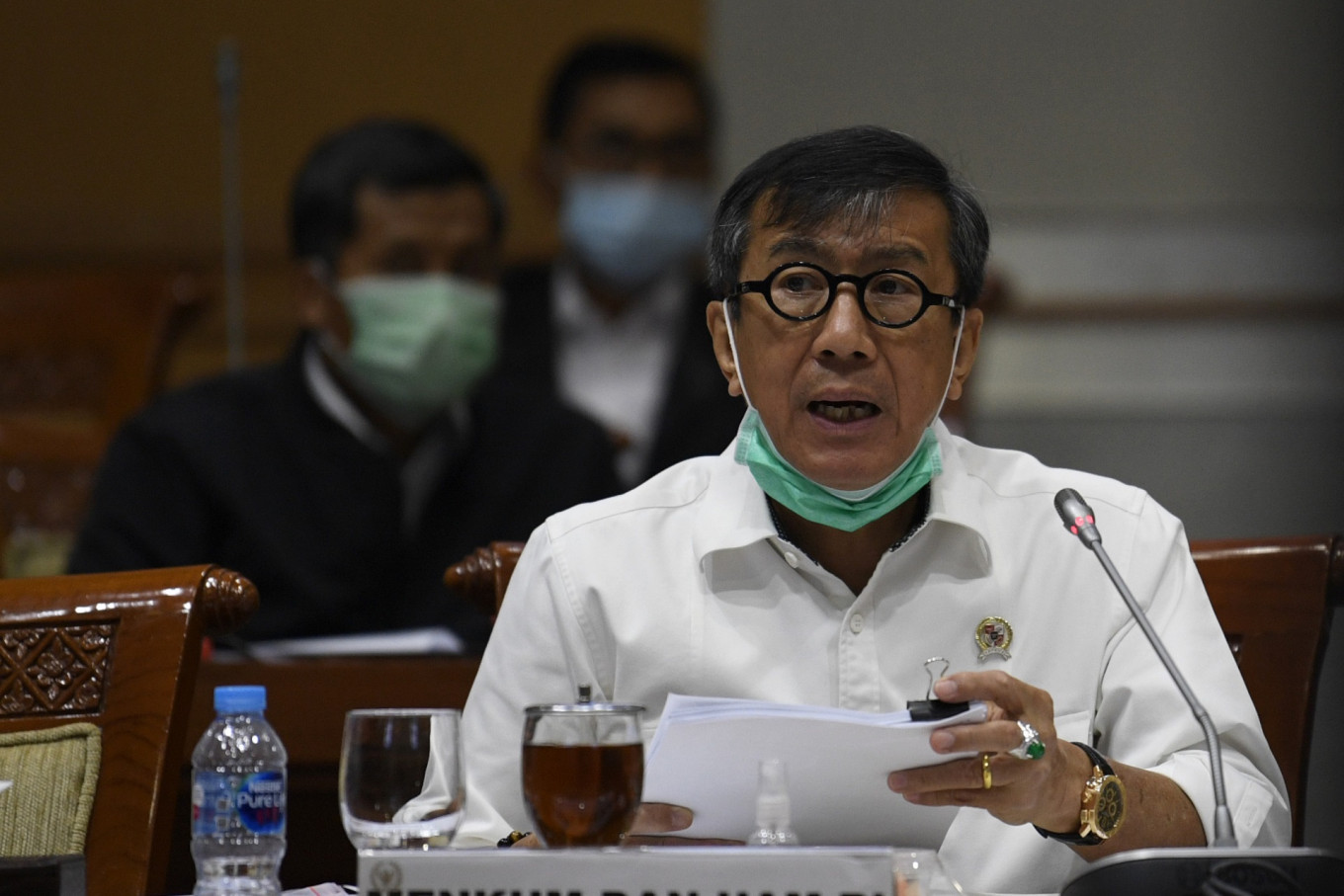 The House of Representatives and central government have concurred to pull out as many as 16 bills from this year’s National Legislation Program (Prolegnas), despite the fact that some of the removed bills are deemed urgent and must be immediately legalized. Furthermore, the decision to replace the removed bills with a number of new bills in the Prolegnas has stirred up questions over the House and government’s basis for evaluating the Prolegnas.

The decision to evaluate the Prolegnas was made during a meeting between the House Legislation Body (Baleg) and Law and Human Rights Minister Yasonna Laoly on Thursday. Prior to the House and the government’s evaluation, the Prolegnas consisted of 50 bills. Now, however, 16 bills have been pulled out from the list, two of which have been replaced. The House and the government also agreed to add three bills to the list, namely the national development planning system, judges and prosecutor bills.

While the COVID-19 pandemic has been touted as the main reason behind the removal of numerous bills from the priority list, both Baleg and Yasonna did not offer any explanation as to why they added new bills to the list.

The preemployment card committee has suspended the sale of course bundles offered by partnered learning platforms as of Tuesday after discovering lapses in accountability.

However, the program committee found that the bundles offered no mechanism to ensure that buyers actually completed the courses in the package before they received cash incentives.

“There are no reports on participants’ assessments of instructors, the training platforms or the classes in the bundle itself,” the committee wrote in a circular on Tuesday, a copy of which was obtained by The Jakarta Post. The committee added that the issue had prevented the program management from evaluating the classes.

Preemployment card program spokesperson Panji Winanteya Ruky confirmed the suspension of the course bundles. However, he asserted that the suspended packages made up only a small part of the training programs offered.

Several House of Representatives members have scrutinized a large number of police officers who are posted in strategic positions outside the police force, such as commissary posts in state-owned enterprises (BUMN).

Desmond explained that the prohibition of police officers’ holding dual posts was regulated by the National Police Law’s Article 28, in which it is stipulates that police officers could be employed in other institutions only after they resigned or retired from the police force.

Desmond feared that the large number of police officers holding civilian jobs would not only take the country back to its pre-reformation era but also affect the police’s professionalism and incur unnecessary expenditure.

The West Java administration has decided to extend the imposition of large-scale social restrictions (PSBB) proportionately in Bogor, Depok and Bekasi for the next two weeks. Regardless, city administrations have been granted some flexibility in imposing the PSBB, including in easing the restrictions and allowing certain activities in some regions in anticipation for the new normal.

Other cities across West Java ended their PSBB implementation on June 26. However, Bogor, Depok and Bekasi will continue imposing the policy due to their close proximity to Jakarta.

Bekasi regency’s spokesperson for COVID-19-related matters, Alamsyah, said Bekasi’s decision to extend PSBB imposition was in line with West Java Governor Ridwan Kamil’s recommendation. Ridwan, according to Alamsyah, had also recommended regional administrations in West Java to allow the resumption of activities in certain sectors while the PSBB’s imposition was being extended.

Similar to Bekasi, Bogor administration will also allow the resumption of some activities despite the extension of PSBB in the region. App-based ojek (motorcycle taxi) drivers, for one, can transport passengers again. The ban on wedding receptions and seminars has also been lifted, on the condition that health protocols are strictly enforced.

For years, media coverage of Papua has straddled narratives on politics, natural resources management, human rights, development and national security, attracting attention from around the world. However, there is one issue that is still rarely discussed in public – the casual racism experienced by native Papuans in their day-to-day lives.

Discussions on racism in Papua have flourished in online seminars and on social media following the death of black American George Floyd, which galvanized the #BlackLivesMatter movement in the United States, which rippled across to Indonesia. A number of local groups began to discuss racism in the country by campaigning that #PapuanLivesMatter too.

Efforts to end years of racism against Papuans have not progressed fast enough, activists have bemoaned, but they believe the growing debate and sense of solidarity with the minority could be a good opportunity for change.

“Racism has been happening for decades in Papua, but these discussions can be a positive start, as more and more people start to recognize these public issues and start addressing the problem,” Elvira Rumkabu, an international relations lecturer at Cenderawasih University, said on Sunday.

Elvira said people had been reluctant to discuss issues related to Papua, mostly due to the running narrative that there are only two sides of the equation: Separatism or the undisputable Unitary State of the Republic of Indonesia (NKRI).

“That’s the only narrative we have been fed. It has framed the discussion in a way that snuffs out any necessary debate on humanity. There is a fundamental human issue here that must be addressed; discussing Papua is discussing humanity,” she said.

The Financial Services Authority’s (OJK) credibility and performance have been under the scrutiny of many parties, including President Joko “Jokowi” Widodo, who has considered issuing an emergency decree to return banking regulation to the central bank’s remit.

Sources told Reuters that President Jokowi has been considering returning the role to Bank Indonesia (BI) due to dissatisfaction about the OJK’s performance during the pandemic.

BI acted as regulator and supervisor of banks in Indonesia until the end of 2013 when the OJK assumed the role. The OJK was established under the 2011 OJK Law to oversee financial institutions. It was modelled on Britain’s then-financial services regulatory structure.

One of the sources said that President Jokowi is now looking at the French model, which has an independent administrative authority under the central bank, which oversees banking.

Gerindra Party legislator Heri Gunawan, from House of Representatives’ financial commission, confirmed that the government had asked the House to include an amendment of the 1999 BI Law in this year’s legislative priority. The House’s Legislative Body (Baleg) deputy chairman, Achmad Baidowi, said that the BI law amendment would become the initiative of the House.

Rosan suggested that the government guarantee around 80 to 90 percent of the loans with banks covering the rest. Also, he said, the government’s placement of funds in four state-owned banks should be followed by banks extending loans to businesses with low interest rates.

“Most importantly, implementation must be quick. Do not let business that experience temporary paralysis become permanent. The government’s presence in the rescue program must be as quick as the President ordered,” he said.

Meanwhile, Financial Services Authority (OJK) public relations and logistics deputy commissioner Anto Prabowo has asserted that the OJK will support the banks in extending working capital loans to the real sector, noting that they had enough liquidity to support the sector, which has the capacity to absorb the loans.

Reforms needed to get Indonesia out of middle-income trap
Kompas, headline

Indonesia, according to the World Bank, is currently at the lower end of the upper-middle-income country group, with income per capita of over $4,000. It needs reforms in all sectors to get the country move up the ladder so that it is not stuck in the middle-income trap.

Yose said that Indonesia’s new status as an upper-middle-income country meant that it would no longer be eligible for some benefits offered by developed countries, such as the generalized system of preferences (GSP) offered by the European Union and the US.

Therefore, he said that Indonesia had no other choices than to pursue reforms in all sectors to make the country more competitive in the international market.

The government has unveiled a new rule to guarantee working capital loans for micro, small and medium enterprises (MSMEs) in a bid to boost credit disbursement from banks, as risk aversion increases amid the COVID-19 pandemic.

The government has allocated Rp 12 trillion (US$839.07 million) to guarantee working capital loans, which consists of Rp 10 trillion for guarantee services and another Rp 2 trillion in reserves.

Finance Minister Sri Mulyani Indrawati said the government would soon implement the insurance scheme, adding that the policy was aimed at pushing banks to channel more loans to MSMEs whose businesses have been heavily disrupted by the pandemic.

“Risk aversion is exactly what is happening now as banks and businesses do not want to restart the working capital disbursement after debt restructuring,” Sri Mulyani said. “The economy will not grow if they wait for all the restructuring processes to be completed, which will take months.”

The government has allocated Rp 695.2 trillion to fight the health and economic impacts of the pandemic, of which Rp 87.55 trillion will be allocated to health care, Rp 203.9 trillion to strengthening social safety nets and Rp 123.46 trillion to incentives for MSMEs.