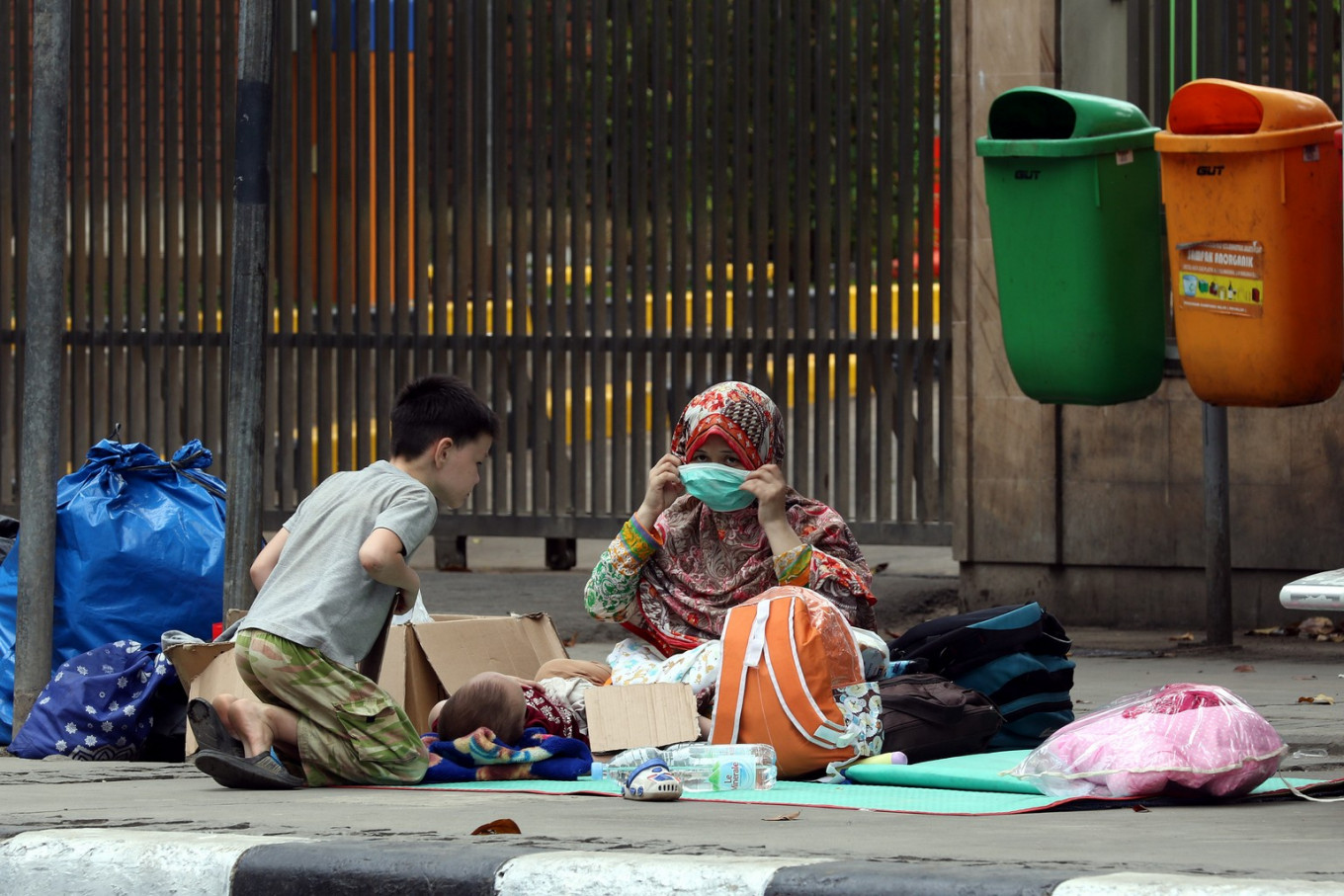 Refugees tend to a baby on a sidewalk in Kebon Sirih, Central Jakarta, on July 5, 2019. Lacking the money to rent accommodation, they are forced to live on the street. (JP/Dhoni Setiawan)

The policy inconsistency policies and citizens’ lax discipline in implementing the health protocols have widened the areas in Indonesia affected by COVID-19, with the disease now found in 439 regencies and municipalities across the country.

Yurianto reasserted that the health protocols, including hand washing, physical distancing and wearing face masks, were compulsory during the country’s transition to the “new normal’.

Meanwhile, observers at a discussion held by Syndicate Forum said that public disobedience was in part due to the government’s inconsistent policies. “[Public disobedience is caused by] the flip-flopping policy and [the government’s] reliance on buzzers,” said public policy observer Agus Pambagio, referring to the Indonesian term for social media influencers. “People have become neglectful because there are no concrete sanctions [for violating the health protocols]. They are also tired,” he added.

The government announced 862 new COVID-19 cases on Sunday, which brought the cumulative total to 45,891 cases. It also announced 36 additional deaths to bring the death toll to 2,465, and a cumulative total of 18,404 recovered cases.

A coordinated campaign capitalizing on the fear of communism run by Muslim organizations and Islamist political parties at the House of Representatives has successfully blocked the deliberation of the Pancasila Ideology Guidelines (HIP) bill, which had been proposed by the nationalist Indonesian Democratic Party of Struggle (PDI-P).

On Tuesday, the government of President Joko “Jokowi” Widodo halted deliberation of the HIP bill, which aims to regulate the values of the state ideology and the functions of the Agency for Pancasila Ideology Education (BPIP) led by PDI-P chairwoman and former president Megawati Soekarnoputri.

Nahdlatul Ulama (NU) and Muhammadiyah, along with the Indonesian Ulema Council (MUI), led the campaign to stop the House’s deliberation of the HIP bill, which they fear could lead to the reemergence of communism in the country.

The bill’s provisions reduce the five principles of Pancasila to a Trisila (three principles) of socionationalism, sociodemocracy and cultural divinity under an Ekasila (one principle) of gotong royong (mutual cooperation). As founded, Pancasila comprises a belief in one God, a just and civilized humanity, the unity of Indonesia, democracy by consensual deliberation and social justice for all.

Secretary-general Arsul Sani of the United Development Party (PPP), a party with a majority Muslim base, hascalled for the bill to consider the inclusion of existing regulations that ban communism. Other political parties such as Golkar and NasDem have also stated that they would only take part in deliberating the bill if the 1966 anticommunism decree were included. The Democratic Party, the Prosperous Justice Party (PKS) and the National Mandate Party (PAN) also strongly oppose the bill.

The Corruption Eradication Commission (KPK) in December 2019 named Nurhadi, Rezky and Hiendra as bribery suspects in a civil suit that PT MIT filed against PT Kawasan Berikat Nusantara involving an internal shares dispute at PT MIT, as well as in a land dispute cassation and case review.

Ratifying the data protection bill (PDP) has been deemed necessary to prevent leaks of citizens’ personal data. The House and the government aim to finish deliberating the bill this year.

Responding to an alleged breach of COVID-19 patient data, House Commission I member Sukamta said that the PDP bill should be deliberated as soon as possible, saying that the Electronic Information and Transactions Law (UU ITE) was insufficient to protect personal data.

Sukamta also urged the government, particularly the Communications and Information Ministry and the National Cyber and Encryption Agency (BSSN), to investigate the case.

KPU under pressure as regional polls near
The Jakarta Post, p.2

The General Elections Commission (KPU) is under pressure to procure all necessary health equipment and to apply strict health protocols for the 2020 simultaneous regional elections, which the government has insisted on holding despite the COVID-19 epidemic.

Pressures increased on the commission after the House and the government decided in late May that the 2020 regional elections to elect 270 regional leaders would be held on Dec. 9, even though the epidemic showed no signs of subsiding.

The commission has since been drafting a new KPU regulation (PKPU) that lists the mandatory health protocols for election officers, candidates and voters at all stages of the elections, from the preparations starting this month through to the final vote count a week after voting day.

Procurement of PPE such as face masks, hand sanitizers, face shields and gloves for KPU officers can commence once the regulation is in force. But the KPU has yet to issue the regulation because the prevailing Regional Elections Law obliges it to consult the House on every draft regulation prior to their issuance.

In anticipation of possible delays in PPE procurement due to the uncertain outcome of the PKPU’s approval process, the commission issued a circular on Friday that instructs every regional KPU officer to wear whatever PPE they had at home in carrying out the candidate verification on June 24, even if they had only a face mask or gloves.

Critics have urged policymakers to push back the elections to 2021 over fears that the outbreak could continue late into the year or beyond, and put voters and election organizers at risk of contracting the disease. They have also warned about the possibility of low voter turnout during the epidemic.

The Indonesian economy faces gloomier skies this year as the COVID-19 pandemic has yet to show any signs of subsiding, forcing government officials, the central bank, economists and international institutions to project weaker and weaker growth as the outbreak unfolds.

The Asian Development Bank (ADB) projected Indonesia’s gross domestic product (GDP) to shrink 1 percent this year, the weakest since the 1998 Asian financial crisis as the coronavirus pandemic has inflicted a “significant economic disruption” in the country. The forecast is a down revision from 2.5 percent growth it projected in April, according to the ADB’s Asian Development Outlook Supplement.

The government has allocated Rp 695.2 trillion (US$49.63 billion) in funds, the latest increase from the previous allocation of Rp 677.2 trillion, for health care and the economic stimulus package to soften the outbreak’s impact.

The economy grew 2.97 percent in the first quarter this year as household spending and investment growth plunged, dragging down the country’s economy to its weakest growth since 2001 as it began large-scale social restrictions (PSBB) to curb the spread of the virus.

The Financial Services Authority (OJK) issued Circular No. 3/SEOJK.04/2020 on Mar. 9 allowing issuers to buy back their shares without approval from a general shareholders meeting (RUPS). The relaxation was expected to push up the Jakarta Composite Index (JCI) that had crashed by up to 18.46 percent at the time. However, issuers that had reported their plan to buy back their shares have cancelled the plans for several reasons.

State-owned diversified mining company PT Aneka Tambang (Antam), for example, is not going to realize its buyback plan because its share price and transaction volume have risen. Antam corporate secretary Kunto Hendrapawoko said the company’s buyback budget of Rp 100 billion (US$7.11 million) would be directed toward operational needs and investments amid the COVID-19 pandemic.

The JCI has improved by 9.56 percent in the last month. The JCI closed in the green at 4,942 during Friday trading. PT Mega Anugerah Investama director Hans Kwee said buybacks were no longer waited for because the market was bullish, therefore, its impact on market fluctuation would be minimal.

The government has recently given a new stimulus to the capital market with the issuance of Government Regulation (PP) No.29/2020. According to the regulation, issuers with a minimum of 40 percent free float shares are given a 3 percent lower corporate income tax rate for three years until 2022.

Furthermore, the regulation stipulates that issuers that will buy back their shares no longer have to satisfy the requirement of having at least 300 shareholders that own below 5 percent of the shares each.

Meanwhile, the self-regulatory organization (SRO) in coordination with the Financial Services Authority (OJK), will eliminate the initial listing fee and provide a 50 percent discount on the annual listing fee for shares issued through equity crowdfunding (ECF).

According to Anugerah Mega Investama director Hans Kwee, the listing fee discount would incentivize issuers to conduct initial public offerings (IPO). As for the tax cut, the incentive will only work if there are signs of economic recovery. Otherwise, the companies will focus on surviving.

According to London Metal Exchange data, the nickel price has risen slowly to around US$12,000 per ton as countries relax restrictions after the rate of COVID-19 infection has slowed. Previously, the nickel price was in the $14,000 range at the beginning of the year before hitting $11,000 in March and April when the pandemic was at its peak.

Capital Future analyst Wahyu Laksono said the nickel price would not change much until the end of June, but it could reach $15,000 per ton in the second half. In addition to restriction relaxation, the positive sentiment that could push up the nickel price are the projections for electric vehicle (EV) development. Demand for EVs is predicted to rise after the pandemic is over, boosting nickel industry growth.

The Indonesian Chamber of Commerce and Industry (Kadin) said that distribution of the national economic recovery (PEN) program has been slow and recommended a strategy consisting of four breakthroughs to fasten the disbursement.

Kadin vice chairman Shinta W. Kamdani argued the slow distribution was mainly caused by the technical regulations of PEN disbursement. She also gave examples of tax relaxation that could be claimed by businesses only a month after the announcement, and corporate debt restructuring, which was slowed down banks that are worried about liquidity risks.

Therefore, Kadin recommended four breakthroughs to remove bottlenecks in the distribution. First, the government should complete and issue a technical regulation on the distribution after the announcement of the stimulus so that it could be implemented almost immediately.

“We understand that there is a concern about moral hazards if the stimulus is distributed directly to businesses from the government. However, other countries have avoided this risk by adopting breakthrough implementation mechanisms and have been successful in speeding up stimulus distribution,” Shinta concluded.