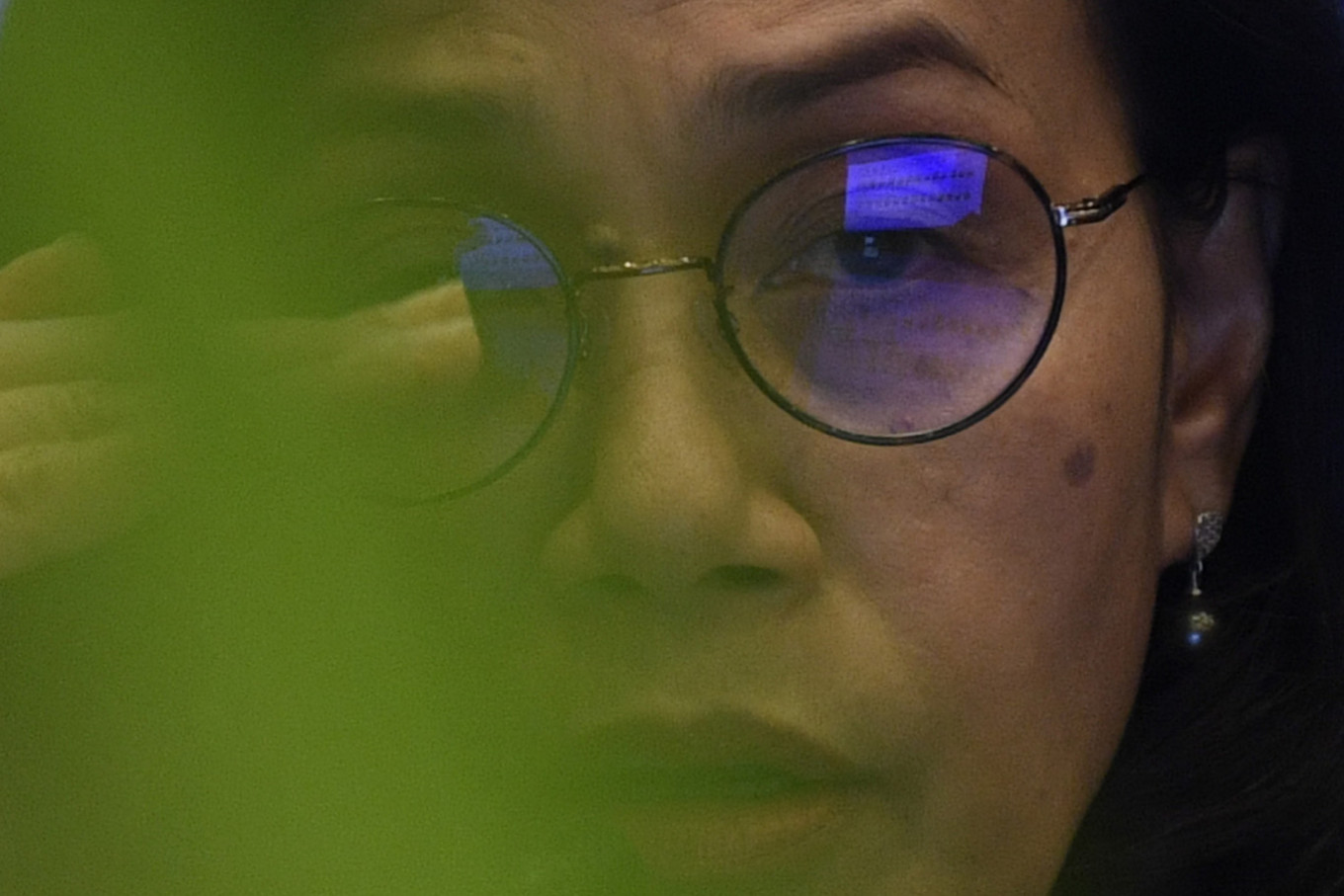 During a rally in Jakarta, a Transjakarta bus stop near Hotel Indonesia and a traffic police post near Tugu Tani, both in Central Jakarta, were set on fire, it is not clear by whom.

As tension mounts, dialogues between the House of Representatives and the public are strongly encouraged. A professor at Syarif Hidayatullah State Islamic University (UIN Jakarta), Azyumardi Azra, said President Joko “Jokowi” Widodo, as the initiator of the Job Creation Law, ought to invite key stakeholders protesting the law and hold a dialogue. This includes leaders of labor unions, Islamic organizations, university lecturers and professors.

“Holding dialogues is urgent since there is no longer trust [in the government],” said Azyumardi.

Executive director of think tank Regional Autonomy Watch (KPPOD), Robert Endi Jaweng, said regional administrations had not indeed exercised their authorities optimally. In terms of spatial planning, for instance, only 57 out of 548 regions have formulated a Detailed Spatial Plan (RDTR), which serves as business players’ reference in making investments.

Robert speculated that regional administrations might intentionally opt not to issue a RDTR as it would enable regional leaders to issue permits arbitrarily. However, according to Robert, the regional administrations’ flawed performance does not excuse the transfer of authorities to the central government, especially since the central government is also troubled by excessive bureaucracy.

Likewise, constitutional law expert Feri Amsari of Andalas University said the transfer of authorities from regional administrations to the central government was not in line with the country’s spirit of regional autonomy. The reduction of regional authorities, according to Feri, is a form of centralization. “Instead of taking over regional authorities, problems at the regional level must be addressed by correcting the existing system,” said Feri.

Two governors have sent a letter to President Joko “Jokowi” Widodo regarding labor groups’ demand for the nullification of the highly contentious Job Creation Law. West Java Governor Ridwan Kamil signed an official letter on Thursday which urged the President to pay heed to the labor force’s strong opposition to the omnibus law.

Other than Ridwan, Yogyakarta Governor Sri Sultan Hamengkubuwono X also sent a letter urging Jokowi to nullify the omnibus law following vehement opposition from labor groups in the region. “Labor groups asked me to convey their wishes by sending an official letter to the President, which I’ll accommodate,” said the governor.

Indonesia is in a race against time to contain the COVID-19 outbreak as patients overrun health facilities and medical workers are overwhelmed, but primary efforts to break the chain of transmission are still far from enough, epidemiologists have said.

Testing, tracing and isolation are key to containing COVID-19. Yet, these measures remain weak in Indonesia, largely because of limited testing capacity, an insufficient number of COVID-19 contact tracers and people’s reluctance to open up to these workers.

On Oct. 7, a total of 44,212 specimens from 32,167 people were tested, according to the Health Ministry. On the same day, the ministry recorded 142,213 suspected cases. No data is available on the number of probable cases. Suspected cases are those with acute respiratory illness who have recently traveled or been exposed to a confirmed case, while probable cases are suspected cases with severe symptoms clinically consistent with COVID-19.

Both still have no laboratory evidence, but probable cases also include those with inconclusive test results. Indonesia currently has 376 laboratories with a combined testing capacity of around 40,000 specimens in a day.

Masdalina Pane of the Indonesian Epidemiologists Association (PAEI) said that having a high number of suspected cases on the waiting list for diagnostic tests would definitely delay contact tracing, quarantine and treatment. She said health authorities should reduce testing turnaround times and deploy more tracers or use more volunteers for COVID-19 surveillance.

The House of Representatives is standing firm on its plan to raise the electoral threshold in 2024 despite concerns that the move would result in wasted votes and a loss of political representation, a lawmaker has said.

Raising the threshold would simplify the country’s multiparty system, which in turn could strengthen the presidential system, as mandated by the Constitution, said deputy chairman of House Commission II overseeing home affairs Saan Mustopa from the NasDem Party.

Saan said the House, however, also left open the possibility of adopting a threshold lower than 7 percent but higher than 4 percent depending on the result of future deliberation at the House. He did not mention whether the political parties that control small numbers of seats in the House, namely the Democratic Party, the National Mandate Party and the United Development Party (PPP), had agreed with the draft after opposing the higher threshold in June. The three parties previously argued that the plan would weaken their chances of gaining representation in the House in 2024.

According to Saan, Commission II had submitted the draft bill to the House Legislation Body (Baleg) in September for further deliberation, before it would be brought to the plenary session sometime next year.

The relaxation of outsourcing rules in the new Job Creation Law brings a breath of fresh air for investors. In Manpower Law No. 13/2003, outsourcing was limited only to supporting activities outside the core areas of businesses. However, the rule has been changed in the Job Creation Law, which allows outsourcing in the core business or production processes.

For businesses, outsourcing might be more efficient. Although it is more expensive, employers will no longer have to worry about upskilling their workers according to their needs. On the other hand, workers are concerned that widening the scope for outsourcing will eliminate permanent worker contracts and affect job security.

The government is currently preparing three to five government regulations, which are scheduled to finish by the end of October. These supporting regulations will provide guidelines for implementing the provisions laid out in the Job Creation Law.

The demonstrations against the Job Creation Law, which ended in riots, might negatively affect the Jakarta Composite Index (JCI). Moreover, some governors, including West Java Governor Ridwan Kamil and West Kalimantan Governor Sutarmidji, have taken an opposite stance from the central government.

There are also concerns that the demonstration could lead to new COVID-19 clusters, increasing the negative sentiment in the market. Infovesta Utama head of investment research Wawan Hendrayana predicts that there will be a rise in COVID-19 cases over the coming weeks, perhaps reaching around 5,000 cases per day. “The increase in COVID-19 transmission could be a negative catalyst for the JCI,” he added.

The financial market is currently also shadowed by the uncertainty surrounding the US presidential election, Brexit negotiations and the risk of a second wave of the COVID-19 pandemic.

However, progress on COVID-19 vaccine production, macro-economic improvement and issuers' financial statements could lead to positive sentiment in the market. Some analysts are still optimistic that the JCI will close at above 5,350 by the end of the year.

Absorption of the national economic recovery (PEN) program budget is hoped to increase household purchasing power in the fourth quarter. Besides, the positive effect of the Job Creation Law is hoped to improve the business climate and boost the JCI.

Government regulations (PP) for the labor and micro, small, and medium enterprises (MSME) clusters to implement the newly passed Job Creation Law are to be issued this month or in November 2020 at the latest. At least 153 foreign direct investment companies are ready to enter Indonesia.

Manpower Minister Ida Fauziyah explained that the implementing regulations for the Job Creation Law were now being drafted, and at least three to five PPs would be ready by November.

As directed by President Joko “Jokowi” Widodo, as Ida said, the drafting of the PPs for the labor cluster involves representatives of the labor unions and businesses, represented by the Indonesia Chamber of Commerce and Industry (Kadin) and the Indonesian Employers Association (Apindo).

The government is preparing Rp 75 trillion (US$5.1 billion) in capital for the nation’s sovereign wealth fund to attract investment and support the economy as global heavyweights from the United States to the United Arab Emirates have expressed interest to join.

Finance Minister Sri Mulyani Indrawati said Rp 30 trillion of the capital would be in cash, while the remaining would be in the form of state-owned enterprises (SOEs) shares and other state assets.

The fund is aimed at attracting Rp 225 trillion in investment, with foreign funds from the United Arab Emirates, Japanese conglomerate Softbank and the US International Development Finance Corporation (IFDC) already lining up to invest in the fund, officials said previously.

It remains unclear where the wealth fund will be invested, although Sri Mulyani mentioned a combination of development fund and stabilization fund. Officials have previously mentioned projects in sectors including infrastructure, health care, energy and resources, tourism and technology. Other sovereign wealth funds elsewhere invest in financial markets as well.

“We are currently formulating the government regulation as the President has asked to prioritize this,” Sri Mulyani told reporters on Wednesday. “We are hoping to get strategic and reputable partners so that we can develop the fund to better attract investment.”

The establishment of the sovereign wealth fund, which will be called the Indonesia Investment Authority, is included in the Job Creation Law.

The divestment of Vale shares is mandated by Vale’s latest contract of works signed in 2014. Under the contract, the divestment should be conducted within 5 years since the signing of the contract, but Value and MIND ID could only realize it on Oct. 7, 2020.

After the acquisition of Vale shares, Orias said, MIND ID as the holding mining company would push for synergies among state-owned mining companies to develop the downstream industries, especially for nickel, to produce stainless steels and lithium batteries for electric vehicles.