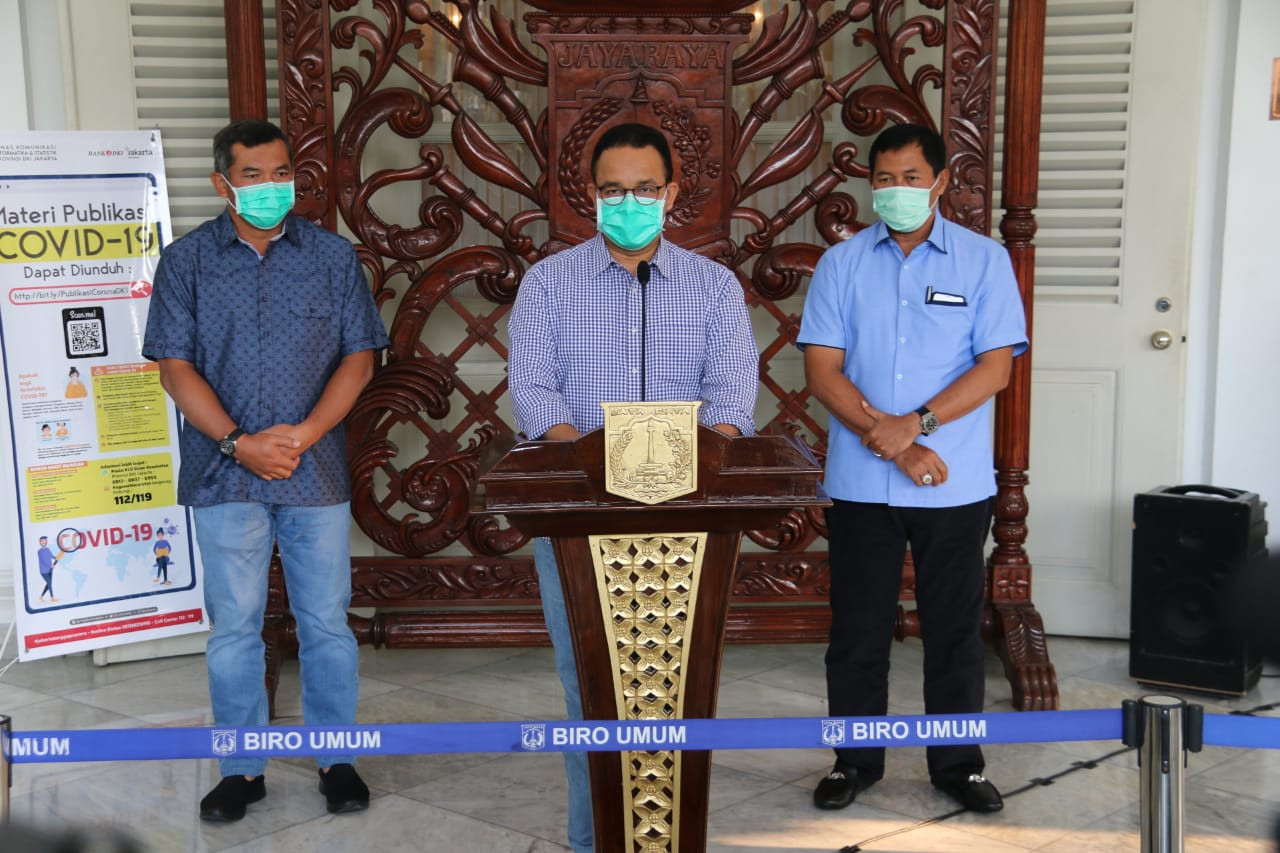 Following his decision to extend the imposition of the transitional large-scale social restrictions (PSBB) phase in the capital city, Jakarta Governor Anies Baswedan said he would focus on four specific policies in enforcing the transitional PSBB.

Anies, for one, will increase the Jakarta administration’s surveillance of crowded places, particularly wet markets and the Commuter Line (KRL). The governor plans to deploy military and police personnel to limit crowds in approximately 300 wet markets across Jakarta as well as the KRL. Anies will also end the odd-even policy for vendors in markets, although markets’ operational hours and the number of customers allowed in will be reduced.

Furthermore, Anies will not open schools in the near future as children are considered among the groups most vulnerable to contracting or transmitting COVID-19.

The governor also urged members of the public who want to take part in public protests to maintain physical distancing throughout their demonstrations. According to Anies, many demonstrators who took part in several protests in the past weeks had not maintained a safe distance from each other.

Lastly, Anies will suspend the weekly Car Free Day (CFD) on Jl. Sudirman and Jl. MH Thamrin in Central Jakarta due to concerns about packed gatherings as reported during the CFD on June 21. The city administration will instead allow pedestrians to exercise in 32 alternatives areas with strict health protocols in place.

Activists, survivors step up campaign for sexual violence bill after another delay
The Jakarta Post, (https://tinyurl.com/y7mfr52z)

Activists and victims supporting the sexual violence eradication bill (RUU PKS) have stepped up their online campaign to push for the bill’s passage after the House of Representatives announced yet another delay in the deliberation of the draft law that has been in limbo for about four years.

The hashtag #SahkanRUUPKS (pass the sexual violence eradication bill) is trending on Twitter and has taken over discussion on social media since Tuesday.

On Tuesday, Marwan Dasopang, the deputy chairman of House Commission VIII, which oversees social affairs, said there was a plan to exclude the bill from the priority list, because its deliberation was “too complicated”. The decision has angered women’s rights activists and sexual abuse victims who have been fighting for years for the bill.

The Legal Aid Foundation of the Indonesian Women’s Association for Justice (LBH APIK) found that fewer than 5 percent of recorded sexual violence cases have been legally processed.

Organizations within the Coalition for Safe Public Spaces (KRPA), which is part of the RUU PKS campaign team, created memes and videos to protest the House’s decision. PerEMPUan founder Rika Rosvianti, a member of the KRPA coalition said she hoped the campaign could raise awareness about the fact that the fight for the bill had been going on for years.

“Should the implementation of this program continue, its practice could potentially lead to violations of the law or corruption,” said Kurnia.

One of the program’s problematic aspects is the decision to put the program under the Coordinating Economic Ministry’s jurisdiction. This, according to the ICW, is not in line with the ministry’s roles and functions, saying that the Manpower Ministry should be responsible for the program instead.

The manufacturing industry showed improvement in production activities in June, following the decision by regional governments to relax the implementation of large-scale social restrictions (PSBB). According to a survey conducted by market consultancy firm IHS Markit, Indonesia’s manufacturing purchasing manager index (PMI) in June rose to 39.1, from 28.6 last month, albeit still in the contraction territory. Compared with other Asian countries, however, Indonesia’s manufacturing PMI in June was the lowest, suggesting economic recovery in the country is relatively slower than in its neighbors.

The government has officially stopped bundling in the preemployment card’s training program. Preemployment Card Program Management president director Denni Puspa Purbasari already signed a circular that announced a stop to the bundling practice on June 30. The new rule will be effective starting July 1. The decision was taken after the program’s management team held an evaluation meeting.

Trade Ministry secretary general Suhanto, who also serves as acting domestic trade director general, has said recent increases in broiler chicken and egg prices at the consumer level were driven by rising farm gate prices. According to Trade Ministry data, the broiler price for consumers has increased by 3.1 percent month-to-month (mtm) and the egg price by 6.8 percent mtm. Meanwhile, farm gate prices for broilers and eggs have increased by 10.8 percent mtm and 13.5 percent mtm, respectively. “The Trade Ministry is maintaining coordination with the Agriculture Ministry and communication with poultry farmers to monitor changes in supply and prices at the farm gate. Based on our current observation, we predict that broiler and egg prices will return to normal in the next two weeks,” Suhanto said.

The government aims to have 10 million micro, small and medium enterprises (MSMEs) go digital by the end of the year to help them ease the financial burden of the COVID-19 pandemic, a high-ranking official has said. Cooperatives and Small and Medium Enterprises Minister Teten Masduki said that currently only 8 million MSMEs had an online selling platform, either through e-commerce or social media. This figure represents around 13 percent of all MSMEs in the country.

Teten said that MSMEs also needed to integrate their businesses with digital payment solutions because consumers were switching to cashless payments due to fears of contracting the coronavirus disease. Bank Indonesia assistant director Ronggo Gundala Yudha said 3.7 million merchants in Indonesia used the Quick Response Indonesia Standard (QRIS) code, 2.5 million of whom were small and medium enterprises, while 600,000 were micro merchants.