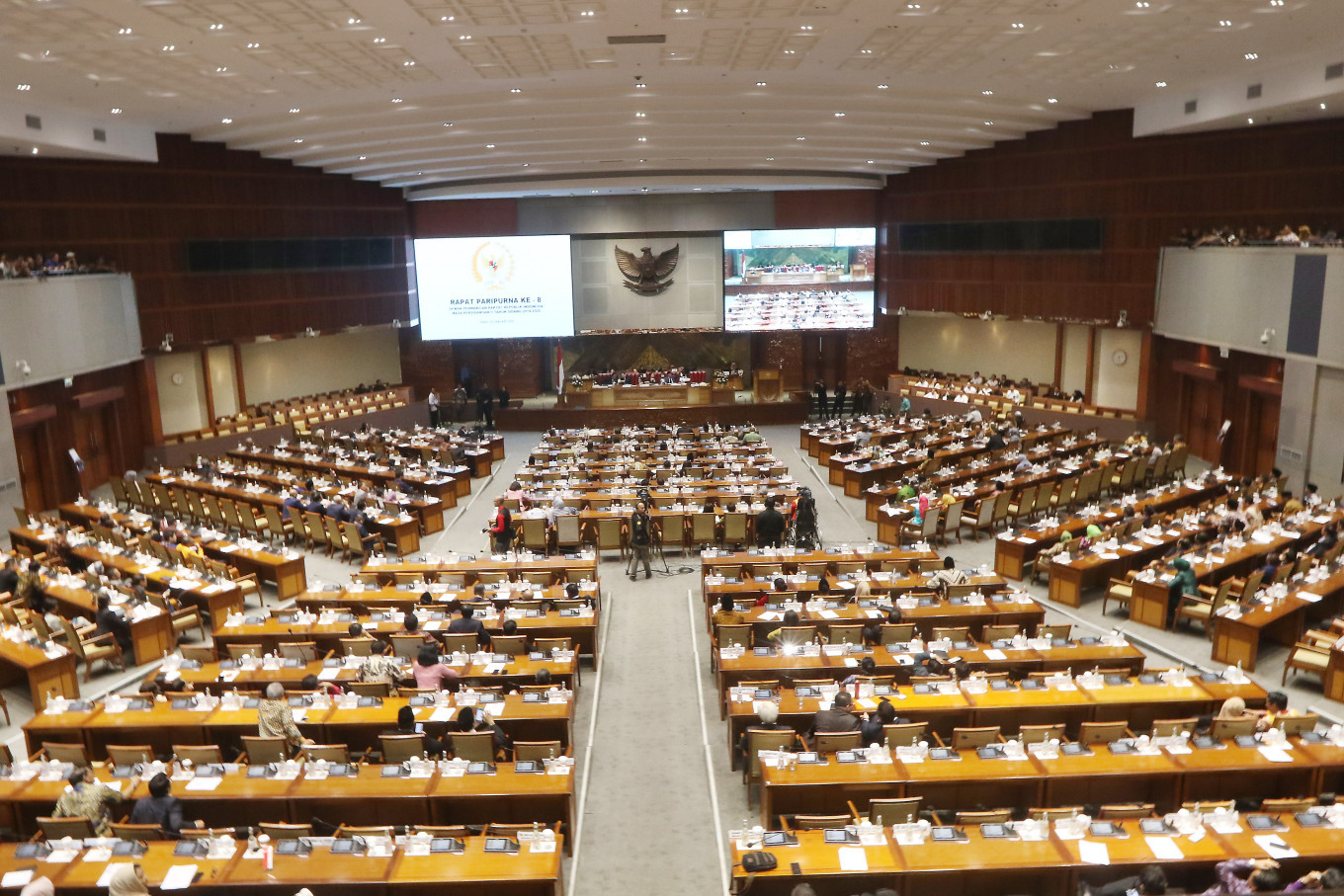 Members of the Indonesian House of Representatives (DPR) attend a plenary session in Senayan, Central Jakarta, on Feb. 22. (JP/Dhoni Setiawan)

Govt aims for Indonesia to be COVID-19-free by GPDRR meeting in 2022
Kompas (https://tinyurl.com/y3omud57)

National COVID-19 task force chief Doni Monardo said the government had targeted Indonesia to be free of COVID-19 by the Global Platform for Disaster Risk Reduction (GPDRR) meeting, to be held from May 23 to 28, 2022 in Bali.

“As previously mentioned, vaccines are expected to be available by 2022 so everything can run safely,” Doni said following a virtual meeting with President Joko “Jokowi” Widodo on Thursday.

Doni explained that once Indonesia was freed of the pandemic, the GPDRR meeting could be attended by up to 9,000 participants consisting of high-ranking officials, nongovernmental organizations, academics, the private sector and the media from 193 countries.

Thus, the GPDRR meeting is expected to help revive Indonesia’s economy and tourism, which has considerably slumped amid the pandemic.

The National Disaster Mitigation Agency (BNPB) said that an emergency budget of Rp 1.3 trillion had been allocated to handling potential impacts caused by the La Niña weather phenomenon. BNPB chief secretary Harmensyah assured that the emergency budget for COVID-19 handling did not reduce the allocated amount for handling natural disasters.

Harmensyah elaborated that Rp 232 billion of the budget had been allocated to handling floods and landslides, Rp 70 billion to earthquakes and tsunamis, Rp 968 billion to forest and land fires, Rp 19.5 billion to volcanic eruptions, Rp 5.2 billion to drought and Rp 30 billion to other disasters.

Previously, the Indonesian Forum for the Environment (Walhi) said that central and regional governments must be ready to coordinate and anticipate potential disasters arising from extreme weather conditions.

Confederation of Indonesian Trade Unions (KSPI) chairman Said Iqbal said he would continue to protest against the job creation omnibus law, claiming that opposition to the law would only grow in the future.

Said explained that his party planned to submit a judicial review of the law to the Constitutional Court (MK), then request a legislative review at the House of Representatives as well as an executive review by the government.

In addition, the KSPI will raise awareness about their campaign against the jobs law, including by explaining the content of the law and their reasons for their rejection, especially by laborers.

Said further said he would not be involved in discussions concerning the derivative regulations of the jobs law to maintain his opposing stance.

Moreover, Said that not all workers’ demands were accommodated in the law, despite having submitted a counter-draft. “It is not true what the House said about 80 percent of labor proposals having been incorporated into the job creation law,” he said.

Indonesia managed to record a US$2.44 billion trade surplus in September, Statistics Indonesia (BPS) announced. The figure is slightly higher than the trade surplus in the previous month of $2.35 billion. BPS chairman Suhariyanto said exports in September were down by 0.51 percent year-on-year (yoy) but increased by 6.97 percent month-to-month (mtm) to $14.01 billion. Meanwhile, imports shrank by 18.88 percent yoy but went up by 7.71 percent mtm to $11.57 billion.

Foreign Minister Retno Marsudi is concerned about the British government’s plan to conduct due diligence on imported agricultural products from Indonesia, which include palm oil, coffee and timber and wood products. Retno said the policy could hinder bilateral trade between the two countries, as the policy may serve as a non-tariff trade barrier. Retno urged the British government to start conducting talks with the Indonesian government on a mutual recognition policy. On the same occasion, Retno also welcomed British investors’ interest in renewable energy investment such as United Kingdom-based renewable energy companies Aggreko on solar photovoltaics and Orbital Marine Power on tidal turbines.

The Central Kalimantan provincial administration cut the number of mining permits from 1,007 permits in 2016 to 305 permits in August 2020. Within this time period, the number of coal mining permits was down from 618 to 226 permits. Central Kalimantan Energy and Mineral Resources Agency head Ermal Subhan claimed that cutting down the permits had increased the province’s locally generated income (PAD) by 460 percent to Rp 1.7 billion (US$115,060). Meanwhile, the collection of non-tax revenue (PNBP) from mineral and coal mining increased by Rp 531 billion to Rp 8.2 trillion.