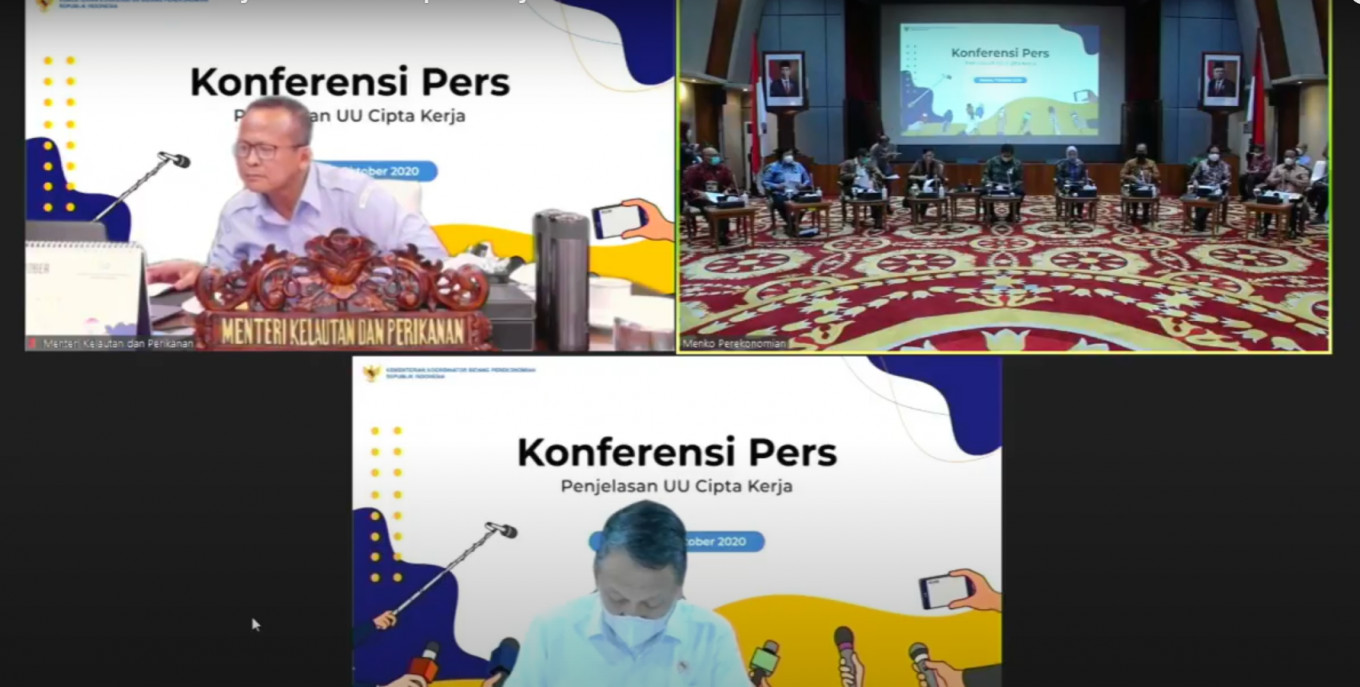 Eleven ministers in President Joko “Jokowi” Widodo’s administration convened on Wednesday, lining up to defend the controversial Job Creation Law in a joint press briefing broadcast live from the Office of the Coordinating Economic Minister’s conference room, despite public unease about the newly passed law.

Ministers representing various portfolios, from finance to labor, and small businesses and the environment joined the briefing, each of them speaking from behind their masks as concern rose among the public about the implications of the law, passed on Monday by the House of Representatives. The omnibus law, which revises more than 79 laws and eliminates thousands of earlier provisions, is aimed at boosting investment and creating jobs in Southeast Asia’s largest economy.

“We believe it’s important to provide the right information so as to avoid misinformation,” said Coordinating Economic Minister Airlangga Hartato, who had been in charge of the bill’s deliberation. “The Job Creation Law aims at simplifying, synchronizing and cutting regulations from a hyper-regulatory environment that can impede job creation.”

President Joko “Jokowi” Widodo has given the Health Ministry authority in the implementation of COVID-19 vaccination as well as determining the purchase price for the vaccine, as stipulated in Presidential Decree (Perpres) No. 99/2020 concerning the procurement and implementation of vaccinations in handling the COVID-19 pandemic.

The Perpres was signed by the President on Oct. 5 and announced the following day.

In the Perpres, determining the type and quantity of COVID-19 vaccines to procure will be done by the Health Ministry, taking into account suggestions from the COVID-19 handling and national economic recovery committee.

“Vaccine procurement and implementation in this Perpres will be applicable in 2020, 2021 and 2022,” the Perpres states.

A number of mass organizations observing the regional elections have claimed that candidate pairs are not yet ready to hold online campaigns. This is largely due to candidates’ inability to reach voters through social media and the fact that there are many loopholes in the regulations that allow candidates to hold conventional campaigns.

People’s Voter Education Network (JPPR) national coordinator Alwan Ola Riantobi said  several candidate pairs had been unable to adapt to technological developments amid the COVID-19 outbreak. “It is not surprising that only few candidates have switched to online campaigns,” Alwan said on Wednesday.

The Elections Supervisory Agency (Bawaslu) previously reported that 43 percent of regional head candidates were still actively conducting face-to-face campaign events. These findings were obtained after the agency recorded 858 campaign activities across the 270 regions holding the elections.

Furthermore, Alwan criticized political party elites for allowing their candidates to continue holding conventional campaigns. He has urged election organizers and the government to issue a warning that would hinder the public from voting for candidates that had violated health protocols.

“[Their insistence on holding face-to-face campaigns] proves that candidates have no commitment to protect the people,” Alwan said.

The COVID-19 handling task force has reminded all regional administrations to anticipate the emergence of new COVID-19 clusters due to natural disasters. As Indonesia transitions into the rainy season, extreme torrential rains often bring about floods.

“The climate has no significant effect on the development of the coronavirus in Indonesia. However, we must be careful of floods. It is when people are evacuating because of floods, that clusters could form in shelter,” said COVID-19 handling task force expert Dewi Nur Aisyah on Wednesday.

Dewi added that local administrations should anticipate these scenarios by preparing flood shelters that adhere to health protocols.

“To break the chain of transmission, everyone must continue to wear masks, wash their hands and maintain their distance,” she said.

Health Minister Terawan Agus Putranto, a radiologist who heads the Indonesian Radiology Specialists Association (PDSRI), has come under fire yet again after issuing a regulation that many doctors say prioritizes radiologists and could have negative impacts on prompt treatment of patients.

Primary service providers who offer mobile or dental X-ray services and ultrasonography (USG) but do not yet have any radiologists must employ either general practitioners or other specialists with radiology-related skills as proven by certificates from the Radiology Collegium, a radiology specialization education board. They must also be supervised by radiologists.

In the letter, doctors said Terawan had “prioritized fellow radiologists in medical services that make use of radiology instruments [...] when other doctors have met the standards for competency and qualifications both in terms of knowledge [and] skills” in line with the 2004 Law on medical practices and with Indonesian Medical Council (KKI) regulations.

The doctors said they were worried most about how the regulation would disrupt healthcare services, as a deficit of radiologists was to be expected, even with the regulation giving a two-year grace period for healthcare facilities to adjust.

The government has cancelled its plan to issue an omnibus bill on taxation. Some of the revisions planned for the taxation omnibus bill have been incorporated in the recently passed Job Creation Law and Law No. 2/2020 on COVID-19 pandemic response.

Some main points on taxation in the Job Creation Law include abolishing income tax for dividends, relaxing administrative sanctions and emphasizing that the Haj Fund Management Agency (BPKH) is not subject to income tax.

Despite that, Pelita Harapan University (UPH) tax observer Ronny Boko argued that to boost investment, the Job Creation Law's taxation rule can still be made more attractive. Lowering the corporate income tax to 17 percent as Singapore has done, for instance, could help to support businesses.

Changes in the wage system, as mandated in the recently passed Job Creation Law, are expected to be implemented by Nov. 1. The Manpower Ministry will make the necessary adjustment without a transition period.

According to Manpower Minister Ida Fauziah, the calculation formula in the earlier Manpower Law is no longer relevant as the economy has contracted since the pandemic.

Businesses also said the Job Creation Law was the middle way for laborers, employers and the labor force. They believe that abolishing the sectoral minimum wage and regional minimum wage will not affect household income and purchasing power.

Despite that, the workers argue that the new wage scheme could lower their income and induce conflicts. Jakarta currently has the highest provincial minimum wage at Rp 4.26 million while Central Java has the lowest at Rp 1.74 million.

As a response to the newly passed Job Creation Law, at least 153 companies intend to immediately open businesses in Indonesia. The law has been welcomed positively by businesses, micro, small, and medium enterprises (MSME), cooperation, as well as local and foreign corporates, while some labor unions still reject the law.

Coordinating Economic Minister Airlangga Hartanto explained that the Job Creation Law aimed to “simplify, synchronize, and cut regulatory obesity that has slow down investment, and therefore it shall create more employment.”

Airlangga also noted that the Job Creation Law did not delete the minimum wage regulation, and the workers still get the severance pay from the employers with additional benefits from the unemployment insurance scheme (JKP) which includes upskilling opportunities.

Airlangga also asserted that the employers should provide workers with the rights to take paid leave, resting time, praying time, pregnant leave, and menstrual leave as regulated by Employment Law No.13/2003.

BPUI spokesman I Gede Suhendra said that in addition of taking over policies from Asuransi Jiwasraya, IFG Life would sell its own life insurance as well as health insurance products.

Jiwasraya president director Hexana Tri Sasongko said that Jiwasraya management had talked to many of its policy holders and the majority of them agreed that their policies would be taken over by IFG Life. Jiwasraya has 2.63 million policy holders.

Asuransi Jiwasraya had defaulted Rp 12 trillion in policy payment because of corruptions and mismanagement. Jiwasraya’s equity has gone negative to minus Rp 37.4 trillion.

State-owned airport operator Angkasa Pura (AP) I announced on Monday that 26 foreign and local companies had passed the prequalification stage as they seek to join the overhaul and operation of Lombok International Airport.

The selected company would devise and implement the airport’s design, build, finance, operate and transfer (DBFOT) process with a 30-year concession period. The project’s value is estimated at Rp 10.3 trillion (nearly US$700 million) and will adopt a usage fee scheme to return the investment.

“We highly appreciate the enthusiasm of all 26 strategic partner candidates, who are among the world’s best airport operators and Indonesia’s best infrastructure companies. All of them have a commitment to work together to develop Lombok International Airport,” AP I president director Faik Fahmi said in a statement on Monday.