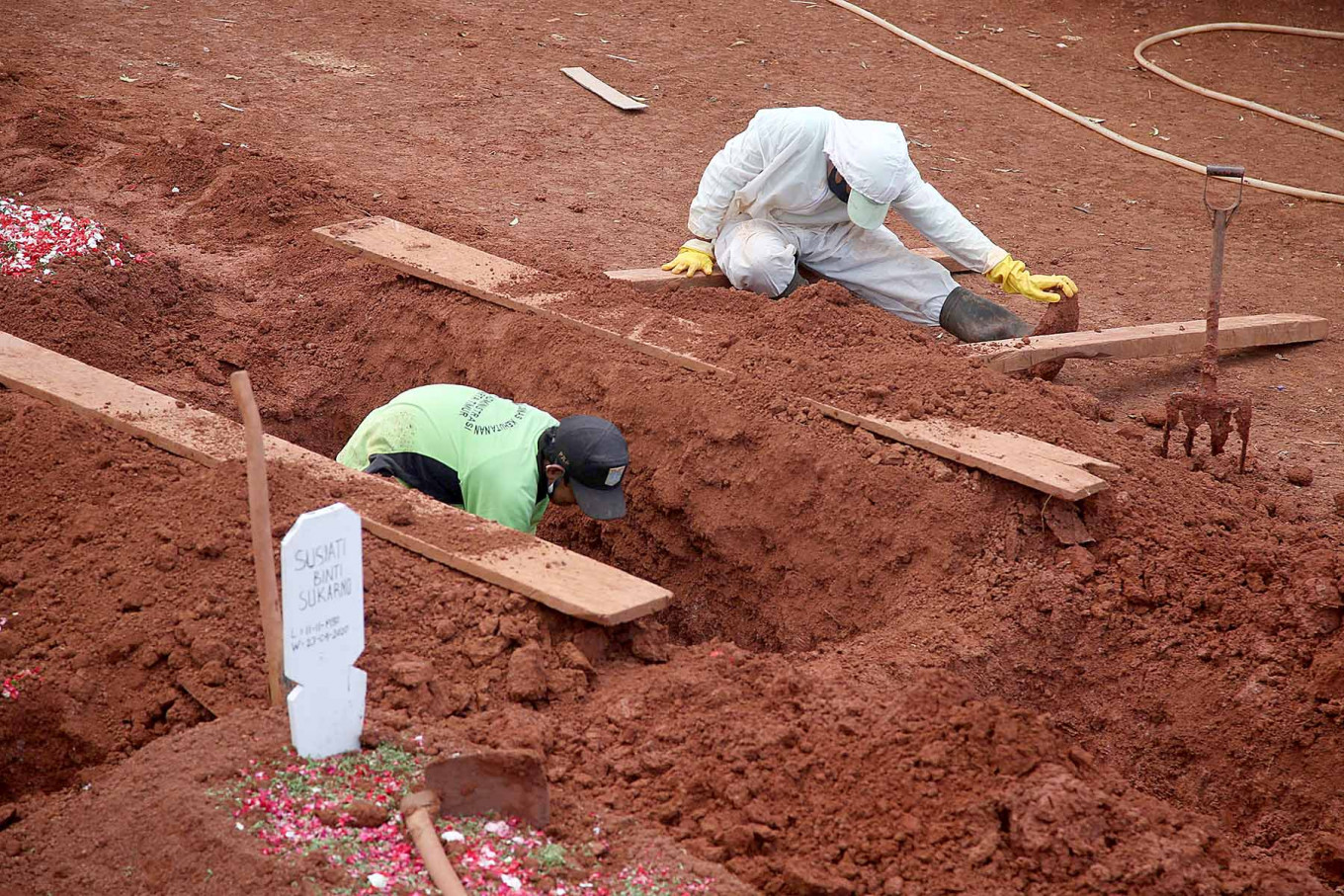 Daily grind: One man digs a grave at the COVID-19 burial ground at Pondok Ranggon public cemetery in East Jakarta, on Monday, while another worker wearing personal protective gear helps him. The latter was originally tasked with carrying the bodies of COVID-19 victims, but he was needed to help the gravediggers, who have been under pressure due to the large number of burials. (JP/P.J. Leo)

According to epidemiologists, asymptomatic COVID-19 cases are considered the most dangerous group because despite showing no symptoms and looking outwardly healthy, these individuals are carrying the virus and may infect others.

“On average, the figure of asymptomatic cases stands at 45 percent and this is what we have to tackle,” said Fify in a virtual discussion on Tuesday.

The proportion of asymptomatic cases across the country is also reported to take up the majority of COVID-19 cases. Nationally, COVID-19 handling task force head Doni Monardo said that about 80 percent of Indonesia’s COVID-19 cases are reported to show no symptoms.

The government, thus, has been urged to seriously handle asymptomatic COVID-19 patients. Despite the fact that asymptomatic patients are more likely to recover, they risk infecting others that may have comorbidities.

At least 5 million workers have planned a national strike as the House of Representatives and the government concluded the deliberation of the labor issues in the omnibus bill on job creation on Sunday, abandoning an earlier plan to drop the articles.

The strike is planned to take place from Oct. 6 to 8, when the House is expected to hold plenary sessions to pass the bill into law.

The deliberation on the cluster containing revisions to the 2003 Labor Law has been the most difficult part in passing the bill since it has been marred by protests from labor unions. There had been plans to leave the cluster out of the bill deliberation process due to the strong resistance from the unions.

During a session held from Friday to Sunday, lawmakers and the government agreed upon at least nine points of the revisions.

Among the points that have been agreed is abolishing the sectoral minimum wage system (UMSK) by only recognizing the provincial minimum wage (UMP) and regency or municipality minimum wages (UMK), the formulas for which are based on economic growth and the inflation rate.

Health protocol violators amid campaigns must be sanctioned
Kompas, headline

Amid the regional head elections campaign period, set to run from Sept. 26 to Dec. 5, a number of health protocol violations have been reported, although they are relatively few. However, there still seems to be a lack of cooperation between agencies in dealing with health protocol violators, especially in determining who will impose the sanctions.

Because the elections are being held during the pandemic, there are tendencies for law enforcement to be less firm in imposing sanctions for health protocol violators. Shifts between responsibility and authority between agencies may thus result in a lack of a deterrent effect on offenders and can threaten public safety. Moreover, the apparent leniency towards offenders might only strengthen public apathy and have a negative impact on the quality of the elections.

Based on their data, the first two days of the campaign period already found a number of health protocol violations. The violations, among others, were related to face-to-face meetings with participants of more than 50 people, not wearing masks and not maintaining distance.

Corruption Eradication Commission (KPK) prevention deputy Pahala Nainggolan said that the antigraft body had recently finished a draft for a Commission Regulation on the organization and its work procedures. “The commission’s regulation is currently being discussed by the Law and Human Rights Ministry,” Pahala said on Tuesday.

Pahala said that the commission regulation would reduce the KPK’s internal duties as a consequence of last year’s revision of the KPK Law, which included the antigraft body in the executive power clump.

Apart from a reduction in duties, the KPK’s organizational structure will also see changes. In accordance to the draft Commission Regulation, the KPK will have an inspectorate general, an education and community participation deputy as well as a regional coordinating, monitoring and supervision deputy.

Activists and public health experts have criticized the government for failing to balance between optimistic and cautionary messages in disseminating COVID-19 information, which they say could undermine public health measures to tackle the pandemic.

Anita Wahid, a member of the committee for the Indonesian Antislander Society (Mafindo), said she had noticed recently that the government had a tendency to convey an optimistic tone in its public communications, but without including a message calling for vigilance to prevent transmission.

Anita said she was concerned that, if this was to continue, the public would be split between those who complied with health protocols and those who underestimated the threat of the disease, further dividing society.

President Joko “Jokowi” Widodo said on Saturday that Indonesia’s case number was still lower than those of India and the United States but he failed to mention that the scale of testing in the country lagged behind the two others.

The government and the House of Representatives have agreed to the 2021 state budget amounting to Rp 2.75 quadrillion (US$ 184.86 billion) to boost economic growth to 5 percent. Of the total budget, the government targets revenues to reach Rp 1.74 quadrillion, with Rp 1 quadrillion in fiscal deficit, or 5.7 percent of the gross domestic product (GDP).

Finance Minister Sri Mulyani explained that the 5 percent year-on-year economic growth target for next year is in line with the path of the national economic recovery. Other macroeconomic targets set in the 2021 budget include 3 percent inflation, rupiah exchange rate of Rp 14,600 per US dollar, 7.29 percent interest rate for 10-year government bonds, and US$45 per barrel crude oil price.

The government expects tax revenue in 2021 to reach Rp 1.44 quadrillion, or about 8.18 percent tax ratio of the total GDP. The tax revenue would mainly come from income tax, value added tax (VAT), land and building tax, and excise tax. To finance the deficit, the government will issue government bonds totalling Rp 1.18 quadrillion.

The Washington, DC-based development bank now projects Indonesia’s economy to contract by 1.6 percent this year under the baseline scenario; in June it had projected zero growth. However, the economy may contract even by 2 percent if the country fails to control the pandemic, according to the World Bank’s East Asia and Pacific Economic Update published on Tuesday.

“It is in countries like Indonesia and the Philippines that recovery will be much slower, because they have not succeeded in controlling the disease,” World Bank East Asia Pacific chief economist Aaditya Mattoo said during a virtual press briefing on Tuesday. “It may be well into next year that Indonesia will come back to pre-pandemic levels of economic output, and it may take them even longer.”

The lender expects Indonesia’s economy to rebound next year by 3 percent to 4.4 percent. The government has also revised down its economic projection for this year to a deeper contraction of between 0.6 percent and 1.7 percent, as pandemic fear and uncertainty have taken toll on consumer spending and business investment.

This would mark Indonesia’s first economic contraction since the 1998 Asia financial crisis, when the country’s economy shrank 13.13 percent year-on-year (yoy).

When deliberating the job creation omnibus bill, the House of Representatives and the government agreed that the provision for severance pay for laid-off employees would remain the same as those governed by the 2003 Labor Law, that is 32 times of employees’ salary at the maximum.

Supratman Andi Agtas, chairman of the House’s working committee on the job creation bill, said the government’s burden sharing for the severance pay would be paid through a social security scheme.

Labor unions opposing the job creation omnibus bill, such as the Indonesian Worker Union Confederation (KSPI), however, question the ability of the government to share the severance pay burden, considering the big budget deficit the government has to shoulder now.

The KSPI’s chairman said the job creation bill, if passed, would only create a more liberal and flexible job market, and would penalize workers more.

Foreign investors booked a Rp 341.93 billion net sell across all markets yesterday, leading to a total of Rp 14.76 trillion (US$1.01 billion) foreign net sell in September alone. Following Japan and China, Indonesia is currently in third place for countries with the highest outflow of foreign funds in Asia. Meanwhile, in the bond market, the foreign net sell reached US$218.2 million for the beginning of September to Sept. 25.

RHB Sekuritas Indonesia analyst Michael Setjoadi said foreign investors were concerned about the sharp rise in COVID-19 cases and their potential to slow down economic recovery. Compared to the Philippines, which faced a 16.5 percent contraction in the second quarter due to lockdowns, Indonesia only faced a 5.32 percent contraction. However, the pandemic in Indonesia has also continued to spiral out of control, leading foreign investors to be skeptical about the prospect of economic recovery.

Besides, the planned amendment of the 2009 Bank Indonesia law has also made investors worried about the prospect of the central bank’s independence being undermined.

Foreign sell-off will affect the exchange rate of the rupiah, which has been hovering around Rp 14,900 per US dollar. The depreciation of the rupiah could put even more pressure on the stock market, especially as the job creation omnibus law does not seem to be attracting enough foreign investors.

China’s speedy industrial recovery has become a double-edged sword for Indonesia’s trading sector. On one hand, it opens up the opportunity for Indonesia to maximize the export of several top commodities. On the other hand, it creates the risk of rising imports as the Chinese government continues to target potential export markets, including Indonesia.

According to the Indonesia Anti-Dumping Committee (KADI), China will use this momentum by providing subsidies to its industries. Chinese exporters are also likely to intensify shipping their products. Consequently, 70 percent of the commodities in Indonesia are dumping products from China.

Indications that China is dumping its products to Indonesia has been visible since earlier this year. Domestic players hope that the government will take protective measures to mitigate the inflow of Chinese products.