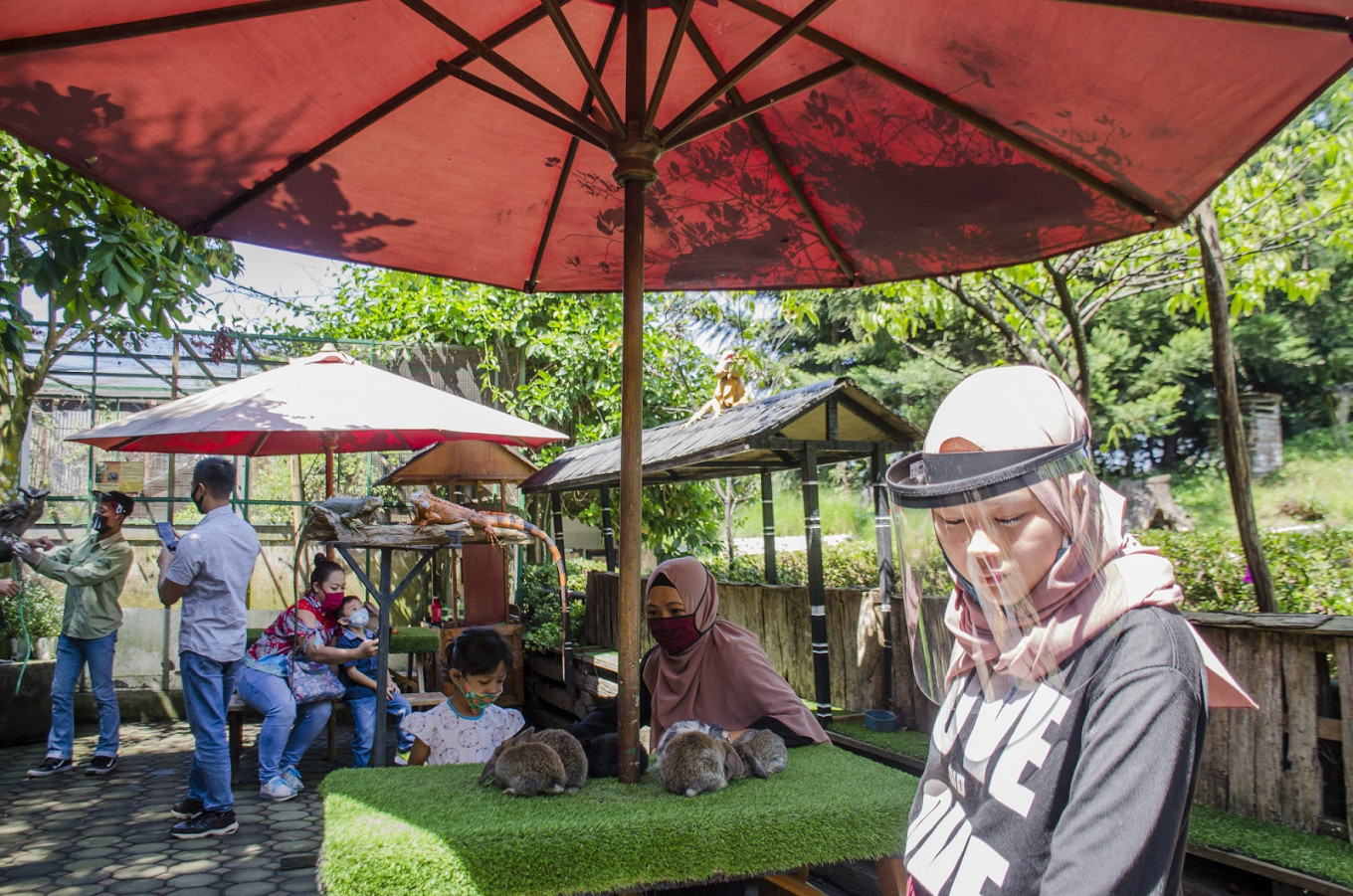 Tourist industry experts have lauded the government’s decision to issue health protocols for public places such as hotels and restaurants, saying the measures will provide customers peace of mind as tourist destinations start to reopen.

In general, such establishments are obliged to provide hand sanitizer in public spaces, clean these areas with disinfectant at least three times a day and maintain proper ventilation by prioritizing fresh air circulation or periodically replacing air conditioner filters.

Temperature checks and the use of face masks are also mandatory for both employees and guests, according to the decree. People without masks are barred from entering public facilities and spaces.

The 50 percent cap on venue capacity that has been widely used by businesses is not included in the decree, which instead has a 1-meter social distancing rule.

The decree also provides specific regulations for certain businesses, such as mandatory room disinfection prior to guest check-in and the provision of hand sanitizer in each room for hotels.

President Joko “Jokowi” Widodo has reassured that every policy issued by the government in response to the COVID-19 pandemic, including the “new normal” policy, had always been backed by scientific data presented by the national COVID-19 task force’s expert team.

“Every policy we issue is always based on scientific data. We always seek advice from experts,” President Jokowi said at the State Palace on Wednesday. According to him, based on the data provided, the government has formulated policies and measures based on regions’ readiness in embracing the new normal.

National COVID-19 task force expert team head Wiku Adisasmito said the government had implemented the new normal policy based on zoning maps and after considering infrastructure capacity, health facilities’ capacities and the availability of medical devices. “All the conditions have been deemed conducive to implement the new normal,” Wiku explained.

According to Wiku, the COVID-19 zoning map from May 31 to June 21 showed that the number of low-risk and unaffected areas had increased from 44 percent to 58.3 percent. “Nearly 60 percent of the areas are [considered] “green zones”. Therefore, several sectors deemed safe have been allowed to reopen,” he said.

Likewise, the services and number of hospitals, Wiku said, had increased significantly within the past three months, from only 250 hospitals being ready to treat COVID-19 patients at the beginning to the current 1,687 hospitals. Of this number, 800 have been named national and provincial referral hospitals.

To date, no decision has been made to postpone the 2024 simultaneous regional elections (Pilkada) to 2027. The issue has not yet been discussed by the government or the House of Representatives.

“[Postponing the 2024 Pilkada] was not included in the 2020 Perppu [regulation in lieu of law]. This discussion will be included in other matters concerning the presidential elections,” explained Home Minister Tito Karnavian on Wednesday.

According to Tito, the House and the government are still focusing on discussing the implementation of the 2020 Pilkada, which is regulated by Perppu No. 2/2020 concerning the postponement of the elections.

The House of Representatives has made a promise to stop the discussion of the Pancasila ideology guidelines (HIP) bill. The promise was made after three House deputy speakers met with representatives of the National Anticommunist Alliance, who protested outside the House complex in rejection of the HIP bill on Wednesday.

The three House deputy speakers, namely Aziz Syamsuddin, Sufmi Dasco Ahmad and Rachmat Gobel met with representatives of the protestors. After holding closed-door discussions, the House has decided to stop the deliberation of the HIP bill through a specified mechanism.

“We will be committed to stopping this [HIP bill discussion] with the right mechanism detailed in the law,” Aziz said on Wednesday. He said the controversial articles concerning the bill will be kept as records for the House, before reiterating “God willing, the bill’s discussion will be stopped.”

According to Aziz, the HIP bill is at the government and that the House is awaiting an official letter from the government. It is this letter that will be later discussed at the House. “We will then take the letter to a plenary meeting in a commitment to stop the deliberation of the HIP bill,” Aziz said.

The revised Corruption Eradication Commission (KPK) Law No. 19/2019 has been deemed legally flawed and considered invalid if passed in a non-quorum plenary meeting.

“The revised KPK Law was a result of a joint agreement between the House of Representatives and the President. However, according to the petitioner’s record, the ratification of the House and the President’s approval did not meet the quorum because at least 50 percent plus one House member was not present [when the agreement was reached]. Not only is the revision legally flawed but it is also invalid. Therefore, it does not have binding legal force,” explained former supreme court chief Bagir Manan, who had become an expert in the formal and material test session of the KPK Law at the Constitutional Court building on Wednesday.

According to Bagir, a good law should not only be comprehensive in substance but must also be ratified through the appropriate procedures. The amendment to the KPK Law, at the time it was being ratified, faced much rejection from the public. Many academics and civil society member also questioned the process of drafting the law. However, the House and the government were not responsive to the protests.

“The revision of the KPK Law was carried out within 12 days. It was such a brief discussion and there was no transparency or democratic legitimacy in the passing of that law,” Bagir said.

The government has placed Rp 30 trillion (US$2 billion) in state-owned Bank Mandiri, Bank BNI, Bank BRI and Bank BTN with subsidized interest rates and assigned them to distribute loans to the real sector in order to boost loan demand.

Based on Finance Ministerial Regulation No. 70/2020, the government instructed the state banks to pay 80 percent of Bank Indonesia's reference rate, which currently stands at 4.25 percent.

Finance Minister Sri Mulyani Indrawati said the low interest rate could motivate partner banks to improve the real sector by lending to businesses with a lower interest rate. She added that the program, which would prioritize small and medium enterprises (SMEs) would be evaluated every three months. And if it is deemed successful, the government will add more funds, she said.

The Financial Services Authority (OJK) is tasked to provide a list of 60 million micro, small and medium enterprises (MSME) that will receive subsidized loans from the government’s national economic recovery program (PEN).

OJK deputy commissioner for public relations Anto Prabowo said the OJK would use data from its credit information service system (SLIK) to select MSMEs eligible for the subsidized loans. The data would be synchronized with the Finance Ministry’s program credit program information system (SIKP).

The government has allocated Rp 35.28 trillion (US$2.48 billion) to MSMEs in its national economic recovery (PEN) program. The subsidized loans will be channeled through commercial banks and other financial institutions.

The nation’s high unemployment rate is expected to worsen and continue into next year as the country braces for further economic consequences of the COVID-19 crisis, senior government officials said on Monday.

Some 5.5 million people may lose their jobs this year, pushing the unemployment rate to between 8.1 and 9.2 percent, up from 5.28 percent last year, according to National Development Planning Minister Suharso Monoarfa.

As a result, up to 12.7 million people are expected to be unemployed by next year, up from 7.05 million people in 2019. The government’s baseline scenario for next year predicts that the unemployment rate will be between 7.7 and 9.1 percent.

“If the [economic] condition persists throughout the year, we are worried that unemployment will reach 10.7 million to 12.7 million in 2021," Suharso said during a parliamentary hearing on Monday.

As of May 27, more than 1.79 million people have lost their jobs after nonessential businesses temporarily shut down to comply with government restrictions, according to data from the Manpower Ministry.

“We are hoping that jobs will return to near prepandemic levels,” Suharso said.

Communications and Information Minister Jhonny Plate said the government was speeding up an amendment to the information and electronic transactions law to attract investments in data centers, as global tech giants such as Google, Amazon and Microsoft have set their sights on Indonesia.

Google has invested in data centers in Indonesia to offer better cloud services. Google Indonesia country director Megawati Khie said Google would follow all the rules the country had established in order to expand its cloud business across the country.

Amazon, meanwhile, said that its web services, including cloud services, would be available in Indonesia soon.

The Covid-19 pandemic has adversely affected all businesses, including technology companies. Most recently, homegrown decacorn Gojek confirmed its plan to lay off 430 employees, which is equivalent to 9 percent of the company’s total workforce, due to the pandemic.

Gojek co-CEO Andre Soelistyo explained that the 430 laid-off employees were working for GoLife, whose services GoMassage and GoClean had slumped during the pandemic. Before Gojek’s announcement, Grab and Bukalapak axed employees, namely 360 employees or 5 percent of the workforce for the former, and 100 employees or 4 percent for the latter.

Mandiri Capital Indonesia CEO Eddi Danusaputro said mass lay-offs were unavoidable for technology companies, because they needed to cut costs during the pandemic. "Start-ups need to conserve cash, as fundraising will be difficult. Not only start-ups; big companies face the same problem," said Eddi.