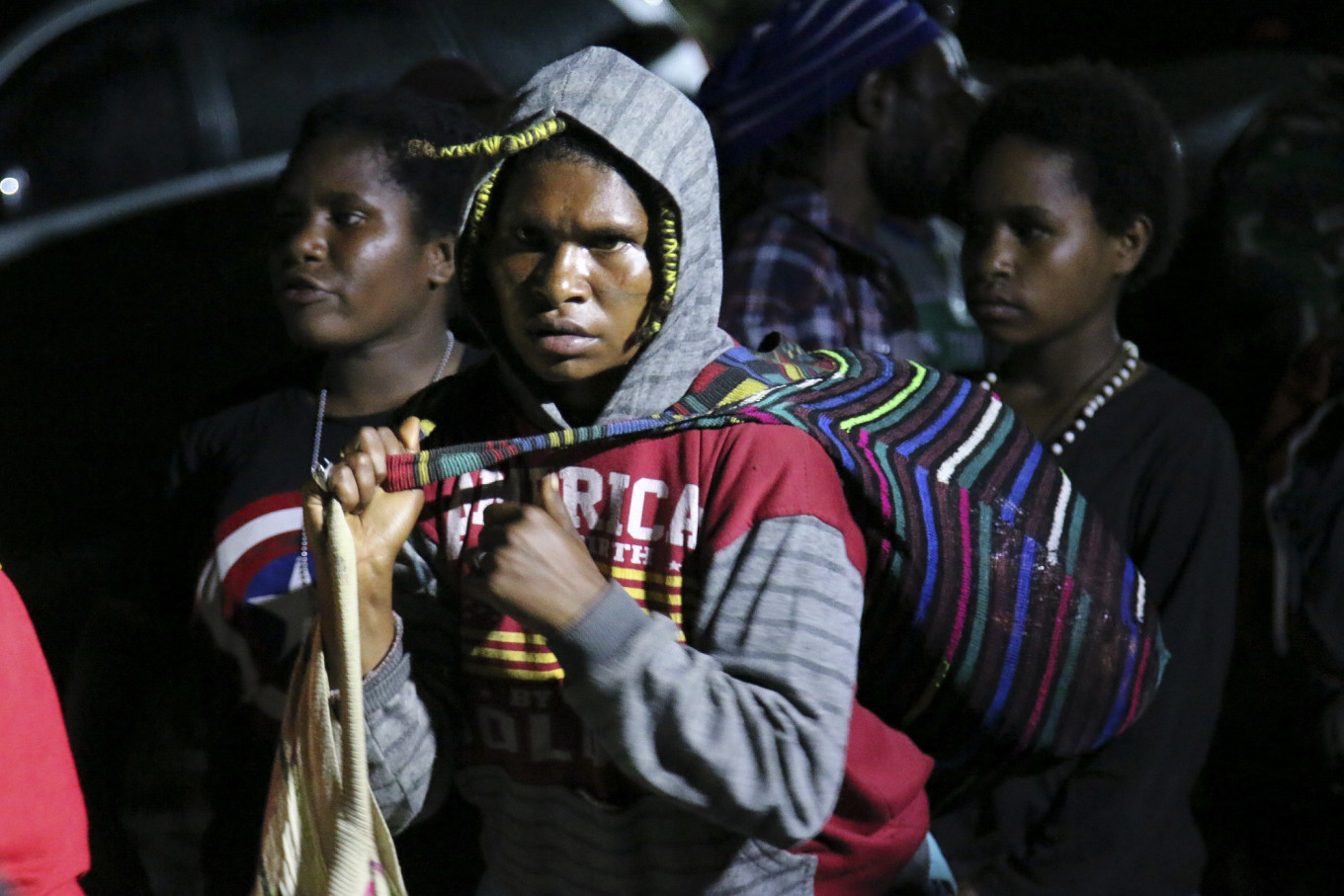 Residents of Tembagapura district in Mimika regency, Papua waits to be evacuated by the Indonesian Military (TNI) and National Police personnel on March 8. Thousands of residents in the area have been displaced from their homes due to armed conflict between security forces and armed criminal groups. (Antara/Sevianto Pakiding)

Home Minister Tito Karnavian has said that the government will continue to grant special autonomy for Papua and West Papua. The special autonomy status of the easternmost provinces will end in 2021.

“One of our aspirations is to maintain the special autonomy status for 20 years, as it is still very much needed to accelerate development in Papua,” Tito said during a visit to Timika, Papua, on Thursday.

Tito claimed that the government had been paying close attention to the development of Bumi Cendrawasih. Moreover, he gave assurances that all ministries and institutions at the central government level had prepared special schemes to advance Papua and West Papua’s development.

According to Foreign Minister Retno LP Marsudi, the Indonesian Embassy and the Indonesian ambassador in Seoul have been facilitating discussions of cooperation between the two companies since June.

Genexine will conduct Phase I clinical trials of the vaccine in South Korea until August. “Meanwhile, Phase II clinical trials are planned to be done in Indonesia in either September or October,” Retno said.

Former General Elections Commission (KPU) commissioner and graft suspect Wahyu Setiawan has offered himself up as a justice collaborator for the case that implicated him as well as other alleged election violators.

Saiful Anam, Wahyu's lawyer, told reporters that the former official had filed the request during a hearing with the Jakarta Corruption Court on July 9.

Wahyu is currently standing trial for allegedly accepting a bribe from Harun Masiku and Saeful Bahri, politicians of the ruling Indonesian Democratic Party of Struggle (PDI-P).

Should the request be granted, Saiful said Wahyu would assist the investigation by providing information on other parties who were suspected of being involved in the bribery case, such as PDI-P secretary-general Hasto Kristiyanto and PDI-P chairwoman Megawati Soekarnoputri.

City-owned transportation company PT MRT Jakarta is planning a traffic reengineering scheme from the Hotel Indonesia traffic circle (Bundaran HI) to West Ancol for the MRT phase 2 construction project. MRT Jakarta president director William Sabandar said the first phase of traffic reengineering would take place from the end of July 2020 until March 2023 at the center of the road. The second phase would occur between April and December 2023 on the left side of the road. The last phase would be carried out from January 2024 to March 2025 on the right side of the road.

State-owned oil and gas holding company PT Pertamina will start a pilot project for palm-oil-based jet fuel, dubbed green avtur, at the Cilacap refinery, Central Java, by the end of the year. Pertamina president director Nicke Widyawati said the pilot project would be done using a coprocessing injection method with a 3 percent crude palm oil mix. She also said the company would build two new biorefinery processing plants at Cilacap and Plaju. The biorefinery in Cilacap will have the capacity to produce 6,000 barrels per day (bpd), while Plaju’s biorefinery can produce up to 20,000 bpd.

Indonesia’s exports of horticultural products such as fruits, vegetables and spices to Japan remain uncompetitive because of high prices, officials have said. Japanese food product importer Nanyang Trading Co president Katsunari Kasugai said Indonesian frozen horticultural product prices were 40 percent higher than those from neighbouring countries like Thailand and Vietnam due to high production costs and small production scale. “I believe Indonesian exports [of frozen fruits and vegetables] could increase if we could push down the production costs, as [Indonesian products] are more reliable and are of better quality than products from Thailand and Vietnam,” Kasugai said during an online discussion held by the Indonesian Trade Promotion Center (ITPC) Osaka.

Indonesia has been struggling to capture a larger horticultural market share in Japan despite having a bilateral trade deal in the form of the Indonesia-Japan Economic Partnership Agreement (IJEPA), which exempts fruit products including bananas and pineapples from tariffs, within determined quotas. Indonesia exported US$30 million worth of horticultural products to Japan in 2019, accounting for only 0.46 percent of Japan’s $5.79 billion horticultural product imports.