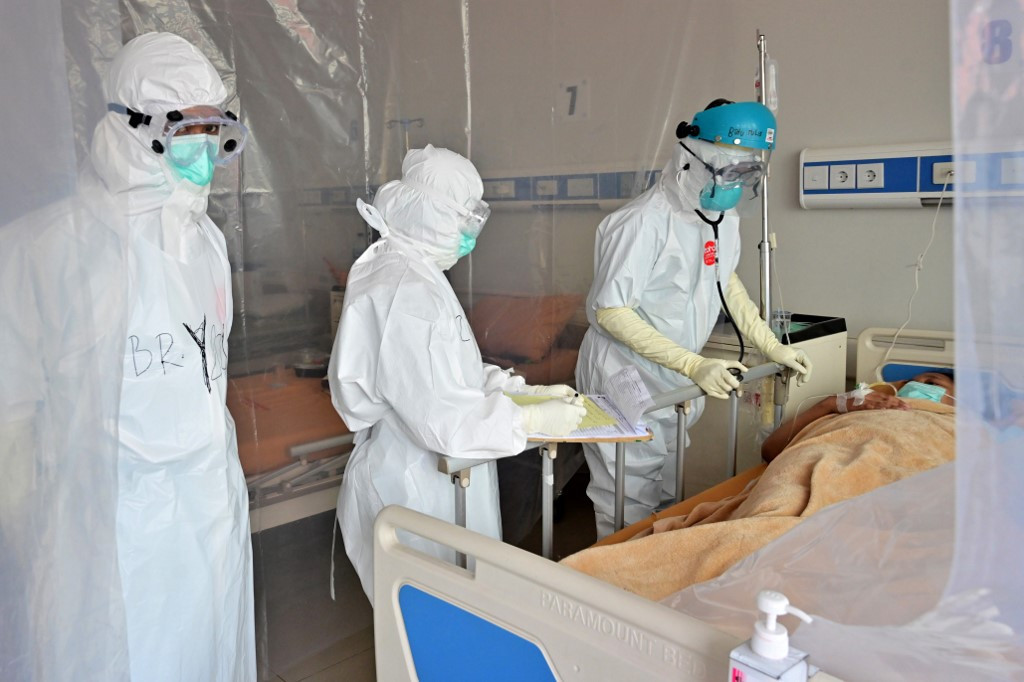 Benny explained that using PPEs as props would raise awareness about the importance of implementing health protocols during the campaign period and to prevent the emergence of new COVID-19 clusters.

“Distributing campaign props, such as masks, hand sanitizers, soap, face shields and hand washing equipment, can be considered a strategy in tackling COVID-19,” Benny said in a written statement on Wednesday.

Benny pointed out that all campaigns must comply with General Elections Commission (KPU) Regulation No. 13/2020 concerning holding the regional elections amid the pandemic.

Defense Minister Prabowo Subianto and the House of Representatives Commission I are discussing a draft bill on the ratification of a Indonesian-Swedish defense cooperation agreement. This agreement was previously signed by the defense ministers of the two countries in December 2016.

Prabowo said the Swedish government had endorsed and ratified the agreement through a diplomatic note on Oct. 11, 2017, but the agreement was not yet effective because Indonesia had not ratified it.

Therefore, Prabowo submitted the bill on Wednesday, hoping that it would be deliberated and passed as soon as possible. It is expected that this cooperation between Indonesia and Sweden will open up opportunities for Indonesia to develop its defense sector.

The National Federation of Trade Unions (KSPN) says it has instructed its members not to take part in a national strike set to be held on Oct. 6-8 to oppose deliberations on the omnibus bill on job creation.

Five million workers planned to stage a strike as the House of Representatives and the government concluded the deliberation of labor issues in the bill on Sunday, abandoning an earlier plan to drop the articles.

The House is expected to hold plenary sessions to pass the bill into law.

The federation said in a statement on Tuesday that joining the strike was not necessary as its members had already provided critical advocacy. It has also considered economic conditions during the COVID-19 pandemic.

Bank Indonesia (BI) recorded a significant increase in cash and liquid assets in August as shown by a 13.3 percent year-on-year (yoy) increase in broad money (M2) to Rp 6.7 quadrillion (US$452.9 billion), higher than in July at 10.5 percent yoy.

BI spokesperson Onny Widjanarko said the increase was driven by a 28.8 percent yoy jump in rupiah demand deposits. Meanwhile, cash in circulation grew slower in August at 6.2 percent yoy to Rp 661.2 trillion from the previous month of 7.8 percent yoy.

The State-Owned Enterprises (SOE) Ministry is planning to liquidate 14 SOEs that have been inactive and have not contributed much to state coffers. House of Representatives Commission VI member Achmad Baidowi, overseeing trade, industry and investment, said liquidation was not a failure for the SOE Ministry, but the liquidation process should be done under House supervision.

“[The ministry] needs to issue clear information to the public. It is still unclear which SOEs those 14 are,” Abra said.

President Joko “Jokowi” Widodo will continue development on the 95-kilometer Gilimanuk-Mengwi toll road in Bali, the second project after the Bali Mandara toll road in the southern part of the island. The project will be offered to investors through market sounding by the Public Works and Housing Ministry.

The ministry’s infrastructure financing director general, Eko Djoeli Heripoerwanto, said two projects were being offered to investors. One is the Gilimanuk-Mengwi toll road project worth Rp 19.36 trillion (US$1.3 billion). Another is a replication of the Callender Hamilton Bridge in Java worth Rp 2.36 trillion. The toll road project will be done under a public private partnership (PPP) scheme.