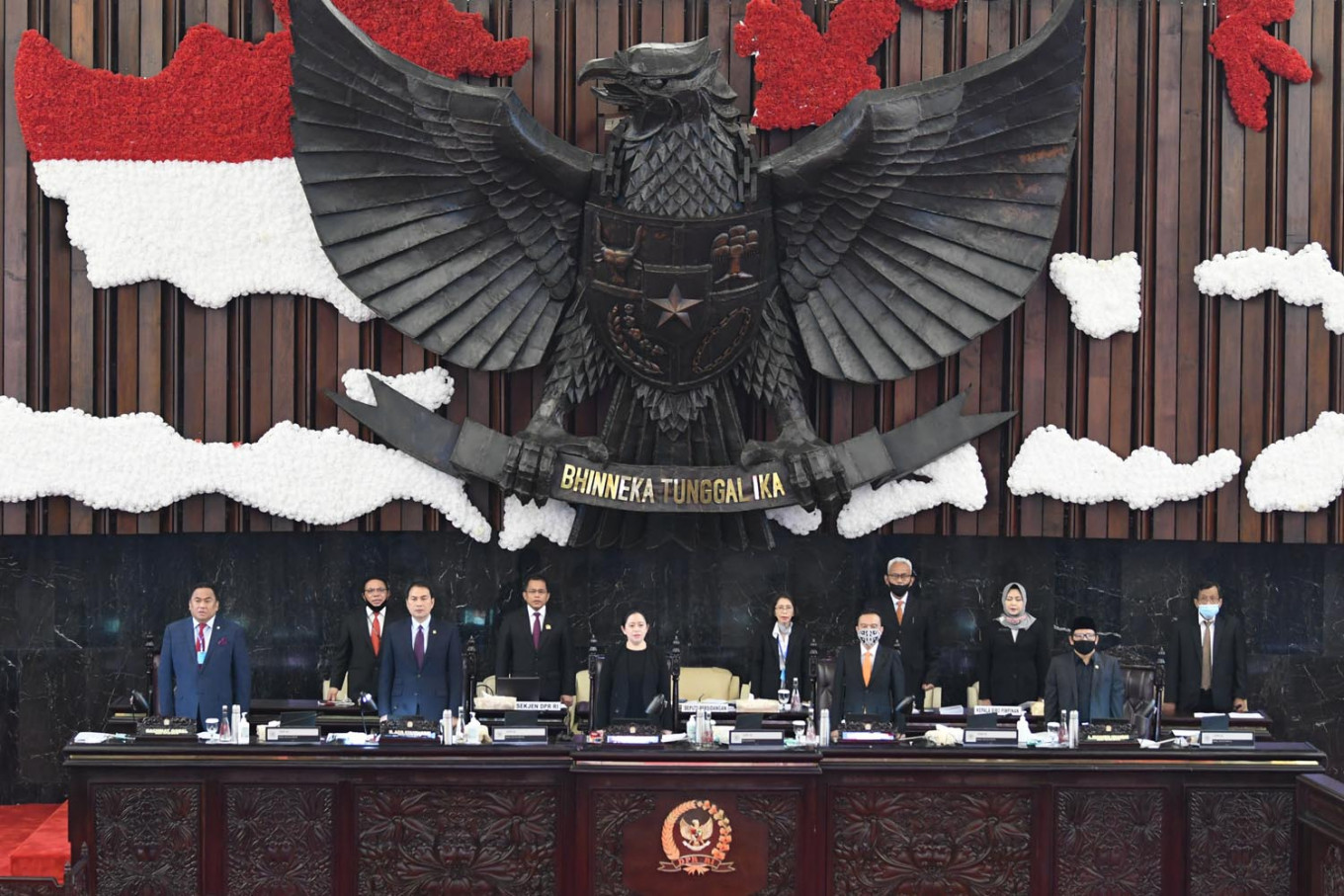 The House of Representatives said on Tuesday that it would send the copy of the Job Creation Law to President Joko "Jokowi" Widodo on Wednesday, after causing public confusion for more than a week over which draft was the correct one.

Out of four final drafts circulating in public, the House said it would send the latest one, the 812-page long one. The earlier drafts contain 1035, 1052 and 905 pages, respectively. The one uploaded to the House website, meanwhile, is one from before the House's Legislation Body (Baleg) finalized it, which is 1,028 pages long.

"The deadline for us to submit this Job Creation Law is Oct. 14, to be exact tomorrow at [midnight]," Azis Syamsuddin, a House deputy speaker, said in a press conference on Tuesday. He said the final draft he had was the 812-page one. "The law itself is only 448 pages, [which] plus explanations becomes 812 pages....," he said.

As of Monday afternoon, the House has yet to distribute copies of the law in an official manner. Meanwhile, President Jokowi in his first public comment on the passage of the law on Friday said that criticism of the law was merely based on “disinformation and hoaxes spread through social media.”

State-owned pharmaceutical company Bio Farma said it will not burden the government in determining the price of the COVID-19 vaccine.

“The price will be set at around Rp 200,000. We are committed to supporting the government’s efforts in providing the COVID-19 vaccine at an affordable price to protect the Indonesian population,” said Bio Farma president director Honesti Basyir in an official statement on Tuesday.

This was conveyed in response to news reports that Sinovac had signed a vaccine procurement contract with Brazil that would sell it for US$1.96 (Rp 28,939) per dose. Sinovac is carrying out clinical trials of the vaccine in China, Indonesia, Brazil, Turkey, Bangladesh and Chile.

“We have clarified information on the pricing of the COVID-19 vaccine in Brazil to Sinovac. Sinovac confirmed that information about a purchase contract for 46 million doses valued at US$90 million (Rp 1.33 trillion) with the Brazilian government is incorrect,” Honesti explained.

According to Honesti, Sinovac said there were several factors in determining the price for the vaccine. One factor is investment in phase 3 clinical trials, especially in large-scale efficacy trials.

“Thus, the COVID-19 vaccine pricing scheme in Indonesia cannot be equated to that of other countries,” he added.

A survey initiated by LaporCOVID-19 (Report COVID-19), together with various other institutions, found low public interest in COVID-19 drugs and vaccines being developed by the government.

The survey referred to the medicine being developed by Airlangga University (Unair), the State Intelligence Agency (BIN) and the Indonesian Military (TNI) as well as Sinovac Biotech’s vaccine, in partnership with Bio Farma, which is currently undergoing clinical trials.

One of the researchers, Dicky Pelupessy, said that the involvement of BIN and the TNI may have contributed to the respondents’ doubts, which may be due to the assumption that an intelligence agency and the military do not have the scientific expertise to develop a drug.

Another researcher, Irma Hidayana, said that the respondents’ rejection and doubt concerning the Sinovac vaccine was reasonable, as 40 percent of respondents think that the vaccine development process requires a longer time.

The survey accommodated 2,109 respondents of various ages, educational backgrounds and occupations from 34 provinces.

The government has warned that multiple disasters may occur at the end of this year with the rainy season approaching, compounded by the periodic weather phenomenon La Niña.

“Starting this October, a lot of heavy rain has been forecasted. Landslides could occur and there may even be earthquakes and a tsunami,” said Coordinating Maritime Affairs and Investment Minister Luhut Pandjaitan on Tuesday.

Luhut asked the public to heed every warning issued by the Meteorology, Climatology and Geophysics Agency (BMKG). On the same occasion, BMKG head Dwikorita Karnawati said that over the next three months, all regions in the country, except Sumatra, would be seeing heavy rainfall.

Prabowo to visit US for first time in decades
The Jakarta Post, p. 1

Nearly one year after being appointed defense minister by his political rival, former Army general Prabowo Subianto is leaving for the United States this week to meet his US counterpart Mark Esper; quite a diplomatic achievement after years of being barred entry to the country.

Prabowo had long been banned from visiting the US because of allegations of human rights abuses. He was included in a blanket ban on the Army’s Special Forces (Kopassus) for alleged human rights violations in then-East Timor when the territory was under Indonesian rule.

The minister talked about the five-day visit to the US starting on Thursday in a video released by the Gerindra Party on Tuesday, confirming that he was accepting the invitation because he considered the US an important country.

"America is an important country and I was invited, so I must fulfill the invitation," Prabowo said, "even though we will have a long journey, [especially with] the COVID-19 pandemic, we still have to respect [the invitation]."

The merger between three state-owned sharia banks will be done under a capital injection scheme with rights issues.  Bank BRI Syariah (BRIS) will become the surviving entity that receives additional capital from Bank Syariah Mandiri (BSM) and BNI Syariah (BNIS). According to SOEs Minister Erick Thohir, the merger is meant to help Indonesia become the center of sharia economy and finance.

Bank Mandiri will become the majority shareholder of the merged bank with more than a 50 percent stake, while Bank Rakyat Indonesia and Bank Negara Indonesia will each receive around 24 percent stake. With this arrangement, Bank Mandiri will have control over the new sharia bank and have the right to appoint the president director and board of commissioners.

As a result of the planned merger, the BRIS public shareholding will be diluted to only 1 percent from the previous 18.47 percent. Thus, BRIS will have to take corporate action to raise its public ownership to fulfil the Indonesia Stock Exchange’s 7.5 percent public ownership threshold.

The House of Representatives has finally made available the official version of the Job Creation Law to end public speculation over various draft versions that were circulated. The House deputy speaker Azis Syamsudin stated in a press conference that the official version contains 812 pages and guaranteed that no other articles will be sneaked in the draft.

Generally, the omnibus law is seen as a compromise between business and workers’ interests. It increases the ease of doing business while also providing better protection for workers. Despite the reduced severance pay, the omnibus law mandates that contract workers and outsourced workers also have a right to severance pay. Besides, there is also a new unemployment benefit scheme.

Indonesian Chamber of Commerce and Industry (Kadin) deputy chairwoman Shinta Kamdani said businesses had made a lot of compromises concerning the severance pay. Businesses will try to maximize the compromise while negotiating the supporting government regulation, she added.

Meanwhile, Indonesia Welfare Labor Confederation (KSBSI) president Elly Rosita Silaban is still against the omnibus law. They do not want severance pay to be reduced or have contract periods to be limited.

Bank Indonesia (BI) has taken quantitative easing measures by injecting liquidity into banks amounting Rp 667.6 trillion (US$ 45.04 billion) as of Oct. 9, 2020, to relax the domestic banks liquidity and subsequently reduce its interest rate.

The measure is mainly disbursed particularly through the monetary expansion of Rp 496.8 trillion and reserve requirements cut of  Rp 155 trillion. The liquidity injection also includes the 2020 state budget financing support by purchasing Rp 289.86 trillion of government bonds in the primary market.

BI Governor Perry Warjiyo explained that BI’s liquidity injection accounts for 31.23 percent of  the third-party fund in the banking system and this has lowered the overnight interbank money market (PUAB) interest rates to 3.29 percent in September 2020.

Perry said that the monetary expansion conducted by Bank Indonesia was in line with the fiscal stimulus acceleration by government to boost the national economy. BI has purchased Rp 289.86 trillion of government bonds as part of the central bank’s support to government budget financing.

Indonesia’s gross domestic product (GDP) is now expected to shrink by 1.5 percent this year rather than the 0.3 percent contraction the IMF had projected in June. The downward revision for Indonesia comes as the IMF has turned less pessimistic about the global economy, according to the October update of the World Economic Outlook, published on Tuesday.

Indonesia’s economic state remains precarious because of the continuing spread of the pandemic and the adverse impact on severely affected sectors, such as tourism, the Washington-based institution said. “

The IMF projection is largely in line with the government’s estimate for a full-year contraction of 0.6 percent to 1.7 percent made in late September, down from GDP growth of 5.02 percent in 2019. Indonesia’s GDP was down 5.32 percent year-on-year (yoy) in the second quarter due to falling household spending and investment, with economists and government officials projecting another contraction in the third quarter, which would mark a recession.

The global economy, meanwhile, is expected to shrink by 4.4 percent this year, a less severe contraction compared to the IMF’s previous estimate of 4.9 percent, due to better-than-expected second-quarter GDP data in countries where activity began to improve after lockdowns and signs of rapid recovery in the third quarter.

Agrarian and Spatial Planning Minister Sofyan Djalil said the ministry was finalizing the draft government regulation on the establishment of the land bank as mandated by the newly-passed the Job Creation Law. Sofyan said the land bank would be established by end of this year.

Sofyan explained that the land bank would be led by a committee of three ministers, including himself. But the bank’s board of directors would be filled by professionals. The bank would likely start its operation next year, when the bank had land under its management. The bank would open its offices in provinces where it had land assets.

Under the omnibus law, the land that would be managed by the land bank includes expiring concession areas with licenses that had not been extended or concession land that had been neglected for two years.

Agrarian Reform Consortium (KPA) secretary-general Dewi Kartika, however, disagreed with the planned establishment of the land bank, arguing that the land bank would serve the interests of businesses. Therefore, KPA would file judicial reviews on the omnibus law’s articles on the land bank.