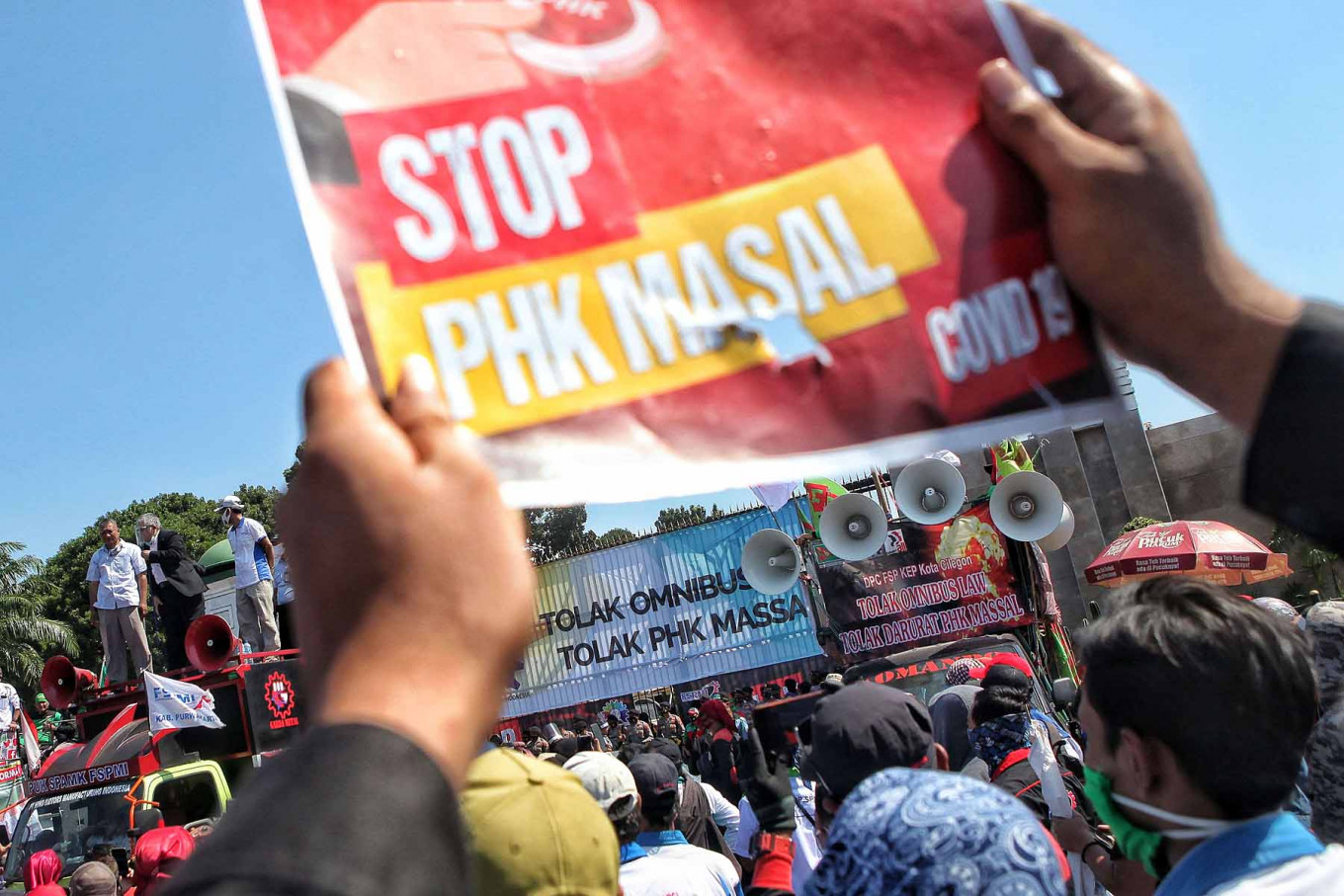 Workers stage a rally in front of the House of Representatives’ complex in Senayan, Jakarta, on Aug. 25. They opposed the omnibus bill on job creation and called for the government to do more to prevent mass layoffs during the COVID-19 pandemic. JP/Seto Wardhana(JP/Seto Wardhana)

The House of Representatives Legislation Body (Baleg) and the government have agreed to pass the controversial omnibus bill on job creation during the House’s next plenary session, which is on Oct. 8, despite significant opposition from members of the public — particularly labor groups — in recent months.

Two other factions — the Democratic Party and the Prosperous Justice Party (PKS) — objected to the bill, he said.

Coordinating Economic Minister Airlangga Hartarto, who was present at the meeting, said the government appreciated the speedy and “transparent” deliberation of the bill.

Congress Alliance of Indonesian Labor Unions (KASBI) chair Nining Elitos said the hasty and largely “clandestine” deliberation of the bill had left the organization no choice but to voice its opposition one last time, regardless of the result.

Activist Lini Zurlia said the protests throughout next week would take various forms, including strikes that would culminate in mass protests in front of the House complex in Senayan, Central Jakarta, and regional administration offices across the country on the day of the plenary session.

During the first week of campaigning for the 2020 simultaneous regional elections, a number of candidates violated COVID-19 health protocols while hosting face-to-face events, the Elections Supervisory Agency (Bawaslu) has said.

Bawaslu announced that an undisclosed number of candidates in 53 regencies and cities had hosted campaign events either without physical distancing and mask-wearing or with more than 50 people in attendance from Sept. 26 to Sept. 30. Bawaslu said it had dispersed the events, which were in violation of a General Elections Commission (KPU) regulation.

Election activists and health experts have repeatedly criticized the government for insisting on going ahead with the regional races as scheduled in December despite the public health risks. They have demanded postponement, warning of low voter turnout that could undermine the electoral process.

The outcry was amplified after Bawaslu found last month that 243 prospective candidates had violated health protocols by bringing large entourages to register their candidacies at regional KPU offices from Sept. 4 to 6.

The Presidential Palace has denied reports that President Joko “Jokowi” Widodo was planning to appoint more deputy ministers following the issuance of Presidential Regulation (Perpres) No. 95 on the Manpower Ministry and Perpes No. 96 on the Cooperatives and Small and Medium Enterprises Ministry, which stipulate deputy ministerial posts in the respective ministries.

State Secretary Pratikno explained that, while deputy ministerial posts were stipulated in several institutional Perpres, the appointment of deputy ministers was still the President’s prerogative.

President Joko “Jokowi” Widodo has claimed that the country’s COVID-19 mitigating efforts were going well, as the nation enters its eighth month of the outbreak and has confirmed more than 300,000 cases.

“For the past seven months, Indonesia has proved that we can handle the [COVID-19] problem. It is not perfect, but we can handle this together,” Jokowi said in a video posted on the Presidential Secretariat’s YouTube channel on Saturday night. “I can say that COVID-19 handling in Indonesia is not that bad. In fact, it is quite good.”

Jokowi said that the figure in October had passed the global recovery rate on 74.43 percent.

While recent reports have called the reliability of polymerase chain reaction (PCR) tests into question, experts agree that they remain the best tests for COVID-19 but acknowledge that various factors affect results.

Recently, the State Intelligence Agency (BIN), whose significant involvement in the country’s pandemic response has raised questions and criticism from civil society organizations, rejected a report by Tempo magazine that its PCR tests were inaccurate.

The BIN, which has received Rp 5.57 trillion (US$374.73 million) of the COVID-19 response budget, said false positives and negatives were found in other countries as well and that several factors affected test results among different labs.

Experts told The Jakarta Post it would only be fair to compare test results if samples were taken at the same time and were sent to different labs that had the same PCR settings.

Aryati, a clinical pathology professor from Unair who chairs the Indonesian Association of Clinical Pathology and Laboratory Medicine Specialists (PDS PatKLIn), said the testing work required great attention to detail, from taking the samples properly to pipetting materials and processing the tests. “Without caution, there could be contamination,” she said.

The omnibus bill on job creation is waiting to be passed after the government and the House of Representatives reached an agreement in the first deliberation phase. The bill is scheduled to be passed in a plenary session this week and hoped to become a stepping stone for improving Indonesia's business climate, particularly for post-COVID-19 economic recovery.

The government believes that this bill will boost investments and create more employment opportunities. Similarly, businesses hope that this bill will help Indonesia in facing the new normal. Meanwhile, economists forecast the bill’s benefits won’t be felt in the short term.

The bill still faces opposition from the Democratic Party and the Prosperous Justice Party (PKS) factions. Several labor unions are also against the provisions on wages, pension fund calculation and outsourcing.

Coordinating Economic Minister Airlangga Hartarto said the omnibus bill on job creation prioritized the protection of workers as well as micro, small and medium enterprises (MSME). Therefore, he said, workers and MSMEs should not be worried about the bill’s impending passage into law.

The House of Representatives Legislation Body (Baleg) and the government have agreed during a work meeting on Saturday to pass the bill into law in the next plenary session, namely on Oct. 8.

Airlangga explained that the job creation bill would accelerate regulatory reform and simplify the bureaucracy, so that government services would become more efficient. So far, Airlangga said, investment and job creation had been hampered by complex and lengthy procedures for business permits as well as difficulties in land acquisition and suboptimal MSME empowerment.

He added that the Job creation bill would help businesses, particularly MSMEs, boost investment and create more jobs to respond to rising job demand and said the deliberation process had been implemented in a transparent manner.

The Chamber of Commerce and Industry (Kadin) and the Indonesian Employers Association (Apindo) support the job creation bill, arguing that it could support the national economic recovery from the COVID-19 pandemic and create more jobs in labor-intensive industries.

Entering the fourth quarter of 2020, the stock market is shrouded in negative sentiment. The Jakarta Composite Index (JCI) is forecast to go sideways until the second week of October. It dropped 0.87 percent to close at 4,926.73 points on Friday, making it the third-worst index in Southeast Asia. It is down 21.79 percent since the beginning of the year.

Domestically, investors’ attentions are pinned on the omnibus bill on job creation, which was approved by the government and the House of Representatives on Saturday. The controversial bill has led to threats of nationwide strikes by several labor unions. In addition, market players are waiting anxiously for the data on whether the country’s recession would be as estimated or worse than the market’s expectation, especially as the pandemic is still looming large.

Globally, news that US President Donald Trump has been infected with COVID-19 amid the upcoming presidential election has become another concern for investors.

Ekuator Swarna Sekuritas research head David Sutyanto forecasted that the JCI would move sideways in the first two weeks of October and rebound in the third week. He estimates that, if in the third week the JCI could pass MA100 at 4,994 points, the index could rise to 5,140 points, since the index historically has been going up in October.

Celullar operator PT Telkomsel’s planned investment in homegrown super-app PT Aplikasi Karya Anak Bangsa, or Gojek, is said to be almost finalized. However, analysts and economists have different views on the US$150 million transaction the subsidiary of state-owned telecommunications company PT Telkom is pursuing.

Institute for Development of Economics and Finance (Indef) economist Bhima Yudhistira, for example, sees the plan positively, as it could maintain Gojek driver-partners as Telkomsel’s loyal customers. Furthermore, Gojek’s market is expanding, helping Telkomsel expand its customer base as well as giving it access to its big data so Telkomsel could target the right customers.

However, according to Indonesia ICT Institute executive director Heru Sutadi, the transaction is not lucrative for Telkomsel, as Gojek has too many investors already. Therefore, Telkomsel would not get much in return.

Sharing the same sentiment, PT Anugerah Mega Investama Hans Kwee said Telkom is already able to access Gojek customers’ data since most of them use Telkomsel already, so the benefit of the investment is questionable.

Chevron has signed a deal with the Upstream Oil and Gas Special Regulatory Task Force (SKK Migas) to drill between 112 and 118 new wells in Indonesia’s second-most productive oil block, Rokan Block in Riau.

The California-based oil company is slated to invest around US$150 million for the new wells, which, once drilled, would raise the block output by around 5,000 barrels per day (bpd), said SKK Migas head Dwi Soetjipto on Wednesday.

SKK Migas previously ordered Chevron to drill 11 new wells in the block this year. The remainder will be drilled in 2021. The exact number of wells and investment is projected to be finalized within 30 days.