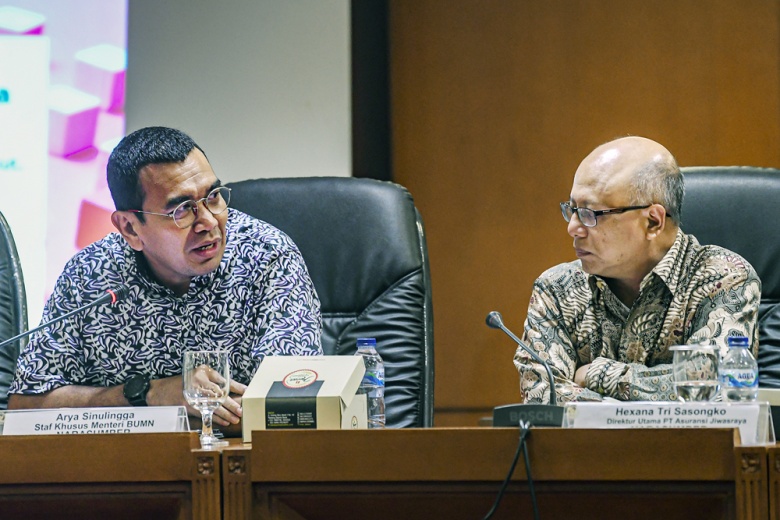 While seeking to clear his name in a promotion-rigging case plaguing the Religious Affairs Ministry, United Development Party (PPP) former chairman Muhammad “Romy” Romahurmuziy disclosed that a former Corruption Eradication Commission (KPK) Commissioner once sought his support to gain a position in the antigraft body.

Romy – once an ally of President Joko “Jokowi” Widodo – read out his defense statement during a hearing at the Jakarta Corruption Court on Monday. He stands accused of influencing Religious Affairs Minister Lukman Hakim Saifuddin to promote two officials, who allegedly gave Romy Rp 300 million (US$22,000) in return for his support.

Romy has challenged the accusations, claiming he simply made recommendations to Lukman. To prove his point, Romy revealed an encounter he had with a former KPK commissioner in 2015.

Romy said the individual had sought to use Romy’s influence as PPP chairman to convince lawmakers to vote for them as a KPK commissioner for the 2015-2019 period.

The country’s two largest parties, the Indonesian Democratic Party of Struggle (PDI-P) and the Golkar Party, have proposed reinstating the close-list proportional voting system and indirect regional elections, which many fear will strengthen elite dominance at the expense of people’s sovereignty.

PDI-P politician Djarot Saiful Hidayat claimed the close-list proportional voting system would strengthen the role of political parties as the most important pillar of democracy. “We encourage an election [system] based on party power because electoral candidates are [from] political parties,” he said.

Likewise, Golkar deputy chairman Ahmad Doli Kurnia said the political system would not only strengthen party institutions, but also the recruitment of candidates, which would be made open and transparent. Therefore, according to Doli, the Election Law must be revised in tandem with a revision of the Political Party Law.

The National Police has assured the Corruption Eradication Commission (KPK) that it will provide assistance to arrest Indonesian Democratic Party of Struggle (PDI-P) politician Harun Masiku, who has reportedly been seen in Singapore.

National Police spokesman Brig. Gen. Argo Yuwono said Indonesian police would seek a help from their Singaporean counterpart through mutual legal assistance scheme to locate Harun. “Singapore does not have an extradition treaty with Indonesia. However, we do have Law No. 1/2006 concerning mutual assistance in criminal matters, so we will communicate with Singapore,” Argo said.

However, Koran Tempo reported Harun left for Singapore on Jan. 6, 2020 but only stayed overnight and has since returned to Jakarta, allegedly on a Batik Air flight.

The ruling coalition will discuss the possibility of increasing the parliamentary threshold from the current 4 percent to 5 percent, as proposed by the Indonesian Democratic Party of Struggle (PDI-P). “All 10 parties in the government coalition, including Gerindra, will openly discuss the issue,” said United Development Party (PPP) secretary-general Arsul Sani, whose party disagrees with the plan.

The PDI-P has also sought to change the legislative seat allocation to three to 10 seats for provincial and city legislative councils, and three to eight seats for the House of Representatives. The party claims the changes will lead to a more effective government.

The Prosperous Justice Party (PKS), the sole opposition party, has expressed support for increasing the parliamentary threshold. “The PKS agrees to the increase, which is reasonable and gradual,” PKS lawmaker Jazuli Juwaini said.

Jakarta Governor Anies Baswedan has been the subject of public debate since the widespread flooding that claimed 16 lives hit the capital at the beginning of 2020. Following the floods, hashtags such as #JKTBergerakTurunkan4nies (Jakarta moves to demote Anies) and its counter hashtag #JagaDanKawalAnies (guard and escort Anies) appeared on Twitter following two opposing protests, by those condemning and those supporting Anies, staged at the same time on Tuesday outside City Hall.

Jakarta Bergerak (Jakarta moves) coordinator Siska Rumondor said anti-Anies protesters – reportedly unaffiliated with any organizations – demanded the governor step down from his position because of his inability to lead Jakarta.

“We are trying to deliver [the message] that Anies Baswedan is incapable of performing his duties, not only regarding the flood [mitigation efforts] but also about what he has not done to improve the welfare of residents. Many promises have not been fulfilled,” she said during the protest.

Protesters who supported Anies came on behalf of various groups such as Bang Japar Legal Aid Foundation and the Betawi People’s Communication Forum (Forkabi). “Why only blame Anies while many cities also suffered from floods?” one speaker said.

The House of Representatives will set up working committees tasked with investigating alleged corruption at state-owned insurer Asuransi Jiwasraya, following the company’s default on policies that fell due for payment last year.

House Deputy Speaker and Gerindra Party lawmaker Sufmi Dasco Ahmad was among the first to talk about the plan, saying the House would ask related commissions to set up working committees and look more into the case.

House Commission VI overseeing state-owned companies, for example, will look into the performance of Jiwasraya and another state-owned insurance firm Asuransi Sosial Angkatan Bersenjata Republik Indonesia (Asabri) while Commission XI overseeing financial affairs will work to ensure affected policyholders get their money back.

Meanwhile, a working committee under Commission III overseeing legal affairs will monitor the work of the Attorney General’s Office (AGO) and other law enforcers in investigating the case.

The government has maintained that its labor market reforms, which will be covered in the upcoming omnibus bill on job creation, will continue to protect labor as unions and students take to the street against the proposed new legislation.

Coordinating Economic Minister Airlangga Hartarto clarified on Wednesday that contrary to the protests, the existing minimum wage and severance pay system would remain. In fact, the government would be implementing more protection measures for laid-off workers, he added.

Airlangga claimed to have had dialogue sessions with seven labor confederations and 28 other unions and “in principle almost all confederations accept this omnibus bill”. The government will finalize the omnibus bill on job creation this week, expecting it to be included in the House of Representatives’ National Legislation Program (Prolegnas) this month, he added.

On Monday, hundreds of people representing seven labor unions and organizations, including student groups, under the auspices of the Labor with the People Movement (Gebrak) expressed their opposition to the omnibus bill in front of the House building in Jakarta.

The narrowing of Indonesia’s trade deficit had little impact on economic growth in 2019 because the country's exports remained weak, economists have said.

University of Indonesia rector Arie Kuncoro said the trade tensions around the globe had resulted in a lack of demand for Indonesian products. The lower demand caused a decline in exports and imports especially of raw materials for the production of export-oriented goods.

“The lowering of the trade deficit has not had much impact on the country’s economic growth,” Arie told The Jakarta Post, adding that domestic spending, not exports, was the main factor behind boosting economic growth to 5.1 percent in the fourth quarter of last year.

Economists consider the government’s programs to alleviate poverty to be ineffective as less than a million people were lifted out of poverty in 2019 despite significant spending on the programs.

Statistics Indonesia (BPS) recorded Indonesia’s poverty rate at 9.22 percent, as of September 2019, almost unchanged from the 9.66 percent recorded in September 2018.

Similarly, BPS also recorded a slight improvement in the inequality of income in the country, as indicated by the decline in the Gini ratio to 0.380 as of September 2019 from 0.384 in September 2018.

Institute for Development of Economics and Finance (Indef) senior economist Enny Sri Hartati said on Wednesday that the government had spent Rp 369.1 trillion (US$26.36 billion) on social protection programs that aimed to alleviate poverty in the country. She said such large spending had been ineffective as only 880,000 people had been lifted out of people.

Bank Indonesia (BI) recorded lower foreign debt growth in November 2019, as the government and private sector repaid the principal due during the month and also borrowed less.

BI revealed on Wednesday that the country’s total foreign debt reached US$401.4 billion in November 2019, a 8.3 percent increase year-on-year (yoy). The growth, however, was lower than October’s figure of 12 percent yoy.

The central bank said the foreign debt level remained healthy as its ratio to the country’s gross domestic product (GDP) in November was 35.9 percent, relatively stable compared to the previous month, while about 88.5 percent of foreign borrowings were long-term debts.

In November, the combined debt of the government and the central bank amounted to $198.6 billion, an increase of 10.1 percent yoy, slowing from last October’s growth rate of 13.6 percent yoy.

BI attributed the slowing growth to the government’s efforts to repay its bilateral and multilateral loans that were due that month.

The remaining debts in November were held by the private sector, including state-owned enterprises (SOES), totaling $200.1 billion, a 6.9 percent increase yoy. The growth was lower than the 10.7 percent in October.