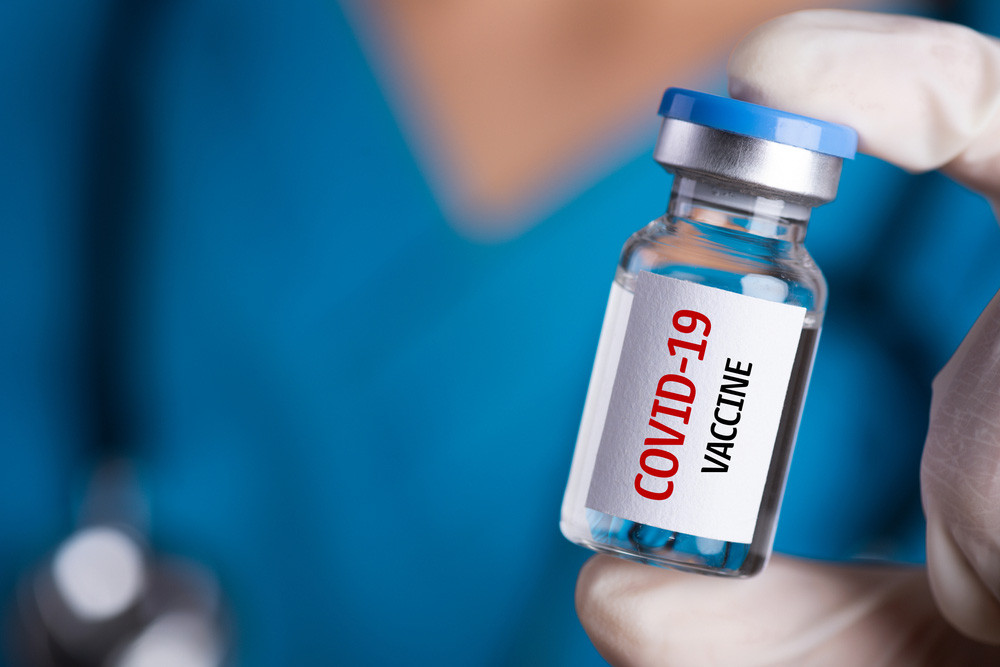 Female doctor with a stethoscope on shoulder holding syringe and COVID-19 vaccine. Healthcare And Medical concept.(Shutterstock/siam.pukkato)

State officials are embarking on an official trip to Europe this week to secure another supply of COVID-19 vaccines after the government finalized earlier deals with Chinese producers.

Foreign Minister Retno LP Marsudi and State- Owned Enterprises Minister Erick Thohir left the country with a team on Monday for official visits to London, as well as Bern and Geneva in Switzerland.

In August, Retno and Erick went on a similar trip to China and the United Arab Emirates, where they secured a supply of a potential COVID-19 vaccine in the ballpark of 300 million doses until the end of next year.

Retno did not specify which vaccine producers she and Erick would meet this week. However, Coordinating Economic Minister Airlangga Hartarto earlier said that the government was going to pay a down payment on vaccines from the United Kingdom’s AstraZeneca by the end of this month.

The East Jakarta District Court will begin today the trial of graft convict Djoko Tjandra in a case pertaining to the issuance of fake travel recommendation letters and other fake documents. East Jakarta District Court representative Ady Wira said that three suspects in the case would be present at the trial, namely Djoko himself, Djoko’s lawyer Anita Kolopaking and Brig. Gen. Prasetyo Utomo.

Djoko recently made headlines as he managed to return to the country undetected and request a case review over his conviction with the South Jakarta District Court in June. He reportedly filed his plea after obtaining a new e-ID card and passport, in addition to having his Interpol red notice status revoked.

Djoko was first arrested in September 1999 for his involvement in the high-profile Bank Bali corruption case. He was acquitted by the South Jakarta District Court in 2000.

The Jakarta Corruption Court has delivered a life sentence to three former executives of state insurer PT Asuransi Jiwasraya for their involvement in graft and money laundering that had resulted in trillions of rupiah in state losses.

According to the prosecution, Hary, Hendrisman and Syahmirwan had violated articles 2 and 18 of Law No. 31/1999, as amended by Law No. 20/2001 on corruption eradication, and Article 55 of the Criminal Code.

The National Association of University Student Executive Bodies (BEM-SI) has announced on behalf of university students across the country that it will continue to protest the newly passed Job Creation Law despite mounting pressure from the government.

BEM-SI called on the government to take responsibility for its claim that the protests against the controversial jobs law had been driven by disinformation that distorted the actual stipulations contained in the legislation product, group coordinator Remy Hastian said in a written statement on Sunday.

He called the government’s claim preposterous, considering that the House of Representatives and the government had failed to make the final legislation draft available to the public in the first place.

The association encouraged students and members of the public to keep pushing for the cancellation of the jobs law, urging them to be committed to the cause until the government responded to their aspirations.

State-owned Sharia banks are scheduled to sign a conditional merger agreement on Tuesday. Bank Syariah Mandiri, BNI Syariah and Bank BRISyariah will merge their sharia wing and create a jumbo sharia bank with total assets of Rp 214.78 trillion, which is almost half of the total sharia bank assets.

This merger aims to widen the outreach of state-owned sharia banks. “This merger is a necessity because it also increases competitiveness,” said the Financial Services Authority’s (OJK) board of commissioners chairman, Wimboh Santoso. Sharia finance holds a 9.03 percent market share. Besides, the merger will allow state-owned banks to avoid making redundant investments.

According to Kontan’s source, this merger will use a backdoor listing scheme. The merged sharia banks will be listed on the Indonesia Stock Exchange (IDX) under the code BRIS. Bank Mandiri will become the majority shareholder with more than 50 percent stake, followed by BRI and BNI. The merger is to be finished by February 2021 with the new name Bank Amanah.

Meanwhile, private sharia banks are also preparing to increase their competitiveness.  Bank BCA Syariah is finalizing its merger with Bank Interim, which would increase BCA Syariah’s capital adequacy ratio to 43.43 percent from 38.70 percent. Bank Syariah Bukopin is also rumored to be receiving capital injection from its parent company.

The 21 commodity groups consist of four groups of goods 17 groups of services. The groups of goods include mining goods, basic goods, food and beverages served by hotels or restaurants, and money, gold and bonds.

Taxation director general Suryo Utomo explained that the potential tax loss from the tax incentives has been considered in the revised 2020 state budget and the 2021 state budget. He is optimistic that the tax incentive will increase the tax ratio in the long term as the economy grows and number of businesses as well as tax compliance improve.

The government is hoping that the new tax incentives introduced in the recently passed Job Creation Law will help to grow the economy by attracting more investment and creating jobs.

The jobs law eliminates income tax on dividends earned in Indonesia and on certain income, including dividends earned abroad as long as they are invested in the country. It also introduces 10 percent value-added tax (VAT) on coal and relaxes administrative sanctions and taxes for foreigners with certain expertise.

The provisions in the omnibus law aim to complement several regulations in Law No. 2/2020, which was issued earlier this year to gradually lower the corporate income tax and impose VAT on services and goods sold in Indonesia by global technology companies, among other provisions.

Thirty-six technology companies appointed by the government to collect these taxes had paid Rp 97 billion (US$6.58 million) into the state coffers as of September, according to the tax office.

The government forecast the tax-to-GDP ratio to reach 8.57 percent this year as the country grapples with an economic downturn caused by the COVID-19 pandemic. The figure would be lower than last year’s rate of 12.2 percent.

The final version of the Job Creation Law has remained a mystery as several versions are circulating in public. According to House of Representatives secretary-general Indra Iskandar, the last version with 812 pages is the one that will be sent to President Joko Widodo on Wednesday. He said the changes made compared to the previous 905-page draft are merely formatting issues and not substantial.

However, there are eight changes in the labor provisions’ substance. The last draft now includes a regulation on block leave, sanctions for employees and workers, and clarification that the government will pay unemployment benefit (JKP) for a maximum of six-month salary.

Another controversial article regarding the maximum pension fund is also removed and replaced with “according to the rule.” Manpower Minister Ida Fauziah confirmed that the word maximum is not drafted to give room for employers who want to provide more severance pay.

The inconsistency in the Job Creation Law drafts has gained criticism from law experts and labor unions. Gajah Mada University law professor Maria SW Sumardjono also deemed that the Job Creation Law process does not fulfill the openness principle. Nobody can confirm which one is the final draft.

Inter-Factory Laborers Federation (FBPLP) deputy head Jumisih said that the ever-changing draft substance confuses the public and lead to the spread of misinformation in public. Workers will file a judicial review to the Constitutional Court while also pushing for executive review, legislative review, and more demonstration to protest the law.

The capital loan is a part of Rp 8.5 trillion loan with capital interest allocated by the government to save the state-owned airline as suggested by the House of Representatives commission overseeing state-owned enterprises (SOE). The fund is distributed through mandatory convertible bond (MCB) scheme.

Institute for Development of Economics and Finance (Indef) economist Bhima Yudhistira said the MBC scheme is the government’s strategy to increase its ownership over Garuda. “There is an intention to dominate shareholders […] Perhaps so it would be easier to manage the rescue,” he added.