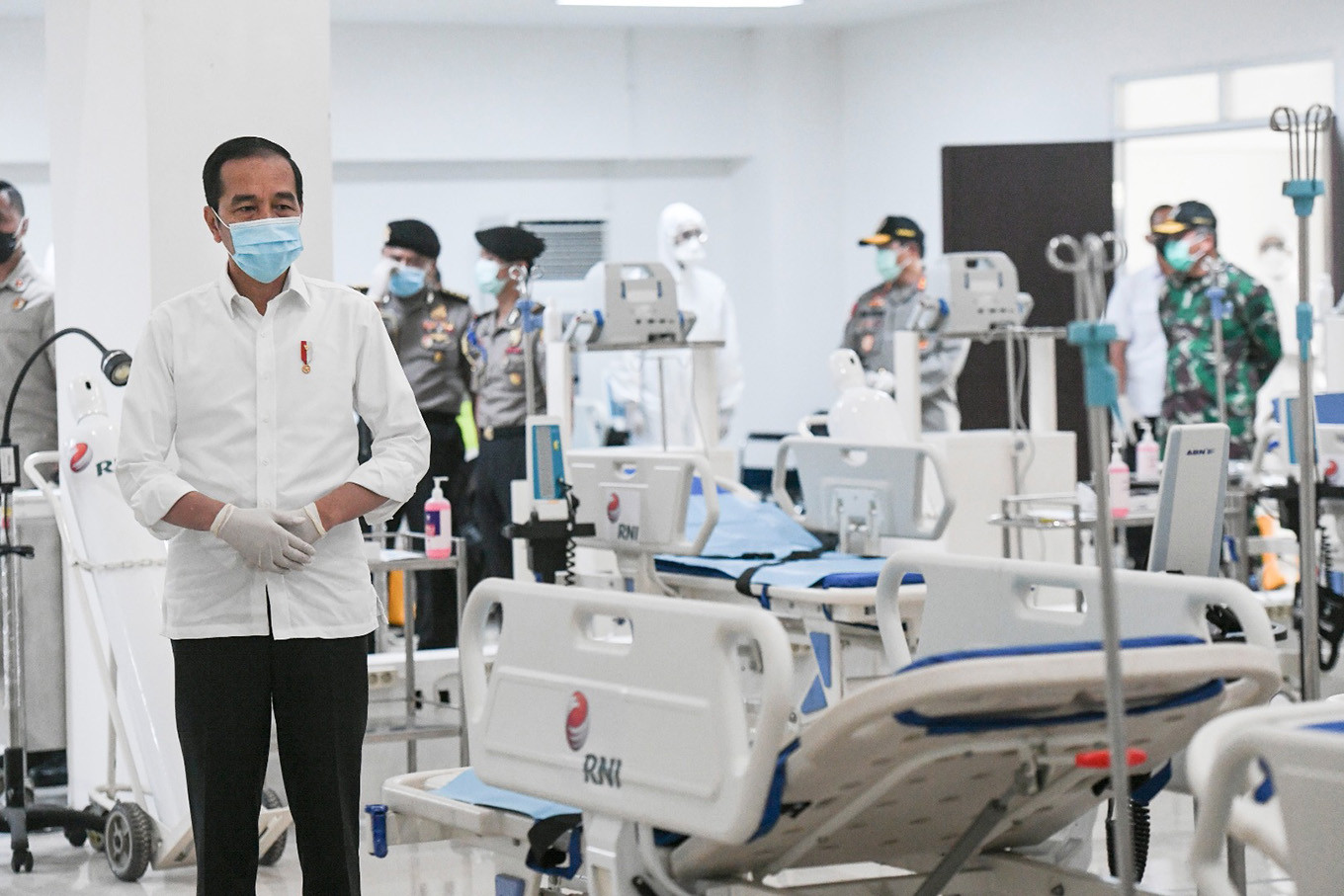 After receiving medical supplies from China, the country will conduct COVID-19 tests in Jakarta, West Java and Banten, focusing on vulnerable groups, including medical workers.

The government has distributed around 125,000 COVID-19 rapid testing kits by Tuesday, mainly to the three provinces hardest-hit by the pandemic. Jakarta has received 100,000 testing kits and West Java 20,000 test kits.

West Java Governor Ridwan Kamil said the tests in the country’s most populous province would be targeted at cities and regencies around Jakarta and Bandung, where most confirmed cases and deaths have been discovered. The areas include Bogor regency, Bogor city, Depok, Bekasi regency and Bekasi city — all part of Greater Jakarta.

“The test is not for all West Java residents. If someone is healthy, has no symptoms and does not work a high-risk profession, they don’t have to participate in the massive testing. Just stay at home and practice [physical] distancing,” he said.

The General Elections Commission (KPU) is still considering possible options in holding the 2020 regional simultaneous elections following the postponement of four preliminary stages of the elections due to the COVID-19 pandemic. Because revising the Regional Elections Law is a necessary step to reschedule voting day, President Joko “Jokowi” Widodo will then have to issue a governmental regulation in lieu of law (Perppu) first.

KPU commissioner Pramono Ubaid Tanthowi said a number of alternatives had been reviewed by the KPU, including merging the preliminary stages together into a single stage or postponing voting day altogether. The KPU is currently still reviewing these options.

As a consequence of the delay, the KPU has also issued instructions to all regional KPU leaders to freeze all ad hoc organizing bodies, including the District Election Committee (PPK) and the Voting Committee (PPS).

Education agencies in various regions are currently preparing an alternative assessment to replace the national exams, which were canceled amid the COVID-19 pandemic.

Depok Education Agency head Mohammad Thamrin said the agency would discuss an appropriate assessment model to replace the national exams. A small team made up of members from the agency, Mohammad said, will be in charge of formulating a new mechanism for assessing student grades.

“Our discussions are focused on final assessment mechanisms for junior high school and elementary school students. We still need to provide grades for those graduating,” Thamrin said on Wednesday.

Thamrin added that the results of the discussion would become a reference for education institutions across Depok city.

Police officers in various regions have begun carrying out patrols to disperse crowds in order to stem the spread of COVID-19. Patrols are carried out in accordance to edict No. Mak/2/III/2020 issued by National Police chief Gen. Idham Azis.

According to National Police Commission (Kompolnas) commissioner Poengky Indarti, the dissolution of crowds did not violate human rights as strict action must be taken to lower the risk of infection.

National Police spokesperson Brig. Gen. Argo Yuwono explained that anyone who did not adhere to the orders of the police officers dispersing would be subjected to Article 212, Article 214, Article 216 and Article 218 of the Criminal Code, potentially facing a penalty of up to one year and four months in prison.

Months of uncertainty regarding the hosting of the Tokyo Games came to an end on Tuesday evening after International Olympic Committee (IOC) chief Thomas Bach and Japanese Prime Minister Shinzo Abe agreed to postpone the Games until 2021, allowing countries to prioritize the well-being of their athletes.

The Youth and Sports Ministry announced it fully supported the move, saying in a statement that it was the best decision organizers could make during the global health crisis, which has put a lot of strain on efforts to ensure the safety of athletes and officials taking part in the quadrennial event.

“The ministry feels that all parties, including the Indonesian National Olympic Committee [NOC], the National Paralympic Committee [NPC] and all the heads of the sports federations, as well as the athletes who have prepared for the Games, can understand the decision, as the postponement […] not only affects Indonesia but all other countries as well,” it said.

The government, with support from the House of Representatives, needs to revise the 2020 budget to adjust to a potential economic crisis due to the coronavirus pandemic.

The budget revision is needed for several reasons. First, all assumptions in the budget are no longer relevant. The budget, for example, assumes that the rupiah exchange rate should stay at US$14,300 per US dollar while in reality, the rupiah has weakened to Rp 16,500. Also, the crude oil price has dropped to US$30 per barrel, way below the budget’s assumption of $63 per barrel.

Second, the focus of the budget, which is to boost economic growth, should also change in line with the current focus of the government to fight the spread of the coronavirus. The government has allocated more subsidies for poor people through cash transfers and other means such as health spending. This should be reflected in the revised budget.

Third, state revenues are expected to slow down in line with weakening local business activities, exports and imports and investment.

Meanwhile, Finance Minister Sri Mulyani said that the President would issue a government regulation in lieu of law to increase the budget deficit ceiling from 3 percent of gross domestic product (GDP), as stated in State Finance Law No. 17/2003.

President Joko “Jokowi” Widodo has revealed that government officials and legislators are in talks to raise Indonesia’s budget deficit cap, which would allow the state to borrow more money to fund emergency response measures to the coronavirus pandemic.

Jokowi told reporters on Tuesday that the government and the House of Representatives had been discussing raising the cap over the past few days. He has also held discussions with the Supreme Audit Agency (BPK).

“The point is, we want to relax the state budget and have the political support for when we issue the regulation in lieu of law [Perppu],” he said. Jokowi previously said the state budget should focus on three things: health care, the disbursement of social funds and economic stimulus.

The House – and several economists –previously urged the government to issue a Perppu to raise the deficit cap in the 2020 state budget plan.

The chairman of the House’s budget committee (Banggar), Said Abdullah, said on Monday that the government should raise the ceiling from the current 3 percent of gross domestic product (GDP) to 5 percent.

“Almost every macroeconomic indicator has changed significantly due to the spread of the COVID-19 pandemic. The 2020 state budget, as the government’s fiscal instrument, will no doubt change as well, he said after a teleconferenced meeting with Finance Minister Sri Mulyani Indrawati and Bank Indonesia Governor Perry Warjiyo.

The government has to go all out in dealing with the COVID-19 pandemic so that the country does not plunge into an economic crisis. If necessary, the government could expand the budget deficit by up to 6 percent of gross domestic product (GDP).

The government has increased the budget for the treatment of coronavirus patients, procurement of additional hospital beds and self-protective gear, rapid testing and incentives for medical workers. More than that, the government also needs to increase the budget to prevent people’s purchasing power from declining. Therefore, a bigger budget deficit ceiling is needed.

“This is a war situation. Anything can be carried out by the government to stop the spread of the coronavirus, treat the coronavirus patients and boost food subsidies for poor people,” said Emanuel Melkiades Laka, deputy chairman of the House of Representatives Commission IX on health care.

Melki suggested that the government revise the budget to allow more funding to fight against the spread of the coronavirus and treat patients.

Institute for Development of Economics and Finance deputy director Eko Listiyanto said the government and the House needed to sit down to revise the budget to fight the coronavirus.

In addition, Eko suggested that the revised budget should be directed toward preventing massive layoffs and, therefore, industries needed government support to cope with the impending crisis.

However, the distribution mechanism of the social assistance programs and the recipients need to be clarified so that the assistance reaches the intended targets. Indonesian Financing Companies Association (APPI) chairman Suwandi Wiratno said there was no regulation on how to provide loan installment payment relief for one year to small and medium enterprises.

Meanwhile, Indonesian Chamber of Commerce and Industry deputy chairman Shinta W. Kamdani said that the postponement of loan installments for one year would be enough to give enterprises room to manage their businesses. “We expect that after one year, the economy will return to pre-coronavirus levels.”

The State-Owned Enterprises (SOEs) Ministry has asked SOEs to issue bonds to help shore up the flagging rupiah, which dropped sharply in recent days amid growing fears over the worsening of the economic outlook due to the COVID-19 pandemic.

SOEs Minister Erick Thohir said he had asked several SOEs with good ratings such as Bank Mandiri, Bank Rakyat Indonesia (BRI) and state-owned oil and gas company Pertamina to seek funding through a bonds issuance to help strengthen the rupiah.

Erick said the ministry was still in talks with SOEs on the size of the bonds that could be issued. The minister also said the timing of the issuance should be carefully set, given the growing uncertainty in the global economy.