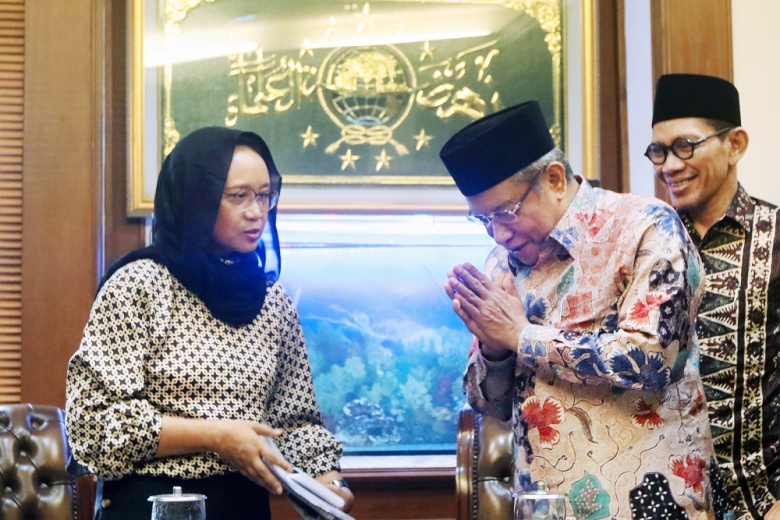 Mutual stance: Foreign Minister Retno LP Marsudi (left) meets with Nahdlatul Ulama (NU) chairman Said Aqil Siradj (center) at the NU headquarters in Central Jakarta on Tuesday. During the meeting, they talked about the fate of former fighters of the Islamic State terrorist group from Indonesia who were seeking repatriation. Said expressed his support for the government’s stance to not bring them home. (JP/Dhoni Setiawan)

The government has decided not to repatriate Indonesian sympathizers of the Islamic State (IS) group who are stranded outside the country, saying that it would prioritize the safety of the hundreds of millions of Indonesians at home against what a minister described as a “virus”.

The decision came after Coordinating Legal, Political and Security Affairs Minister Mahfud MD met with the representatives of other relevant authorities such as the National Counterterrorism Agency (BNPT), the Religious Affairs Ministry and the Law and Human Rights Ministry earlier on Tuesday, before presenting options to President Joko “Jokowi” Widodo in a closed-door Cabinet meeting later that day.

The death toll from the new coronavirus outbreak surged past 1,000 on Tuesday as the World Health Organization (WHO) warned that infected people who have not traveled to China could ignite a “bigger fire” in the epidemic, warning that the virus poses a very serious global threat.  Approximately 108 deaths were reported on Tuesday – the first triple-digit daily rise since the virus first emerged in late December.

An advance team for a WHO-led international mission arrived in China as the country struggles to contain the viral epidemic, which has now infected more than 42,000 and has spread to more than 25 countries.

“China is currently in a state of emergency because that is where 99 percent of the new coronavirus cases have been recorded. However, the virus has also become a serious threat to the rest of the world,” WHO chief Tedros Adhanom Ghebreyesus said.

President Joko “Jokowi” Widodo has expressed his appreciation for the ministries’ thorough and immediate handling of the novel coronavirus in Indonesia. With that, Jokowi has also asked that they continue to update the public on the virus.

“I believe this will heighten our awareness, cautiousness and efforts so that the virus does not enter Indonesia,” said Jokowi at Bogor Palace on Tuesday.

Jokowi explained that the primary goal of transparency in communicating with the public was to create a conducive environment. “I ask that the media continues to inform us [on the virus] in the morning, afternoon and night. Information disseminated needs to be backed with credible facts. The government also needs to maintain their seriousness in handling the coronavirus,” said Jokowi.

Ahmad has since asked Raka to uphold and maintain the integrity of the KPU as an institution that organizes elections, considering that the arrest of Wahyu for accepting bribes has weakened the public’s trust in the commission. “We had to immediately take care of the situation to uphold the commission’s credibility, especially with regional elections just around the corner,” said Ahmad.

As President Joko “Jokowi” Widodo has issued a presidential decree permanently dismissing Wahyu from his position at the KPU, Raka Sandi awaits confirmation of his inauguration at the KPU for the 2017-2022 period.

As the second day of the National Mandate Party’s (PAN) fifth national congress, held in Kendari, Southeast Sulawesi, took a rowdier turn, with water bottles and chairs were thrown around, injuring at least four people, observers have questioned the message conveyed to the public as a result of the incident.

“Although this chaos might be considered normal by party activists within PAN, from the people’s perspective, the chaos is quite scary,” said Adi Prayitno, a political observer from Islamic State University (UIN) Syarif Hiayatullah, Jakarta. According to Adi, as an institution that produces leaders for the nation, political parties have a responsibility to present democracy in an appropriate manner.

“You need to be cool-headed to face the dynamics of politics. Competition does indeed make you restless, but as much as possible, physical unrest should be avoided,” Adi added.

The omnibus bill on taxation aims to collect tax from online transactions, which are estimated to reach Rp 1.15 quadrillion in 2025. The government had planned to issue a similar regulation last year but cancelled it because of the general election.

E-commerce players have expressed their support for the government’s plan. However, they demand fairness. They said non-platform online transactions, such as ones taking place over WhatsApp, Instagram or Facebook, had also gained prominence in the digital marketplace and therefore should be taxed as well.

The Finance Ministry’s customs and excise director general, Heru Pambudi,  claimed that his office would regulate online transactions over social media. “There will be fairness, conventional retail is charged with tax and customs of almost 50 percent. Meanwhile, goods sold online might be cheaper because the sellers do not pay tax or duty,” he added.

The bill will charge value-added tax on all online transactions, on e-commerce platforms and social media. Sellers are now required to record, pay tax on and report all their transactions.

The novel coronavirus outbreak has slowed down China’s economic activity. Indonesia is affected by this in two ways. Coal, palm oil, iron and steel exports have gone down because of falling demand from China, while imports of garlic and raw material for medicine have becoming rarer because of deteriorating supply.

World Bank managing director for development policy and partnership Mari Elka Pangestu said since tourism and businesses were affected, to maintain economic growth of around 5 percent, the government should protect the domestic market and increase purchasing power.

During a Cabinet meeting on Tuesday, President Joko “Jokowi” Widodo advised his Cabinet to disburse the state’s budget to ministries and institutions in hopes of stimulating economic activity.

Finance Minister Sri Mulyani noted that government expenditure per Feb. 10 had gone up from the same period last year. A total of Rp 586 billion (US$42.89 million) in village funds had been disbursed, up from only Rp 317 billion last year. In addition, a conditional cash transfer of Rp 7 million for the Family Hope Program (PKH) had been disbursed out of the Rp 20 trillion budget this year.

Institute for Development Economics and Finance (Indef) economist Bhima Yudhistira expects household spending to remain the main economic growth driver this year. Although the government incentive would stimulate the economy, he hopes the government carries out efforts to increase investment.

A number of tax facilities stipulated in the taxation omnibus bill, such as a lower income tax rate for business entities, has led to Rp 80 trillion in potential state losses. As a mitigation effort, the government plans to widen the tax base.

For the expansion effort, the government plans to tax online transactions to improve fairness among taxpayers. Although the potential revenue from this tax might not be as big as the potential loss, the tax would create new tax base.

Whereas, for the intensification of collection from existing taxpayers, the government will simplify the tax system so as to not discourage new investment and improve compliance from small and medium enterprises.

The taxation omnibus bill aims to attract investment and boost economic growth. Therefore, it is expected that the tax revenue lost because of the bill could be replaced by new investment.

The government has once again been forced to postpone submitting an omnibus bill on job creation to the House of Representatives as it struggles to allay concerns among blue collar workers that the new legislation would undermine their rights.

Coordinating Economic Minister Airlangga Hartarto was scheduled to submit a presidential letter (Surpres) notifying the House about the deliberations over the bill, as well as the bill itself, on Tuesday, according to several lawmakers from the ruling coalition. The minister, however, failed to show up, leaving the lawmakers guessing about his no-show.

A number of prominent labor leaders interviewed by the Post said they still did not know the contents of the bill and would rally to oppose it. They fear the bill would reduce severance payments, enforce an hourly pay system to replace the minimum wage and eliminate sanctions against companies that fail to provide health insurance.

“Don’t forget countries in ASEAN market such as Vietnam and Myanmar, they are potential markets, also countries in South Asia,” he said.

Indonesia should also focus on importing exports to partner “accredited” countries where Indonesia has trade promotion centers (ITPCs). Non-oil and gas exports to accredited countries only reached 87.3 percent in August 2019. The government targeted exports to these countries to reach  90.1 percent. Indonesia is only expected to reach its trade target with Vietnam, Siwtzerland, Saudi Arabia, Hungary and Mexico.

International trade studies center (BP3) researcher Choirin Nisaa said Indonesia’s non-oil and gas export could be increased by focusing on products that have not gained prominence in the accredited countries but have the potential, such as swallow nest, fish, raw coconut oil, cigarette, essential oil, and manufactured products from rubber, wood, cacao, seaweed and coconut.